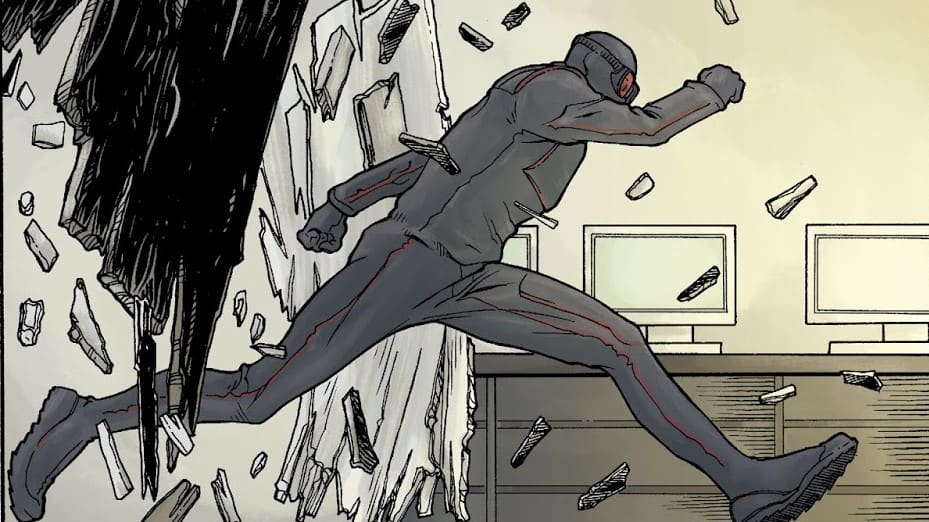 Welcome to the latest edition of Deathblow kills the DC Universe! In this corner we have the man himself, Deathblow, Michael Cray! Opposite him from the DC corner is the drug addled schizophrenic psychopath, Barry Allen! 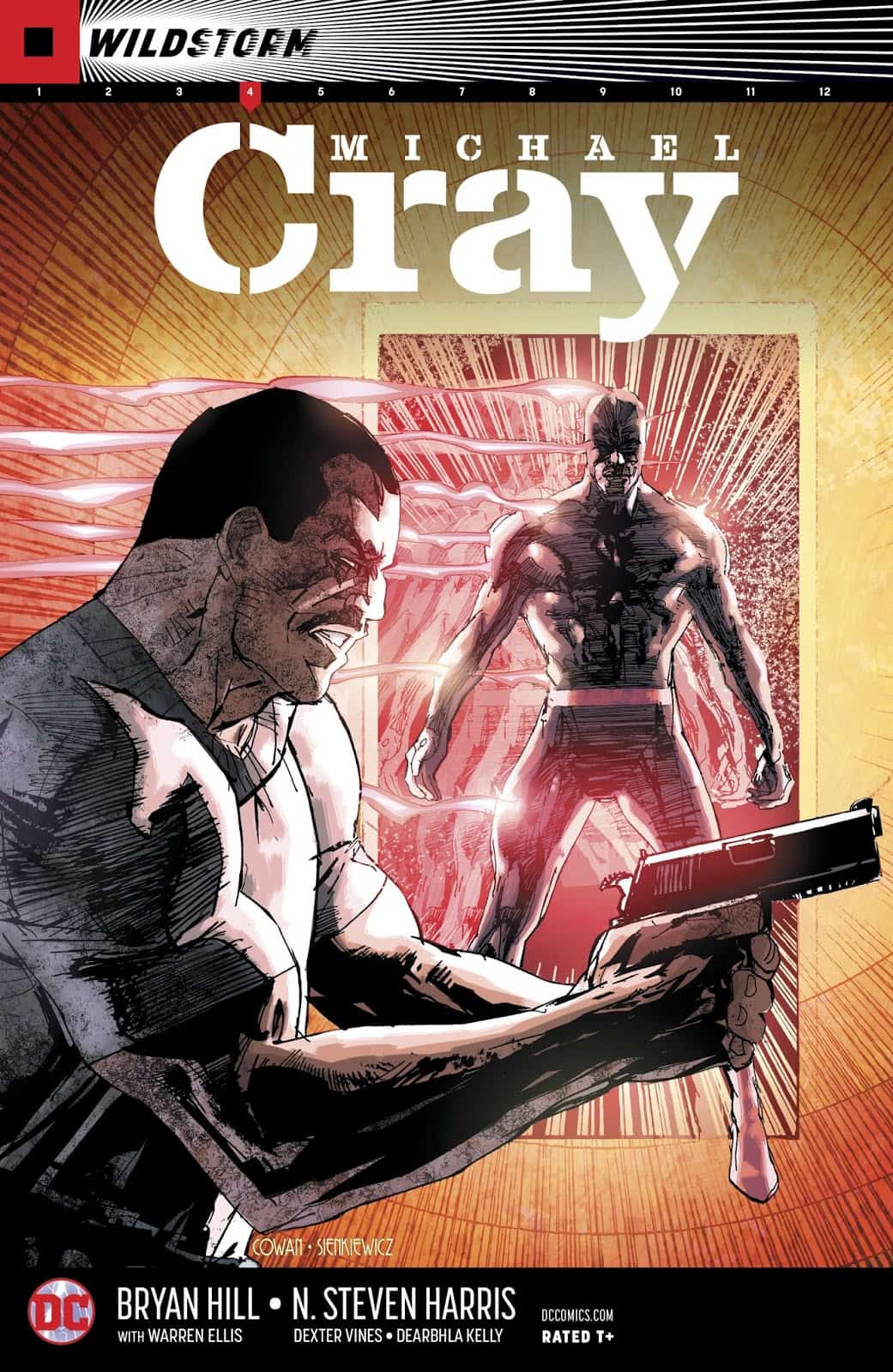 Basically, if you don’t have a solid working knowledge of Wildstorm going into this you’re out of luck in understanding it beyond the most basic level.

Michael Cray has been betrayed by IO (a big shadowy borderline organization that employed him previously) and been possessed by an alien or something in The Wildstorm, gaining metahuman powers in the process, now he’s working with Trelane to gain money and connections to get his revenge.

Previously Cray’s target was Oliver Queen, who was hunting people in a most dangerous game kind of scenario. Next up on the chopping block is Barry Allen! An unhinged, drug-fueled superhumanly fast serial killer who has been killing people in the tech field in order to prevent what he perceives to be world-ending technology (artificial intelligence) from being developed.

We open on Cray and Allen having a chat in a coffee shop with a couple cups of coffee, Barry decries the era of technology, you can’t meet anyone, carry a conversation or order a pizza without looking at a screen. (he’s got a point, I have a phone, a tablet, a tv and my laptop all running right now at the same time, ADHD) After a seriously baffling thought from Barry (it’s because you’re black, isn’t it? WHAAA?!) Cray reveals he knows about Allen’s murderous extracurricular activities and offers Allen a job. 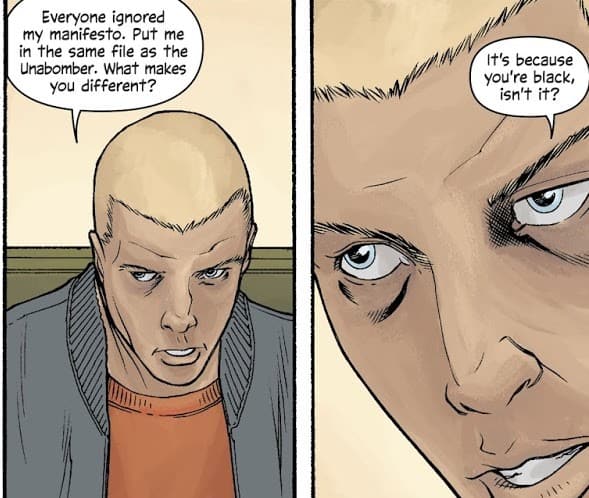 This is seriously more cringe-worthy than what Dr. Light did to Sue Dibny

Cray calls Trelane and tells her although Allen didn’t snap at the bait outright, he seems interested and might just need time. Trelane tells Cray they want the tech Barry has (he’s figured out a way to run inhumanly fast) and they’re willing to kill him or hire him for it.

After Cray hangs up he heads home and sets up a holographic projector to talk to the doctor, she tells him it seems like the alien or whatever it is growing inside him is tied into his emotions, or maybe has emotions of its own? Maybe it wants to keep him safe?

We cut away to Barry’s lab, a very awkwardly shown lab test is taking place, Barry needs to go faster, he feels, but first, he has to kill Michael Cray! 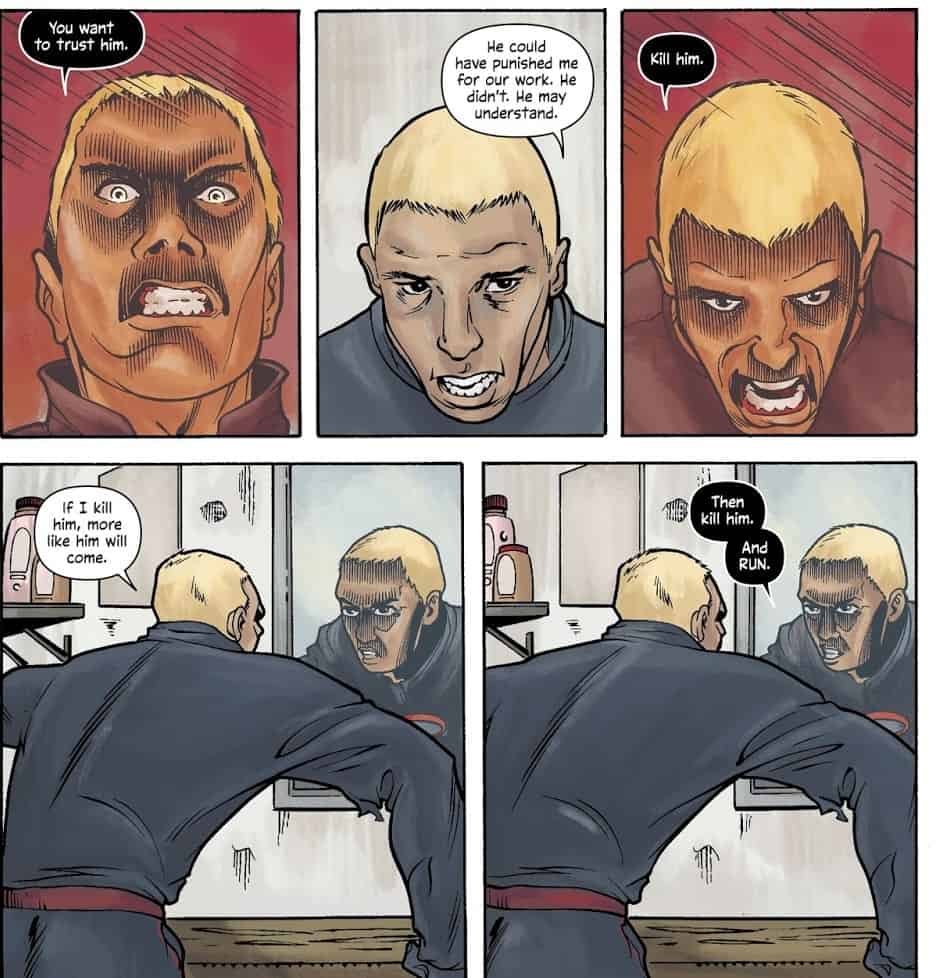 Does Cray get his man? Find out for yourself, pick up a copy of Michael Cray #4 today!

The story of this issue is fine, albeit kind of crappily executed at times, and poorly displayed at those times. This series has been toeing the line on getting kicked off my pull list for 3 out of 4 issues, I don’t anticipate making it to 12.

The Barry fight was kind of ok, although it is over before it starts, the only time we really see Barry in action it is really badly drawn and not endearing to the plot at all. The main villain literally dies off-panel with almost no reaction from anyone, although granted their plan to take him down was kinda genius.

There is a minor argument between Cray and his team that is very poorly justified and for some reason, a gun is pulled, seemingly only so Cray can show off his disintegration powers in a big reveal to his team. Meh.

The art in this issue is sub-JRjr, I have seen better work from any number of independent companies that probably sell a tenth as many copies of their superior books, but that’s the way it goes. It’s hard to describe, the faces almost universally are misshapen and off, and there is one scene in particular where it looks like Barry’s head is about to pop off like an action figure.

Next issue is Aquaman, who has genetically spliced himself with some sea creatures. Finger crossed it gets better, I don’t know what to look forward to. To any of the creators of this comic, should you read this, I’m sorry, I just don’t feel this book is your best work. I’ll definitely give you further chances later, and have enjoyed everyone whose name I recognize’s work at one point or another. No insult is intended.