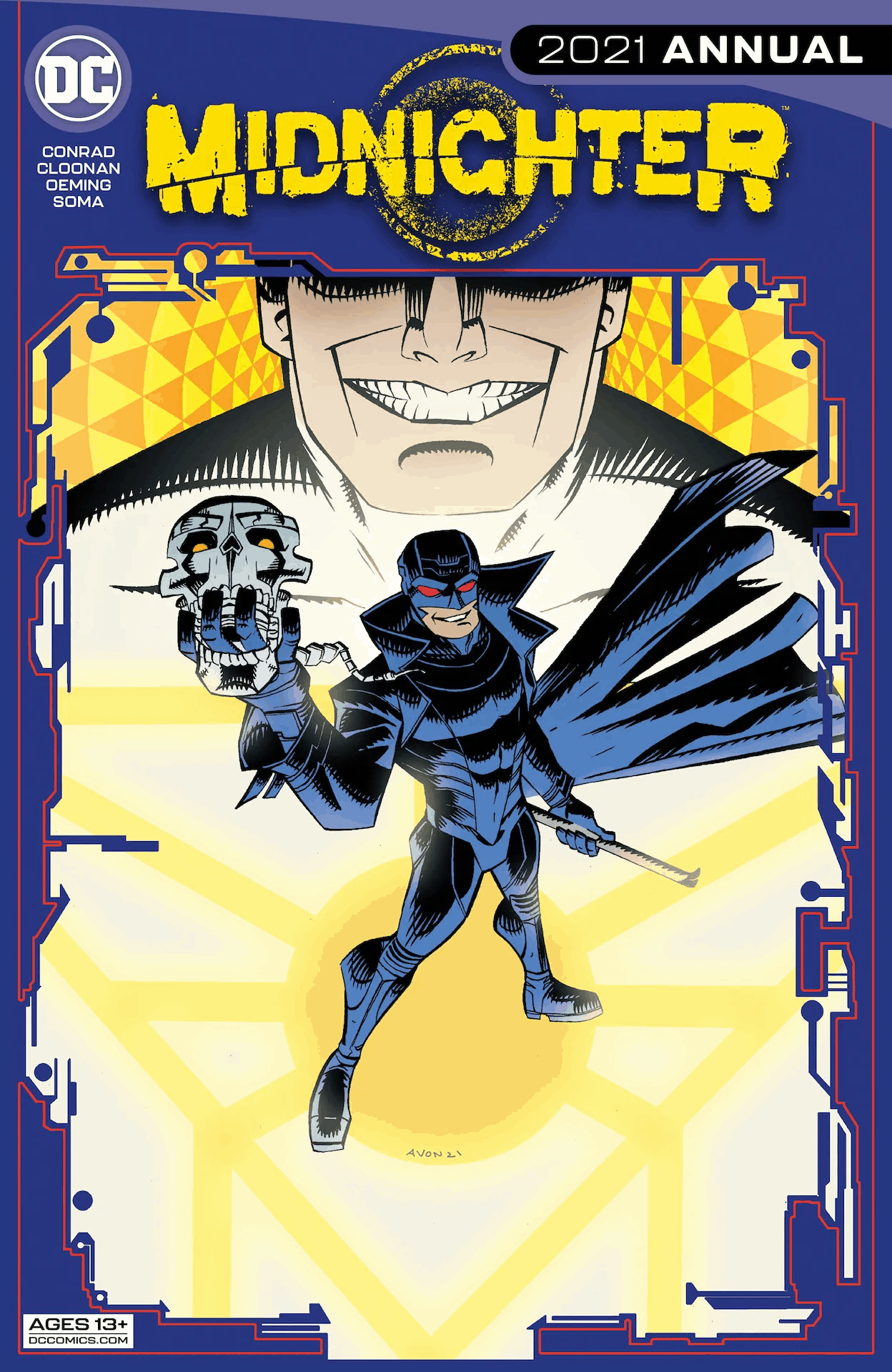 Having navigated time loops and the voice in his head alike, Midnighter has finally arrived at the final act of his battle against cyborg entrepreneur Andrej Trojan. That is if he can break the time loop. If he can’t... well, he’s going to be doing this again, and possibly again, and again, in perpetuity. The good news is, he has allies with Mr. Miracle and Apollo joining him for this most important of confrontations. The bad news is, being there could cost all three of them their lives.

Midnighter has been through a lot to get to this point. For one thing, he’s not even the Midnighter of the current timeline – he’s from the future Warworld, which is itself a lot to go through. He’s also been trapped in a timeloop with the disembodied voice of an electronic version of sociopathic tech millionaire Andrej Trojan in his head, talking… cajoling… manipulating. Finally, he’s been having some difficulty in his relationship with Apollo – or rather, having difficulty avoiding his younger self’s relationship with Apollo, his Kryptonian-class metahuman life partner.

These threads all finally coalesced at the end of Action Comics 1034 when future Midnighter and his new ally Mr. Miracle (new to Mr. Miracle anyway) came face to face with both Trojan’s army of techno-life forms… and Apollo, who arrived like the sun god himself descending from Heaven.

With Apollo’s presence the battlefield looks quite different, and, despite some initial understandable passive aggression, he is the additional weight needed to tip that battle in Midnighter and Miracle’s favor rather quickly… but that’s just the beginning of the story. There are questions to be answered – why is Trojan the way he is, for example, and why didn’t Midnighter just tell Apollo about the timeloop?

Well, as it turns out there are real, solid answers to those questions. When it comes to Midnighter’s secrets, think of it this way: despite our knowing that this Midnighter is from the future and stuck in a time loop, it can be all too easy to forget the implications of that. Namely that he has done this before. In many cases that should be explanation enough – anything, he could do he’s likely tried before. This being Midnighter makes it even more likely that he’s tried any given possible solution, any given possible route. It’s condensed trial and error with notes passed across his various lives like something out of Memento. This leads him here, to this place where he is trying to make his final stand and break the timeloop once and for all.

Of course, if he succeeds, that leads to another question… where does he, a displaced man, go from there?

Pause that thought. For now, let’s talk about Andrej Trojan himself.

Just a few paragraphs ago, I referred to Trojan as a sociopath, but that’s not actually true. Rather than being a true man without empathy, Trojan is essentially a self-created machine – and that reconstruction of himself began from a place anyone could understand. Trojan mentioned in an early chapter that his quest began to form when his mother died and he stared into the maw of the inevitable decay of all things and just said, “No.” Here, we get more details on his experience, his motivations in those early days – his desire to break his own heart open and bleed the feelings out. From there it is perhaps natural that we lead to unnatural territory and, well, body horror as Trojan seeks to abolish death and grief and eventually just rolls that up with all other losses, and all other emotions.

And that really is one of the things that differentiates Trojan from Midnighter. Because as violent, as harsh a personality as Midnighter has, and despite his AI-components, he is at core a very emotional, very human man who holds onto his ties and values them even when everything else around him starts to fail. Trojan wants to live forever, but he runs away from things that could – and will, in time – cause him pain. Midnighter runs toward them, because really… what’s the point of living without them?

I am in no way shape or form going to spoil the ending of this story, but I will say it brings that conflict to its perfect conclusion. And I’ll also say… I really enjoy Andrej Trojan as a villain. He’s a complex guy, and I hope to see him again in the future.

Michael Avon Oeming has long been a favorite artist of mine – since back in the early POWERS days, which is when I first encountered him. It’s funny because I honestly never would have thought to put him on a Midnighter series – probably because I associate him more with noir and fantastical/historical settings – but as it turns out, that’s my limitation. His work on Midnighter has been powerful, emotional, and unapologetically bombastic in just the right ways and at just the right times. It takes a master to convey so much with such a minimalistic style, but there it all is – Trojan’s madness, Apollo and Midnighter’s love, and the excruciating pain of goodbyes.

I love this story. Can’t wait to have it in some kind of collected form, cough cough. In the meantime, hats off to Michael W. Conrad, Becky Cloonan, Michael Avon Oeming, Taki Soma, and Dave Sharpe. It’s been a hell of a ride, and I am most pleased to have been your passenger.

A satisfying and somewhat gut-wrenching finale to the past several months. Questions are answered, future roads are opened, and in the end my biggest question is... so, when do we get more Midnighter?