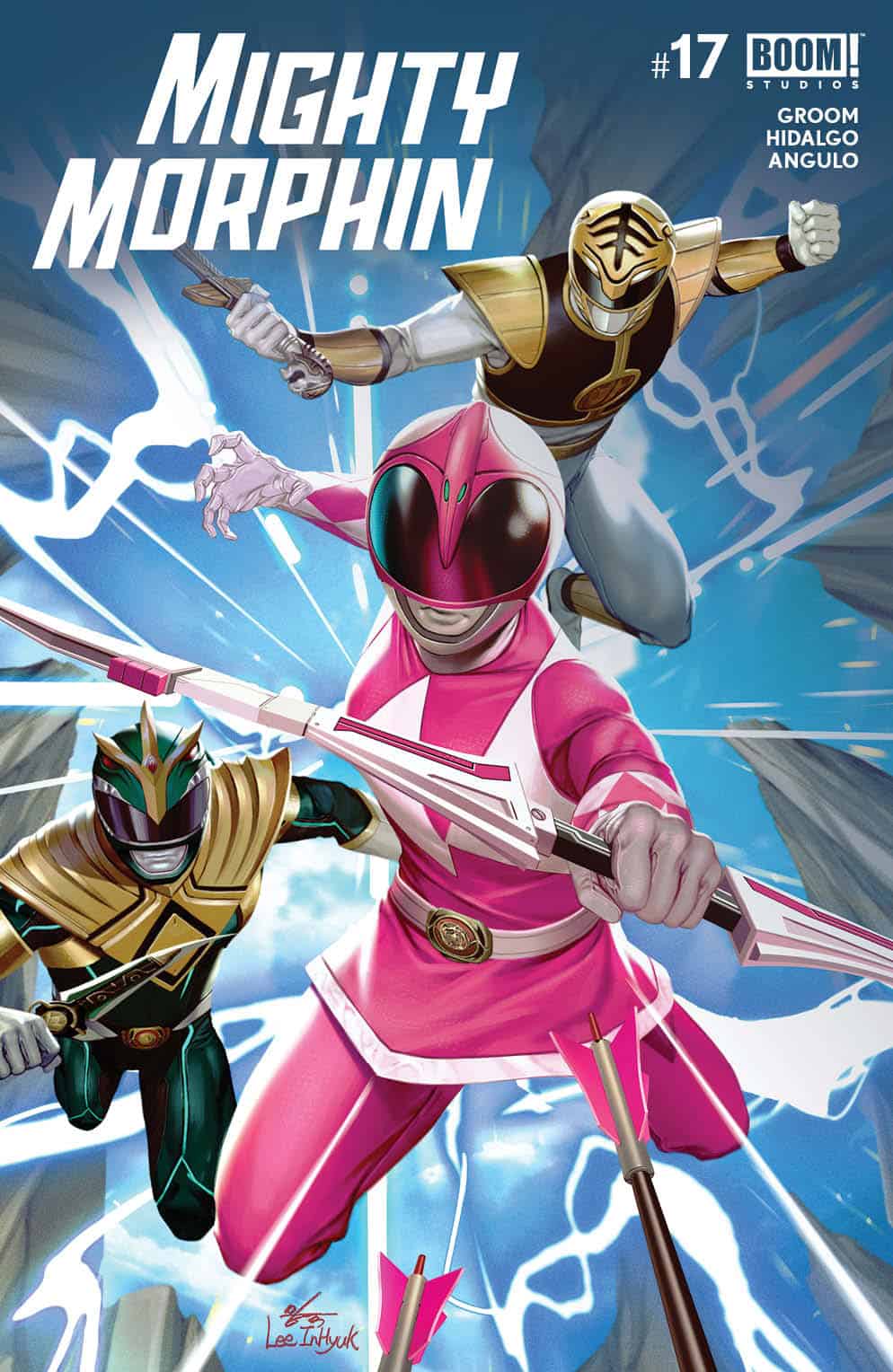 With the defeat of the Eltarian invasion, the Mighty Morphin team must band together with Matt and Grace to help rebuild their Command Center. But will old tensions arise to create new challenges for the teams? Or can they learn to finally put aside their differences?

Last issue we said goodbye to longtime writer Ryan Parrott and artist Marco Renna, but I was excited to see what a new writing/art team would do. And our first glimpse in Mat Groom’s and Moisés Hidalgo’s Mighty Morphin #17 is quite promising! I’m also very glad to see colorist Raúl Angulo and letterer Ed Dukeshire still on the book.

Picking up right after The Eltarian War, we see the Power Rangers inspecting the remnants of the Command Center. Soon they discover that the Command Center is a common model in Eltar, so they make plans to set out to the planet that just waged war on them. Out of the three major “plots” from this issue, this one is definitely my least favorite. It feels like a convenient plot to bring back the iconic Command Center, and I was looking forward to getting a break from the Eltar stuff for a while.

Not all the Rangers get to go on the adventure, however, as Rocky struggles with his home life. His mother works hard to provide for her six(?!) kids, but needs Rocky’s help. I love the spotlight given to Rocky, easily one of the least developed characters from the original series. The show never really gave Rocky the respect which is surprising given his role as the Mighty Morphin Red Ranger. Rocky being the focus of this first arc is delightful, and Mat Groom captures the “unconfident jokester” voice perfectly for the character. 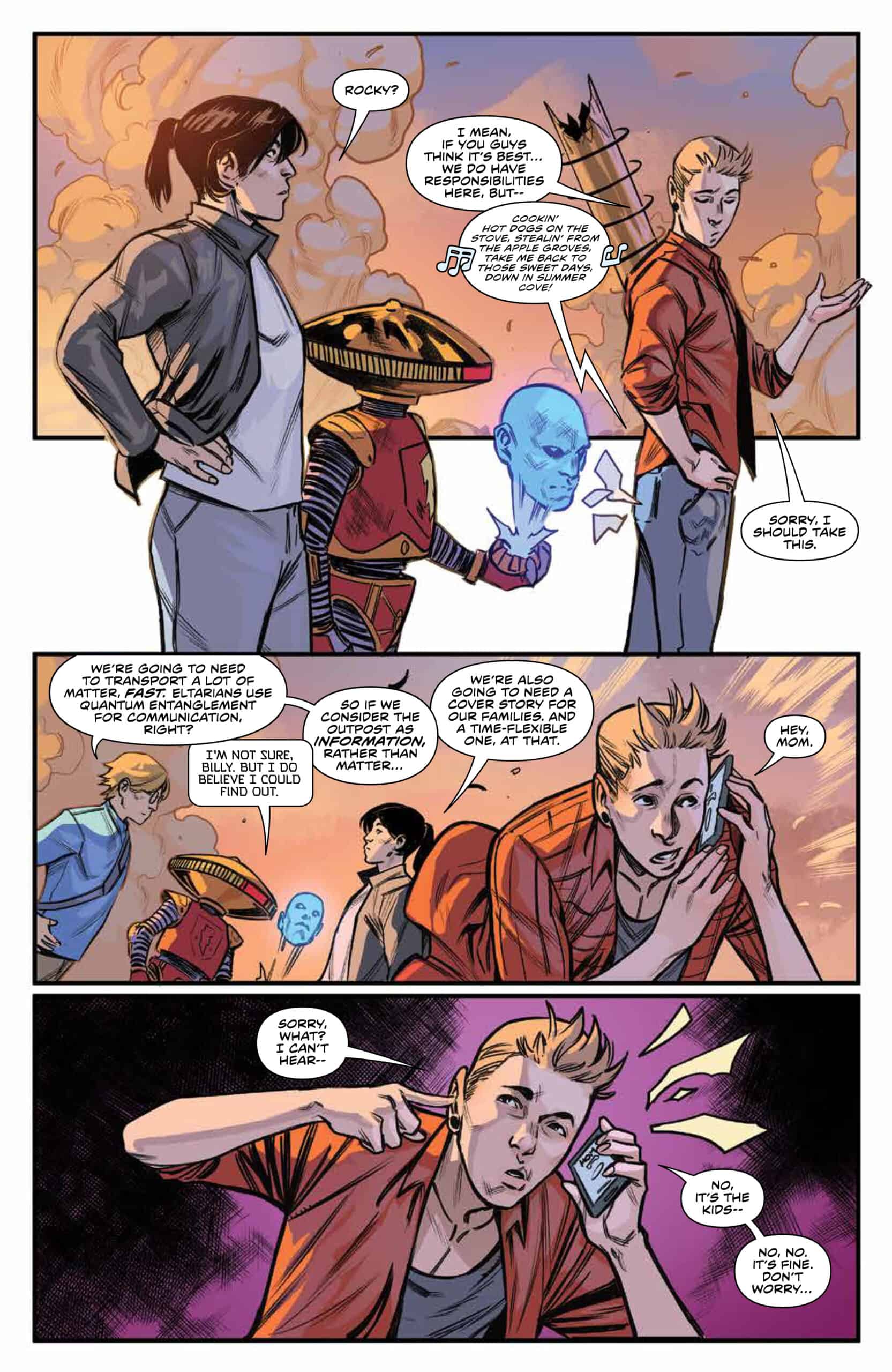 The last of the three plots is my favorite as it introduces a classic yet never-before-seen villain from the Zordon Era of the TV series: King Aradon. If you’re not aware of the character, he was the father of Princess Archerina from Power Rangers Zeo and the archenemy of King Mondo, Zeo’s primary antagonist. While Archerina was a prominent recurring villain (and one of my favorites with her Sailor Moon-esque character design, Disney Princess voice, and the confidence to go up against Tommy Oliver on her own), but her father was only ever mentioned in the show. What this means for the future of the comic is unsure, but I have a feeling we’ll be getting King Mondo and Queen Machina with the rest of the Machine Kingdom before long. The rivalry between the two factions has never been explored, so Mat Groom picked a great hook for longtime Power Rangers fans in his opening issue.

As for the art by Moisés Hidalgo, I liked it for the most part. It’s very stylized and feels a bit more like the Power Rangers Universe artwork than the main Mighty Morphin art. It really grew on me the second read of the issue, so I’m optimistic for the future. There was one shot of Adam very early on that baffled me, however. He appeared very effeminate and I couldn’t tell who it was until I realized the only one missing was Adam.

Mighty Morphin #17 is a great start for Mat Groom and Moisés Hidalgo, with focusing on an underdeveloped character like Rocky DeSantos and bringing in a villain who was mentioned in the TV series but never actually appeared. The future looks bright for our favorite teenagers with attitude!