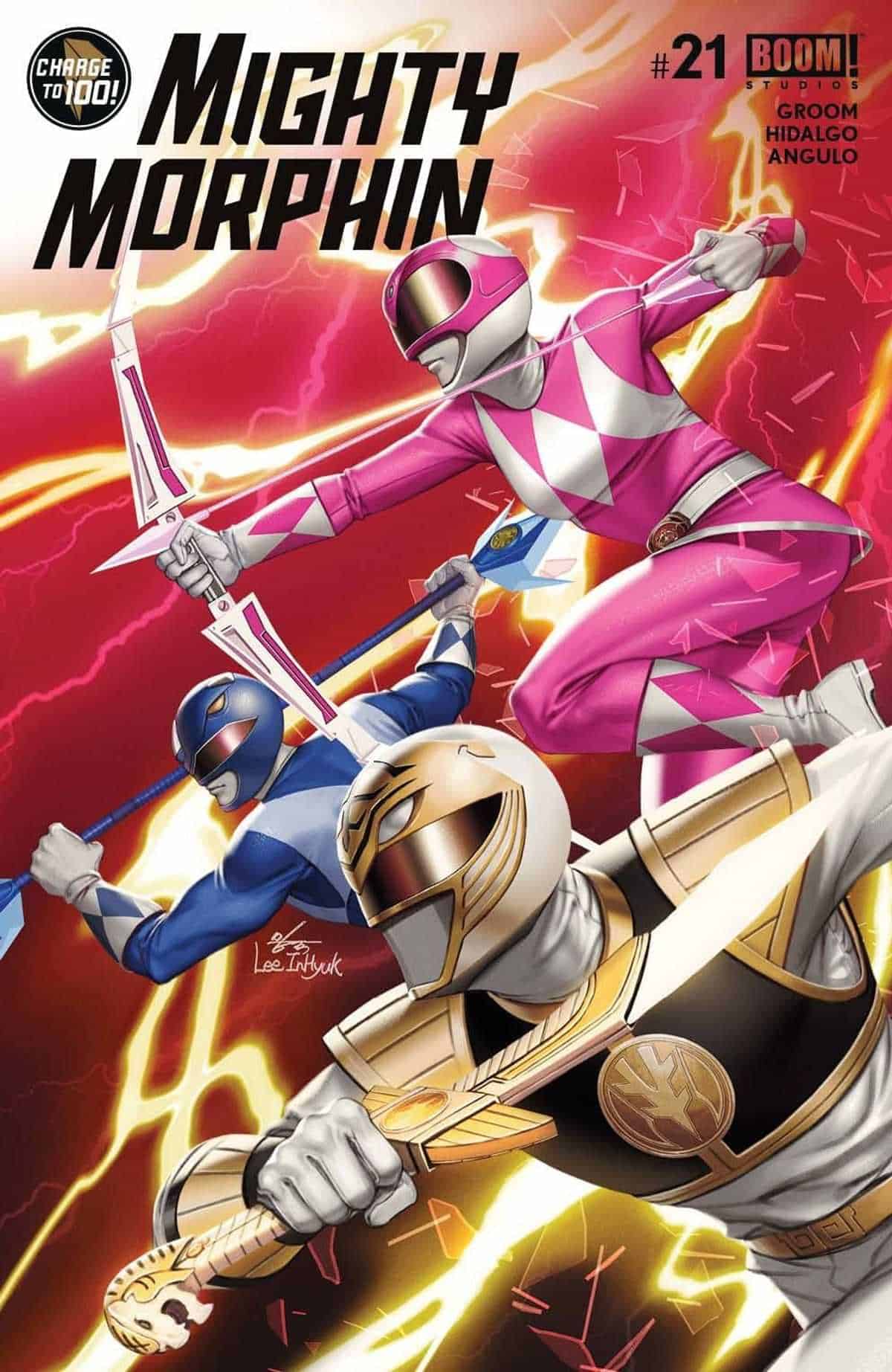 After a recent tragedy that shook the Rangers leader to his core, the Mighty Morphin team faces an identity crisis. After all, there are some challenges even they can't overcome.

Kimberly is my favorite Power Ranger and has been since I saw the first promotional episode of Mighty Morphin Power Rangers as a kid. It should come as no surprise that this Kimberly-centric issue is right up my alley. We’ve seen a lot of the Rangers get their share of the spotlight over the past year, but Kimberly has taken a sort of backseat to allow the other Rangers to develop. Here, we see Kim’s reaction to Jason’s mother’s death as well as learning about the “Shattered Grid” events from Trini. It’s a lot to take in, but Mat Groom does a great job capturing Kimberly’s confident yet concerned voice.

The issue opens with Kimberly bringing food to Jason. If you’ve ever lost a close loved one, you know that food is often a way to show love and care for someone. It’s heartbreaking seeing Jason like this. I originally found Moisés Hidalgo’s depiction of Jason to be unrecognizable. Then I realized… that’s the point. He’s a changed man, and his shaggy hair and sunken eyes represent the profound sadness he feels. Jason and Kim’s dialogue felt very real throughout the entire scene, and I liked seeing the two of them interacting since they’re both part of separate teams now. 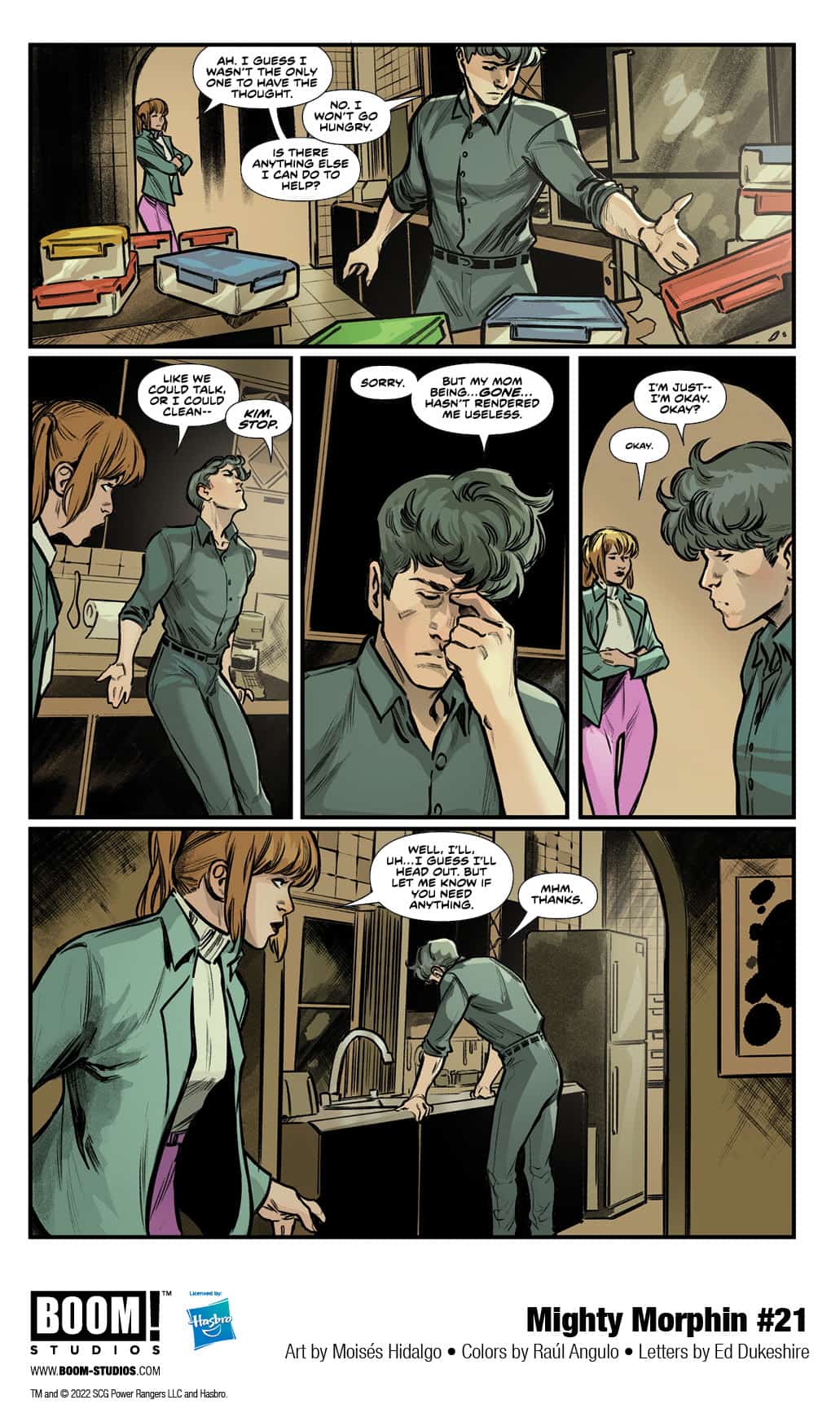 But even better was seeing Kim and Trini hang out. These two were best friends in the original series, and when Trini left, she was instantly replaced by Aisha as Kim’s bestie. It irked me then and irks me now, but I’m glad to see Groom rekindling their friendship. Trini’s evolution into straying from cultural conventions is delightful considering everything she’s seen over the years. I do think it’s maybe slightly strange that Trini would reveal the Drakkon stuff to Kim, but I can see how it was needed to push Kim’s motivations.

Kim and Tommy end up going into the Pocket Dimension where they use the Metallic Armor seen in the show. I need to go back and revisit those episodes because I vaguely remember them, but I thought Kim had been replaced by Katherine at that point. The plot does seem to be barreling towards the climax of Season 3, but I’m doubtful that we’ll see Kat introduced now. Instead of Kat, we get a host of other baddies including a very recent villain from the TV series. Time will tell if these are the true versions of the villains or if they’re constructs created by Billy, but I hope they’re the real deal. I’m a huge Trakeena fan after watching all of Power Rangers Lost Galaxy, so the more we get with her the happier I am.

I wasn’t thrilled with the cover art for this issue. While it is undoubtedly beautiful to look at, I wish the main cover had focused on Kimberly since this is her story. The variant cover by Taurin Clarke would’ve made a much better main cover for this one.

While Kimberly has been in the background for the past few issues, Pink Ranger fans can rest easy as she's the primary focus of this issue.