Mighty Morphin #22: I Can’t Do That Alone 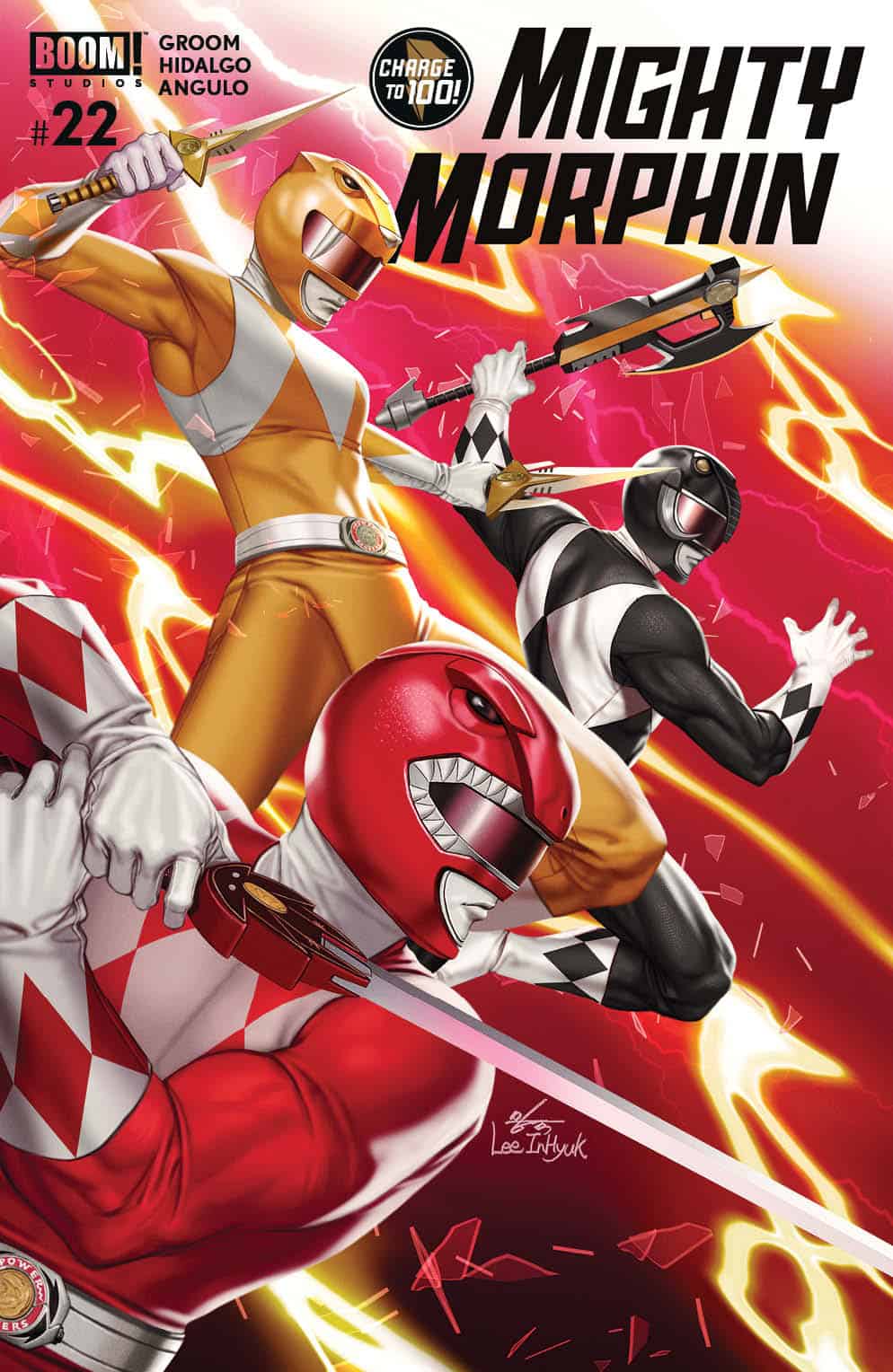 A RANGER RETURNS! With their help, the team can finally stand a chance in battle, but not without consequences. Will the Rangers forge a new path together despite their differences? Meanwhile, Kim receives some much-needed perspective from a fellow Ranger, offering her a glimpse of hope for the future. As the dust begins to settle, will this Mighty Morphin team settle on a sense of identity, and discover their true role in the universe?

Immediately beginning where the last issue left off, Kimberly and Tommy come face-to-face with five incredibly popular Power Rangers villains. Mat Groom must have known that his Mighty Morphin run wouldn’t be lengthy as he threw in tons of easter eggs that longtime fans of the franchise will gobble up. And you know what? It worked. I gobbled up all of these eggs and I’m craving more. I’d love to see Groom return to the Power Rangers comics in the future even if BOOM! Studios recently revealed the new creative team (which is also very exciting!).

Groom and Moisés Hidalgo do a fantastic job depicting these five villains. I’m familiar with all of the villains in varying degrees, and I suspect many readers will be also. So let’s take a roll call, shall we? The first chronological villain among the group is Trakeena, a fabulous villain from Power Rangers Lost Galaxy. I watched the entire season a few months ago and I have to say, Trakeena is easily one of my top favorite Power Rangers villains of all time, right up there with Rita Repulsa. She’s a very campy villain who would make the queens of Rupaul’s Drag Race blush, but in the best way possible. Next up is Ransik from the incredibly popular Power Rangers Time Force. I’m nearing the end of this season myself, and Ransik is a great, sinister villain while also bringing a sympathetic edge to the character.

Third is Dai Shi, a character from Power Rangers Jungle Fury. I have yet to see the season so I’m not super familiar with the villain, but I know him from the video game Power Rangers: Battle for the Grid and he has a fun design. Sledge is next, a bounty hunter from several different seasons of the show. And the most recent villain, surprisingly, is Void Queen, a character from the current series Power Rangers Dino Fury. Her design is beautiful and intricate, and inspired me to watch her season. I love that Groom included her as we’ve barely seen what she is capable of in the show. 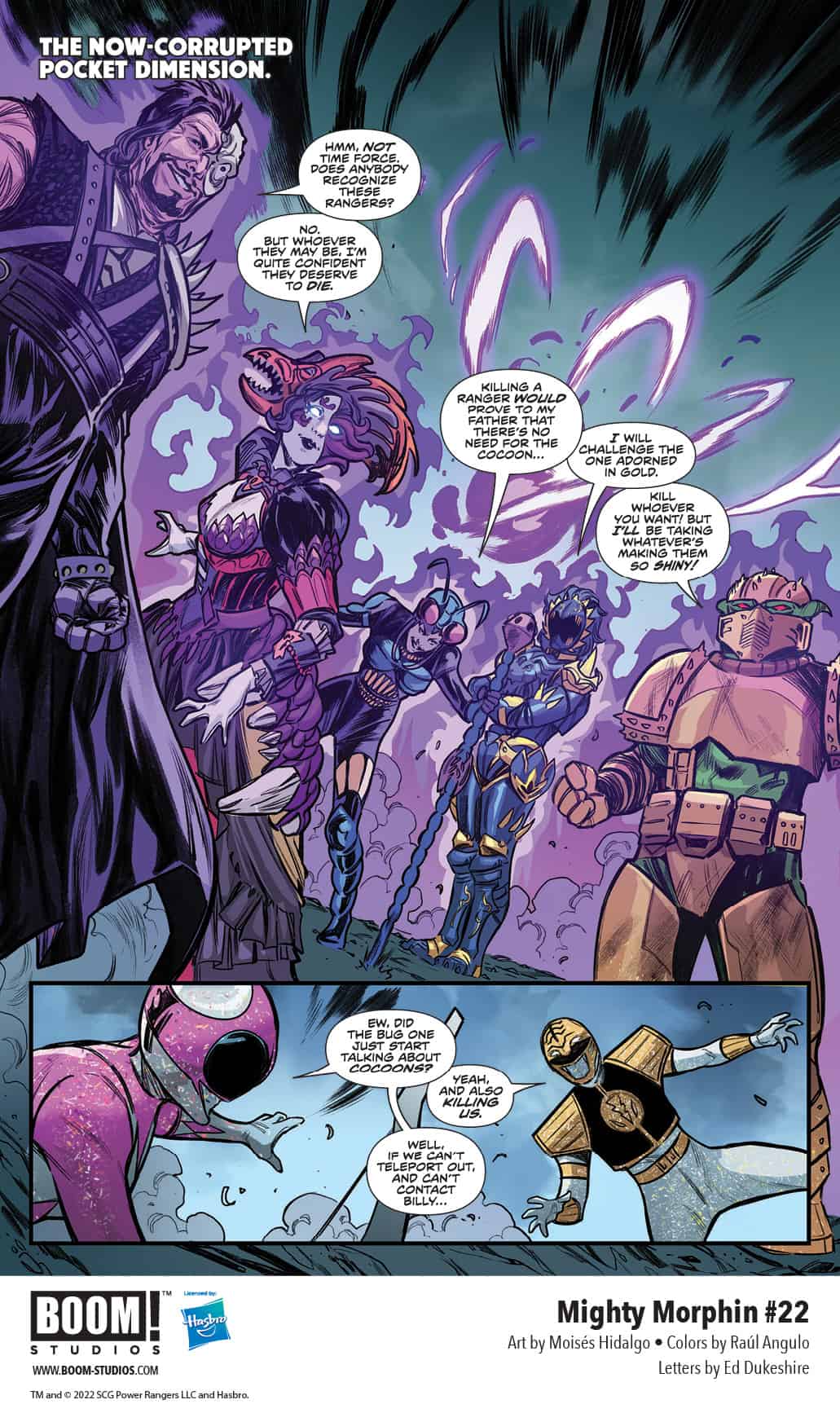 This issue is very action-focused, with the villains getting the upper hand against the Pink and White Rangers. And as cool as it is to see all these villains from different time periods, it’s Kimberly and the Pink Rangers who steal the spotlight. The TV show famously had an episode titled “Forever Red” which saw all of the Red Rangers up to that point reunite for a big battle. Groom is clearly inspired by this as the story brings in several Pink Rangers from across the span of the series, effectively making this a “Forever Pink”. While I would’ve loved to see this as a six-issue storyline instead of a two-issue wrap-up, I will take what I can get.

As a kid, I was a Pink Ranger stan, so seeing each of these amazing characters show their strengths against five deadly villains was a blast. The action is depicted wonderfully by Hidalgo in some of his best work yet. My only real criticism of the issue is that the cover doesn’t even begin to scrape the surface of what’s inside the issue. Why the main cover has three Rangers unrelated to the story as the focus, I’ll never know.

Mat Groom's work on Mighty Morphin is short but sweet, and I'd love to see him and Moisés Hidalgo return to the franchise in the future.

Mighty Morphin #22: I Can’t Do That Alone