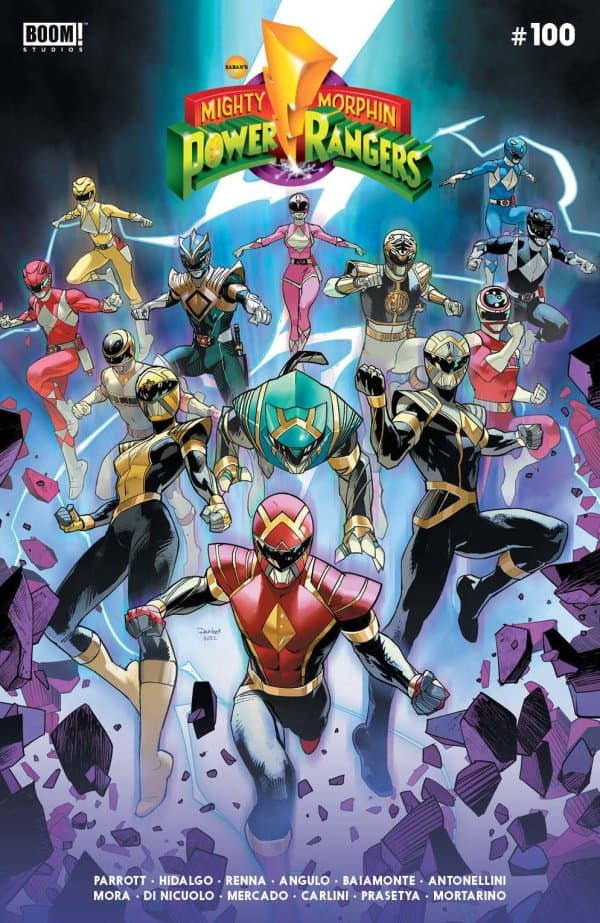 News of a deadly threat reaches the team-one that threatens every Ranger and Earth, and even a home long since destroyed.

As the climactic battle against unspeakable enemies unfolds, the lines between friend and foe blur, and difficult decisions await even the strongest of Rangers.

The epic culmination of a story years in the making!

In the spirit of fan favorite issues like the landmark X-Force #1, each copy of Mighty Morphin Power Rangers #100 also contains 1 of 10 collectible trading cards, with art by Kris Anka, and designs by Dylan Todd, featuring your favorite Rangers and villains and an exclusive art print!

The day is finally here for Mighty Morphin Power Rangers #100, and it definitely lives up to the hype. The Power Rangers must face off against the Death Ranger, who has taken over the Omega Rangers. It’s a very simple concept that could easily be generic Power Rangers fluff in the wrong hands, but Ryan Parrott brings his top tier writing to such an explosive finale of this critically-acclaimed run.

Par for the course, pretty much everyone gets a chance to shine in this story. There are exciting action sequences throughout the issue, but it’s the heart and soul of the plot that punched me in the gut. From Jason’s relationship with his recently-deceased mother to Journey’s… well, journey, there’s no shortage of moments that will leave the reader teary-eyed. Parrott has crafted some very impactful moments for Power Rangers lore, and I can only hope subsequent creators manage to bring the blend of action and emotion to future runs.

I can’t help but give this issue 10/10, as it brings everything we’ve loved from Parrott’s Power Rangers to the table. I would have liked to have seen some of the classic villains make a brief appearance, but I admit that might have pulled the attention away from the battle on KO-35. As it is, Parrott and company created the perfect sendoff for their Mighty Morphin Power Rangers era.

An amazing sendoff to one of the best runs the Power Rangers franchise has seen, Mighty Morphin Power Rangers #100 is action-packed yet remains full of heart.