The Mighty Valkyries #1: A Wolf At the Door (SPOILER FREE ADVANCED REVIEW) 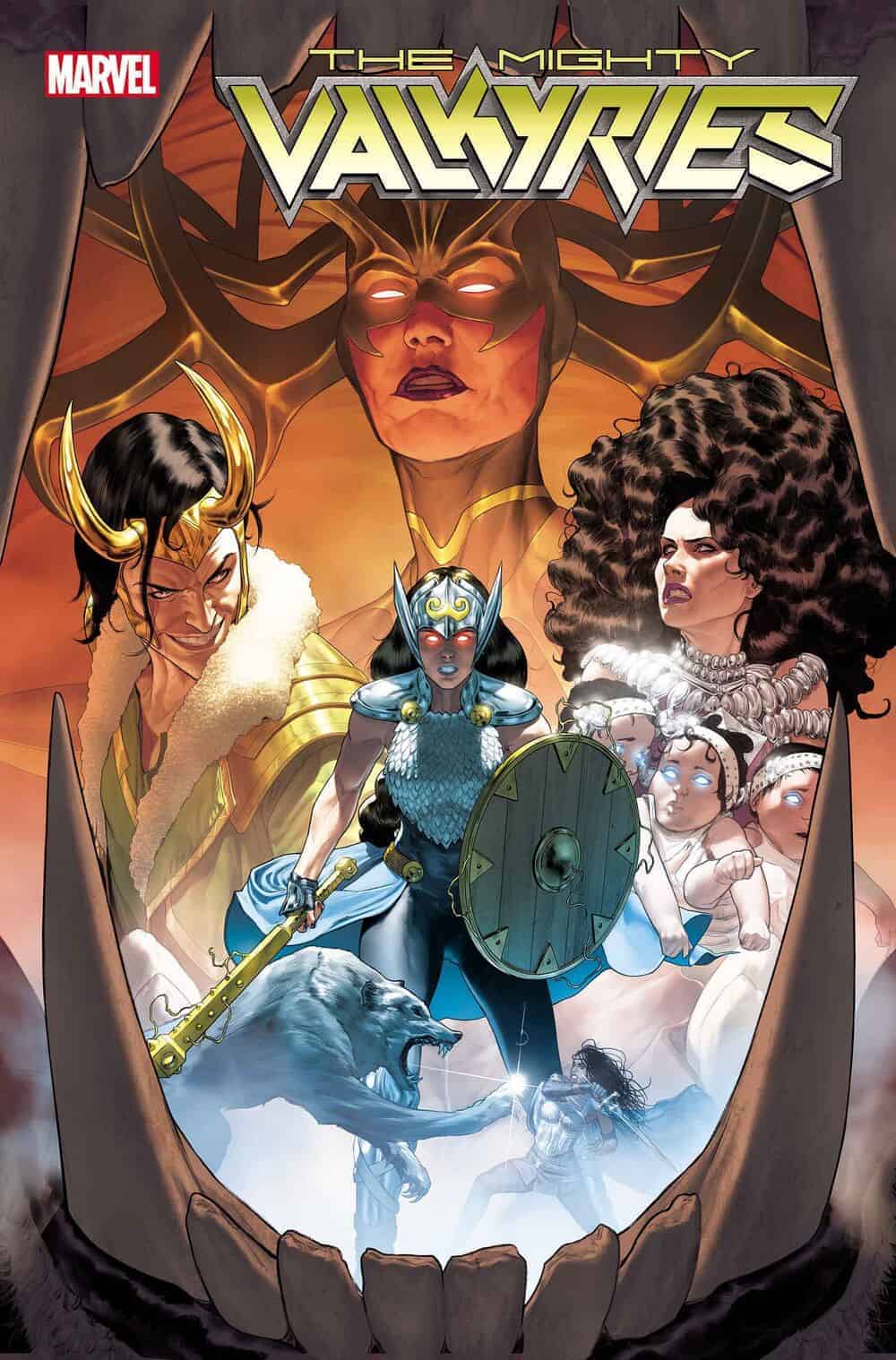 Jane Foster believed she was the only Valkyrie left—but the fight against Knull, the King in Black, proved her wrong. Now the Valkyries must redefine their roles in a changing world—and Asgard’s not going to make it easy. When Loki comes to Jane with rumors of a beast stalking the souls of Midgard, she leaps into action—but she’s not the only one after the strange wolf’s hide. She’ll need backup...but her ancient coworker has other priorities. Years ago, the warrior made a promise to a woman she loved. And now, it’s time to follow through.

Mighty Valkyries #1 is split between two stories, the first following Jane Foster and the latter following the ancient and unnamed valkyrie Jane rescued from a corrupted Celestial. The first story, by Jason Aaron and Torunn Grønbekk, involves three stolen babies, Hela, Loki, and Loki’s giant wolf offspring. The story is fast-paced, but pauses for slower moments that allow it to feel slightly more human and grounded. Over all, it’s well-balanced and offers plenty of tantalizing mysteries and high-stakes drama to lure readers back for next month’s issue. This story seems to be the one originally intended for the third arc of Valkyrie: Jane Foster before that title was canceled, so it will be interesting to see how the plot takes the recent happenings of the primary Thor title into consideration (or doesn’t). 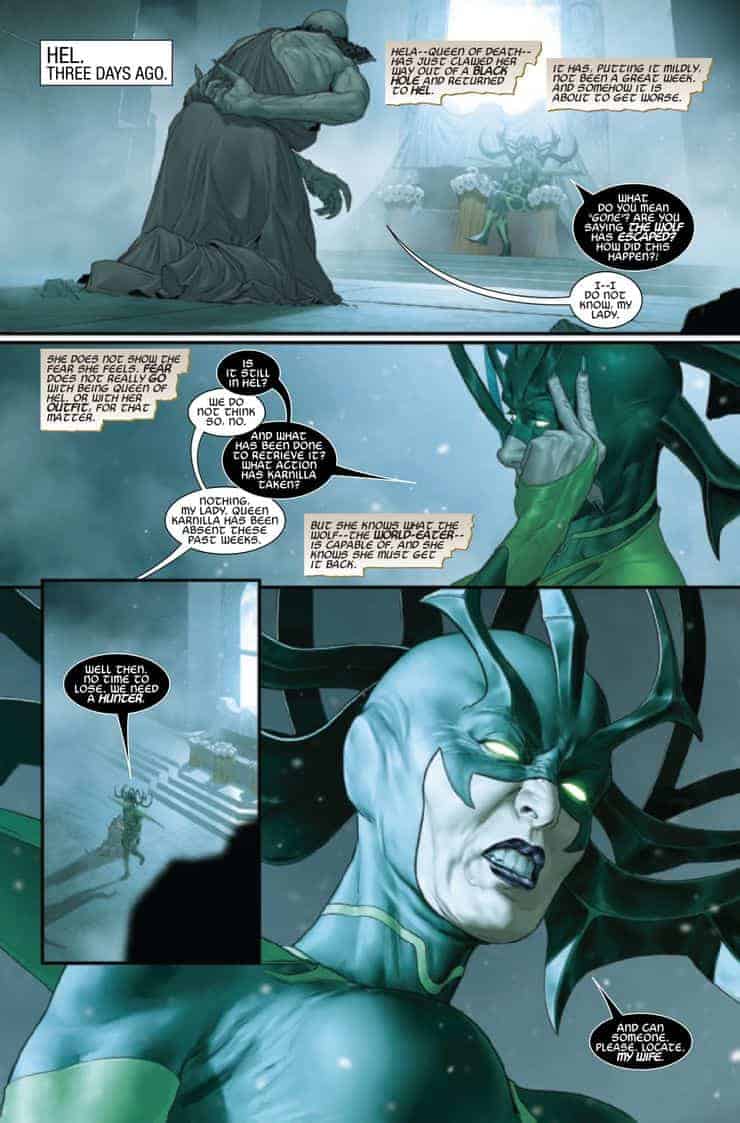 For the primary story, Aaron and Grønbekk are joined by artist Mattia De Iulis, whose hyperrealistic style can feel like foreign territory for comics. However, his work — with its cinematic compositions and lighting — meshes perfectly with the high-fantasy melodrama of the tale at hand. One wonderful quirk of De Iulis’ work is his focus on imperfections, like Jane Foster’s jutting pointed chin, an old woman’s frizzy hair, and the way Hela’s skin-tight costume bunches behind the ears when she turns to sneer. While some artists in comics give all of their characters the same face, or create characters who never resemble themselves, De Iulis creates characters who feel consistent unto themselves but incredibly distinct, and the result is incredibly satisfying. With the addition of his strong sense of shot composition and lighting, there’s an overpowering feeling of reading a film, with De Iulis playing both cinematographer and casting director. 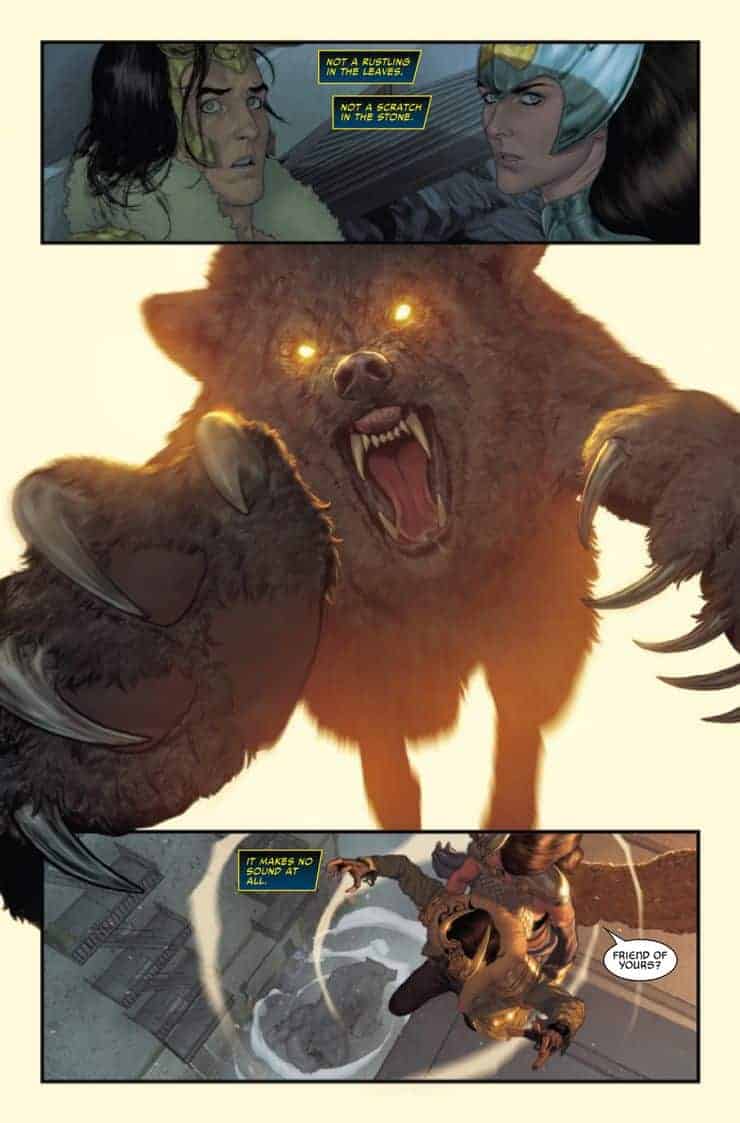 The second story is solely by Grønbekk, who is forced to be economical with only ten pages at her disposal rather than the primary story’s twenty. While smaller in scope, it’s still a story about death, as the recent Valkyrie-centric stories have been — this one both about a dying world and a valkyrie fulfilling her dead girlfriend’s wish. While the story is directly following the events of the previous miniseries, it would be nice to have more queer representation that didn’t involve tragic death, even (and especially) in a book where death is always a central theme. In contrast to De Iulis’ art on the primary story, the art of the second story feels more traditional to the medium, with its heavy black linework and separate colorist. Erica d’Urso’s art is evocative but people and scenery feel uniformly under-detailed. With the details she chooses to include, she still creates expressive characters whose costumes ooze personality and often emphasize the planet’s economic disparity and consumerist culture. The colorist, Marcio Menyz, plays with a vibrant color palette that does an equally satisfying job of scene-setting. The dusty, smoggy scenery is diametrically at odds with the artificial pinks and greens and turquoise of the characters inhabiting it, which ultimately informs the reader as to why this planet is on the brink of collapse. 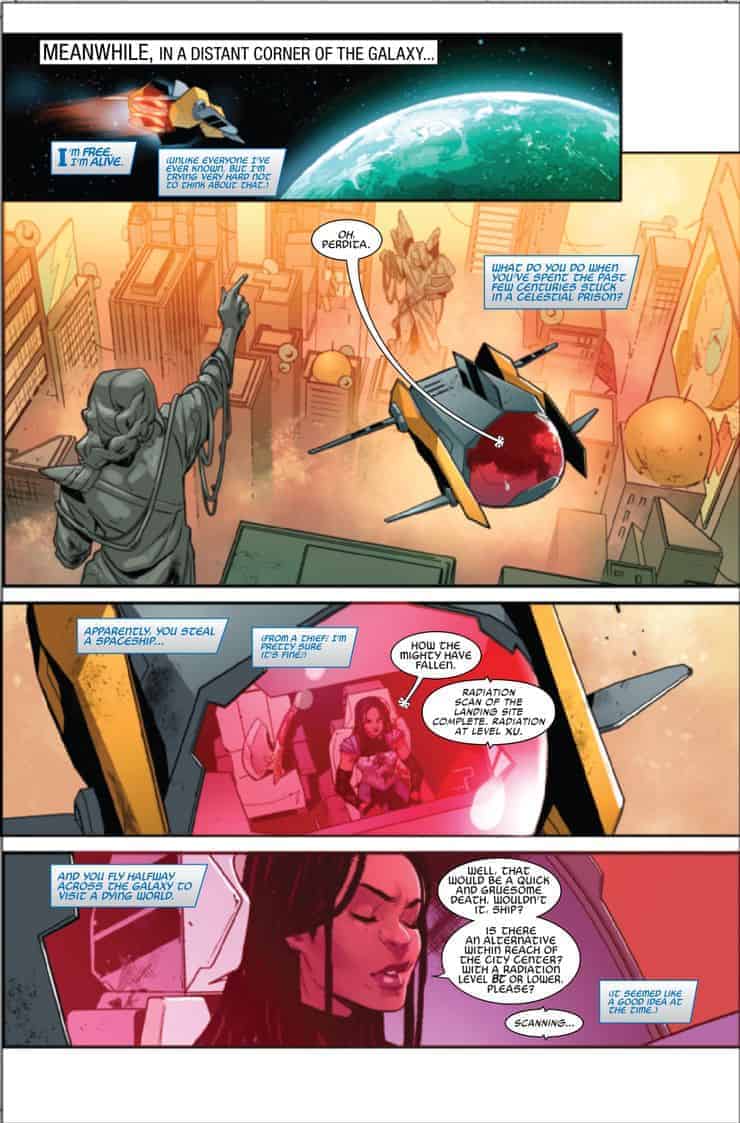 The cover, also from Mattia De Iulis, feels similarly epic in scale and cinematic in scope to the primary story. Struggling to fit all of the book’s primary and secondary characters, the composition is a film poster “floating heads” composition and one of the only moments of action shown on it is nowhere within the book. But even if it’s a played out composition, it nonetheless exudes enough high fantasy drama to quickly draw in potential readers, and managed to make me excited for this book from the day it was announced months ago.

The Mighty Valkyries #1 begins two exciting Asgardian adventures. The primary tale is mouthwateringly cinematic, but both have tantalizing secrets urging readers to return.

The Mighty Valkyries #1: A Wolf At the Door (SPOILER FREE ADVANCED REVIEW)