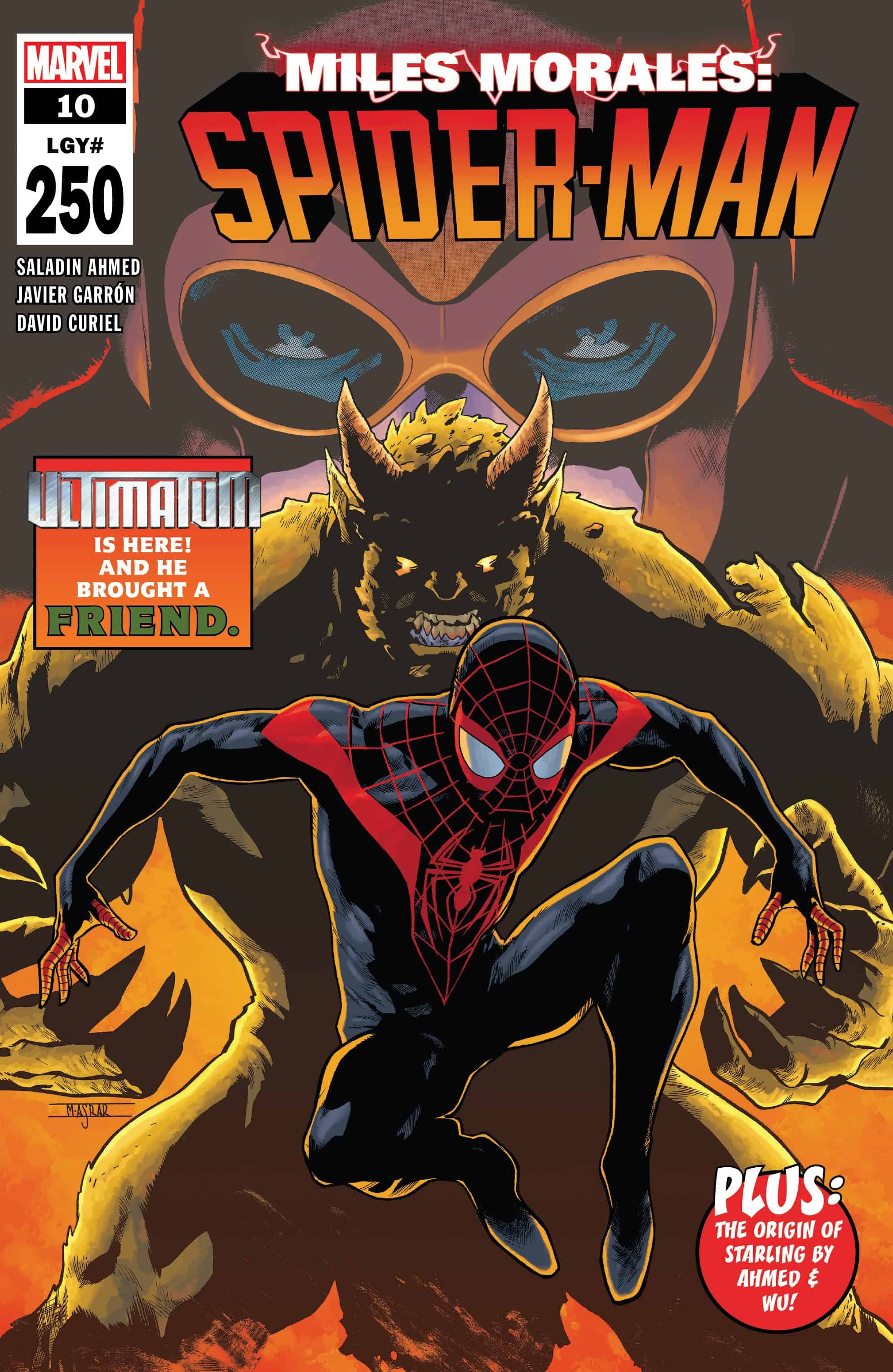 SPIDER-SEMIQUINCENTENNIAL OR BIG 250th ANNIVERSARY ISSUE? That’s right, it’s our 250th issue and it’s Miles Morales’ birthday! But YOU’RE getting all the gifts! A mystery dating back to Miles’ first appearance? Answered! A terrifying villain destined to become one of Miles’ greatest adversaries? Revealed! Special guests, like maybe Peter Parker: Spider-Man? YOU KNOW IT! All busting out of 25 pages by main series storytellers Saladin Ahmed and Javier Garrón, PLUS a bonus back-up by Ahmed and a special guest artist delving into the history of your new favorite character, STARLING! Your FOMO is well-founded! DON’T MISS IT!

Let’s dive right into this BIG 250th Anniversary issue, because boy, is it a doozie! 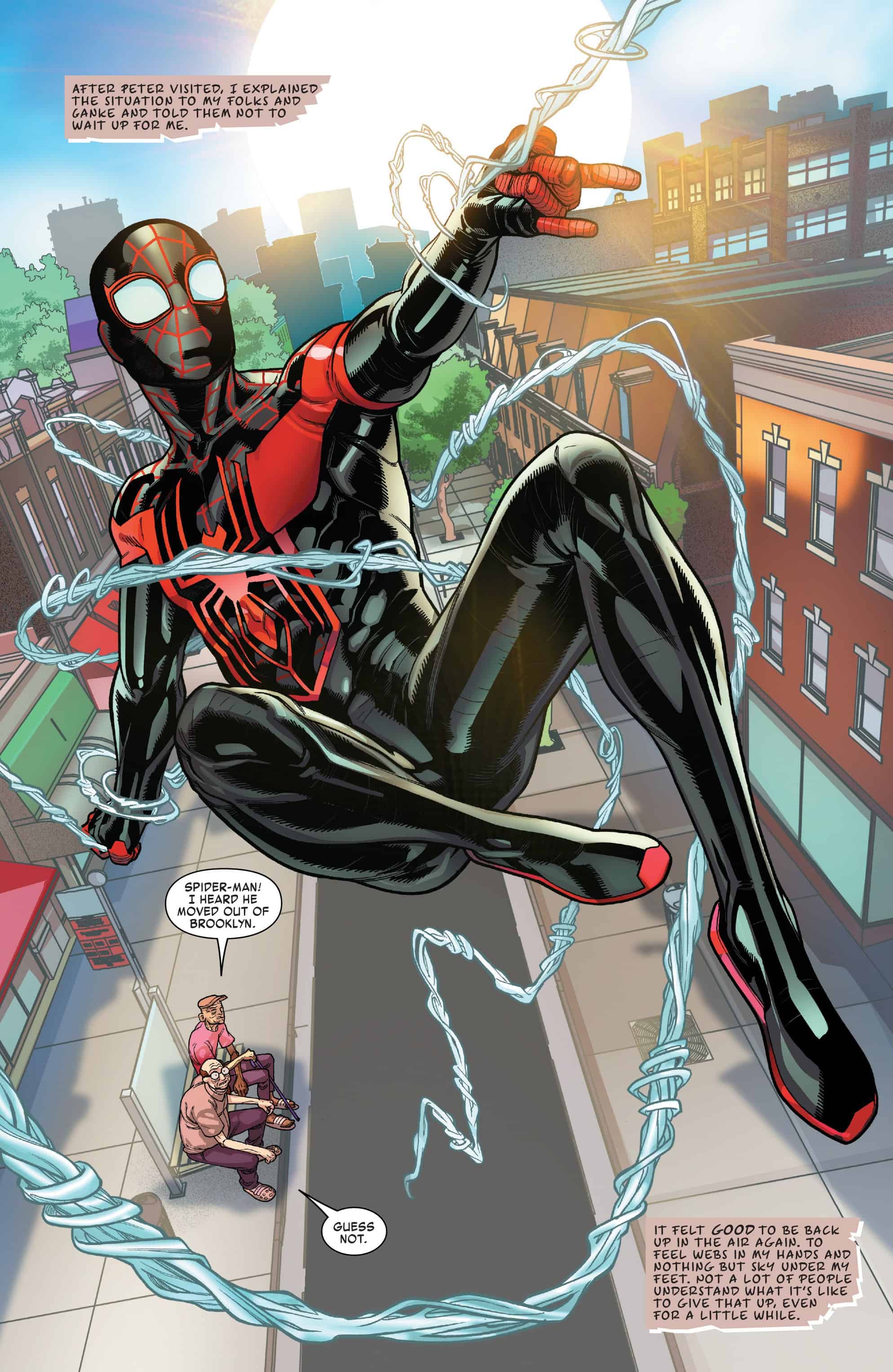 So it’s Miles birthday, and although the family as a whole has recently been through a lot of turmoil, they are still a family and they are determined to make it work. Before the shocking reveals start happening, we begin this story with a heartfelt look into the dynamics of the Morales family, with Miles still not going out as Spider-Man and his Mom pregnant with another child. Gahnke makes a nice, albeit inconsequential appearance, and it feels like things are finally starting to slide into normality after Miles’ abduction by the Assessor.

That’s when Peter Parker shows up and throws a wrench into everything. With people in need, Miles once again dons the Spidey mask to be the hero he’s destined to be. This is where – excuse my language – $#!% hits the fan! Green Goblin from Earth-1610 (the Ultimate U!) makes a violent appearance before Ultimatum shows up, wearing what looks to be different pieces of armor and weapons gathered from the Avengers. He makes a curious remark to Green Goblin after recognizing this Spidey, saying “There’s a wrinkle here, I need to think it through”.

Let’s backtrack a bit, Miles Morales was first introduced in the Ultimate Universe before eventually making his way into Earth-616 thanks to some clever storytelling in the 2015 event Secret Wars that dealt directly with bringing together Earth-616 and 1610. So with Miles as Spidey being brought to the main Marvel Universe post-Secret Wars his doppelganger originally from Earth-616 was left to his own vices. His relationship with Fisk happened early in Miles’ story so to see it coming back around now is certainly exciting. 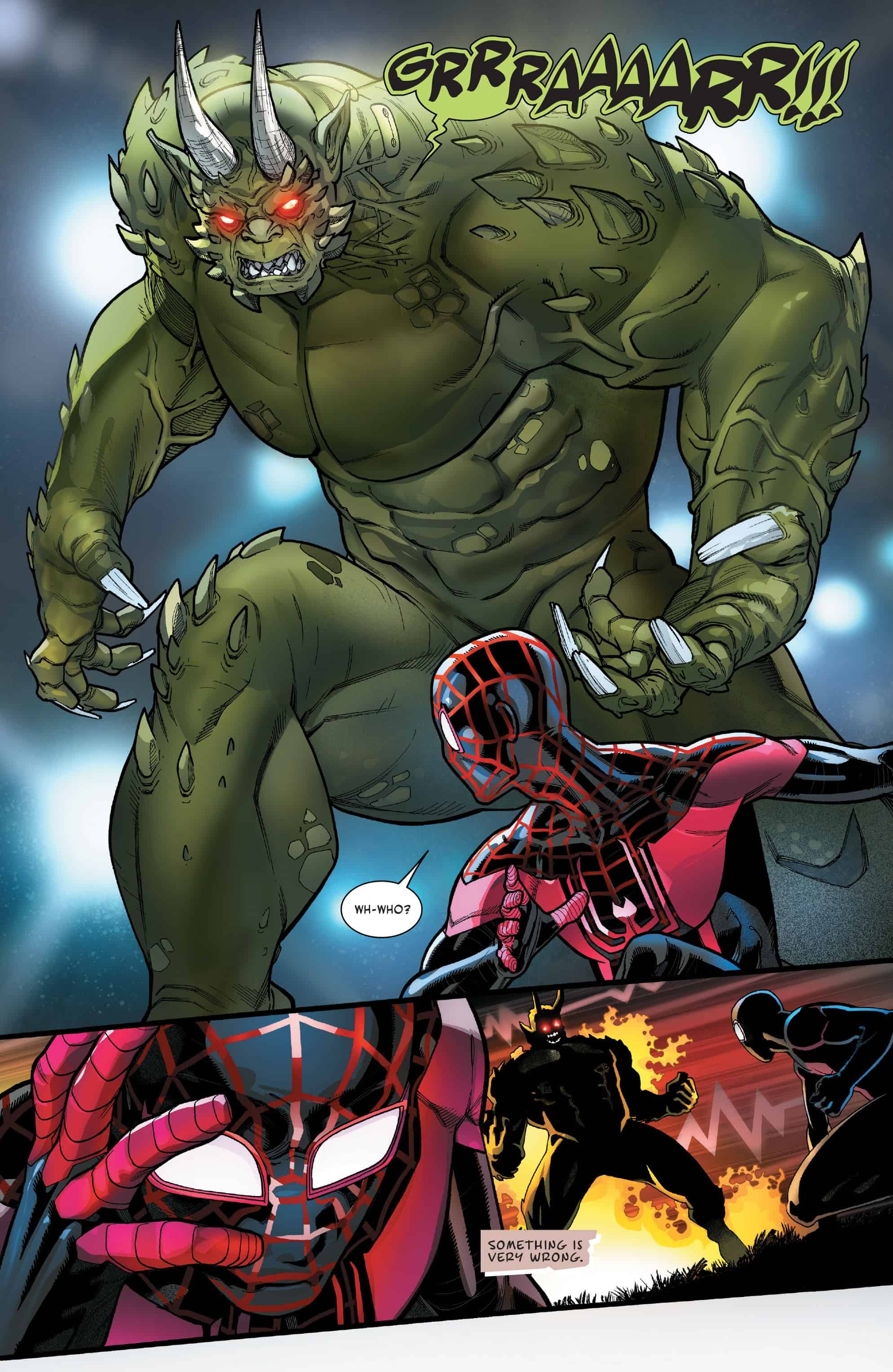 It doesn’t take long to guess that Ultimatum is in fact Miles Morales from Earth-616. This revelation is undoubtedly going to shock our Spidey Miles, but the consequences won’t stop there. With Green Goblin still in play and Fisk involved as well, this story seems poised to explode into something remarkably thrilling.

While this anniversary issue is meant to be a turning point for the series, it feels like it exceeds its own expectations with such lofty ambitions. Exploring the impacts of the merger between Earth-616 and 1610 is something fans want, without question, and with this creative team at the helm, we could be in for quite a treat.

Everything regarding the execution of Miles Morales Spider-Man #10 is top notch. The illustrations, colors and letters all coalesce into a book that feels unified in its vision, making for a really fun reading experience. Is it a perfect book? Definitely not. There are a lot of questions that still remain, but it reinvigorates the already impressive series with a massive step forward.

Plus there is a bonus! As if this issue wasn’t great enough, we also get a short story at the end detailing the origins of the latest hero (maybe?) introduced, Starling! It’s a fun, but still emotional story that may not impact much of what is happening right now, but is still welcome simply because the character is already so likable. Hopefully we see more of Starling in the future!

Miles Morales Spider-Man #10 is a remarkably ambitious issue in an already impressive series, exploring the consequences of Earth-616's merger with the Ultimate U with excellent precision.