Miles Morales: Spider-Man #28: There Can Only Be One? 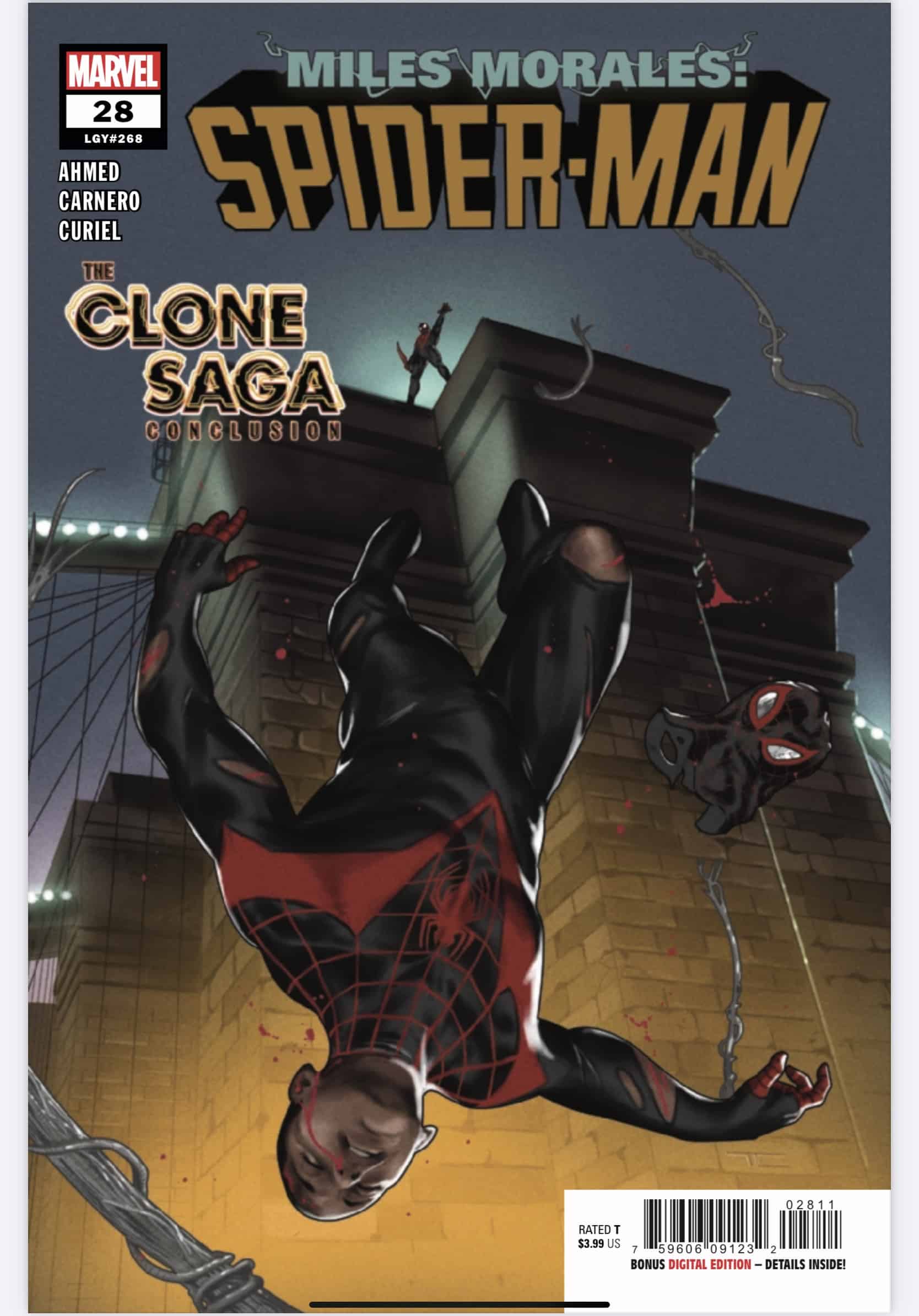 Miles' clone saga comes to a conclusion as Miles faces off with his evil doppelgänger with the fate of his baby sister hanging in the balance.

This is it, the conclusion of the (second… or is it third…?) clone saga.  Miles gains his life and a new brother.  Selim is depicted here as evil but confused.  I really believe that he wants to be Miles Morales in the end.  He has a “slip” of the tongue where refers to “our parents.” He believes that he is the stronger and as a result, he should be the one true Miles Morales.

I do have an issue with using the baby as a plot devise in this story.  It is true that it creates high stakes but I feel that it is unnecessary to depict an innocent infant in danger like what is depicted here.  It is not a good image to have a crying baby wrapped in webbing attached to a guard rail of a bridge while the big boys fight for her. I wish writer Saladin Ahmed had thought of another way to depict the risk to Miles’ family.  I find it unlikely that Baby Billie has any power herself unless she would develop them later as a mutant but it is way too early for that to manifest.

I do like that at least Shift and Mindspinner did somewhat see the error in Selim’s idea.  Shift most notably when he saved Billie and the baby seems to be comfortable in his arms.  Mindspinner turns on Selim when he attacks Shift for his “treachery.” This leads to the deaths of both Spinner and Selim, leaving Shift alone but probably not.  I do believe that Miles’ parents will take the clone in.

The art by Carmen Carnero is very good.  I like the use of the torn costumes as signs of the brutality of the fights in this issue. Most of the panels in this issue depict action and fighting it is very dynamic and the uses of the sound effects are rampant here.  I like the lettering of the sound effects, it depicts the action and energy levels of the different attacks and the panel showing the deaths of ‘spinner and Selim shows the amount of power used to destroy those characters in addition to the anguished look of Miles when it happens.

The stakes are high but I feel they may be a little too high in this story.  Definitely a lot more compact and more story-driven than Peter’s own clone saga.  In the end this was an enjoyable arc that gives great character beats for Miles and makes the reader fall more in love with this character if that were possible.

Miles Morales: Spider-Man #28: There Can Only Be One?