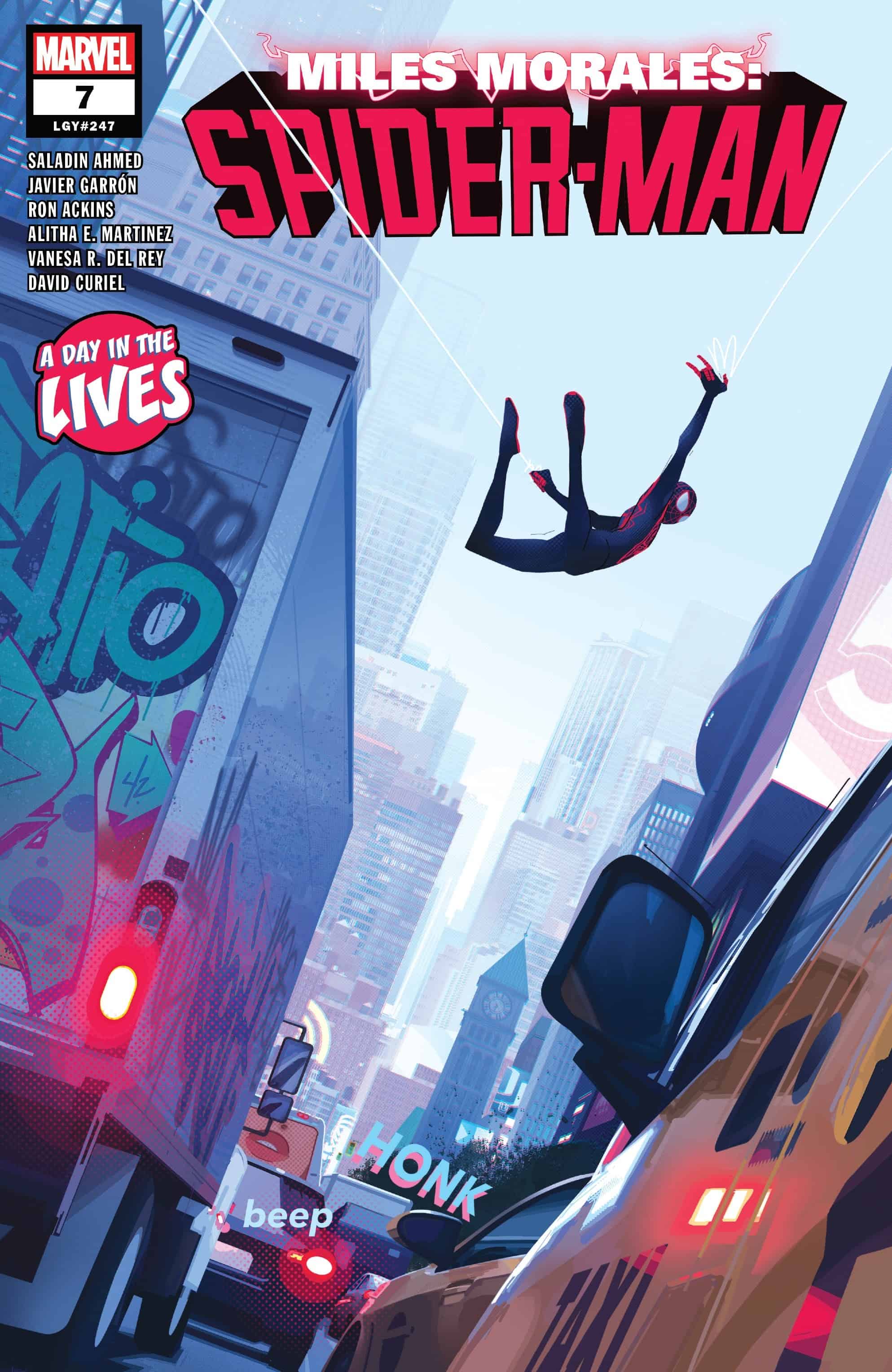 After the dramatic conclusion of the first arc, Miles has to take stock in his life. What do his parents think of all of this? How do his friends, particularly Bombshell, react to what’s happened? All this, a surprise return and a cover by the art director of SPIDER-MAN: INTO THE SPIDER-VERSE, Patrick O’Keefe!

The creative team kicks off this new arc in Miles Morales: Spider-Man with a drama-filled story that will honestly have you asking “what else can go wrong?” by the end of the issue. Miles leads a complicated life with a lot of hardships, and this issue does a great job putting his life into perspective. The plotting and narrative flow gives the impression that this is just another day in the life of Miles Morales, but the events are nothing short of extraordinary. This is just great superhero storytelling from a team that fundamentally understands who this character is, as well as the dynamics of his struggles. 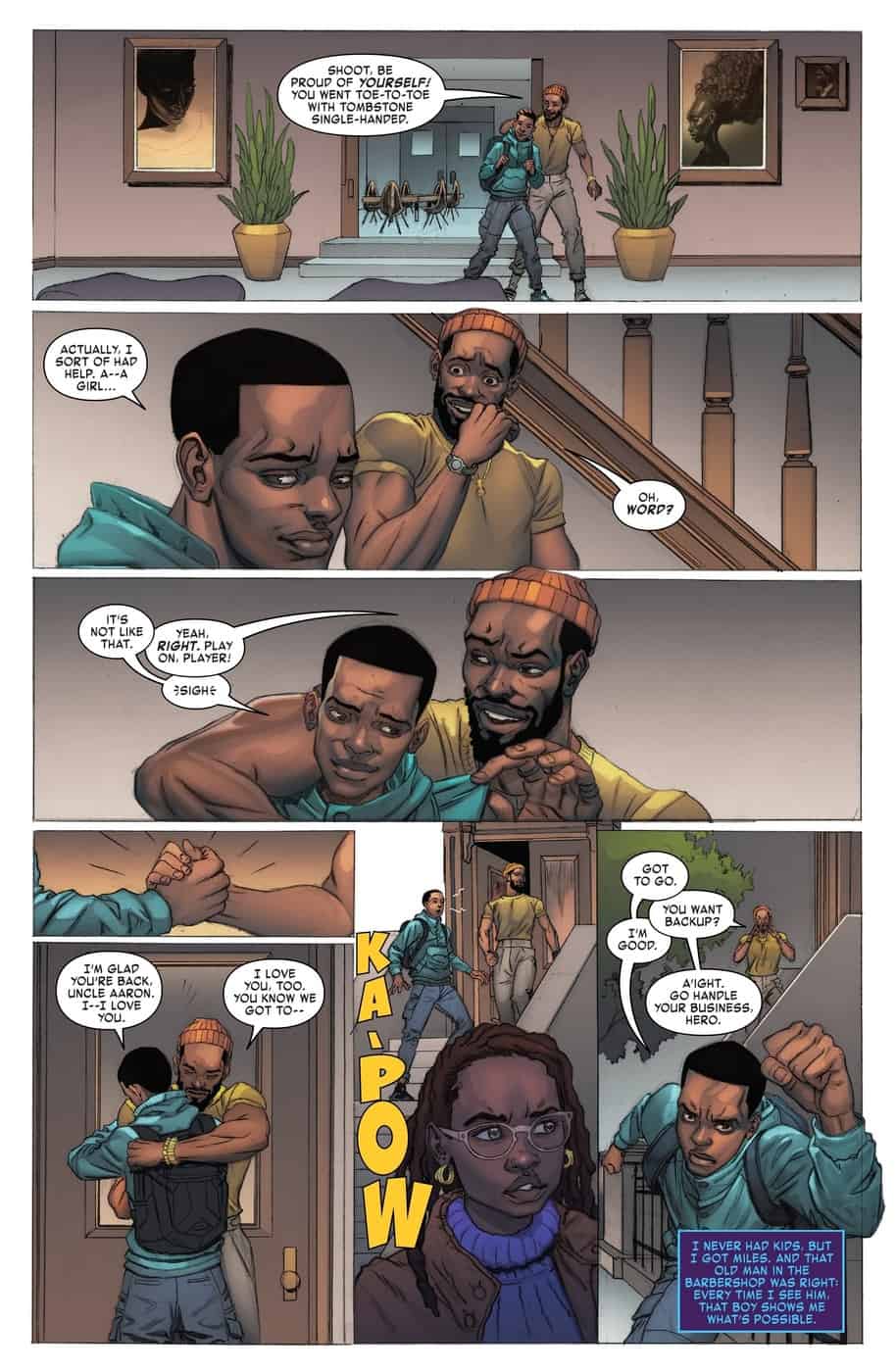 We start with Miles’ rather complicated uncle Aaron having returned to the mix. Though he had fallen back into his villainous ways with the Iron Spider suit, he once again promises that life is behind him. Coming right off of being dumped by his girlfriend Barbara, this immediately feels like we are diving into another complicated relationship for Miles. Speaking of, the return of Lana’s Bombshell is quickly proving to be complicated in its own unique way. There are obviously feelings there. It’s only a matter of time before they manifest themselves in a (probably) unhealthy way.

There is an unknown drone attack that was almost certainly sent to simply gather information (did anyone watch The Incredibles?! Come on!), but Spidey couldn’t stay too long because of this super important brunch with his family. This is where things get good. All of the drama and excitement that has happened throughout the issue so far crumbles beneath the weight of the announcement at brunch that Miles’ parents are expecting another child!

What a hell of a day for Miles Morales, and the worst part? That isn’t the end of it! After handling the announcement remarkably well, Miles leaves the restaurant only to be outmatched and abducted by an unknown foe. Can things really get any worse?

Approaching the story from a character-driven perspective has proven to be a tried and true method for Miles, but writer Saladin Ahmed is hitting early Bendis levels of greatness with this series. It feels authentic to the character and the drama is both relatable and distinct. It isn’t about Spidey just punching bad guys and I really appreciate that. But with Miles becoming trapped in some unknown person’s seemingly wacky experimentation at the end, it might actually be a great time start punching those bad guys!

The artistic direction is uniquely suited to the nature of the story, especially the aesthetic change we see when the brunch sequence happens about halfway through. It’s a bit unexpected at first, but it really does help to emphasize the surreal nature of their meetup. Going from the spectacle of Spidey’s fight in the city to an intimate meal is a drastic change that is handled really well. Despite a few missteps in character renders, the artwork succeeds when it needs to most. Plus, we get a magnificent cover from Patrick O’Keefe, who was the art director of SPIDER-MAN: INTO THE SPIDER-VERSE. If there are complaints, they are minor at best.

Overall, Miles Morales: Spider-Man #7 is a well-executed continuation of a truly remarkable series that is every bit as good as Ultimate Spider-Man. This is one fans absolutely shouldn’t miss!

'Miles Morales: Spider-Man #7' is a dramatic and dangerous look into the everyday life of Miles Morales, executed to near-perfection by a talented creative team.