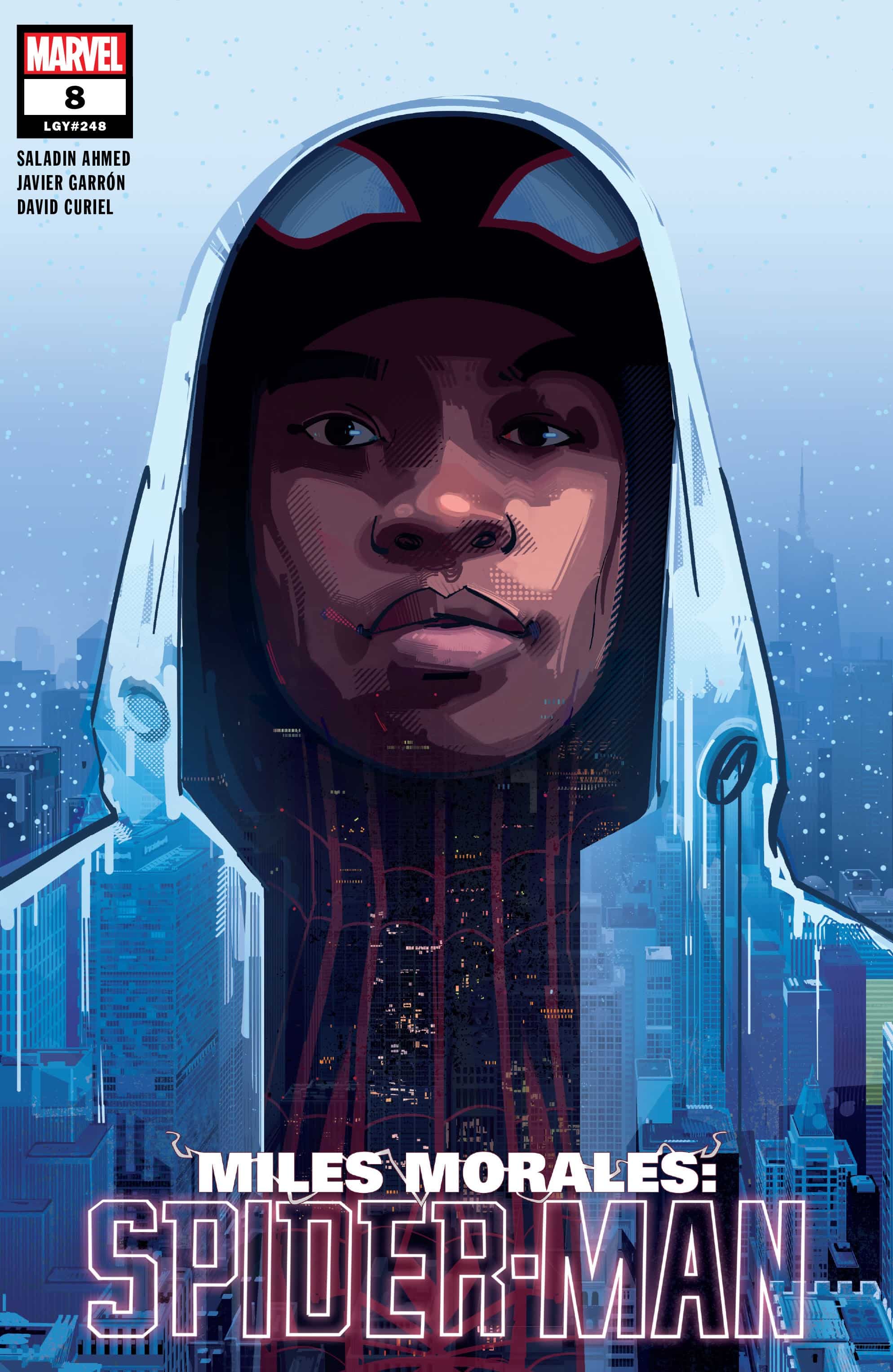 Miles Morales has been TAKEN! Grabbed from the streets by an unknown assailant, bound, tested and observed, like a bug under glass. Who is responsible?! And how far will they push Miles to protect his friends and family? Don’t miss this horrifying new chapter in Miles’ life as his rogues’ gallery continues to grow!

Miles could be over his head in ‘Miles Morales: Spider-Man #8’ as he struggles to free himself from the captivity of an unknown enemy, knowing his friends and family could be next on their list! 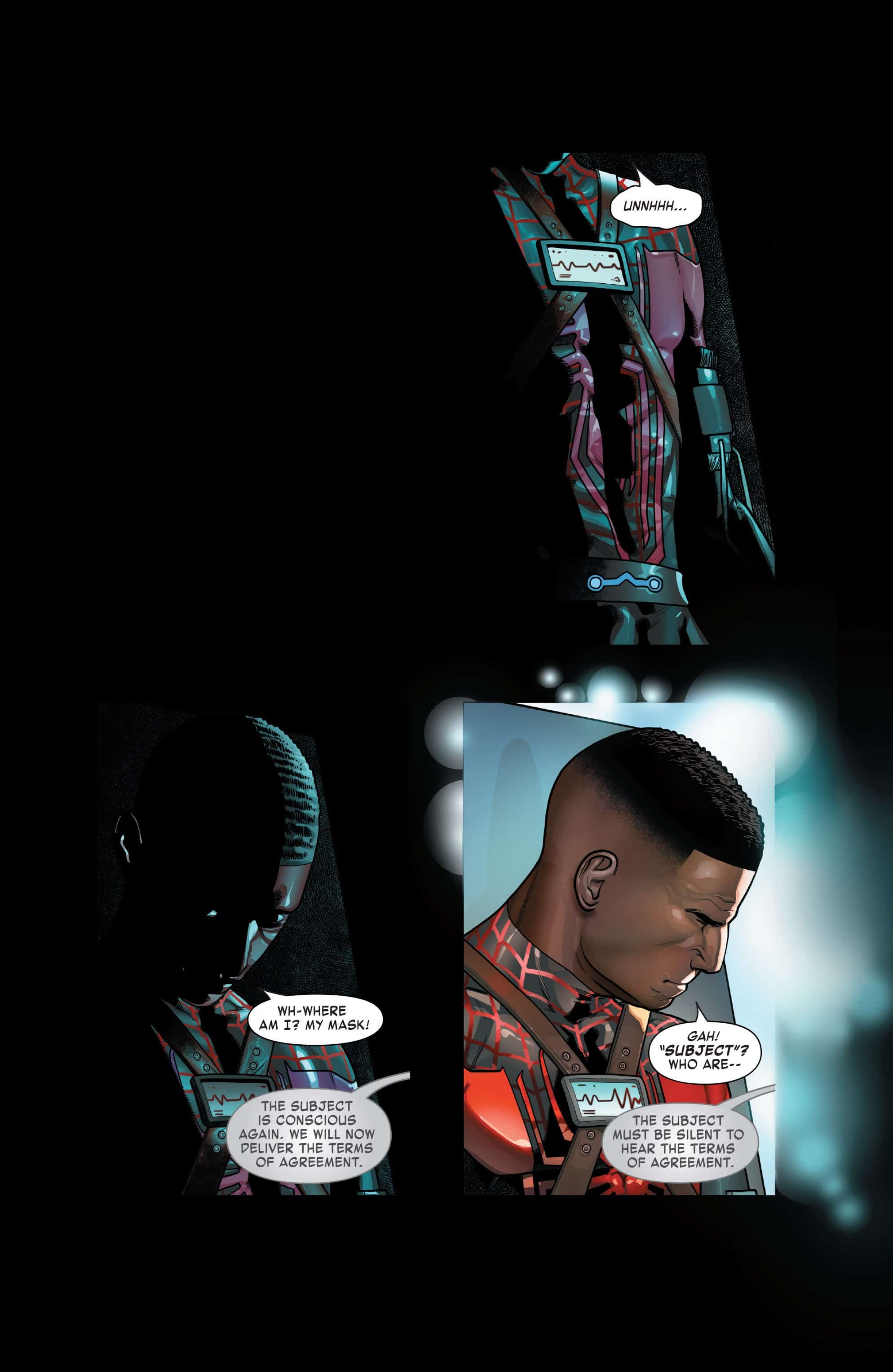 The creative team continues to tell a story that is both dramatic and daring following last issue’s bombshell news regarding Miles’ parents and their decision to have a baby. While we discussed this aspect in the prior issue’s review, the emotional depth of the series is nothing short of astounding. Saladin Ahmed and the rest of the creative team seem to have a fundamental understanding of what made Bendis’ run on Miles Morales so iconic, and they are putting their knowledge to excellent use every month.

The cast of characters surrounding Miles can often feel just as important to the series as he does, but this issue takes us back to the basics and focuses purely on Miles as he attempts to understand what is happening and ultimately, escape. Although he is mostly reactionary throughout the entire issue, the tension created through his various simulations will have you on the edge of your seat. It’s this masterful use of narrative pacing and panel layout that gives insight into the level of talent behind this series.

I’ve complimented the artistic direction for multiple issues now, but they have sometimes relied a bit too heavily on character expression in dialogue for my own liking. This issue offered a refreshing change of pace by essentially putting Spidey through his paces both physically and mentally. Despite being fundamentally a mystery story, issue #8 was able to capture an enjoyable blend between secretive plotting and pure action.

Unfortunately, the issue isn’t without it’s faults. This was truly a valiant attempt at a mind-twisting mystery involving Miles’ capture, but its predictability became apparent earlier than it should have. At a time where series like Rick and Morty dominate streaming channels, twists like this have started to lose some of their impact. The surprise ending simply didn’t have the shock factor it felt like it was trying to achieve, and while it wasn’t a deal breaker, it didn’t help the book go out on a high note.

Overall, despite it’s predictable nature, ‘Miles Morales: Spider-Man #8’ is a solid book in an increasingly excellent series. It’s a welcome change of pace for those worried it was starting to lose its focus, and will have fans anxiously waiting to find out where the story will go next.

Despite it's predictable nature, 'Miles Morales: Spider-Man #8' is a dramatic and vividly illustrated look into the true dangers behind wearing the mask. This one will have fans on the edge of their seats!