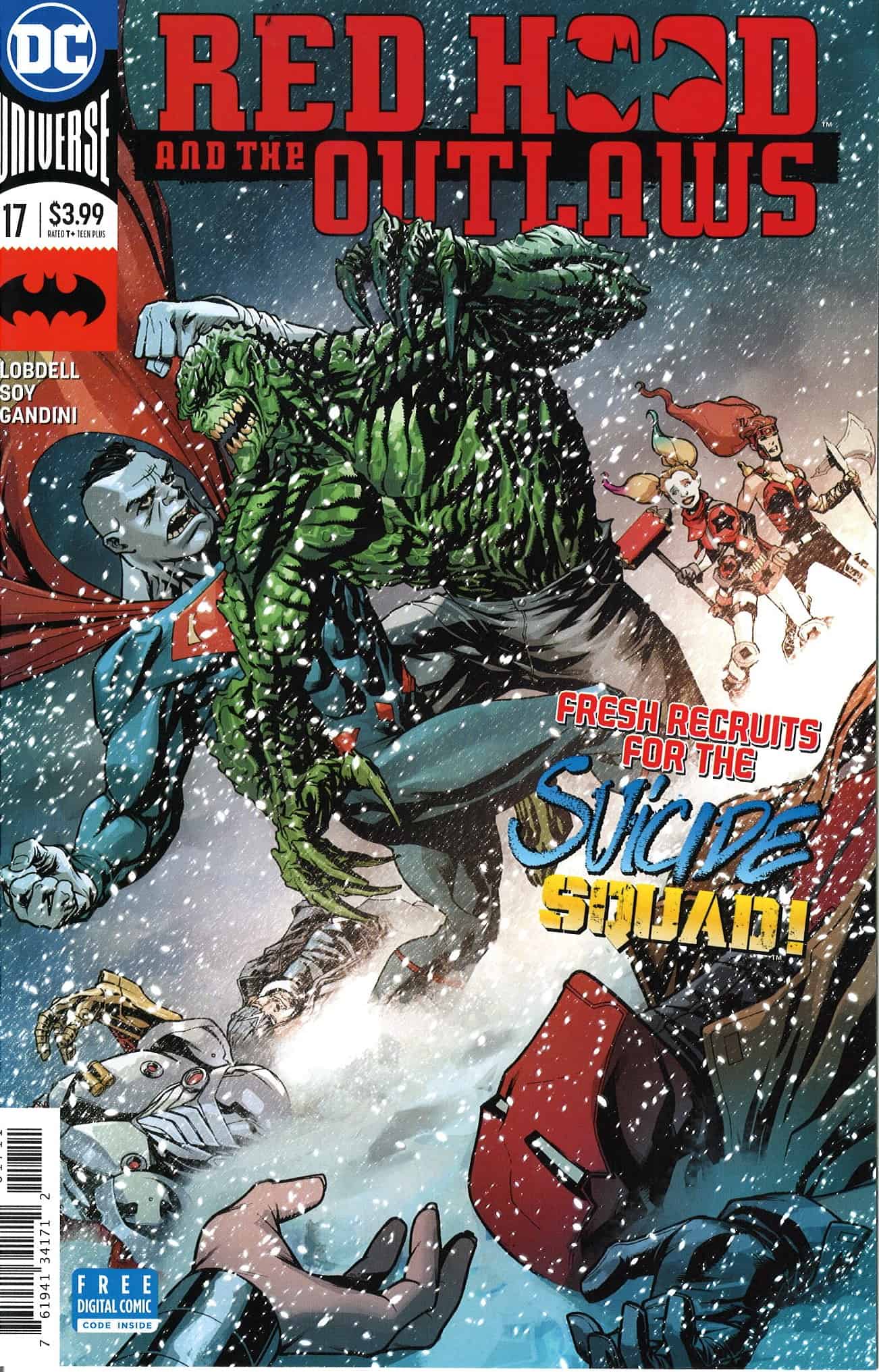 The Outlaws and the Suicide Squad are sent on a mission to the Arctic, and it’s anything but fun.


What You Need To Know:

While prisoners at Belle Reve Penitentiary, Bizarro was able to discover that an underground installation once owned by the villain Harvest has become unstable and threatens to explode. Because of it’s Arctic location, the explosion will set off a chain reaction along the Earth’s tectonic plates, killing millions. Confirming the discovery, Task Force X Director Amanda Waller assigns the Outlaws to work alongside her Suicide Squad to stop the explosion from happening.

Venturing into the Arctic region in search of one of Harvest’s secret bases, the Outlaws and the Suicide Squad begin to bicker about the cold until Bizarro melts a large section of snow, revealing an entrance to the base hidden below. Once inside, the automatic generators kick in and the two teams attempt to check-in with Amanda Waller. Unfortunately, the compound’s structure weakens their signal, forcing Waller to tell them that they’re on their own. Bizarro quickly takes charge, assigning teams of two to tackle various goals such as gathering resources left behind by the last regime, searching for any lingering Harvest prisoners, and shutting down the compound’s energy core. When Captain Boomerang and Deadshot challenge Bizarro’s attempt at taking charge, he asks them who is their team’s field commander. Harley announces that she is, and that she agrees with Bizarro. The group then disperse in various directions to fulfill their tasks.

It doesn’t take long before Killer Croc and Red Hood discover a dead, frozen Harvest tied to a large cross. 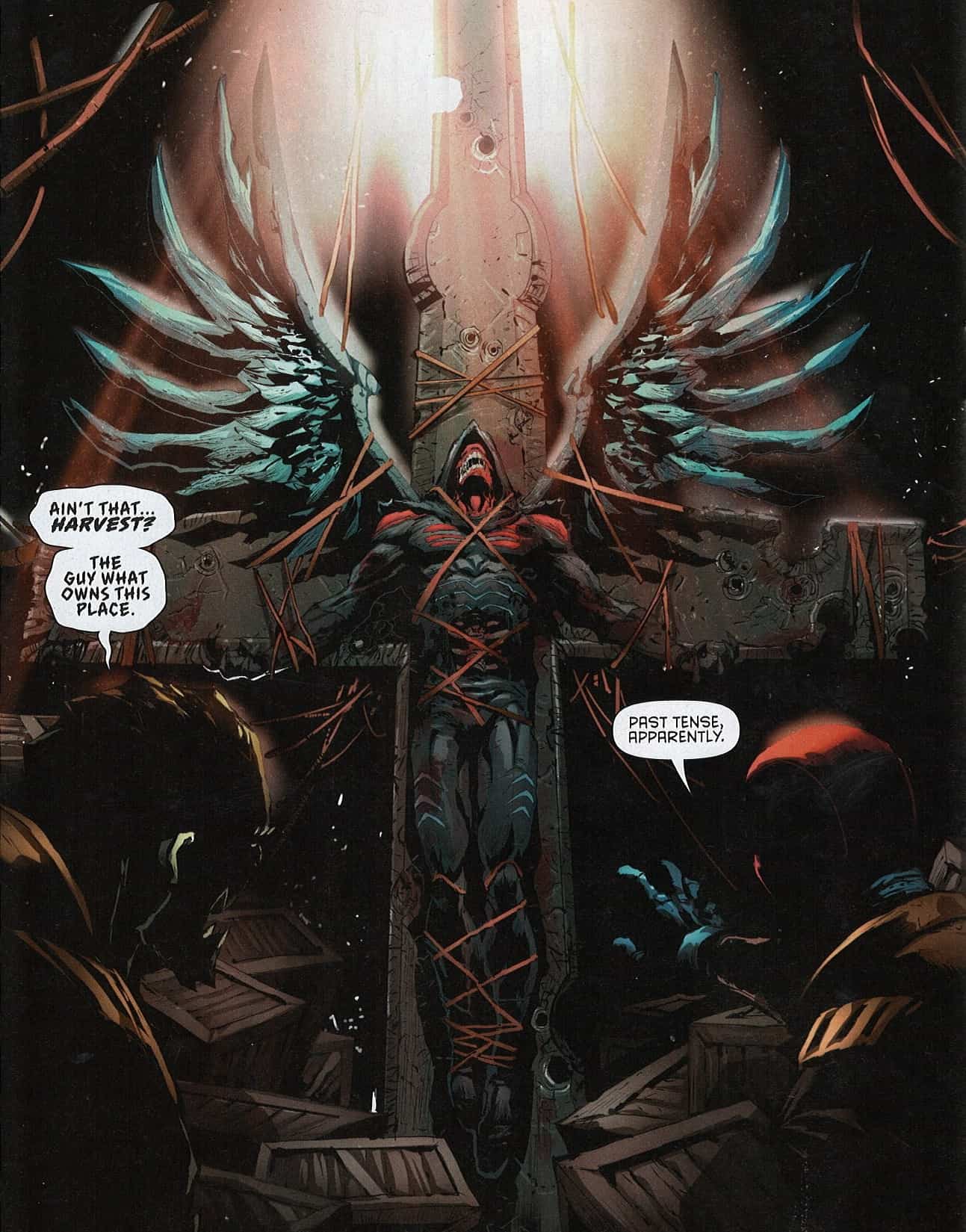 Unsure of who killed him or why they move on to acquiring the various weapons and other resources left around him before the complex explodes. While foraging, Killer Croc tells Red Hood that he sees right through his bad boy facade. He gives him advice on turning his life around before it’s too late. 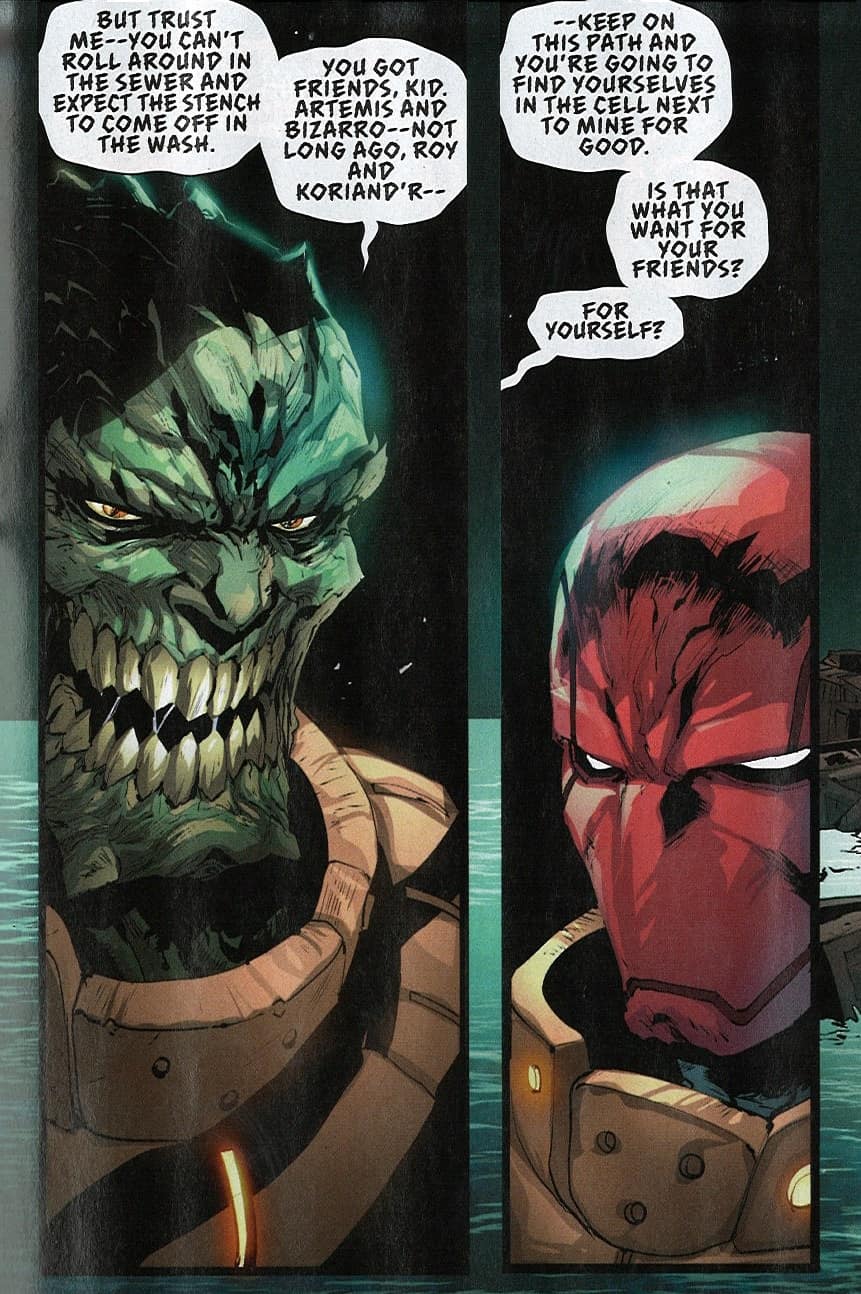 Not willing to show a soft side, Red Hood asks Croc if he just wants to split the items they found between the two of them. Killer Croc says yes.

Artemis and Harley Quinn come across a large bloodied chamber while searching for surviving prisoners. When Harley makes light of it, Artemis turns on her, asking her if she ever takes anything seriously. Harley lets a bit of truth come out when she tells Artemis that she still has her freedom, but that Harley does not due to the explosive implanted in her head. Artemis drops her anger toward Harley and sits to pray for the lives lost in the room they found.

Bizarro, Deadshot and Captain Boomerang manage to locate the central reactor area. It’s here that Bizarro tells his Suicide Squad teammates that Harvest previously had another Superman clone held captive. Because he didn’t want the other clone to revolt, Harvest designed the core to eradicate any Kryptonian DNA that entered into it. Because of this, Bizarro stays outside of the reactor and instructs Deadshot and Boomerang on what needs to be done. The two of them then cripple the core, shutting down the installation from exploding.

Returning to Belle Reve, Amanda Waller refuses to allow the Outlaws into the prison. 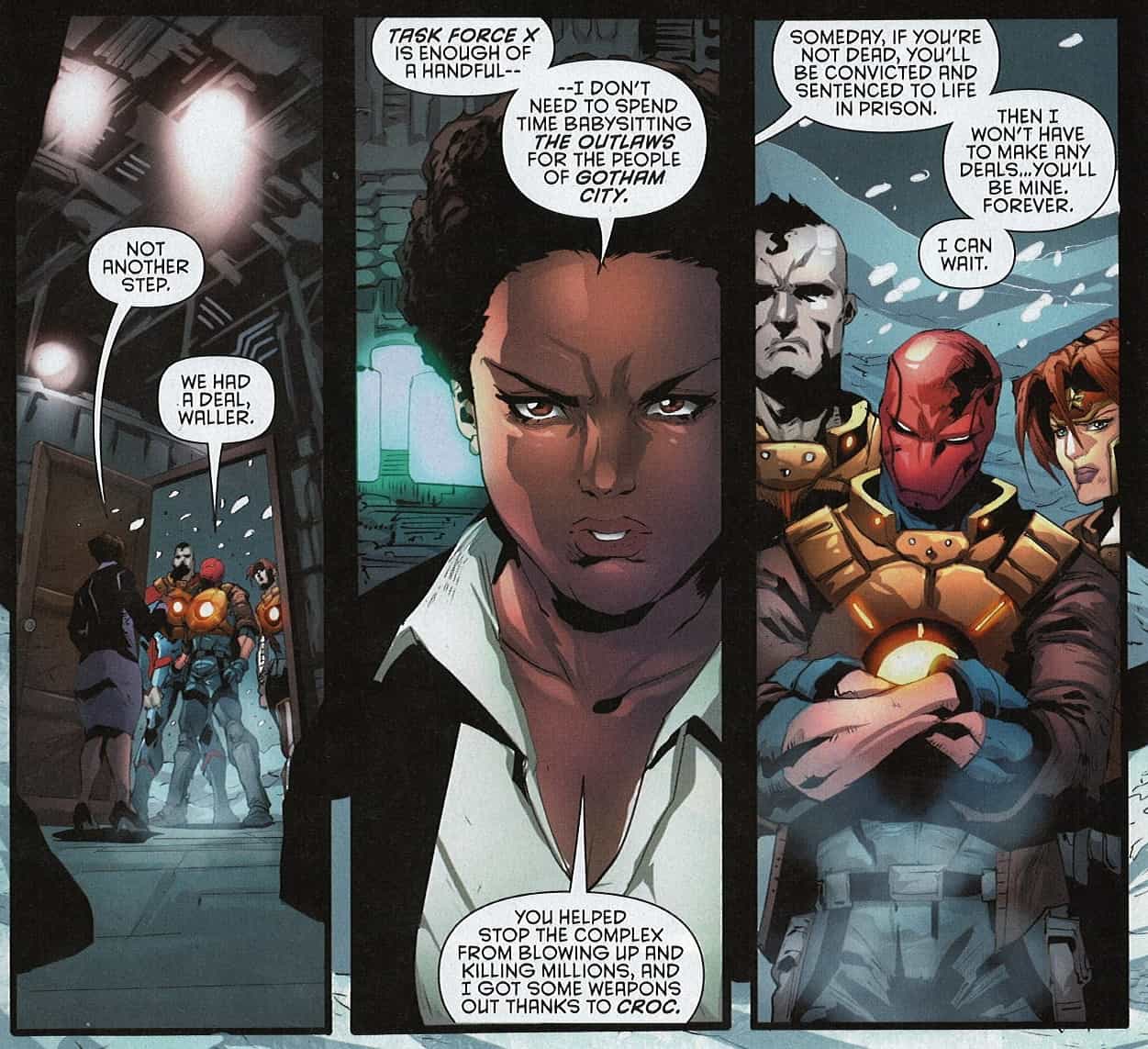 Waller tells them that they are free to go back to Gotham City, but that due to the nature of who they are, she expects to see them return in time. Back in Gotham, Red Hood takes inventory of the new weapons they’ve acquired from the Harvest compound. Artemis joins him and they both agree that Bizarro has finally come into his own.

Looks like the Red Hood team got off scot-free from their recent prison stay and are now back in Gotham City to do what they normally do: take out other criminals.

The Outlaws are also discovering more and more about Bizarro, now that his intellect has been augmented. In his latest revelation, Artemis shows surprise when Bizarro reveals he now has telescopic night vision.

Final Thought: Honestly, this issue felt very much like a filler to me. Between this issue and the last two other issues, it’s almost as if the editors told the Red Hood creative team to do some cross-overs with other popular characters in the DCU to garner extra interest in the title. While I really loved the interaction the Outlaws had with the Batman Inc. team as it seemed organic and natural to run into other caped crusaders in the same city, their interaction with the Suicide Squad felt disjointed and forced. There wasn’t a real layout of which characters were essential, what their motivations were, what distinguished them from other bad guys, nor hardly any character ties between the two teams aside from a couple Artemis/Harley scenes and one Killer Croc/Red Hood moment. 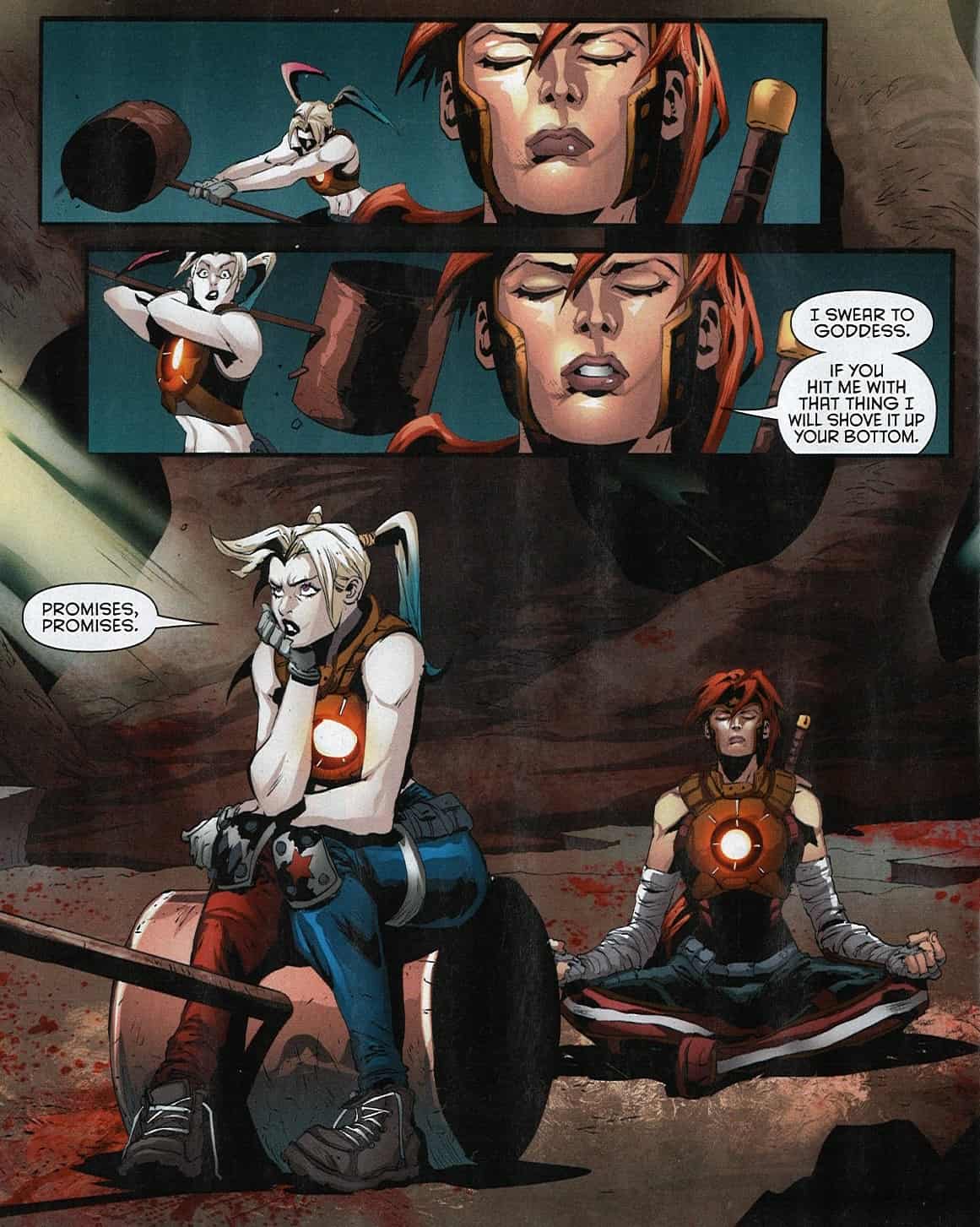 The banter between Artemis and Harley was a nice spot of much needed comic relief. Typically, the Odd Couple pairing of funny man/straight man characters has worked well for duos like Abbott and Costello, Laurel and Hardy, and Penn and Teller. That said, pairing the crazy clown Harley Quinn with a strict no-nonsense Amazon like Artemis just makes sense.

Seeing Red Hood and Killer Croc relate to each other and their shared friends was a nice touch as well. They bond slightly over their shared friendship with Roy Harper, the costumed archer called Arsenal. Croc tells Red that he sees him occasionally whenever he needs a drink between adventures with the Titans team he’s currently working with. The heart-to-heart that follows in which Croc tells Jason that he needs to reexamine his life and focus on what’s really important elevated the comic a bit. It’s actually my favorite part of the issue.

While this issue wasn’t bad, it also left a lot to be desired with the quicky wrap-up ending that honestly wouldn’t have held water in any other instance. Amanda Waller isn’t a character who would let powerful assets leave her service so haphazardly, so seeing her allow the Outlaws to return to Gotham City with no strings attached seemed a bit far-fetched to me. Especially from trying to understand the legal paperwork aspect. Just a total head-scratcher.