Mister Miracle: The Source for Freedom #1 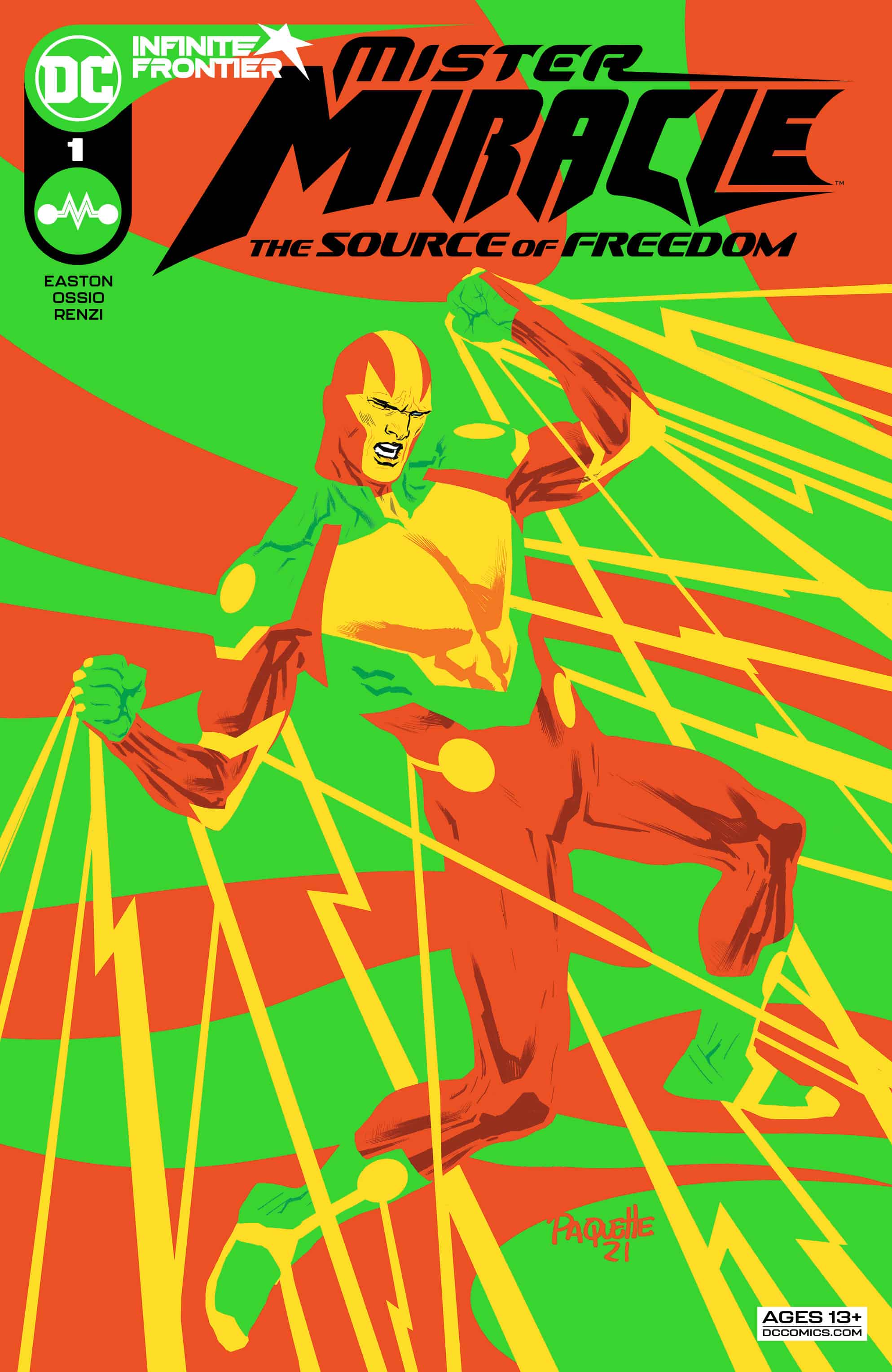 Spinning out of DC Future State, the story of how Shilo Norman became the Mister Miracle of tomorrow starts here. The Mister Miracle show used to be the hottest ticket in town, whether you caught him onstage escaping from perilous traps or spotted him on the streets of Metropolis taking out bad guys. What Shilo Norman forgot is the first rule of both showbiz and super-heroing: always leave them wanting more. Now it's time to start showing the world what a miracle man can do. Showbiz/superhero rule #2: timing is everything. There's a new performer in town who wants to knock Mister Miracle off his pedestal and stake a claim to his famous moniker! Can Shilo break free of this trap? (Why yes, that is a clue.) 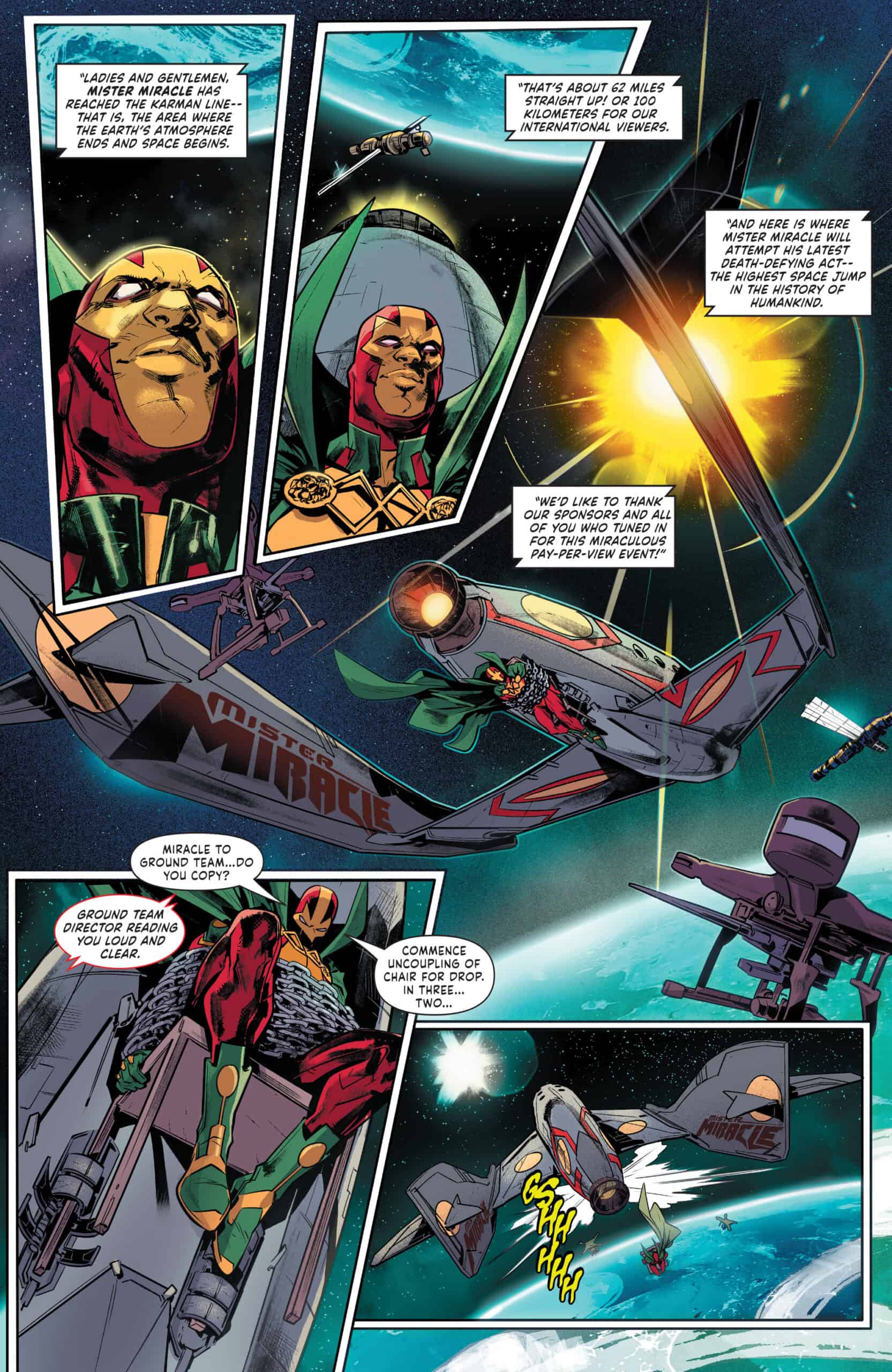 Readers were introduced to the supplemental stories, DC Comic’s Future State event left the reader with Mister Miracle on Warworld. Like many of the Future State titles, I was left asking how and when do we get here? Brandon Easton aims to explore exactly that in Mister Miracle: The Source of Freedom. I am new to Mister Miracle with limited knowledge. I am familiar with Tom King’s series with the character. King’s run focused on Scott Free, a New God, and the second person to hold the Mister Miracle mantel. Easton’s series follows Shilo Norman, who took over from Free. While Norman is not a new character, Mister Miracle: The Source of Freedom #1 breathes new life into the character and is exactly what you want out of a comic book in 2021.

Mister Miracle is the world’s, and maybe the multiverse’s, greatest escapist. This is immediately apparent when the issue opens with Mister Miracle shackled at the edge of our atmosphere about to be dropped. He escapes, of course, in the end in spectacular fashion, but the opening pages and panels do an excellent job demonstrating one of Mister Miracle’s biggest obstacles: fame. While Mister Miracle’s stunt set pay-per-view records, his career seems to be at a plateau. His action figures aren’t selling and people are losing interest. His agent gives him two options:

A superhero revealing themselves to the public is a huge deal. When his agent suggests that he doesn’t want to unmask himself because he is black, Shilo Norman tells him that it’s the mystery behind who is manning the Mister Miracle name that brings people back with their wallets. However, we later learn that Norman being black does play a role. He flies away to fight crime telling his agent, “And you’re right about one thing… you can’t pretend to know what it’s like a black guy in this world.” This rings true to many readers, including me.

One thing I really appreciated about Mister Miracle fighting crime in Metropolis is that we are shown a different side of the city. We often think of the bright and familiar art deco skyline that is a backdrop to the hope-inspiring Superman, but Mister Miracle is working to help another side of Metropolis. Fico Ossio’s art and Rico Renzi’s colors are a force to be reckoned with and add some much-needed grit to the depiction of the city. All is not well in the city, just like how all is not well in our real cities.

With footage and pictures from last summer’s protests on his monitors, Mister Miracle later tells his agent, “No, it’s not 1969. It’s 2021. And we’re still stuck with Jim Crow. I’m shackled by the constraints of low expectations. None of that matters when I’m Mister Miracle.” Powerful and truthful statements like these make this issue a must-read and demonstrate the complexity of the character. He continues, “When I wear that costume… it’s the only time I ever feel “free.” As Mister Miracle, Norman can save a building full of people. As Shilo Norman, women see him walking and hold their purses a little tighter.

The issue concludes with Mister Miracle returning to his apartment only to find it ransacked. A figure reveals themselves to him and introduces themselves as N’ver Free, the son of Scott and Barda Free, “The true inheritor of the Mister Miracle mantle.” N’ver Free’s name, like Scott Free, is a play on words, but this time it feels a lot more relevant to Shilo Norman’s relationship to “freedom.” While the character has the potential to be interesting and pivotal to Shilo Norman’s growth as a hero and man, I am hoping that N’ver Free isn’t written simply as an anti-Mister Miracle.