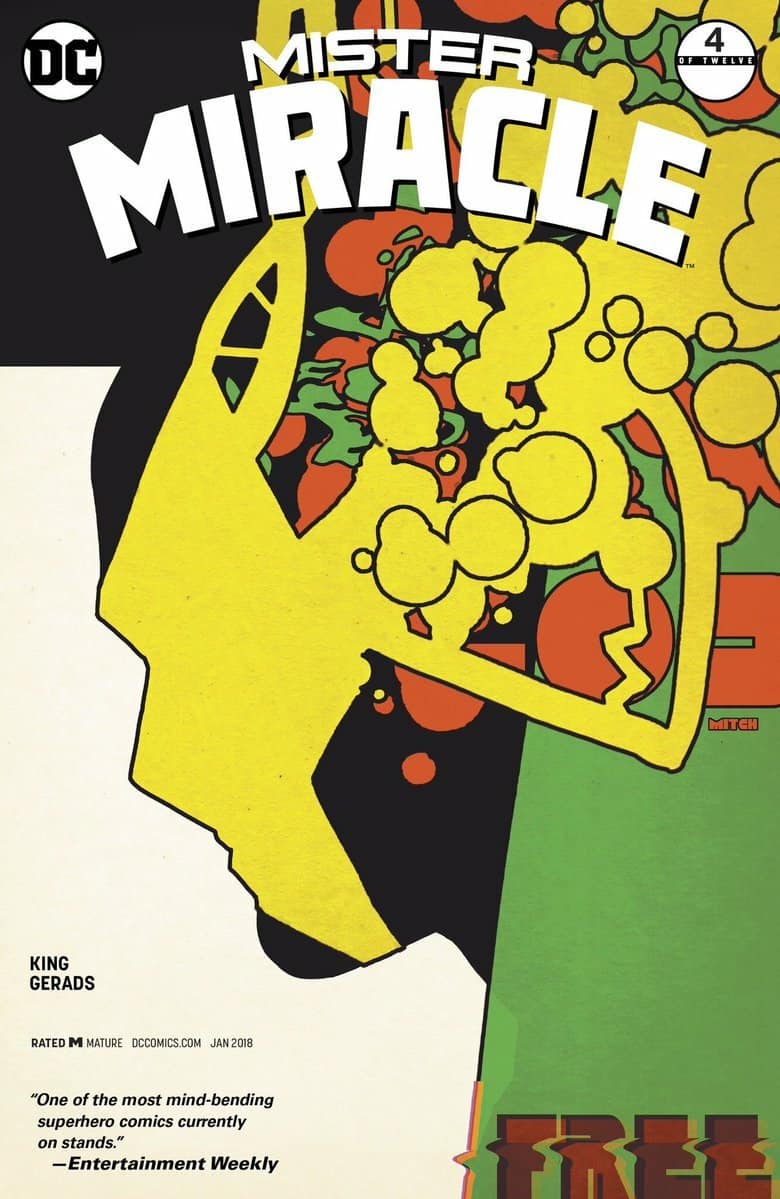 The time has come for Scott Free A.K.A. Mister Miracle to plea his case against Orion and convince him that he is not an agent of Darkseid, but Scott may need some help due to his overwhelming anxiety and PTSD like symptoms. Has the best escape artist in the known multiverse finally met his match? Or can Scott free himself (no pun intended) from the grips of war or will this be his final trick.

What You Need to Know:
Mister Miracle and Big Barda have been living on Earth enjoying the simple life when one day everything is brought to a halt when Scott attempts Suicide! After waking in a hospital Scott learns Darkseid, the King of Apokolips rages war on their homeworld of New Genesis. When Scott learns that Darkseid has the “Anti-Life Equation,” a way for him to manipulate reality and warp the minds of anyone he pleases, he’s troubled, but can’t just sit around, so Barda convinces an anxious Scott to go fight as a General in Highfather’s army.

As the General, Scott takes on a small army and goes about doing whatever his higher up Orion asks of him. After going back to earth between battles he learns that Highfather has been killed. Distraught, Scott has a hard time concentrating on anything due to his raising anxiety and paranoia. The newly appointed Highfather, Orion, gives Scott and Barda the biggest mission of their lives, Kill Granny Goodness! Scott and Barda design a plan to bring down their once mother-like figure, and when Scott is finally face to face with her she tells him she knows about the mission and tries to convince Scott to let her go until Barda finally hits her from behind bringing down the devilish Granny Goodness once and for all.

Now that Orion has become Highfather he must make a name for himself, so the first thing he does is dig up Granny Goodness’ body and decapitate her, so he can keep her head as a trophy. Meanwhile, Scott is having a harder and harder time with his symptoms. Scott awakes from a slumber to Forager on his couch. Forager goes on to tell Scott that the new Highfather is destroying the bug people’s population by sending them to the front lines. Forager pleads with Scott to lead his people because Scott cares, but before Scott can say anything Lightray appears from a boom tube and kills Forager for disobeying Orion. Scott then decides to confront his new Highfather, and when asked about the anti-life equation and if it may be inside Scott or even possibly Orion himself as well, Orion replies with a few stunning blows and a question, “Have you ever seen the face of God?” and lifts his helmet and says “This is the face of God.” As Scott starts to freak out again and an unknown narrator leads us to a whole new set of questions. 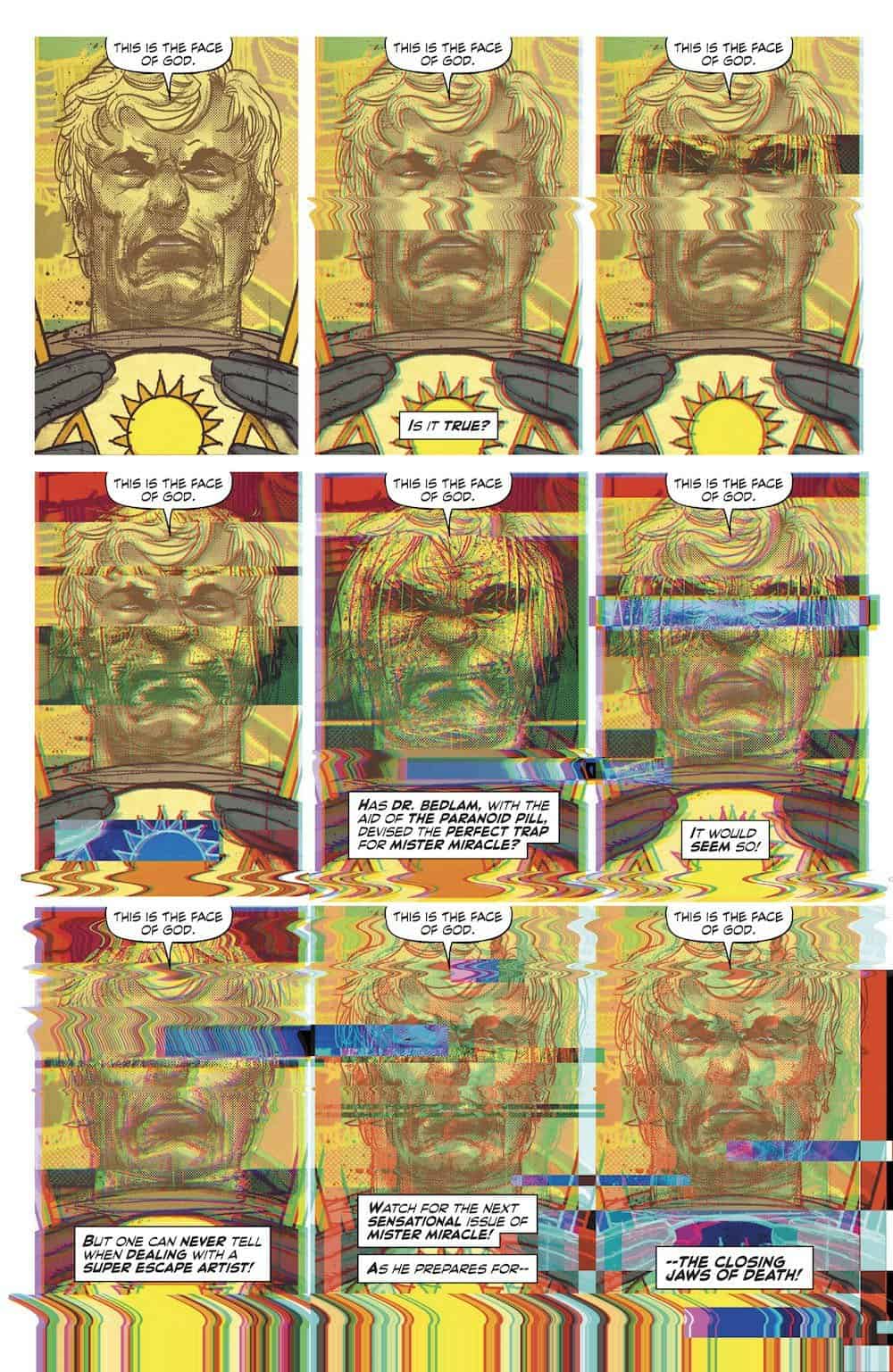 What You’ll Find Out:
In this down to earth issue, we find Scott waking up a little banged up, either due to his earlier confrontation with Orion, or just wounds from battle. Scott awakes to Barda trying to convince Lightray to leave, but he insists on to telling Barda he’s just here on behalf of Orion. After sixteen trippy panels of Scott and Barda sitting watching T.V. and Scott’s next performance, we see the newly appointed Highfather appear via boom tube into Scott’s living room where Barda offers him a vegetable platter. 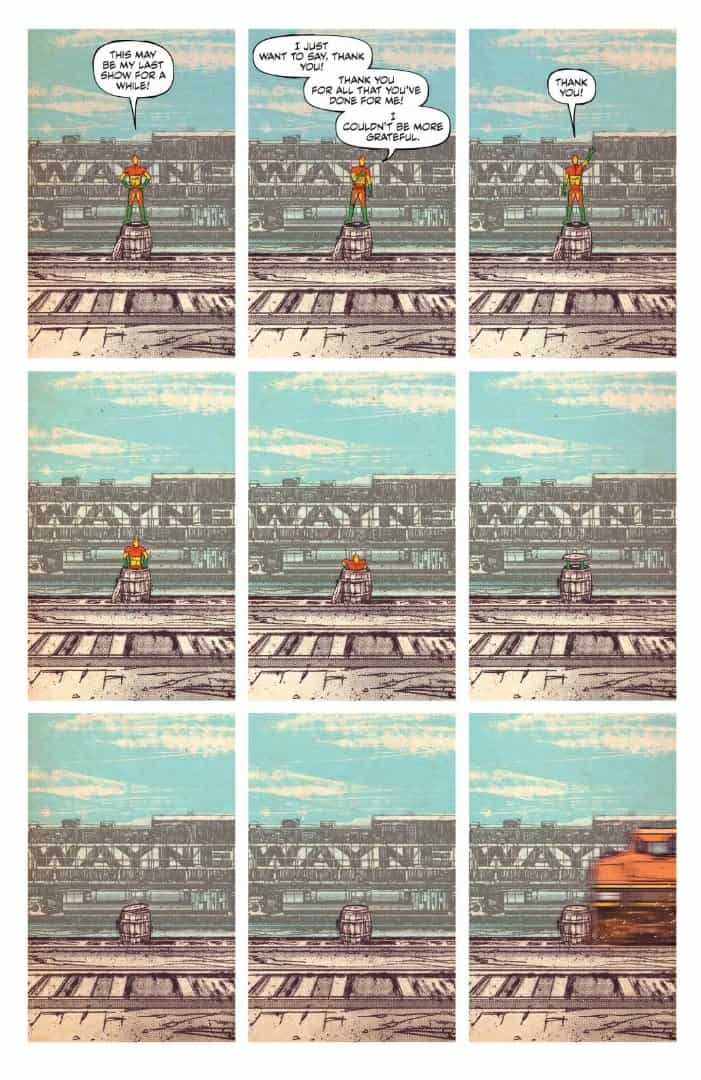 Once Orion has established his reason for being here (which is to judge Scott on if he is or is not an agent of Darkseid with the Anti-Life equation running through his veins), he proceeds to ask Scott true or false questions that he must answer without any doubt. After a few intense pages of questioning, and a couple humorous panels of Barda, Lightray and “a security guy” uncomfortably sharing a couch, Scott finally snaps leading to the event we have all been waiting for since issue one where Scott loses it on Orion and knocks his helmet off in one good punch. 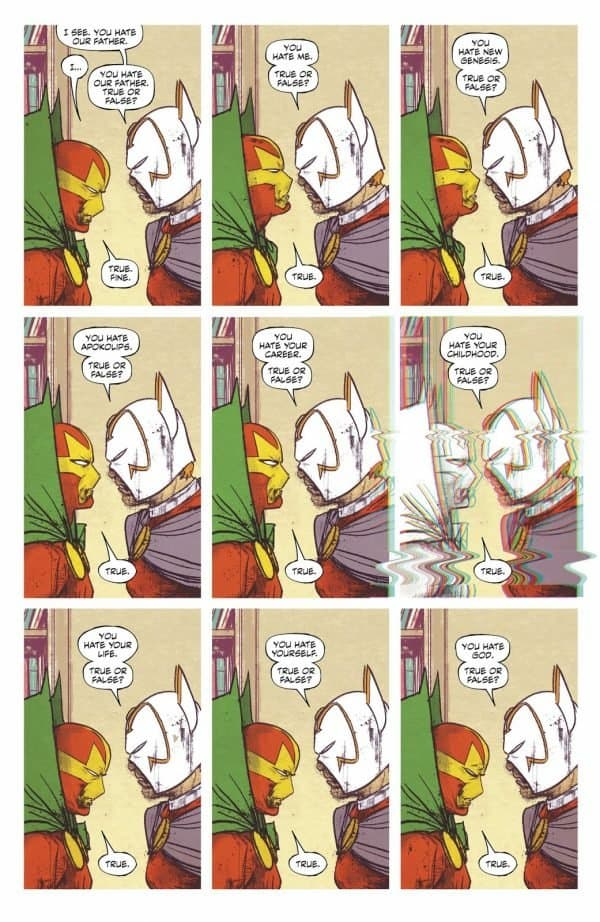 Stunned, Orion gets up. Enjoys a ranch dipped carrot and leaves to prepare for Scott’s now inevitable execution.

What Just Happened?
Wow. That’s almost all I have to say about this fourth issue, a quarter way into the story and the world that’s being built and destroyed all seems so real, yet so imaginary. After three issues with very much to say this issue lacks in the content but makes up for it in pure intensity and use of characters. Scott King continues to bring Jack Kirby’s Jesus down to earth where he seems like an enjoyable guy that I too would love to take an Instagram picture with if I bumped into him on the side of the street.

Mister Miracle takes the fourth world and puts it in its own self-contained story that I have yet to see any connection to any other part of DC continuity, which works for the type of story they are telling. With so many characters dying and being replaced, and all the big changes to the fourth world it would truly surprise me to see DC try and fit this into any kind of true continuity and in my opinion this book only works if standing alone. The feeling you get reading this book almost makes you feel like you are inside Scott’s head, As he heads down a dark and intense path we follow him in one of the most gruesome versions of a “war” I have ever seen used in a superhero comic. This book shows the parts of the story we never hear about, how do these events affect our characters, and what kind of consequences will those effects have on the character? These questions are envisioned perfectly within this book with Mitch Gerads art giving you a sense of misdirection and an unsettling feeling as you read what unfolds.

This story’s use of PTSD and extreme anxiety makes Scott even more of a relatable character that you are constantly rooting for, hoping to see him triumph over his weakness. The feeling we still don’t actually know what’s happening with Scott also makes this series just that much more exhilarating, is Scott truly an agent of Darkseid being controlled by the Anti-Life equation? Or is this truly just post-war PTSD? Maybe Dr. Bedlam has slipped Scott his paranoid pill, or Scott is truly seeing death after committing suicide. These are the questions that keep me and hopefully many more reading this intense story.

Final Thoughts: Even though not a whole lot happened in this issue, it truly makes up for it in the use of characters and their vigorous dialogue. Even with a small cast of characters this issue just goes to show that you can still have just as nail-biting and intense of an issue as one where an elderly woman gets decapitated, or our hero tries to commit suicide. Tom King makes Scott Free and Big Barda the power couple I can’t wait to catch up on every month, and it just wouldn’t be the same without Mitch Gerads explosive and psychedelic art. I recommend this comic to old and new comic readers alike, and even when it feels like you have no idea what’s going on you just can’t help but enjoy the ride.