The Calm Before the Storm (Mister Miracle #5 Comic Review) 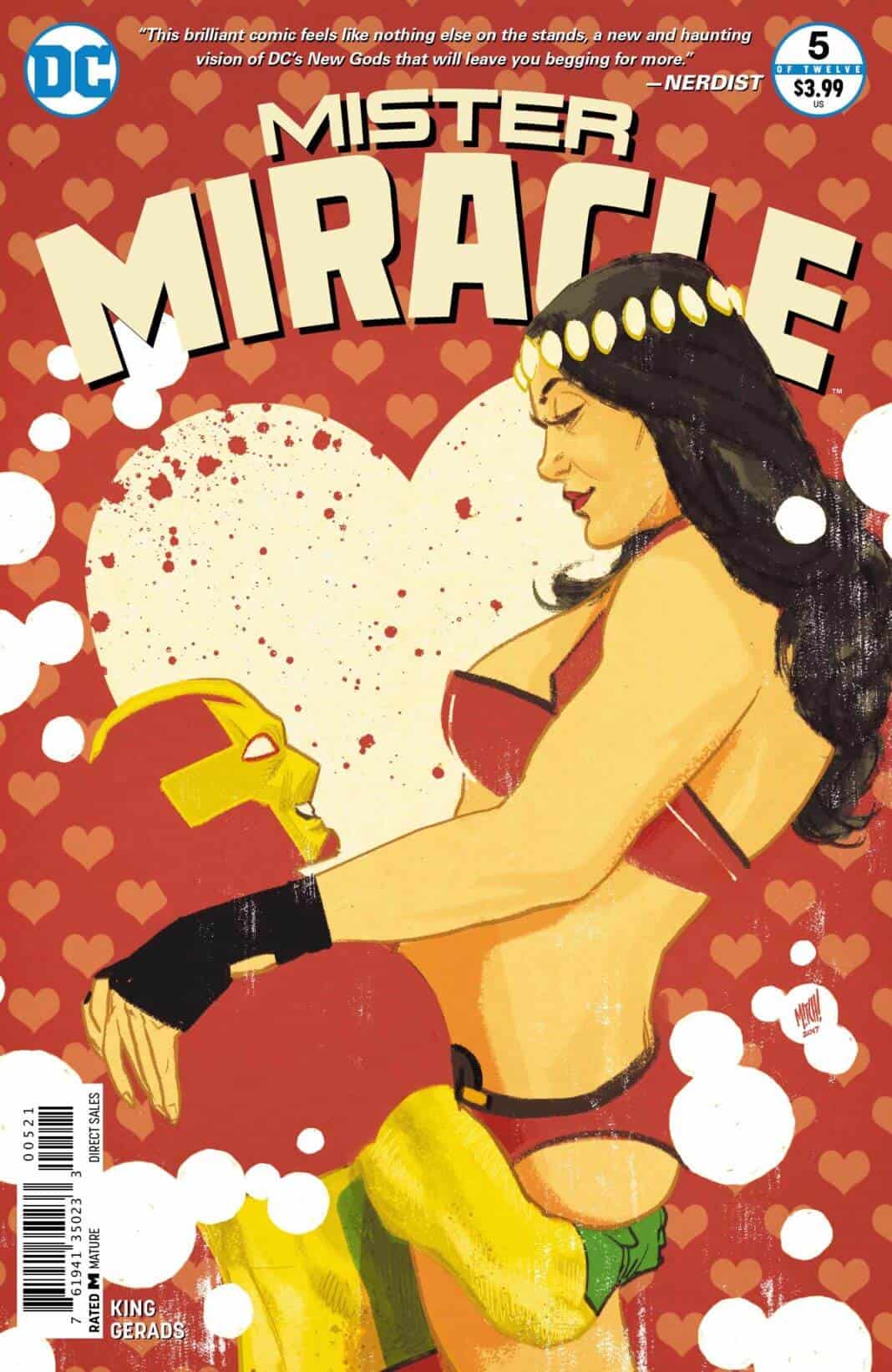 Scott Free has been sentenced to death for treason against Highfather. Scott and Barda spend their last day together, and what an emotional day it is.

The original Highfather of New Genesis has fallen, and Orion, son of Darkseid, though raised by Highfather, has taken the throne. During an all-out war with Apokolips, Scott Free is recruited back from earth to serve under the new Highfather. When Scott finally loses it on Orion, he is sentenced to death for being a possible pawn of Darkseid, with the anti-life equation possibly running through his veins.

Scott Free and Big Barda have lived happily married on earth together for a while now. Until their happiness came crumbling down when they are recruited by Orion, the new Highfather of New Genesis, to fight against the army of Apokolips. As the War ravages on, Scott starts to notice an unsettling feeling (shown by glitching panels and blank panels reading “Darkseid is.”) but decides to keep it bottled inside, only telling Barda about how he feels. After losing both the original Highfather, his friend Forager and Granny Goodness (the woman that raised him on Apokolips) Scott has begun to feel numb to the pain this war has brought. After being assaulted by Orion numerous times since the war started, Scott finally lets it all out when he calls out Orion and assaults the newly appointed Highfather. This action causes Orion to confirm his suspicions that Scott had been taken over by the anti-life equation and is being controlled by Darkseid as a spy for Apokolips.

What You’ll Find Out:
This issue marks the last day before Scott Frees execution ordered by Highfather Orion. So Scott and Barda decide to do what anyone else would do with their last day on earth, live! That is exactly what they decide to do, as we see the one thing Tom King is best at, humanizing his characters. Scott and Barda go on to do everything from throwing balls at bottles at a fair, to sitting and watching the sunset, 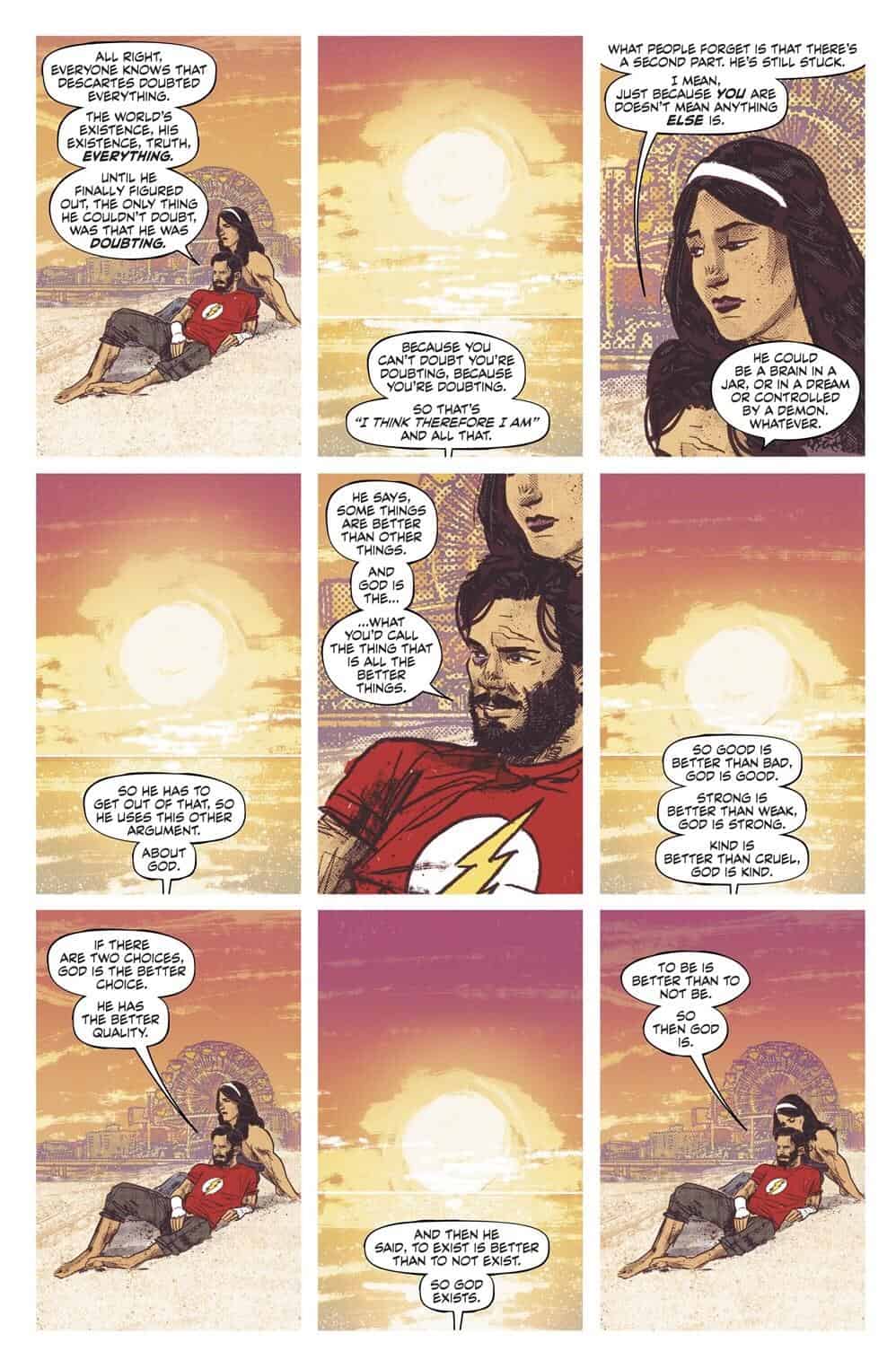 to tying each other up and having what looks to be some intense sex. Even having brunch seems like such a simple thing, but Tom King’s dialogue and Mitch Gerads art brings a special vibe to any setting they place these characters in, putting all your attention on the characters while still letting you focus on their surroundings.

The only other story being told through this issue is what Funky Flashman has planned for Scott. Early on Flashman tells Scott and Barda that Scott is too popular on earth to be executed. He derives a plan for Scott to fake his death on record so Orion can see his death, but if Scott wants he can still live a peaceful life performing stunts on earth. In the final pages Flashman boom tubes into Scott’s house interrupting him and Barda, and before he can even get his entire plan out of his mouth a nude Barda beats him to death before admitting to Scott that she just wants him to stay there with her. 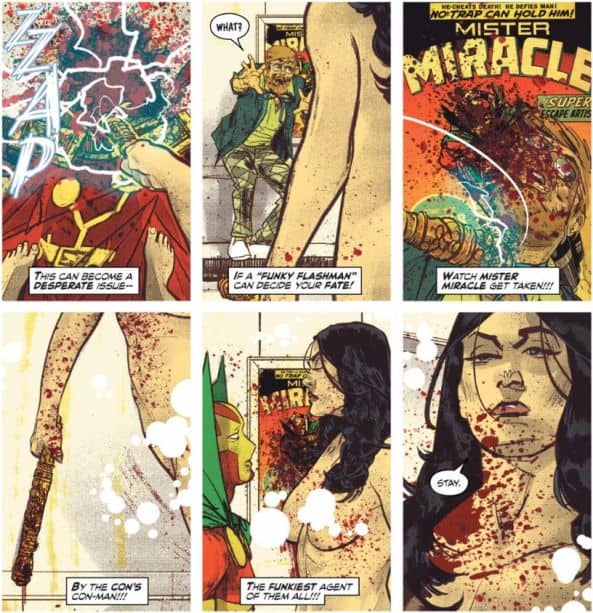 The fifth issue of this twelve-issue series sets up for the first big climax of the series, and it couldn’t have been a more emotional trip. From all the big sexy scenes to the casual tear-jerking moments, everything can be found in Scott and Bardas date night. From sitting on the beach to a casual brunch ( I like to think Scott is interested in brunch while Barda doesn’t understand it, and thinks it’s nonsense) the attention to detail is what gives this issue its spark.

Gerads does a phenomenal job showing the emotion that Scott and Barda try to hide. With small details like tears running down their face during a tense conversation, or even the fact that I’m pretty sure Scott hasn’t shaved throughout the five issues because his beard appears to be getting longer. 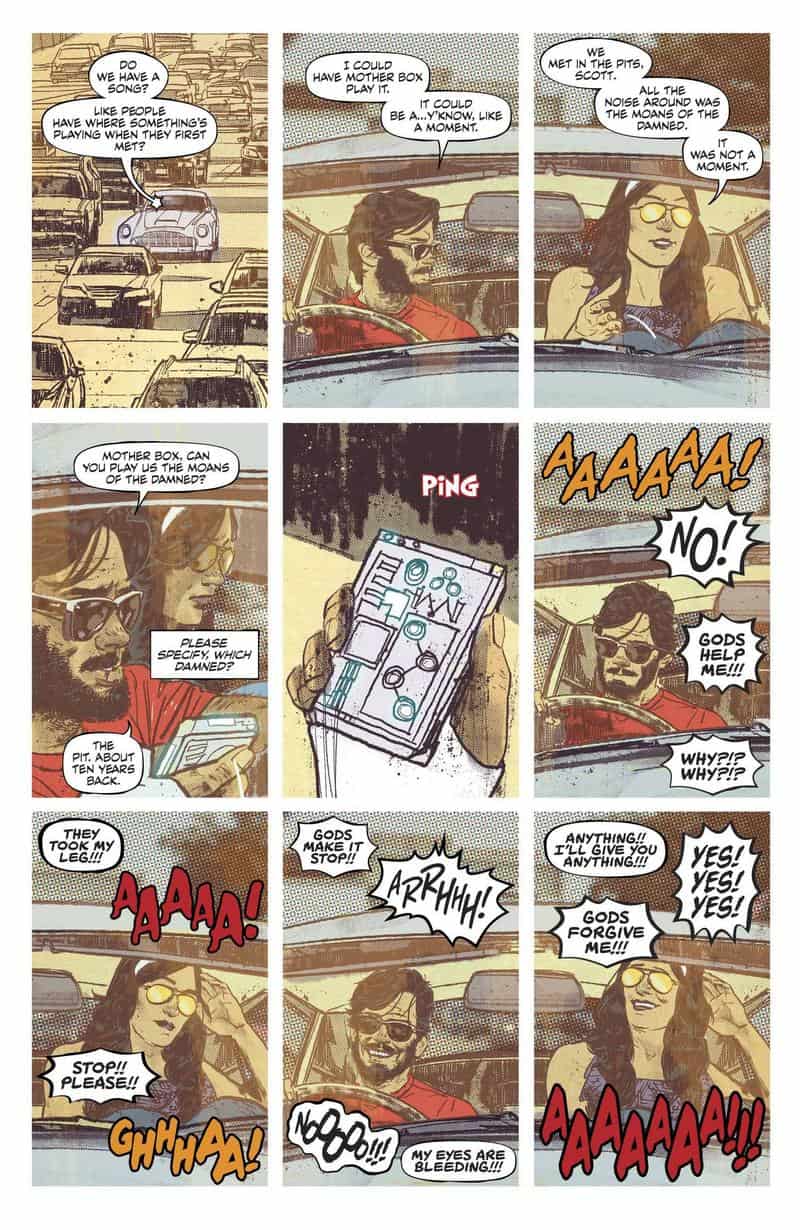 Everything about the art just brings this story to life, Giving it a sense of realism you don’t see every day in comic books. Again Scott is seen wearing yet another Justice League shirt, this time being a flash shirt (ironic since Flashman makes his first appearance in this issue).

Rating: 10/10
Final Thoughts: Tom king has humanized Barda and Scott to the point that I care about them as people, I want their relationship to succeed, and I want them to have a happy ending. Gerads art adds a realism so fundamental it is hard to go back and see some of the more cartoony versions of these characters. This issue is so emotionally striking that it had me closer to tears than even this year’s Batman Annual issue, giving it my vote for the issue of the year. If you haven’t started reading Mister Miracle yet, I would recommend catching up just so you can read this issue. Actually, if you want to just read one Mister Miracle comic ever in your life, I’d recommend this issue.