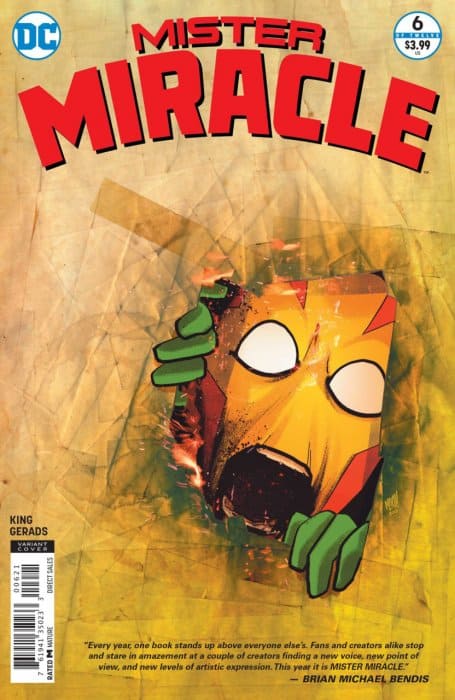 Mister Miracle must face his execution, but the only thing on Scott Free’s mind is…. Redecorating his condo? Find out more in Mister Miracle #6! 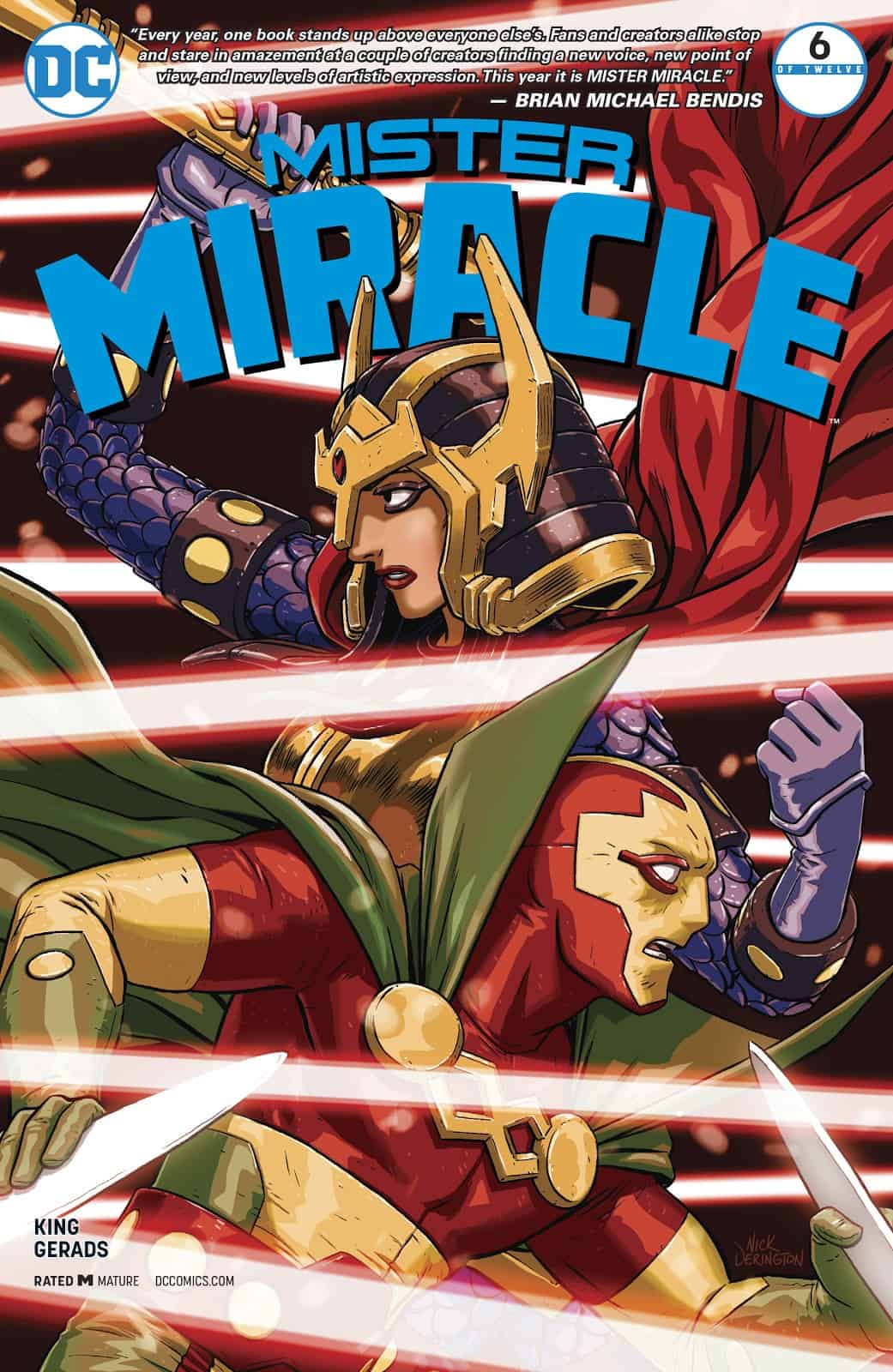 
What You Need to Know:
Scott Free is an incredible escape artist that can get out of any trap designated for him, but when he tries to escape life itself he starts to lose hope. Possibly controlled by the anti-life equation, Mister Miracle has tried his best to escape the feeling of paranoia and depression, and the only thing keeping Scott’s head above water is the love of his life, Big Barda. Barda and Scott share a condo on earth, Scott performs escape shows to support them, while Barda keeps up with what is going on with their home planet.

Scott and Barda have been recruited by Highfather to fight in the ongoing war between Apokolips and New Genesis. When the original Highfather dies suddenly, Orion, son of Darkseid but raised on New Genesis by Highfather takes his place and turns the tides of the war for New Genesis by killing Granny Goodness and much more of Darkseid’s army. Everything changes for Mister Miracle later on when Orion catches wind of Scott’s actions and confronts him about the possibility of being a spy for Darkseid. Scott can’t deny the possibility of the anti-life equation flowing through his veins, so Orion orders his execution.


What You’ll Find Out:
Scott and Barda have traveled back to New Genesis, but not to go through with Scott’s execution. Opening with scripts straight from Jack Kirby’s original Mister Miracle run as usual opening the story like a circus show, 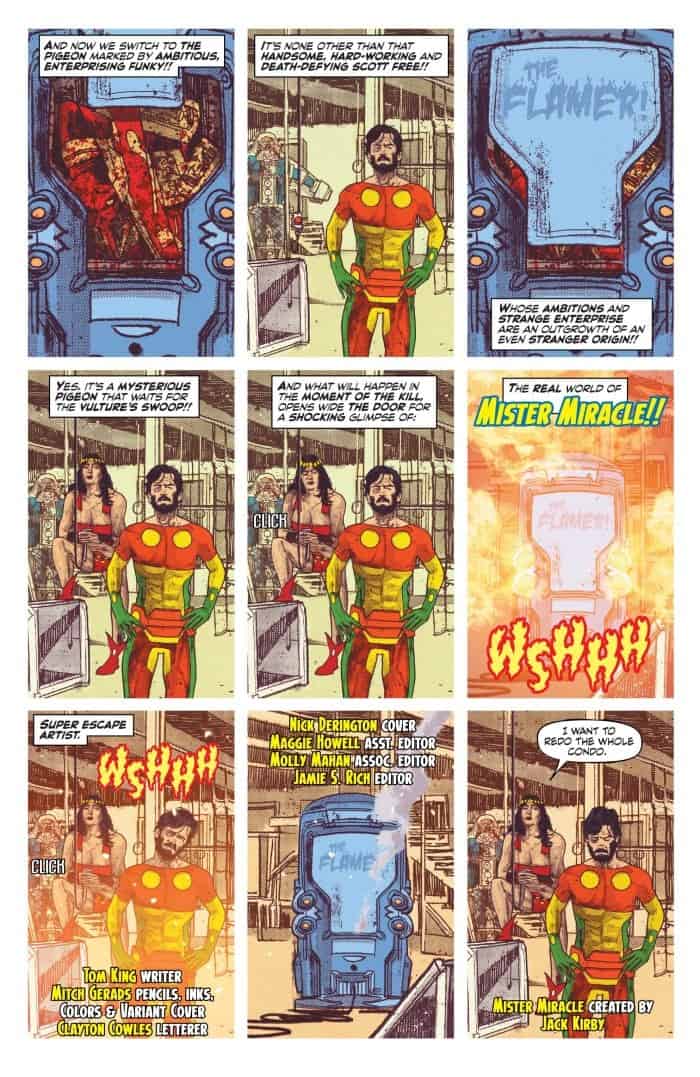 giving the reader the feeling that this is being acted out specifically for us behind the page. Scott and Barda start fighting their way through different levels of treacherous challenges as they travel through New Genesis to reach Orion. They knock out guards, 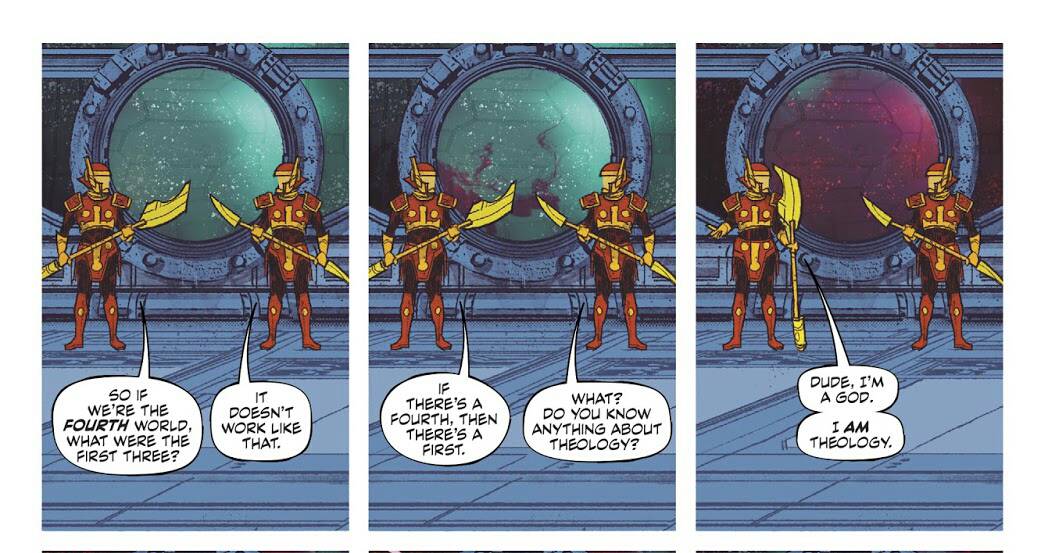 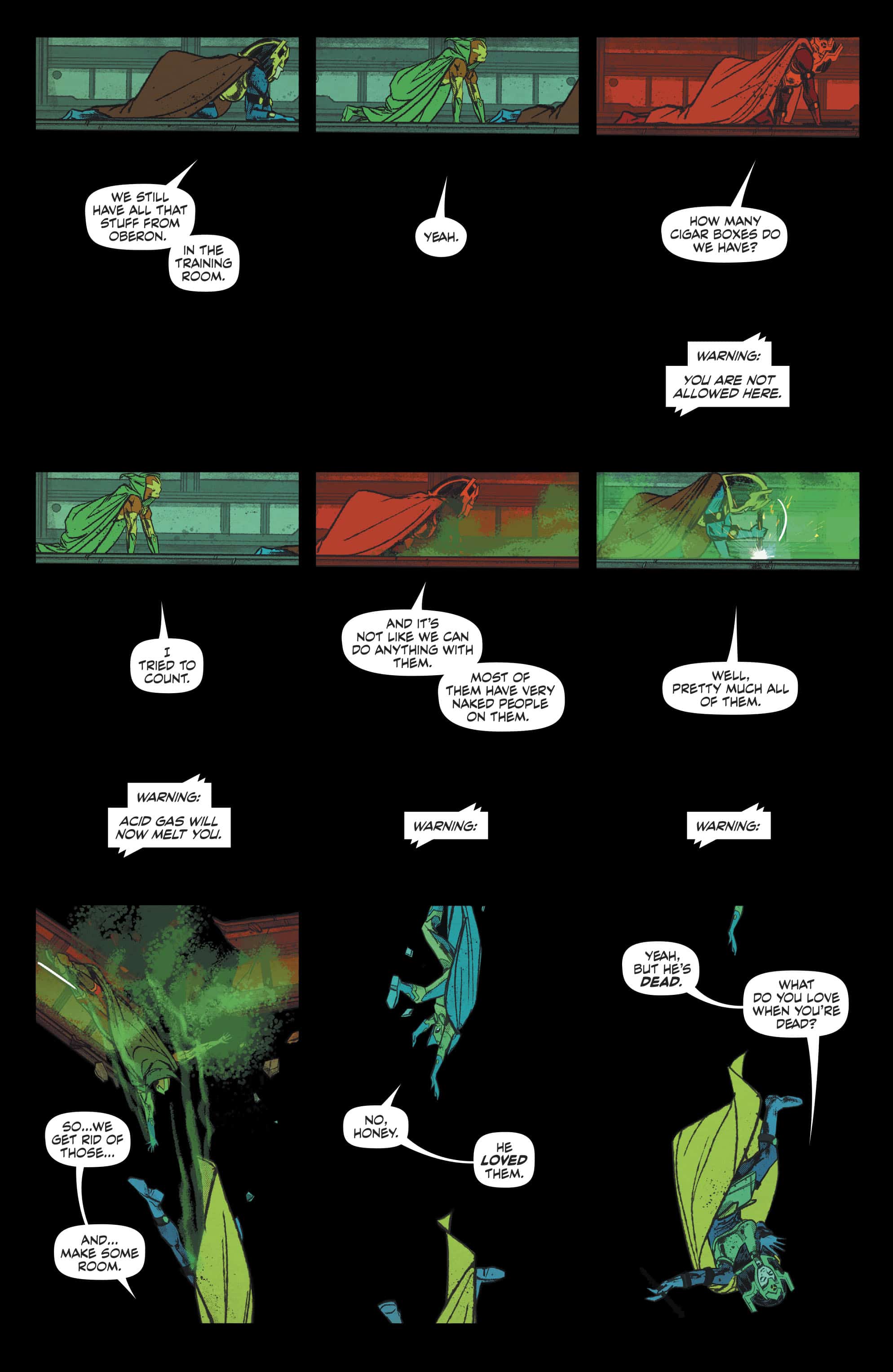 swim through giant sea monsters, acrobat around rooms full of lasers and pretty much anything else you’d expect to see in a cliche platformer video game.

Scott and Barda go through all these hardships carelessly as they talk about remodeling their condo back on earth. Barda has the idea of redoing their rooms to make space for another room. This conversation holds up almost all of the dialogue throughout the issue, never really straying away from the idea. Scott doesn’t really like the idea of change, as seen by his interjection to changing the condo. Barda argues that they need a new bedroom and that they can knock out walls, redo closets and get rid of their clutter. Before they reach the throne room that Orion is suspected to be in, Barda finally reveals her reasoning for the change. Excitedly Barda tells Scott that she’s pregnant. 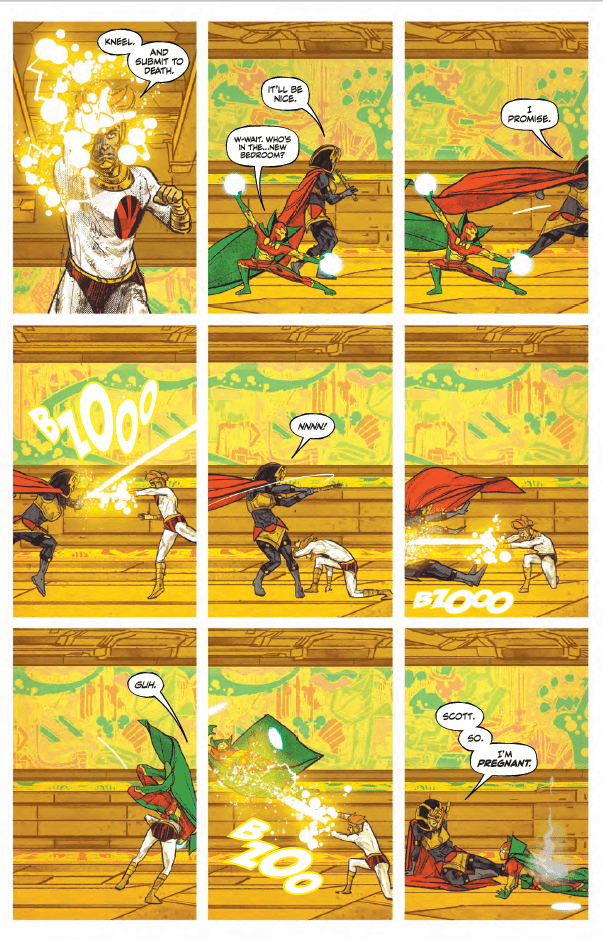 The pleasant reveal was met with a pleasant reaction when Scott hugs Barda and expresses his love for her before going towards his final trial. 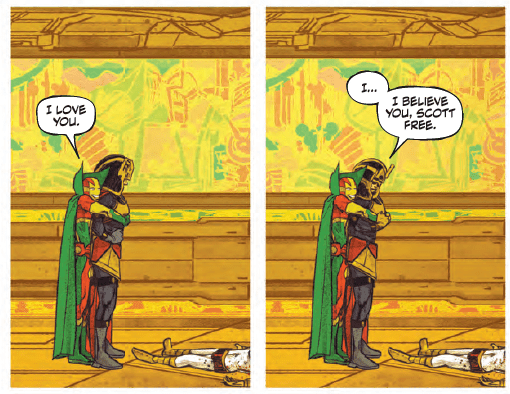 The final pages show Scott witnessing a breathless Orion bloody and beaten on the floor of the Throne room. The room is dark and quiet and Scott starts to freak out as he looks up and sees the face of God, Darkseid! Scott asks what he has done when Darkseid only replies “Darkseid does not do.” and boom tubes away from the scene. Barda walks in to witness the inexplicable horror in front of them, as Scott sits stunned telling her “I saw the face of God”. 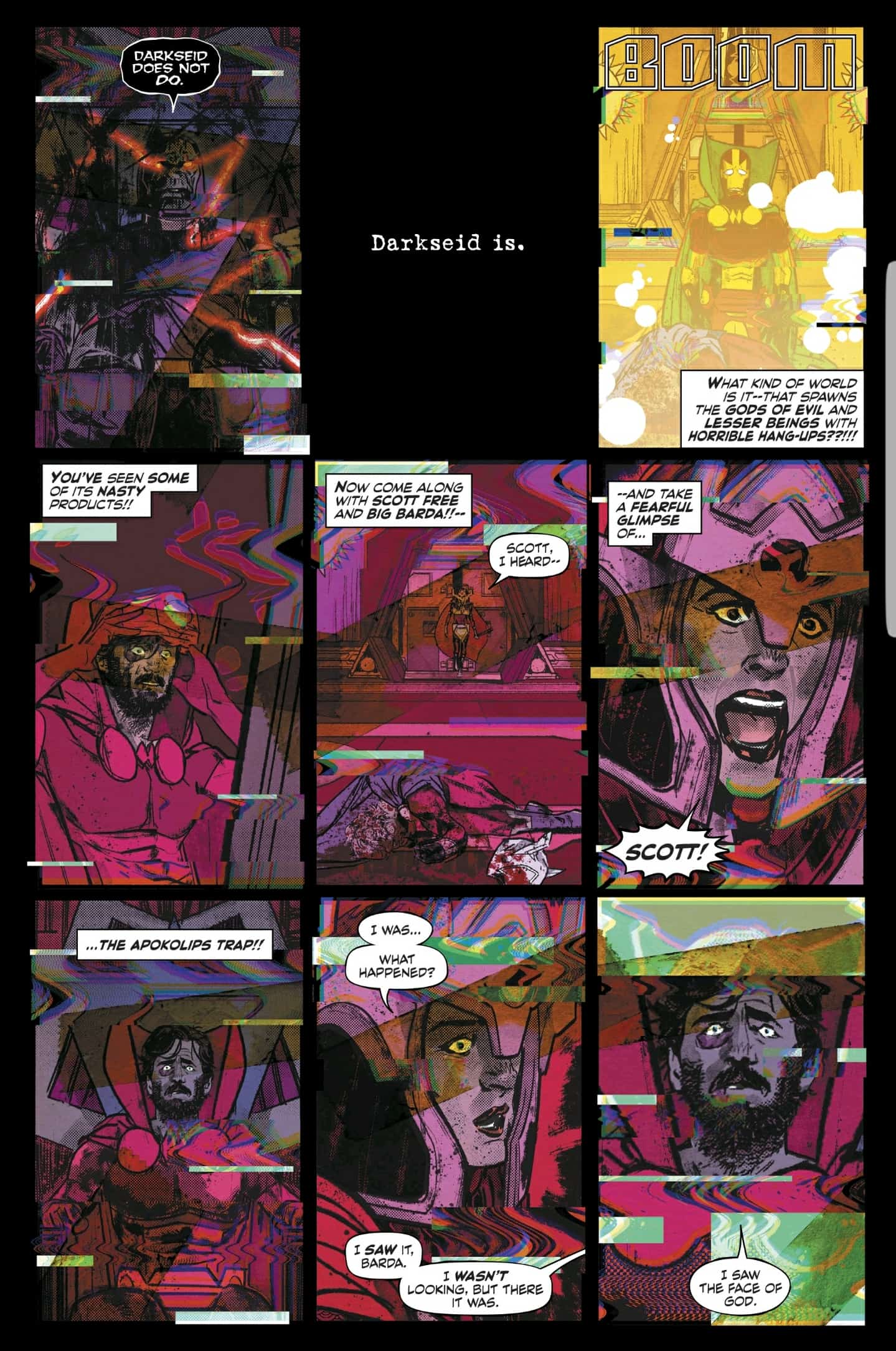 What Just Happened?
Once again Tom King has taken two obscure characters and made them feel like normal human beings just trying to get through their duties to their homeland so they can live peacefully in love. The humanization that Tom does in any of his work is his best writing feature and makes it exciting to see any character being written by him. I’m truly expecting to see Darkseid in a Hoodie and jeans when we finally get to the big showdown. Jokes aside, I have always glorified King for how human he makes any character he writes, and Mister Miracle 5 and 6 both show that skill beautifully. Each page seemed like a new theme that challenged Scott and Barda not only physically, but through their dialogue, almost like every level is a metaphor for the challenges Barda and Scott face as a couple. They’re two strong aliens from a different planet that was raised in hellfire and brimstone, just to have to fight for the man that was born in that Brimstone. They talk about changing their condo as if the conversation was between two normal people, the type of conversation you have in the car or during dinner, but they hold it while going through room after room of life ending challenges.  The lettering by Cowles adds to the flow of the dialogue, fitting it into the panels just right, so it feels natural and not like text bubbles on top of a picture.

Mitch’s art is exemplary as usual. Beautifully done ink gives every page of this series a sense of paranoia, giving the illusion that we are Scott Free and we are seeing the world the way he is. Every room that Scott and Barda enter has a completely new color scheme making them easily distinguishable, and adding to the feeling of different levels each time, only using the same scheme for guard rooms that look similar.  The only thing missing from this issue was Scott in a new hero tee shirt. Hopefully the next issue we will see that trend come back again.  The only better use of the 9-panel layout was in the last issue (nothing will beat Scott laying in a Jesus pose with nothing but his mask over his privates while Barda gets frisky) but in this issue it seems to make every section feel a little longer and thicker which is nice for an issue that doesn’t give too much info through dialogue.


Rating: 10/10.
Final Thoughts: Tom King and Mitch Gerads have left a permanent mark on Jack Kirby’s fourth world. Each issue makes Scott and Barda feel like people I could walk up to on the street and hold a conversation with. This issue adds to the humanization that King does best, as Cowles lettering ties the whole story together with an easy to read flow that doesn’t take away from the art. Mister Miracle #6 was a flawless issue that I recommend for any fans of the series, character, or just fans of great stories and artwork.