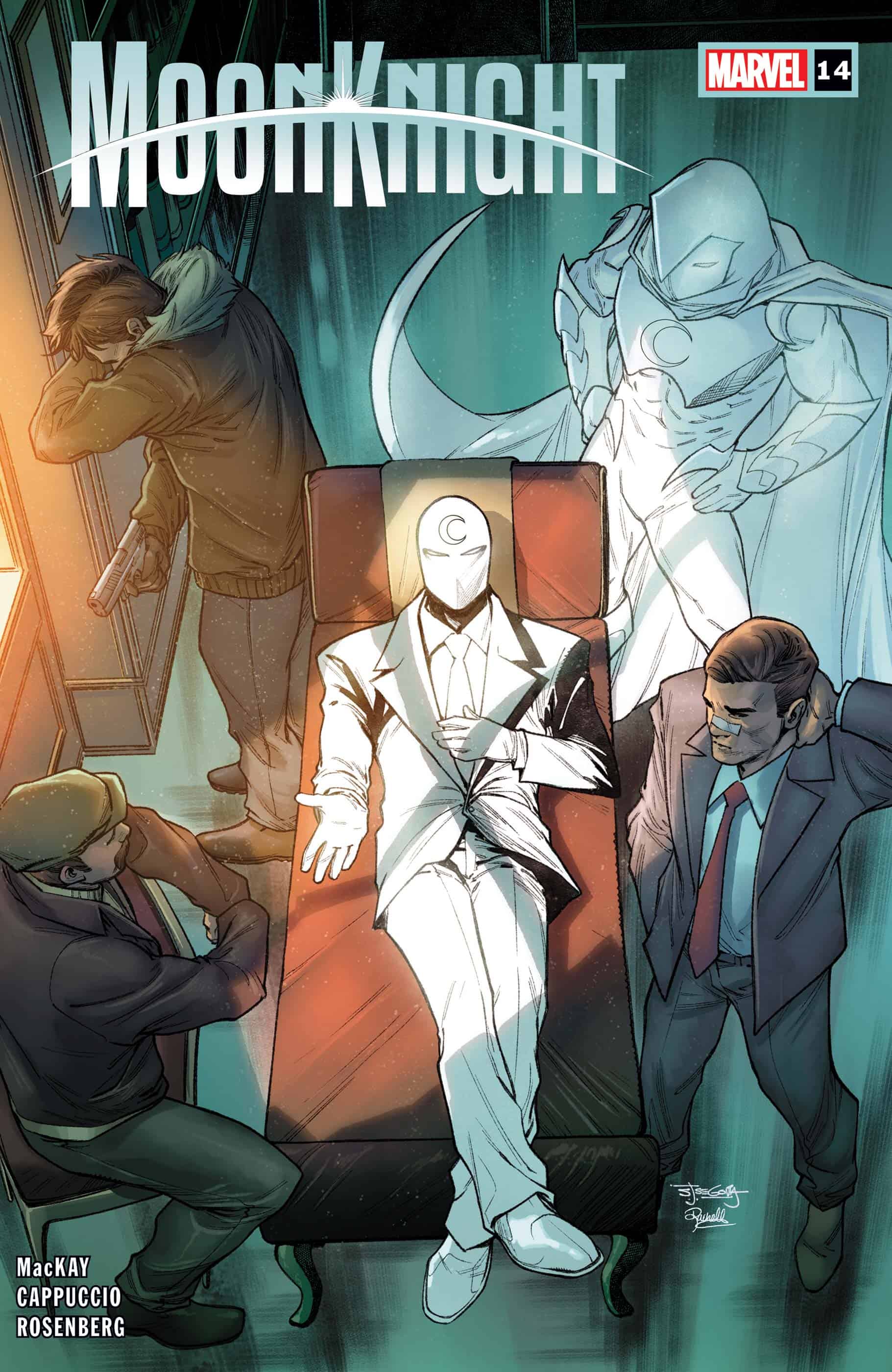 The scars of Zodiac's attack linger with the faithful of the Midnight Mission, but that doesn't stop Moon Knight from picking an entirely new fight. A new arc begins as Moon Knight goes to war with the vampires of the Structure, but he finds it a battle on two fronts—one on the midnight streets, and the other within his own mind!

In mainstream superhero comics, certain tropes and storylines come to define a character or book, to the point that they begin to feel like a blackhole that all runs get sucked into. For example, it seems almost impossible to completely separate magical ninjas from Daredevil or alcoholism from Tony Stark. It’s not wrong these expectations and concepts are tied to the character, as they usually arise during the character’s most celebrated runs. But it is nice for a creative team to stray far away from those ideas, at least for a time during a run. That way, when they do return to the trope or concept, it feels less repetitive.

The first thirteen issues of the current Moon Knight run feels exactly like an effort to step away from a focus on dissociative identity disorder and root the vigilante back in his street level and occult history. The run has not ignored or erased Spector’s condition but breaks from the tradition of using it as the frame or catalyst for the run, which has been the case for the last few modern runs of the character, along with the recent Disney+ series. Now that the series has taken that time to explore other aspects of a new Moon Knight status quo in a post-Avengers tie-in world, MacKay returns to the dissociative identity disorder elements of the Egyptian mythology.

Issue #14 – written by Jed MacKay, with art by Alessandro Cappuccio, colors from Rachelle Rosenberg, and lettering from Cory Petit – takes a hard pivot from the external conflict of vampire pyramid schemes to the interior with Spector’s various personalities. By switching from the external, the issue downplays the set-up from the previous issue, only giving minimal panel time to the fight with the villains. That choice leaves the issue feeling uneven, as the audience is trapped in Spector’s mind after the cliffhanger of new villains setting their sights on Moon Knight.

The only place where the issue suffers is in those moments as Moon Knight faces the two new villains, but no information is given about them. The fight ultimately rings hollow as MacKay’s script offers no stakes or context for these villains; beyond that, they’ve been hired by the vampires to fight Moon Knight. It’s possible that uneven feeling will be corrected with future issues, and this book may end up reading better in a trade, but in terms of a singular reading experience, it’s lacking in motivation or detail. MacKay’s choice to focus on the various personalities is an interesting decision overall, but the balance between the internal and the external could have been a little more evenly split.

The art comes out swinging at full force, opening the issue on a gorgeous full page that blends the best of Cappuccio’s linework with Rosenberg’s lush coloring. The coloring of the city behind Moon Knight leaping is a vibrant rainbow built around a refracting line cutting across the page. The issue carries that lighting effect and palette throughout, giving the Moon Knight costume a piercing glow against the cityscapes. The issue continues that coloring and linework as Moon Knight fight the new villains across rooftops and buildings, and the use of silhouettes paired with those striking colors established the visual language that makes this book feel unique across both the current street level and magical books at Marvel.

Along with setting the vigilante apart from the city, Cappuccio and Rosenberg do a great job of separating Marc, Jake, and Steven visually in the mindscape. From the way Cappuccio renders various facial expressions and locations to Rosenberg’s use of seedy neons in strip clubs vs. windows at the magic hour, the book always ensures its visual language makes the various personalities distinct. Those stylistic choices embed the various histories of each personality onto the page without having to divulge exposition throughout the dialogue or captions.

Moon Knight #14 is a great example of what a writer can achieve by playing the long game with established tropes and continuity. MacKay’s decision to split the issue’s focus between a villain battle and tensions with the personalities gives the script an uneven feeling but is made up for by powerful art and popping colors. If the future issues in the arc find their footing in the balance between internal and external, then this run of Moon Knight is shaping up to be one of the strongest yet.