Moon Knight #17: Their Own Personal Hell 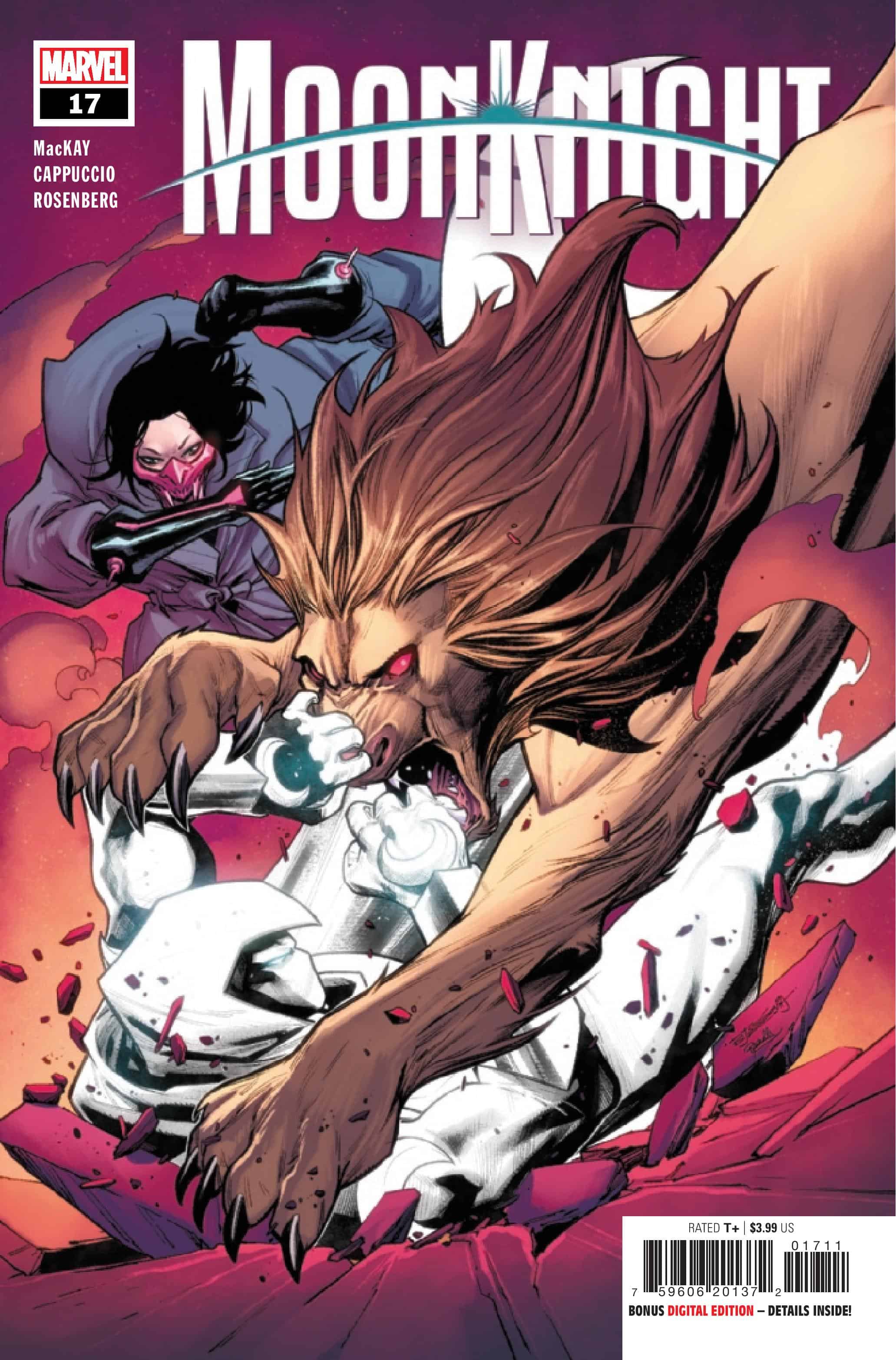 The Structure is poised to make their claim on New York City, but before Moon Knight and his allies can strike at them, the super-assassins Grand Mal and the Nemean must be dealt with. But how will Moon Knight handle two killers who beat him once already? And what shocking revelations will Marc Spector learn about the Fists of Khonshu?

Moon Knight #17 – written by Jed MacKay, with art from Alessandro Cappuccio, colors by Rachelle Rosenberg, and letters from VC’s Cory Petit – deals with the immediate fallout of Hunter Moon’s death at the hands of Grand Mal and the Nemean in the previous issue. The bulk of the issue is Moon Knight enacting his revenge against the duo, before turning his attention to Tutor and his vampire equivalent of a timeshare pitch to other vampiric delegates. The issue ends on a more subdued cliffhanger, with Mr. Knight and Tiagra dressed to the tens, ready to crash the sales pitch and throw another wrench into the vampire’s plans.

MacKay’s script is as thrilling as ever, breaking from the split perspective of the last issue to solely focus on Moon Knight as he executes his vengeance against the hired assassins. MacKay makes clear the reason for Moon Knight’s previous failure, explaining that the vigilante saw the two as supervillains and attempted to fight them on that level, rather than treating them like the mercenaries they are.

By switching his approach, Moon Knight can easily dispatch them with the help of the Midnight Mission building, which MacKay uses as an excellent callback to one of the seemingly standalone early issues of the run. It’s an effective way to showcase the strength of this run, pulling in the various seeded elements to create a tight, cohesive plot that is both unexpected but narratively satisfying. The scripting also makes the case to go back and reread previous issues, to refresh other details that may reappear in future issues.

The sequence set in the Midnight Mission is an inspired choice, as it allows for both Cappuccio and Rosenberg to alter their styles and palettes, leaning into a feral and harsher aesthetic. The sequence plays like a horror-fueled nightmare, in which the assassins are wrapped in chains and dragged through two separate but equally twisted landscapes in the sentient building. For the Grand Mal, the mission shifts into a black (or red, thanks to the coloring) hole lined with skeletons and distorted design work, like a macabre spin on stained glass decor. The Nemean gets his own hell in the form of ancient ruins, filled with beetles clawing at the assassin. It’s an interesting reflection of both Moon Knight’s Egyptian connections, but also Nemean’s roots in Greek mythology.

In both instances, Cappuccio splits the experiences, first showing them as two separate sequences, but bringing them together by the end of the larger plot. The panel composition of the two is striking, using a sharp diagonal to divide the page, which contrasts against the more conventional panels used on the previous pages. That use of sharp panels, harsh linework, and abstract backgrounds takes the book from the concrete world established throughout the series and places it into a looser, more liminal space that distorts the reality of the page.

Rosenberg’s colors work to match that distortion, breaking out a unique crimson for the sequence, adding to the notion of the space as a hellscape. The red also plays off the pink of Grand Mal’s mask to illustrate a sense of scale to the vast littering of skeletons that begin to drag her down. On the page, the skeletons shift from the red of the looming sphere at the top of the page to a pink/purple that begins to match Mal’s mask, linking it to the remains, implying they’re her fate.

Rosenberg then shifts and weaponizes the established colors of the book for Nemean’s time on the mission, using the cooler blue/green that has become synonymous with the book to bathe the mercenary and the ruins he is trapped in. The lighting evokes an all-seeing moon and its light guides the falling ruins, literally weaponizing the light source against the Nemean. That blue also allows the swarming beetle to later stand out, indicating the scope of the insects as they swarm the man. It’s a contrast that’s carried to the split page mentioned above, with the red/oranges of the hellscape and the cool blue/whites of the ruins showcasing the two experiences, and signaling Moon Knight’s own variety of methods to dispatch his foes.

That split echoes a few pages later in both the art and colors as Hunter Moon is revealed to be alive once again, as it’s revealed that the Fists of Khonshu “don’t die.” Cappuccio presents the return as a single-page splash, with his linework and Rosenberg’s colors creating an implicit distinction. Moon Knight is cast in the blue/white light of the moon, while Hunter’s Moon takes a golden hue that reflects both the adjournments of his suit, and the spectral light source from Mal’s sequence. Instead of the bloody crimson, it has the golden light escaping like sunlight past an eclipse. It’s a powerful composition on the page and builds the mythic quality of these two avatars, separating them from just street-level vigilantes.

Moon Knight #17 continues the excellence of its entire creative team, allowing Cappuccio’s pencils and Rosenberg’s colors to shine. The art and coloring play with the expectations and established visual style of the book to present terrifying applications of the two crafts while establishing the versatility of established continuity. MacKay’s script echoes previous issues and cultivates seeded elements to build tension and craft an excellent sequence of evocative terror. It also subtly affirms some bits of the Moon Knight/Khonshu lore through tight, lean storytelling, making for an enthralling read on levels.

Moon Knight #17: Their Own Personal Hell