Moon Knight #8 In touch with the ground, I’m on the hunt I’m after you 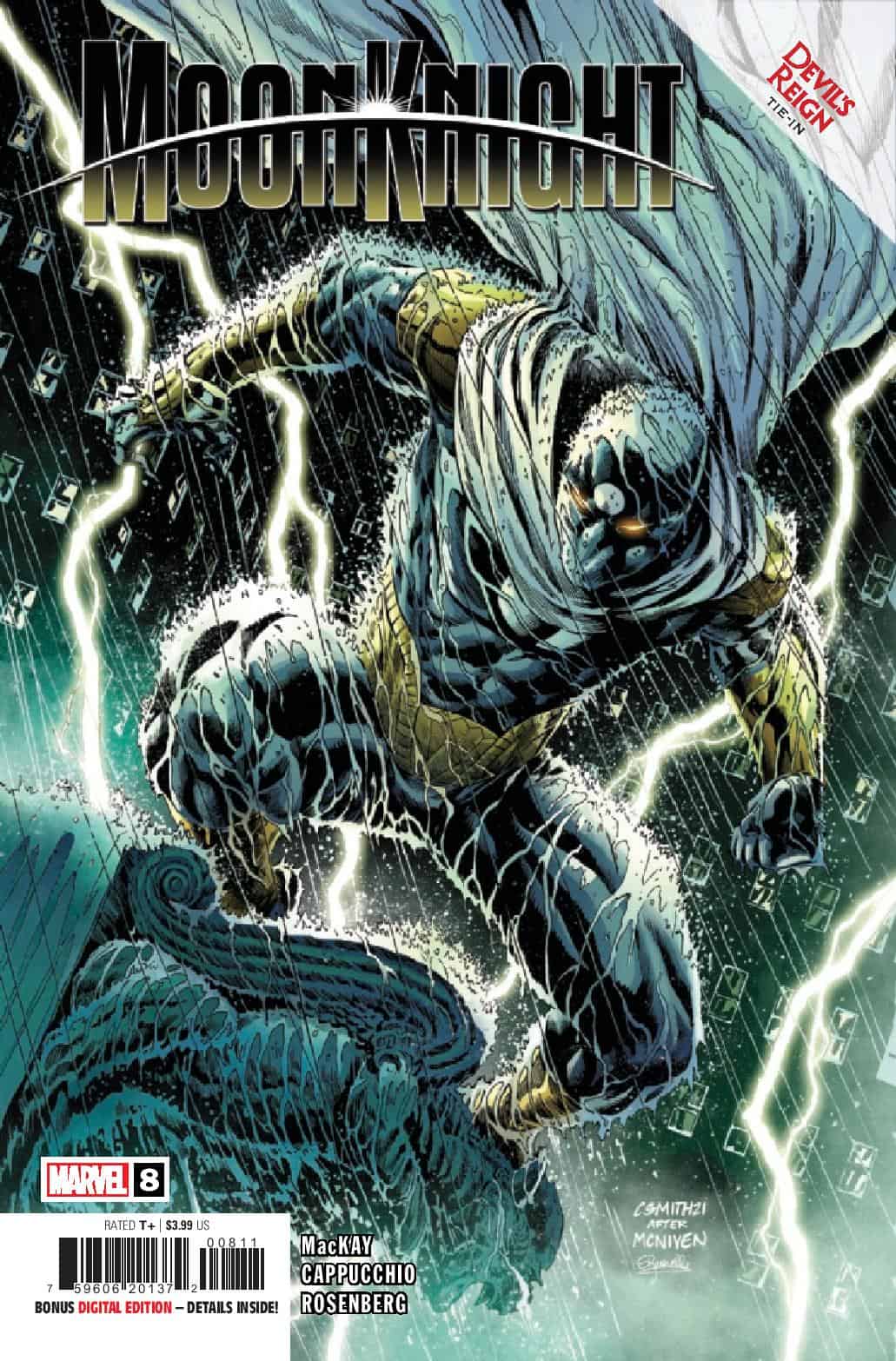 "Welcome to the Midnight Mission. My name is Doctor Moon. How can I help?" Moon Knight may be indisposed in the wake of the Devil’s Reign, but the mission continues. In his absence, an erstwhile ally takes up the fight, but will the mystery of Stained-Glass Scarlet prove to be too much for Hunter's Moon, the Fist of Khonshu?

Moon Knight #8, and we’re knee deep in the current Marvel event, Devil’s Reign, that’s revolving around Daredevil, Elektra, and pretty much anyone else who you could consider a street level vigilante in the Marvel universe. While this is billed a tie-in, it’s a tie-in in name and cover blurb only. This issue revolves around Hunter’s Moon, the new villain that MacKay and Cappuccio created at the beginning of their run. Pitting Hunter against longtime Moon Knight adversary Stained Glass Scarlet, who is no longer what she used to be, and it’s definitely not something I expected from this character. Where Jed takes this new development will answer the question on whether everything pays off or not.

Jed’s taken Moon Knight, who’s spent the better part of nearly 2 decades where the main focus was on exploring his MPD, back to his roots by adding elements of horror into it, with a dash of MacKay’s humor that he’s so well for. Don’t get it twisted, there’s still lots of noir Moon Knight stuff that we’ve come to love, but this back to basics has been a real breath of fresh air for the character, and his cast. Speaking of his cast, adding Tigra, who has her own ties to the darker side of Marvel, but also  Dr. Badr, Reese, and Dr. Sterman has given Marc a new lease on life. Marvel’s really putting a lot of faith into MacKay, with his Avengers mecha minis, the two volumes of Black Cat, and killing off Dr. Strange, and it feels like he’s just warming up.

Alessandro Cappuccio’s back on art duties after his break last issue and he’s killing it. Teaming up with Rachelle Rosenberg, they’ve created a dark world for Moon Knight that he thrives in, but doesn’t make it seem like it’s just a retread of Daredevil or Batman, but remarkably it’s its own thing. Yeah, he’s in New York, where literally 99.99999999999999% of all of Marvel’s heroes are located, but you don’t care. The Midnight Mission is the place you want to be. Marvel struck gold with this team, as MacKay can play up to Cappuccio’s strengths, and let him go wild. I hope to see this team do big things on one of Marvel’s more complex characters.

I do have one complaint, and it’s a complaint I’ve had with almost every other run on Moon Knight is exploring his Jewish heritage. Moon Knight’s one of the few openly Jewish characters in the Marvel universe, and it’s an angle that is full of potential, dealing with two different religious ideologies between Judaism and his role as Khonshu’s fist and avatar to the rest of the world. Sure, Marc’s not a religious zealot, like Hunter Moon has been portrayed, but there’s definitely room to explore.

Giving Hunter Moon an issue to develop while Moon Knight’s occupied with one of the monthly Marvel events, was a nice treat. Giving MacKay the chance to scrape below what we’ve seen, and make him a more well rounded and complex character. It also adds potential for future conflict with the two fists of Khonshu, and the difference in how they serve him as his avatars on the earthly realm.

Moon Knight #8 In touch with the ground, I’m on the hunt I’m after you