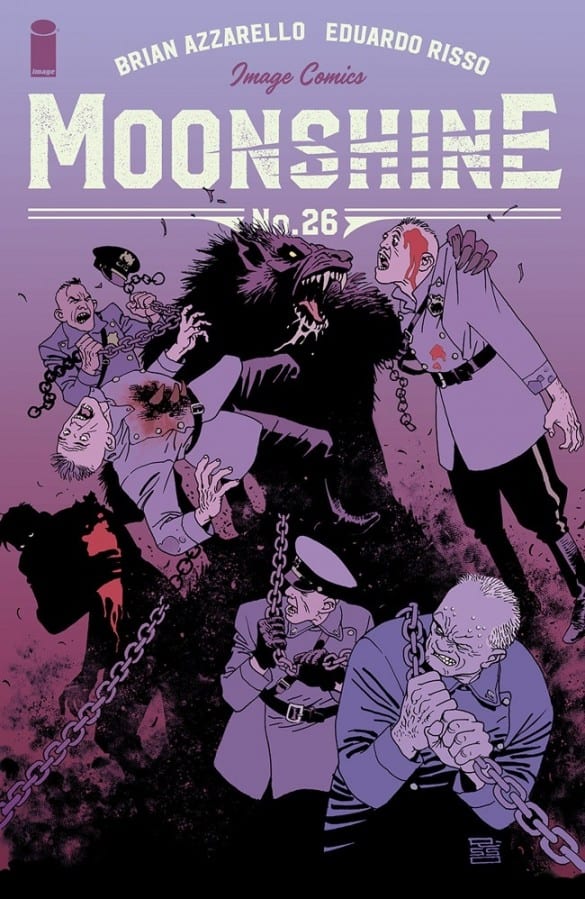 The Holts want to take over the booze operation in New York City. Mr. Holt did not take too kindly from being taken prisoner from his mountain town and he continues to exact revenge on the big city mob. As Tempest continues to run her own game to exact revenge. Lou Prilo continues to be a drunk screw up, that lets the beast out in the open in. The prohibition era, gangster, crime, werewolf story starts to wind to its conclusion in Moonshine #26.

I have almost fallen off of Moonshine several times. At one point in time I thought it had actually already ended. Obviously it did not, but apparently now the series is officially concluding with issue #28. I cannot exactly say why I keep coming back to Moonshine. I have lost the “thread” to the story and honestly, do not find any connection to it. But, I am a sucker for a werewolf story and I have been following along this long so might as well finish it out.

Anyway, Moonshine #26 is a pretty solid issue all and all. Azzarello lets the beast out literally as werewolf Lou Prilo runs amok in New York City, basically out in the open. Leading the detective on his tale to his correct conclusion that yes some “animal” is responsible for the murders here and in Cleveland.  Azzarello also starts to put all the big players into position for the series ending as well. As the Holt family, the mob, the police, Tempest and everyone else starts to implement their plans.

I think a little recap page at the beginning would help this series extremely well. Just like a few sentences such as, “Hey, here is what’s up.” I have read every issue and still have trouble telling exactly what is going on or why some things are happening. The main storyline thread of this series does seem to be completely lost. I mean we have some interesting stories thrown in, but nothing to majorly grab a hold of.

Azzarello though does do a good job of kind of bringing everything together in Moonshine #26. He starts condensing the story a bit and starts to focus in on bringing all of these different “players” into the same place for what seems to be the final confrontation. So, in that aspect at least the story is pretty straightforward. But, there is no character or anything for the reader to grab a hold of here. 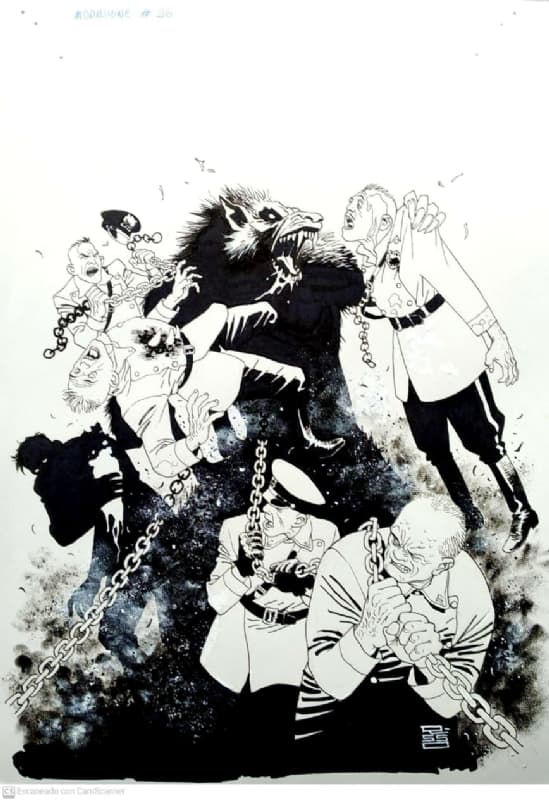 The real standout and the things that continues to bring me back is that sweet, sweet, Eduardo Risso artwork. I mean I could look at Risso drawing prohibition era gangster’s all day long and not get tired of it. He captures this era superbly well. The characters have that look and feel of the time setting, they ooze the vibe of the era, clothing and style are pitch perfect by Risso. From architecture to vehicle design this era is detailed perfectly. It set’s you firmly in this time period.

Plus, that coloring work by Risso and assist by Cristian Rossi continues to be some of the best on the shelves. Wonderful use of light and shadows with different background hues to delightful story affect. Risso plays with the coloring and lighting of the series so superbly well. It is a lovely visual display. I love the way he keeps he uses the darkness and light to tell the story.

We get a lot of werewolf action through this issue. The first part of Moonshine #26 felt like that ending scene in An American Werewolf in London with Jack rampaging through downtown London. If you know one thing about me is that I am very picky about my werewolf designs and Risso does a great one. Nice creature design, I like that he has that human/monster feel to it that I believe is the sweet spot for werewolf designs. Ton’s of first rate werewolf action in this issue, which made it a fun read for me personally.

Moonshine #26 is a tricky one for me. The story starts to be compiled a bit more into what seems to be a big showdown. I still have trouble with finding the main thread or what Azzarello wants this story to be? But, the artwork is fantastic and there are some fantastic werewolf action in the issue, so that kept me distracted from the disjointed story mostly.