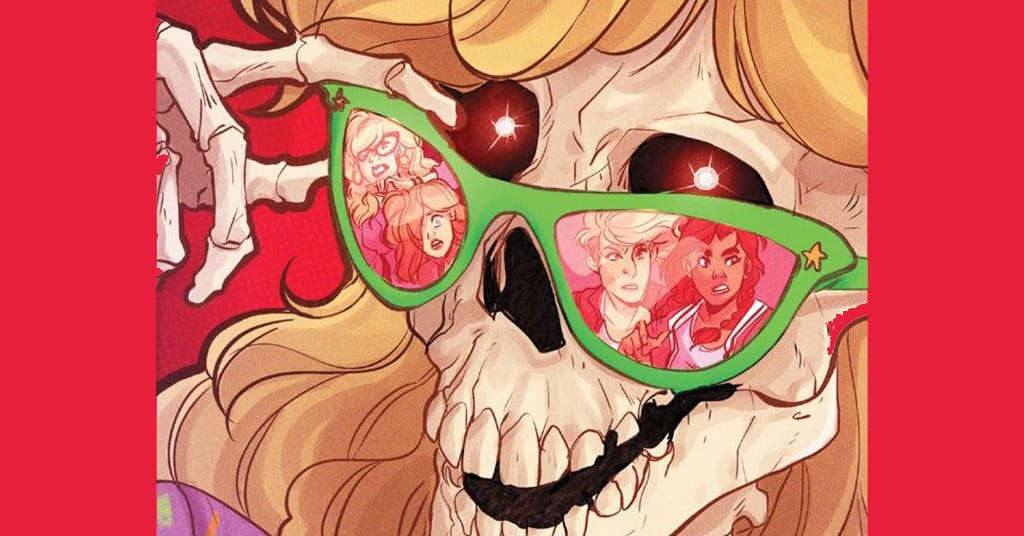 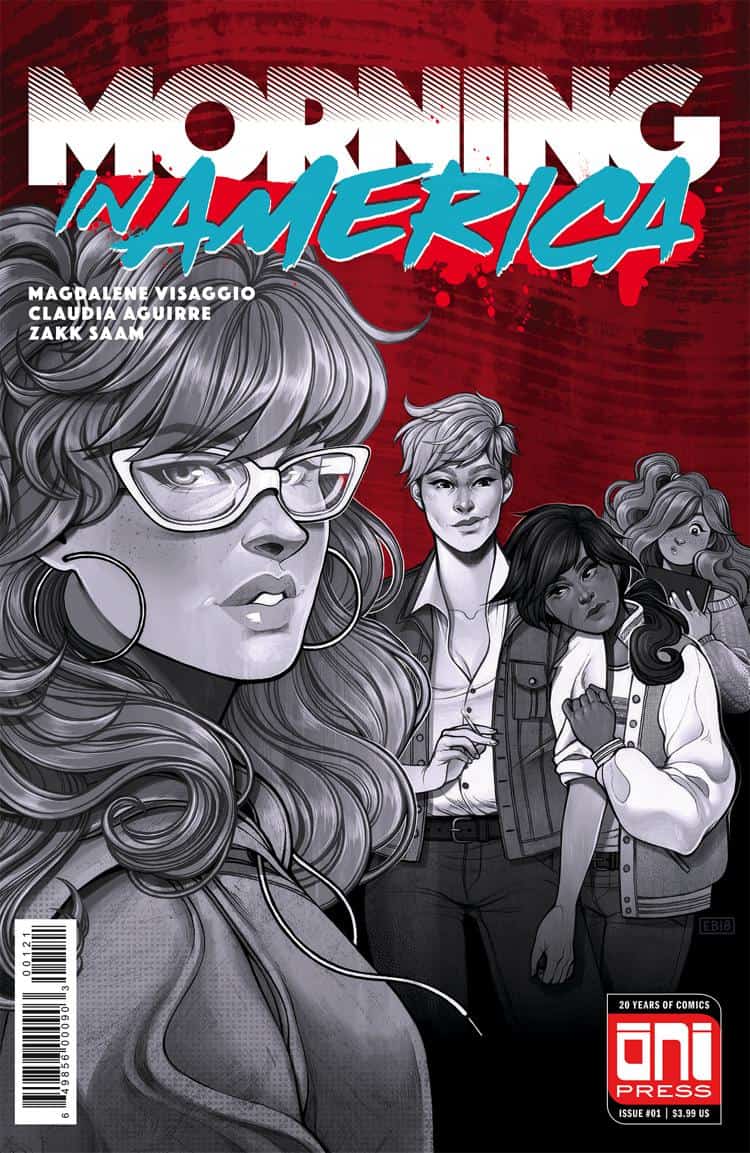 Tucker, Ohio, 1983... Welcome to a slowly-dying industrial town, where four outsiders - Ellen, Nancy, Veronica, and Ashley - routinely give the middle finger to "the system" as The Sick Sisters. All of them have minor rap sheets and a delinquency streak (nothing major, vandalism, shoplifting, truancy, and so on). Mainstream society means little to them.

Nancy, a Latina with an unemployed dad and an exasperated mom trying to carry the load, arrives at high school one day to overhear that two students have disappeared, and although the local police are chalking them up as runaways, the school is nonetheless making moves to add extra security. 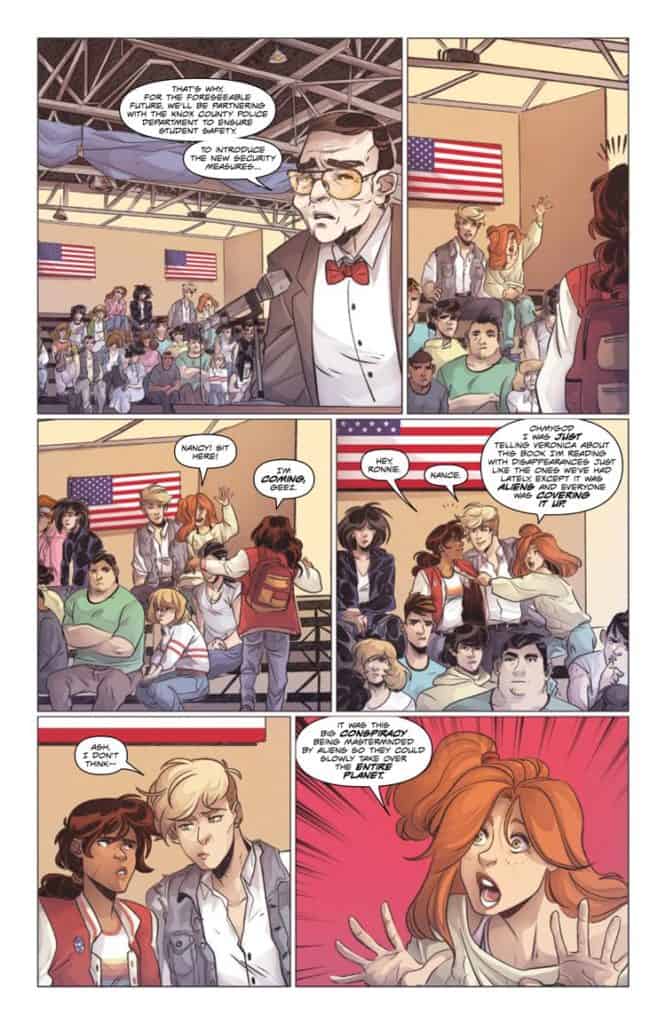 Nancy isn't quite sure what to think, but when she randomly further discovers that the missing student total is actually five. Her feelings that something is far more deeply amiss seem to be confirmed when a student she's dealing cigarettes to says something far worse than authorities have let on is afoot, claiming that monsters are kidnapping kids. Nancy decides only the Sick Sisters can do something about it!

If the above synopsis sounds like a watered-down plot from a YA novel, you’re not wrong. Despite its name being evocative of a more political theme (“Morning in America” was Reagan’s ’84 campaign slogan), the truth is that this comic reads like a Disney Channel version of Brian K. Vaughan and Cliff Chiang’s Paper Girls with swears.

Younger readers might find this sort of thing engaging, but anyone over the age of 14 will probably see right through to its influences. There are hints at broader themes, such as the town factory closing down and devastating the local economy, or Nancy and her girlfriend Veronica’s then-taboo romantic relationship, or the feeling of being an outsider to larger society. But author Magdelene Visaggio can’t even be said to be even scratching the surface of these plot points; they’re just sort of there as part of the scenery.

And what boring scenery it is. The writing execution is amateurish at best; all of the characters are stock caricatures. The Sick Sisters themselves (that was the best name Visaggio could come up with?) are one-note at best: Ellen is the bitchy one! Nancy is the stalwart POV! Veronica is the butch one! Ashley is the cute one! Yet at no time are readers ever shown any particular reason why these characters, who have nothing in common except their outsider statuses, would be hanging out together in such an apparently close-knit (or so we’re told) clique. We’re told they’re these badass outsiders, but if tagging an alley and dealing cigarettes is the most “badass” thing Visaggio can muster, she isn’t trying very hard to sell readers on that notion. It actually doesn’t even appear that the Sick Sisters even like one another that much, as in the opening scene, Ellen doesn’t hesitate to angrily refer to Veronica as a queer. So, as one of the ostensible protagonists, why are we supposed to be rooting for her again? Later scenes equally paint her as a detestable human being, one most readers would happily let get kidnapped by monsters.

The town itself could be substituted for any other locale from an ’80s John Hughes film (only without the magnetic leads), and the plot is as dull as it is unimaginative. The art by Claudia Aguirre is reminiscent of Oni alum Chyna Cluggston-Major, a sort of halfway almost-manga style that doesn’t focus much on details but rather on body language and facial expressions. I’ll admit that for this story, it fits. The coloring, though flat, isn’t technically bad but doesn’t exactly pop off the page either.

Interestingly, though, for all of its YA overtures, Morning in America tries to have it both ways by throwing some R-rated language into the mix. It’s a bizarre mix of watered-down, been-there-done-that storytelling that clearly pines for a younger audience, yet also craves authenticity by trying to appeal to ’80s nostalgia Stranger Things-style. It doesn’t succeed at either, leaving the reader wondering as to why they should care enough to check out any future installments.

Morning in America tries to capture the spirit of superior works such as Paper Girls or Stranger Things, and in the process winds up having no identity of its own. By that turn, it really doesn't justify its own existence. Why read the watered down knock-off version when you could be consuming the superior original?