Mr. Higgins Comes Home: Amid the Smoke Shall Gleam the Flame

Preparations begin at Castle Golga for the annual festival of the undead, as a pair of fearless vampire killers question a man hidden away in a monastery on the Baltic Sea. The mysterious Mr. Higgins wants nothing more than to avoid the scene of his wife's death, and the truth about what happened to him in that castle. However, these heroic men sworn to rid the world of the vampire scourge inspire Higgins to venture out and to end the only suffering he really cares about--his own.

Every now and then, if you’re lucky, a book comes along that absolutely blows your mind and makes you appreciate the comics medium in an entirely new way. The kind of book that makes you want to go back and read it over and over again, then tell everyone you can think of about it so they can do the same.

For me, this book was Mr. Higgins Comes Home. 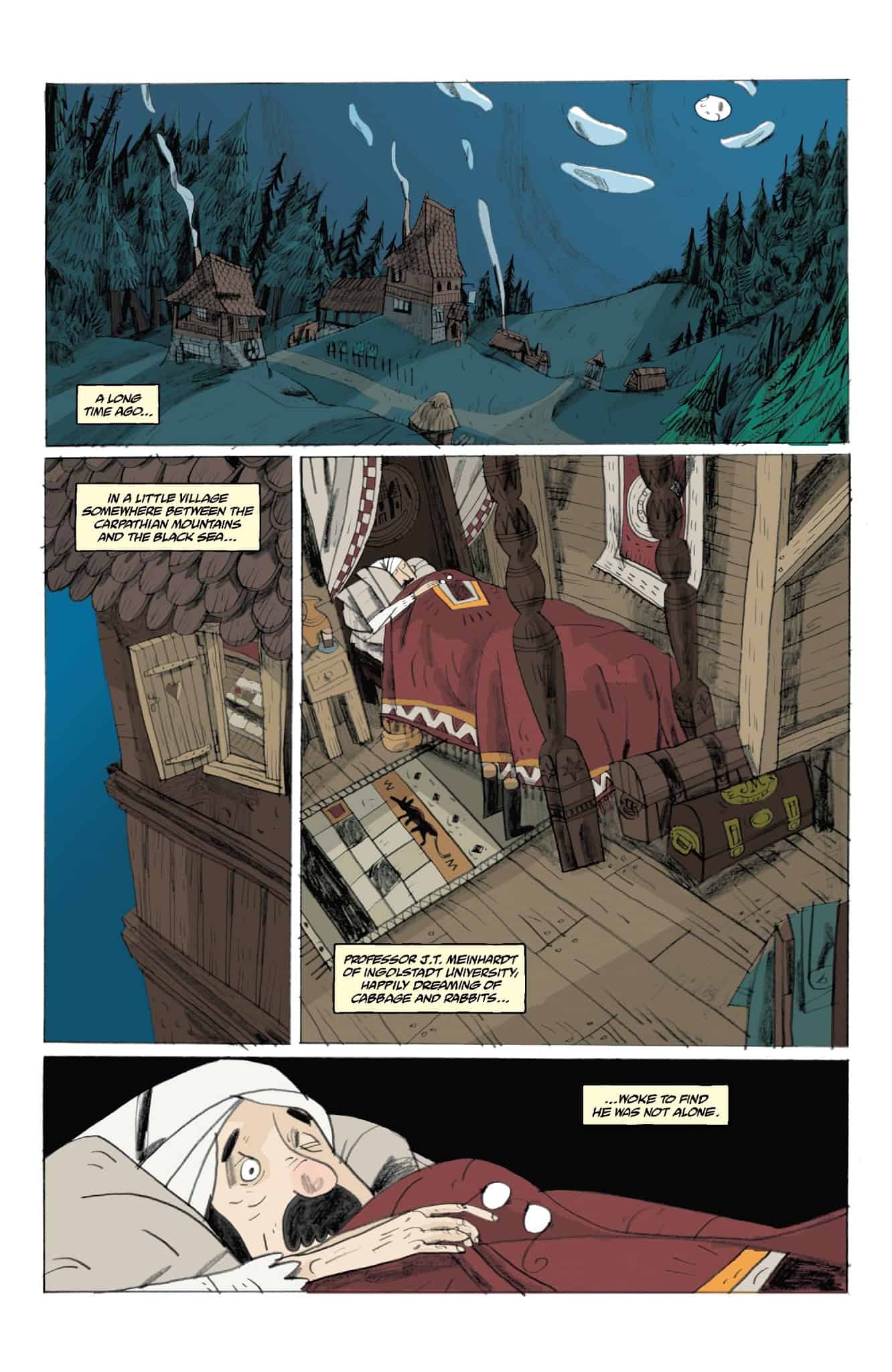 Described as a sendup to classic vampire stories, this story taps into the same vein as Bram Stoker’s Dracula with a tale about the dark recesses of evil and those who are hellbent on hunting it down, but with a twist. Featuring Professor J.T. Meinhardt of Ingolstadt University and his assistant Mr. Knox, Mr. Higgins Comes Home follows the duo on their dangerous mission to root out the foul creatures known as vampires and put an end to them. This task leads them to none other than Mr. Higgins, who proves to be much more than just a depressed old man by the story’s end.

With a narrative from Mike Mignola, it’s difficult to not get incredibly excited. Mr. Higgins Comes Home is not set within any established universe, like that of Mignola’s other creations Hellboy and Baltimore. Instead, it is an entirely original tale that quickly establishes a rich new world ripe with potential for storytelling. It’s grounded in horror aspects, but it is so much more than that too. It’s a dark comedy of epic proportions that feels uniquely grounded, capturing an aesthetic or mood that you simply can’t find anywhere else.

The visuals from Warwick Johnson-Cadwell are where this book finds its distinction in the comics medium. This is an artistic approach I would have never suspected for this type of story, but it works remarkably well in capturing your attention and holding onto it page after page. The stylistic characterizations lend themselves towards the humorous aspects, but it also brings out a twisted look at the presence of evil. It’s the type of artwork that absorbs your attention, even in passing, and although it might take some getting used to, you won’t want to put it down. I know I couldn’t. 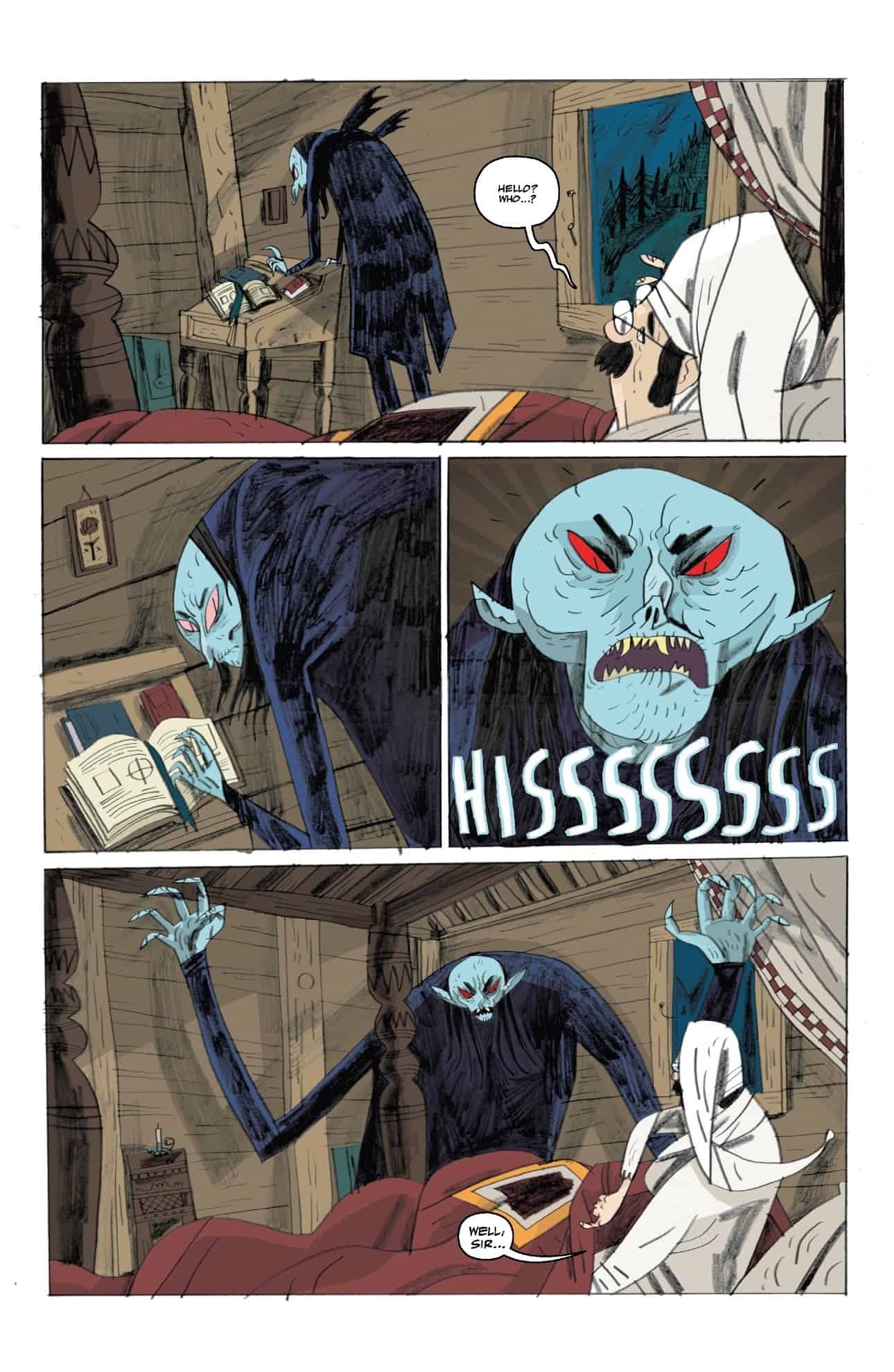 With a near-brilliant story from Mike Mignola and stunning, yet uniquely original art from Warwick Johnson-Cadwell, Mr. Higgins Comes Home has all the right pieces for a truly great story. And it puts them together perfectly. This is what I want when I sit down to read a comic. It’s full of provoking characters, dynamic world-building and narrative twists and turns. In classic Mignola fashion, its also influenced by some interesting real world events such as Walpurgisnacht, also known as Walpurgis Night. In Germany, this is associated with a night when witches meet and hold revels with the Devil. These Satanic components blend into the classic vampire homages to punctuate both the story’s originality and insight into the history of horror, both fiction and nonfiction.

While I will avoid going too deeply into spoilers for those that want to seek the story out for themselves, the prominence of a lone werewolf and their rather destitute life is a critical aspect of Mr. Higgins Comes Home that many will find intriguing at the least. Set against the affluent backdrop of the vampires, we ultimately find a story about a sad and lonely werewolf. The meaning of all this, as with most stories of this caliber, isn’t strictly black and white but it does leave you with a sinking sense of frailty in the face of power.

Overall, Mike Mignola and Warwick Johnson-Cadwell with Clem Robbins on letters have created what I believe is a masterful take on the horror genre in comics. It’s simply powerful storytelling that will truly make an outstanding addition to anyone’s collection. Go out and find Mr. Higgins Comes Home and buy it.

You won’t be disappointed.

Mike Mignola and Warwick Johnson-Cadwell with Clem Robbins on letters have crafted a masterful take on the horror genre in comics with Mr. Higgins Comes Home. It's powerful storytelling that will truly make an outstanding addition to anyone's collection.

Mr. Higgins Comes Home: Amid the Smoke Shall Gleam the Flame