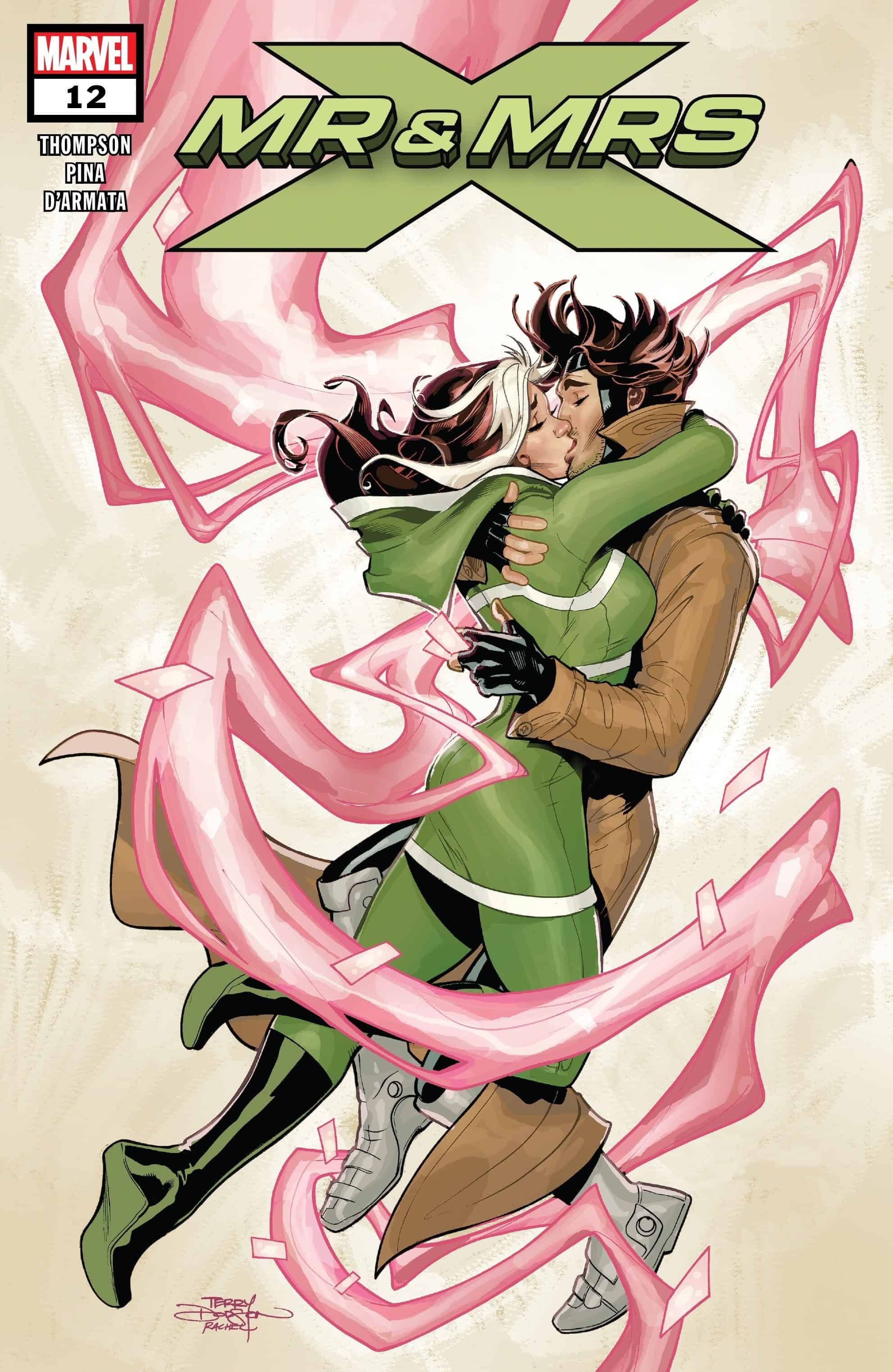 As Candra makes Gambit choose between his wife and his ex wife, Remy defies all expectations and devises a cunning plan of escape. And with Candra dealt with it falls to Jean-Luc to hold them to a reunion with Tante Mattie. And after some baby talk the two head home to let the dust settle, before deciding what to do about searching for the X-Men. 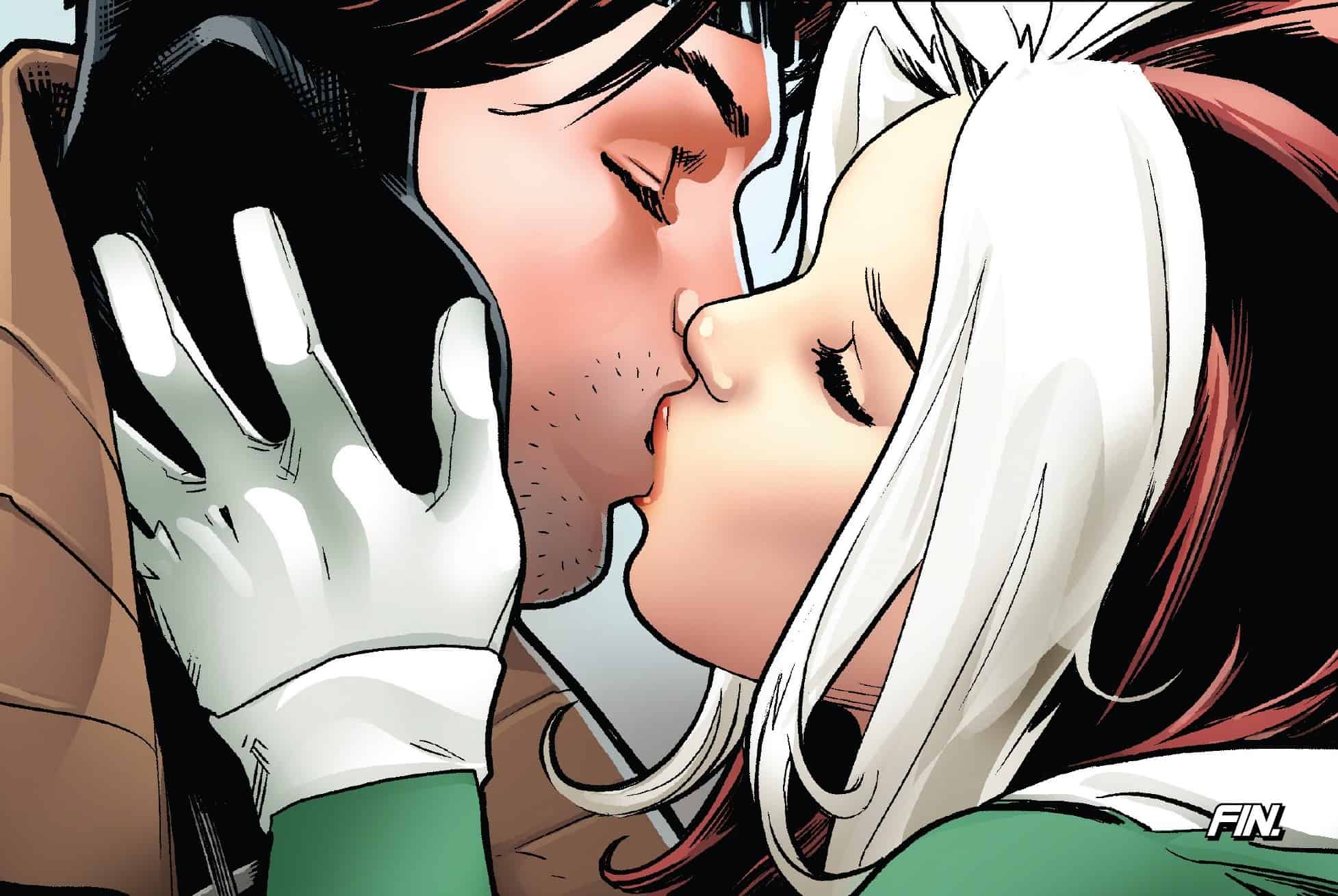 Art: Terry Dodson & Rachel Dodson again give us a stunning image of our power couple and have them in the romantic clinch that shows just how fervently these two love and need each other. And with Javier Pina taking over for the final issue it has addressed the criticism some have had about the facial features, and it has made Rogue appear a little more individual from the other women shown. And his style otherwise isn’t too dissimilar to Oscars which makes the whole arc seamless and keeps the flavor we have come to know from this series. As much as some criticism has been leveled at Oscar’s depiction of the facial features of his female characters, I had grown to love the style in this series. But I can see the change has made a big difference, as she is now showing more assertiveness and control of her fear and I can definitely see a change in her appearance, which informs the personality growth entirely. 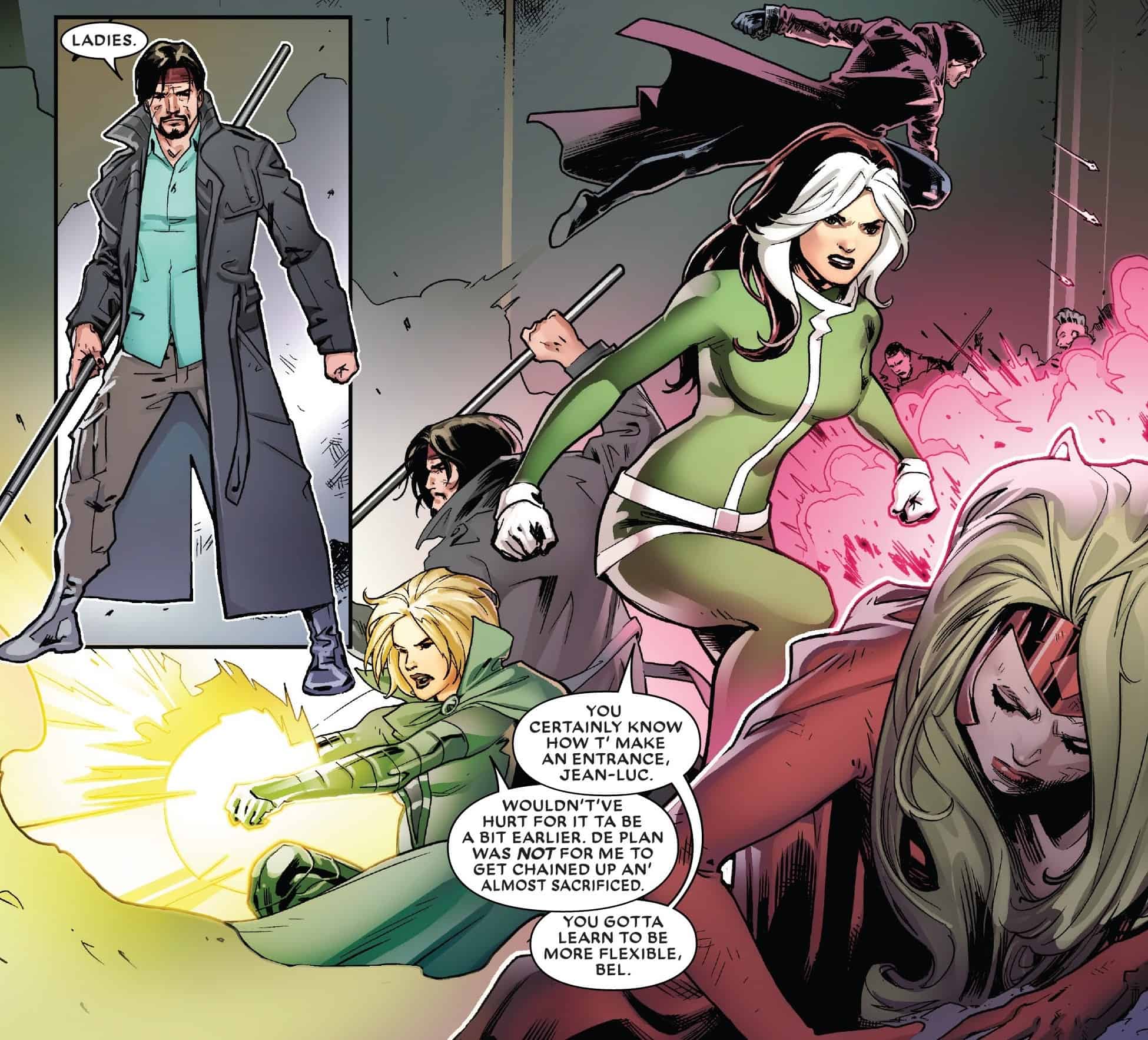 Speaking of facial features the line work on Gambits face as he makes his declaration to the Guilds does as much as the dialogue to impart how adamant he is and ensure they take him seriously. Also the moment with Gambit and Candra where he reveals his hidden projectile by spitting it is priceless. We don’t see that enough in my opinion…just how many of those DID he smuggle in anyway? Her expression when she realises she isn’t as in charge as she thought was worth it as well. This new Candra to me is more interesting than ever before. The Red Death was not her best iteration, and so this External mutant in the body of an eternal child may just be a very interesting dichotomy and I’d like to see it progress further. 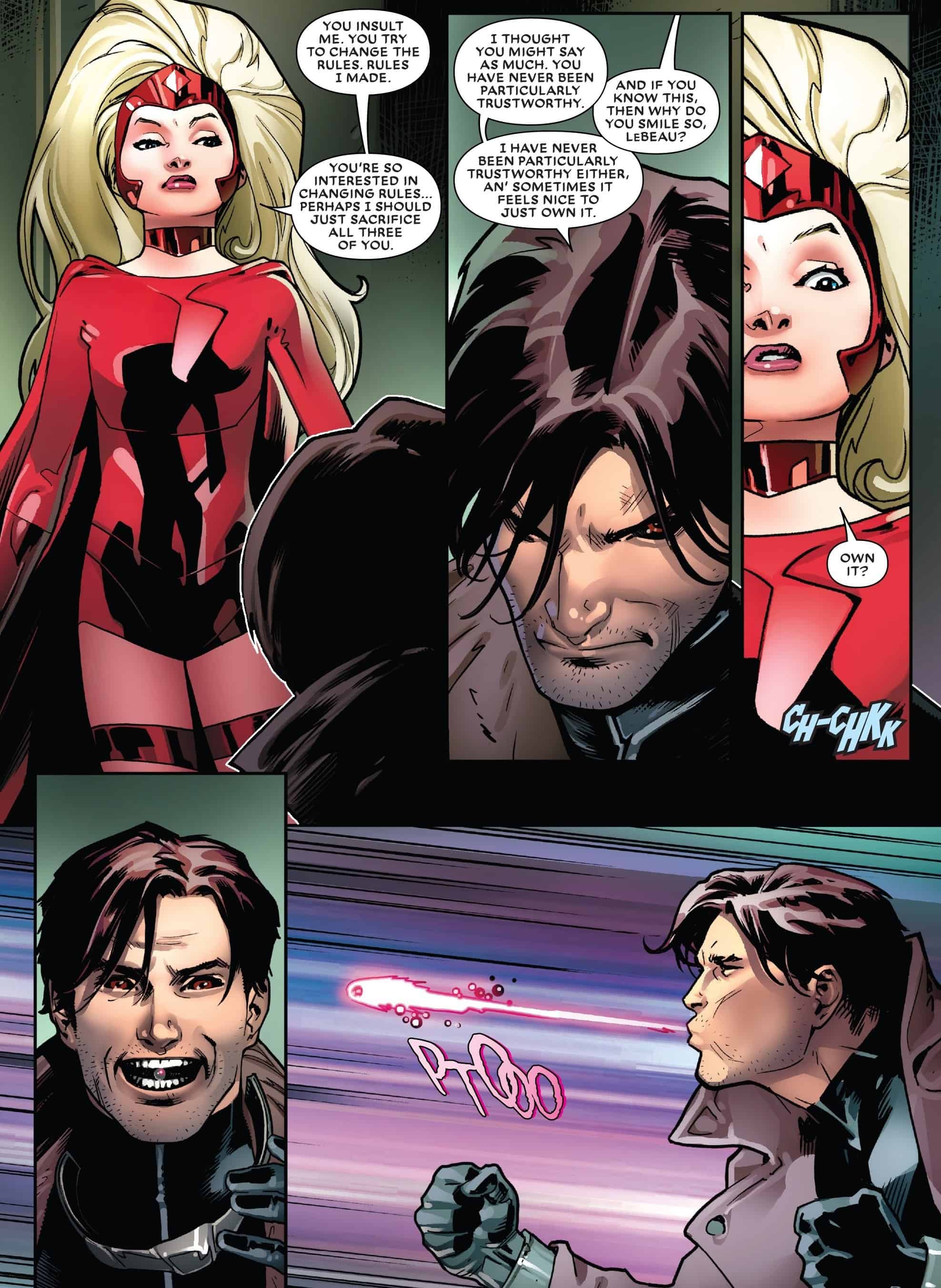 In fact the expressions throughout were organic and felt true to the dialogue, from the spitting scene right to Rogue realising she can control her fear. As always Frank D’Armata has kept the coloring suited to the scenery throughout. With the atmosphere suitably gloomy in the dungeons and yet bringing the bright welcoming homely feel to the setting of Tante Mattie in the kitchen. And Joe Sabino also takes every opportunity this issue to make his presence felt, with so many sound effects I almost felt my eardrums pop. It definitely added some ‘kinetic’ energy to the battle sequence and made the drama that much more dynamic. 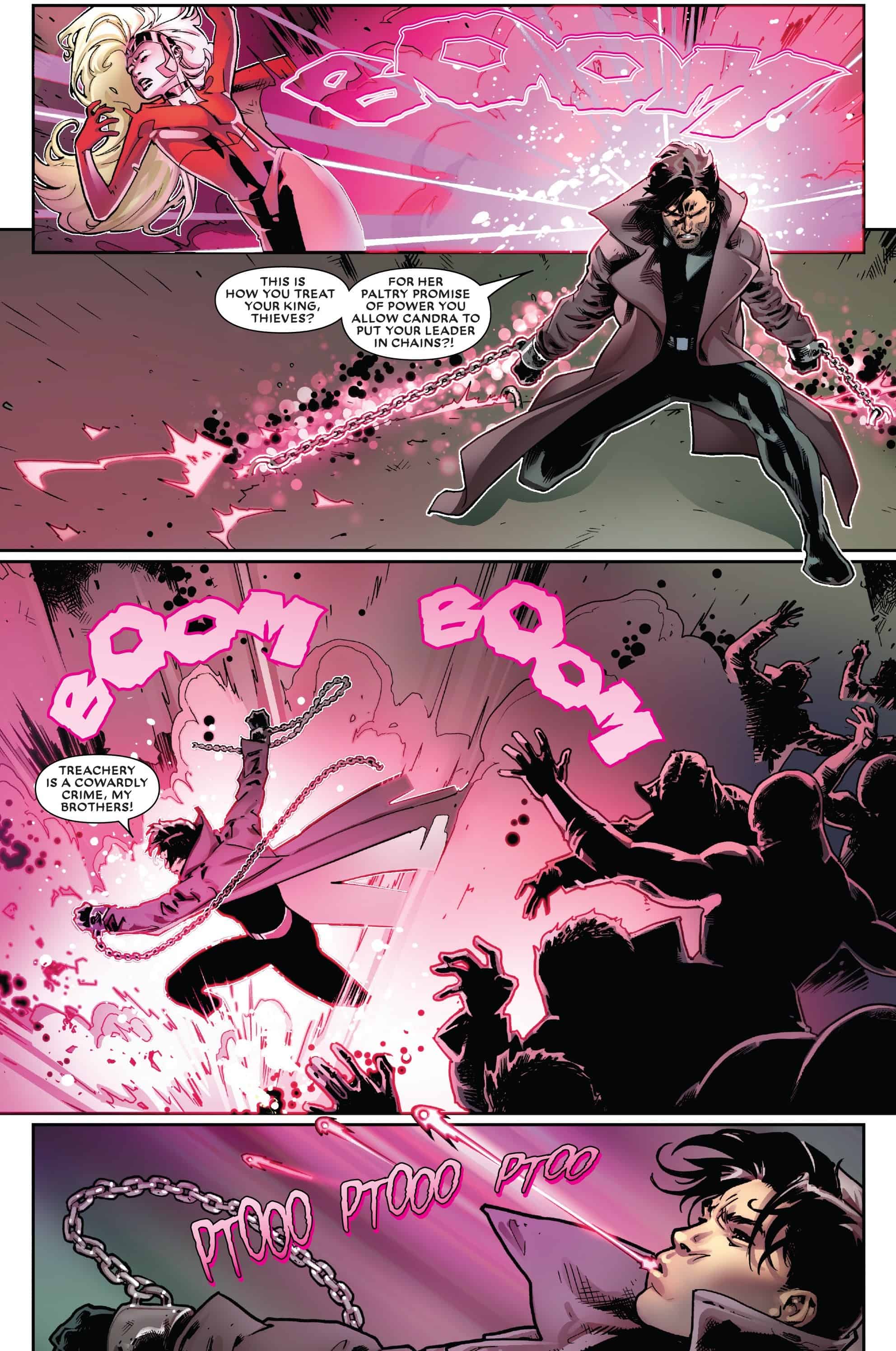 Writing/Story: And so it’s the final issue and so much resolution of the drama took place it was a major achievement to actually also fit in some prize dialogue and characterisation as well. We had the line drawn in the sand by Remy in his speech to the Guilds at the end, some baby talk and even a reunion with Tante Mattie. And we also see Rogue get to grips with her newly altered powers. And we see she has learnt a thing or two over the years from Remy regarding lock picks. And despite the constant talk of searching him last issue the Guilds and Candra clearly underestimated her, as she too has a contingency plan for dealing with restraints. Given the amount of times the couple have been spending this series in chains, it’s no surprise. 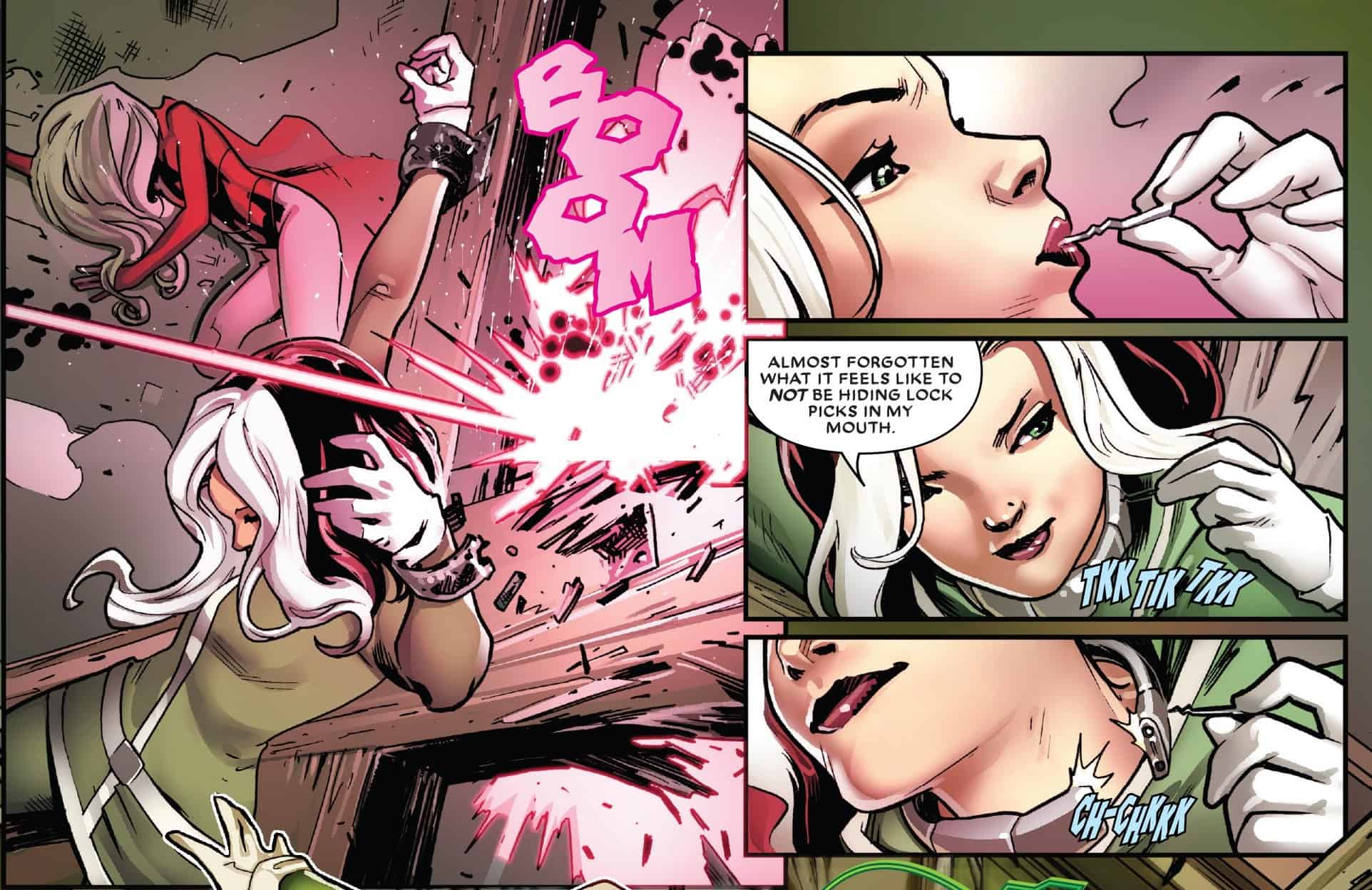 The one thing that puzzled me about the pacing was the opening. Seeing Remy left alone in a cell to come to a decision, then dragged back to the main arena to make his choice after barely an hour seemed a little off kilter. If this were a live action drama it would have been completely unnecessary. Here though I think it was for dramatic effect and to allow us time to absorb his reminiscing about Sabretooth and the last time he was given a similar choice. But had it been kept to just the staging area of the throne room there would have been no opportunity for Gambit to perform his bit of D.I.Y. surgery, or for Candra to posture the way she did or. So I approve. 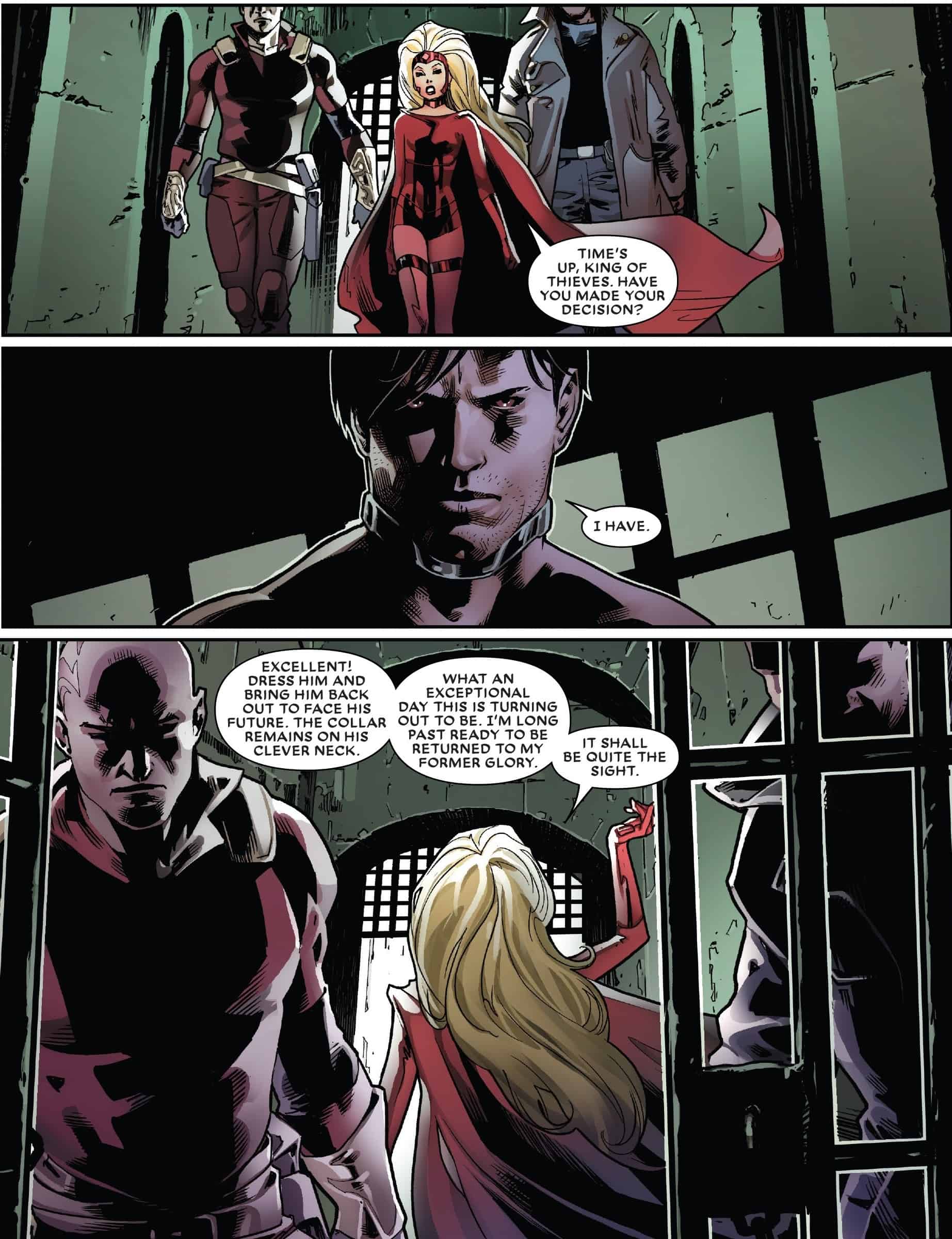 Characters: The moment he was left alone to dwell on his decision my mind had already shifted to the confrontation with Sabretooth and the last time he faced this dilemma. So it was a clever trigger to add the image, to remind us of how far he has evolved since those days. And it’s not too much of a stretch to say he is not the man he once was. He’s come a long way and Kelly has shown it perfectly here. We have Remy making the right choice without even a struggle. And also seeing Rogue in full control of her fear is as rewarding as seeing Gambit assured of his own worth. This IS a power couple. Rogue’s assurance at the end sounds to me like Kelly warning future writers not to mess with the bonds she has set up. 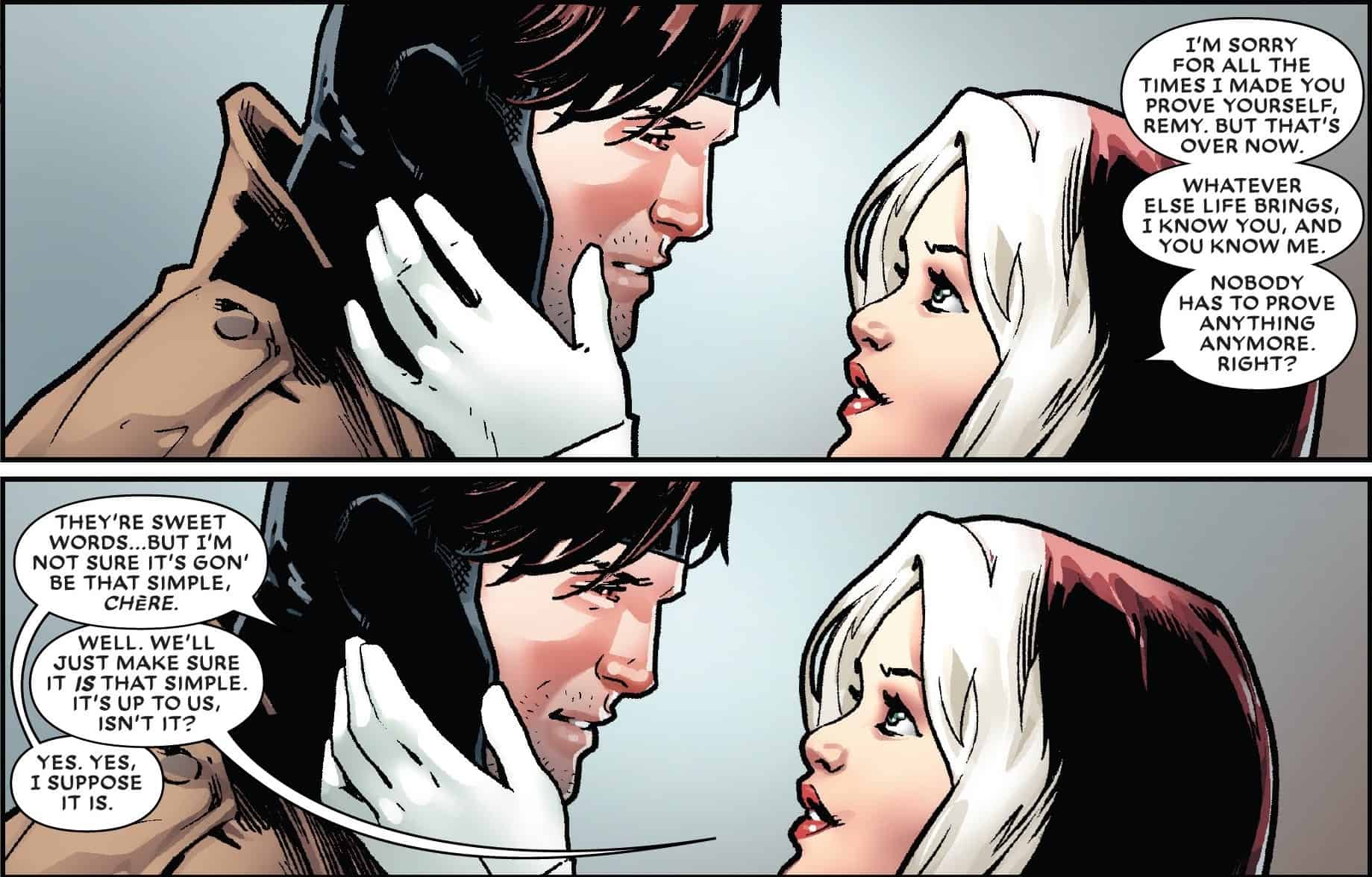 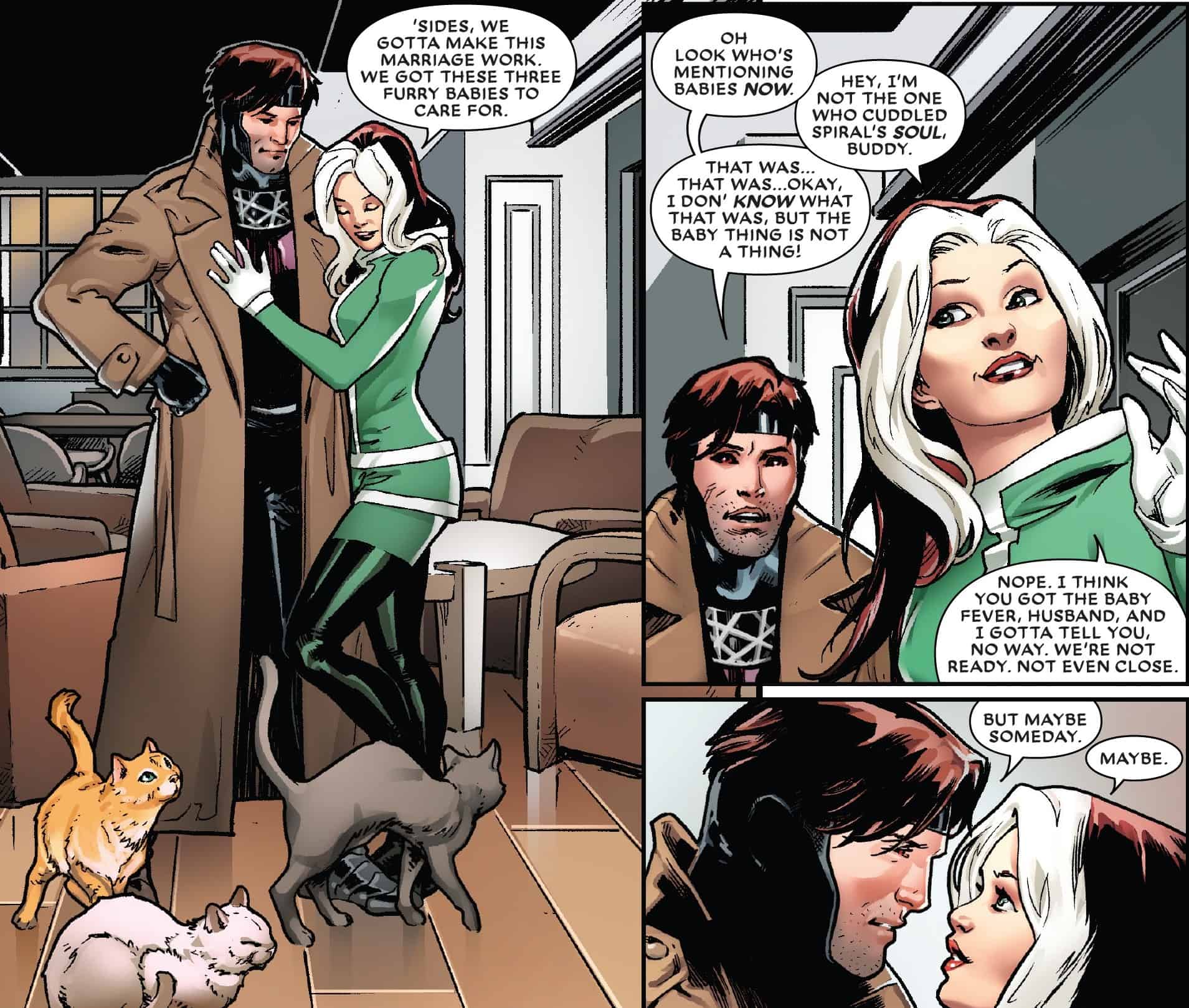 In a way this was the issue I was dreading, as it spelt the end of Kelly’s run. And even though it is the end it has achieved so much in it’s short run of 12 issues. We have had the introduction of the daughter of Xavier and Lilandra, who could surely cause a stir in the wider community, let alone on the throneworld of Chandilar. We have had a drastic alteration of Rogue’s powers that has caused an evolution in her whole strength of character. Remy himself has seen a complete overhaul in his character in the way he is no longer defined by his past and can finally trust that someone sees him as the man he could be and deserves to be. 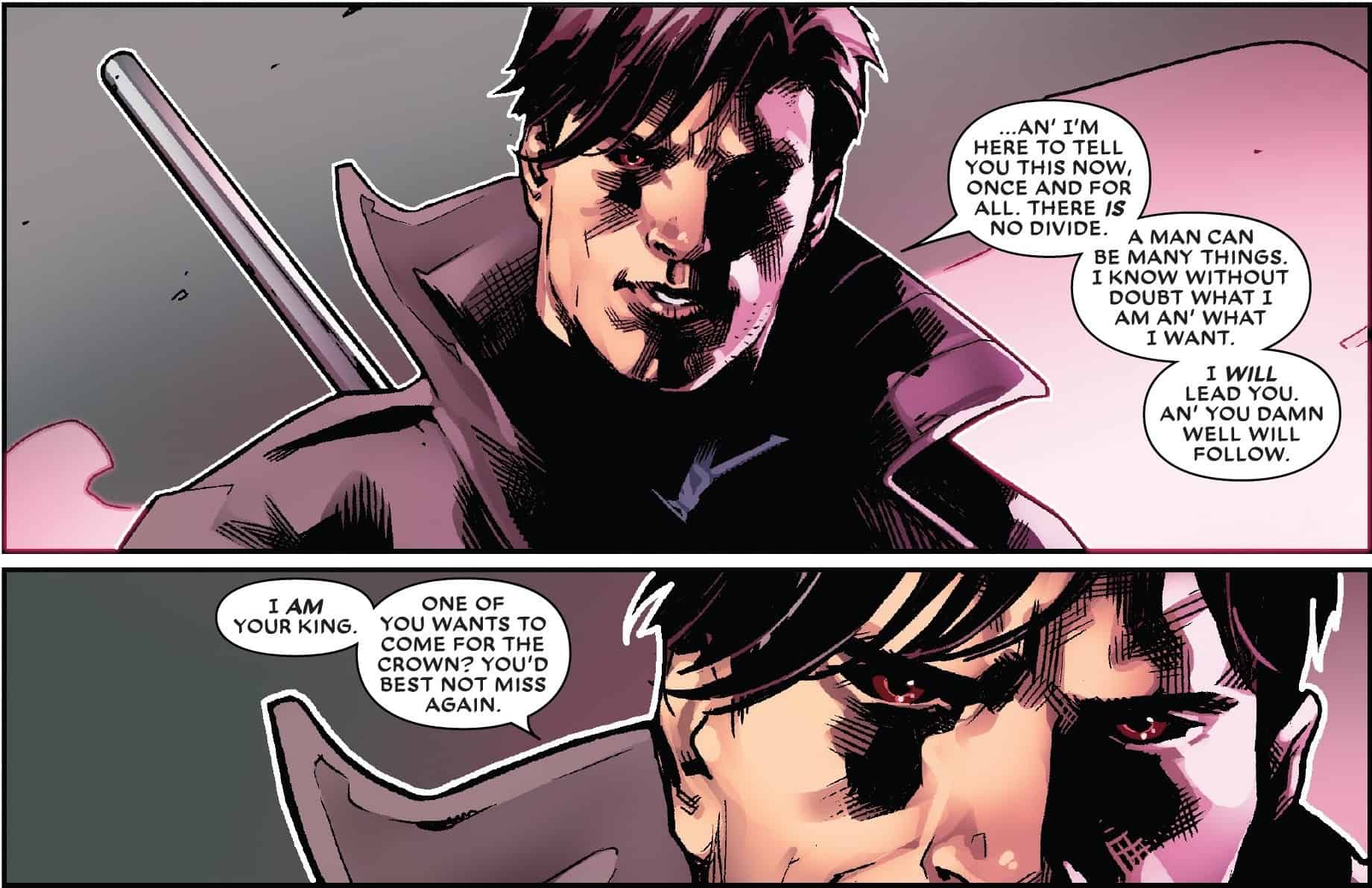 And we have the reassurance that the Thieves and Assassin Guilds are finally in some sort of stable condition. And finally and more importantly we have established the couple as being able to grow together and be stronger than as two separate individuals, capable of trusting each other against all other obstacles, even ex partners. This has also been memorable as it is a rare final issue that has ended so happily, despite the ongoing dilemma elsewhere. And the baby talk? Hmmmm. Let’s see eh?

It’s all over, and as Remy would say...”I don’t love it”. And though I wish this could go on forever, this was a fitting finale. Let’s see what Hickman will bring us. Though if he undoes all of Kelly’s great work I won’t be best pleased.