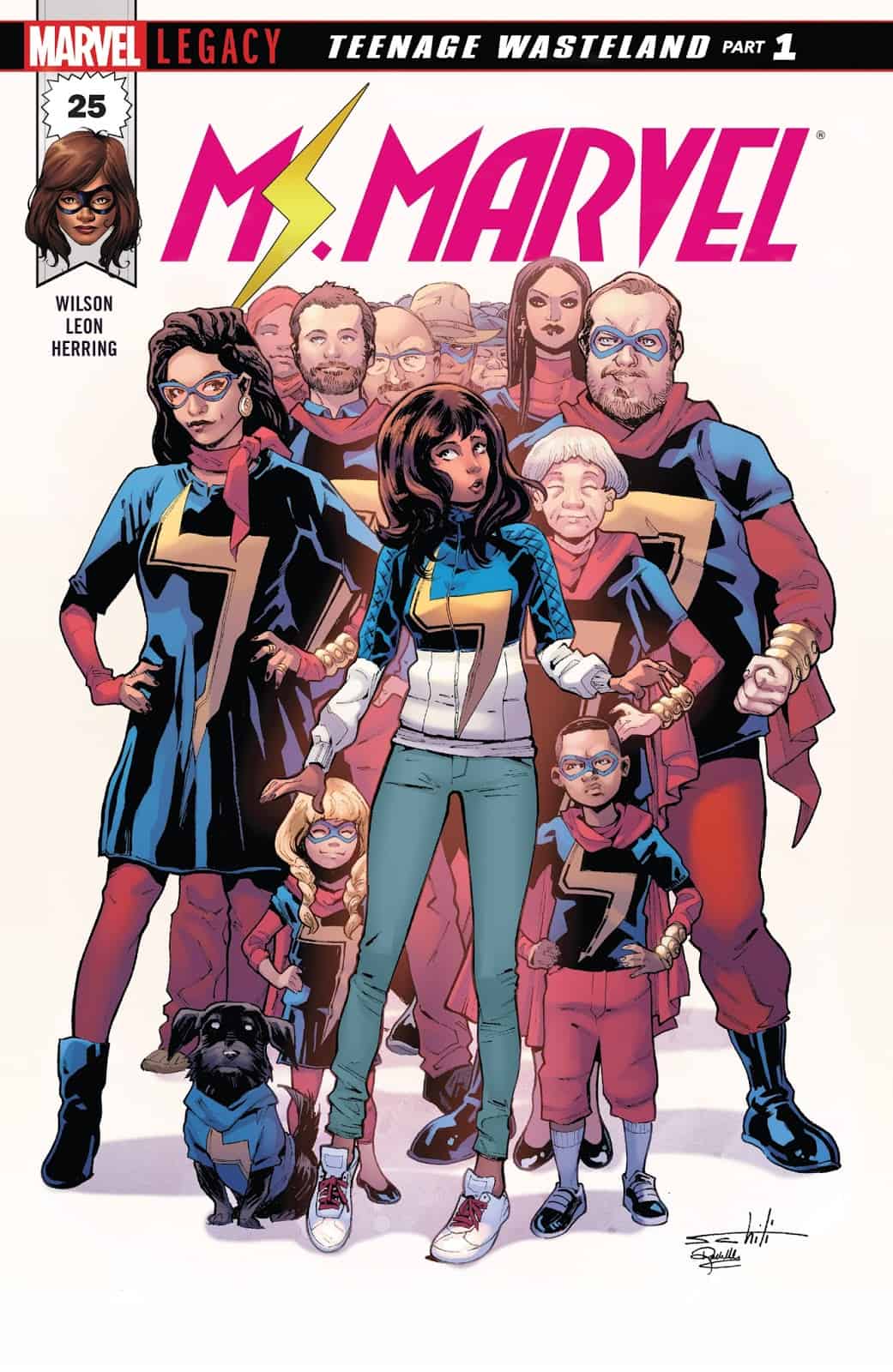 Kamala has gone missing on both her friends and her night patrol as the social justice heroine, Ms. Marvel. A few friends have decided to step in and take up the responsibility of keeping Jersey City Safe, but are they up for the challenge?

By day, Kamala Kahn is a normal high school student at Coles Academic High School. By night, she is the powerful Inhuman defender, Ms. Marvel! With her shapeshifting ability and a strong sense of justice, she defends her hometown of Jersey City from threats big to small. After stopping a runaway train with her Middle Eastern friend, Red Dagger, Kamala has decided to take a break from crime fighting, believing she isn’t essential to Jersey City’s safety.

At Bayonne Ultramax Correctional Facility, a prison just south of Jersey City, a parole hearing is taking place. After reviewing Gregory Knox’s file, the board has decided there is no reason that they should not grant freedom to the villain. As he walks out, he remarks about the unfinished business he has on the outside.

Back in Jersey City, a young woman, dressed like Ms. Marvel, prevents a robbery, saves a woman, and runs into the night. This disguised hero is not Kamala Khan, but her friend, Mike. A group of Kamala’s friends, although not savvy to her true identity as Ms. Marvel, have taken it upon themselves to defend the streets of Jersey City while Ms. Marvel is away. After collapsing upon her return to the group’s meeting spot, Mike groans that someone else must take patrol the next night. Zoe agrees to take over, as Nakia says she’s against this whole endeavor, and Gabe says he’s only providing a basement headquarters.

The next day at school, Naftali, a friend of Kamala, has come to deliver a sandwich to her as he does every Wednesday. Her friends confide that they haven’t seen or heard from Kamala in weeks. Worried and determined to deliver the sandwich to its rightful owner, Naftali decides to track her down and quickly heads to her home.

Outside the Khan household, Kamala’s brother, Aamir, is packing up a truck and getting ready to move into his new home with his pregnant wife. Naftali arrives to ask where Kamala has been, but Aamir declares he can’t reveal where Kamala is. He assures Naftali that she is somewhere her friends would never think to look. Aamir offers to deliver the messages of concern from her friends, and give the sandwich to her in the meantime. 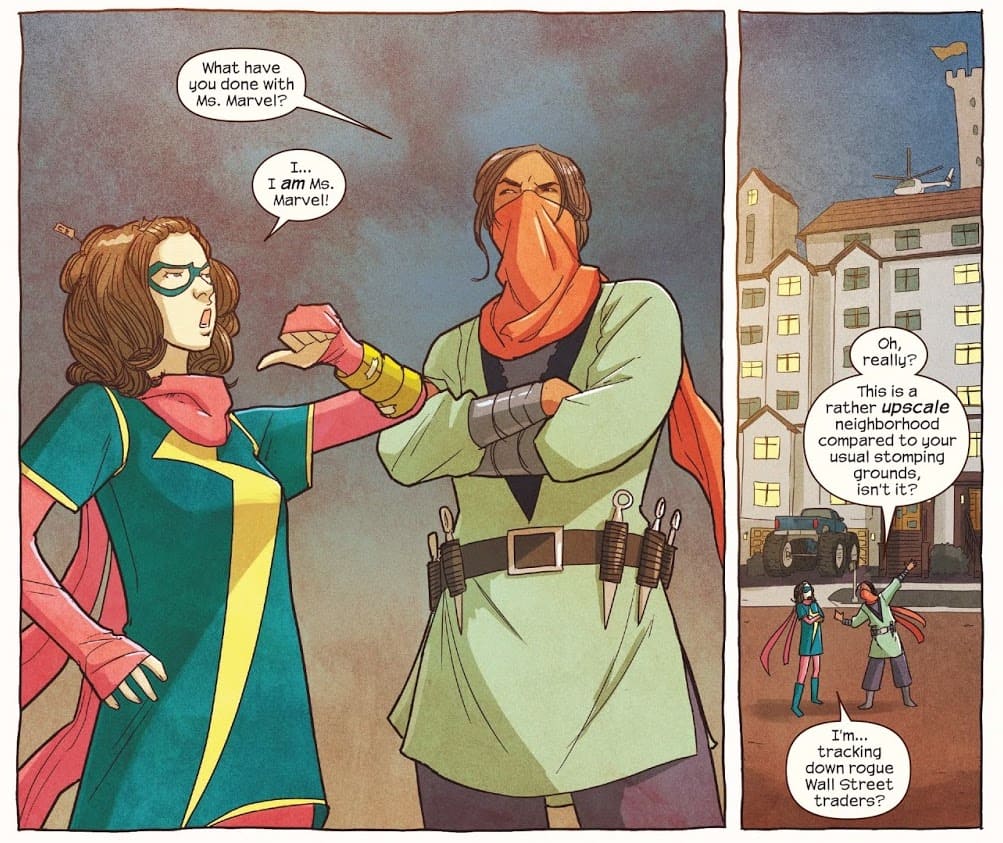 That night, Zoe is on patrol dressed as Ms. Marvel. She bumps into Red Dagger and is interrogated as to the whereabouts of the real Ms. Marvel. An old man on a scooter whizzes by, fleeing from his retirement home, and they decide to investigate. The old man claims that there is a science dungeon at the facility, and he is trying to escape. They disregard his ramblings and drag him back to the recreational room. Deciding to look around, Red Dagger and Zoe are caught by Gregory Knox, who has disguised himself as an orderly at the home. Upon being kicked out by Knox, they are ambushed by a hybrid robot/chameleon. 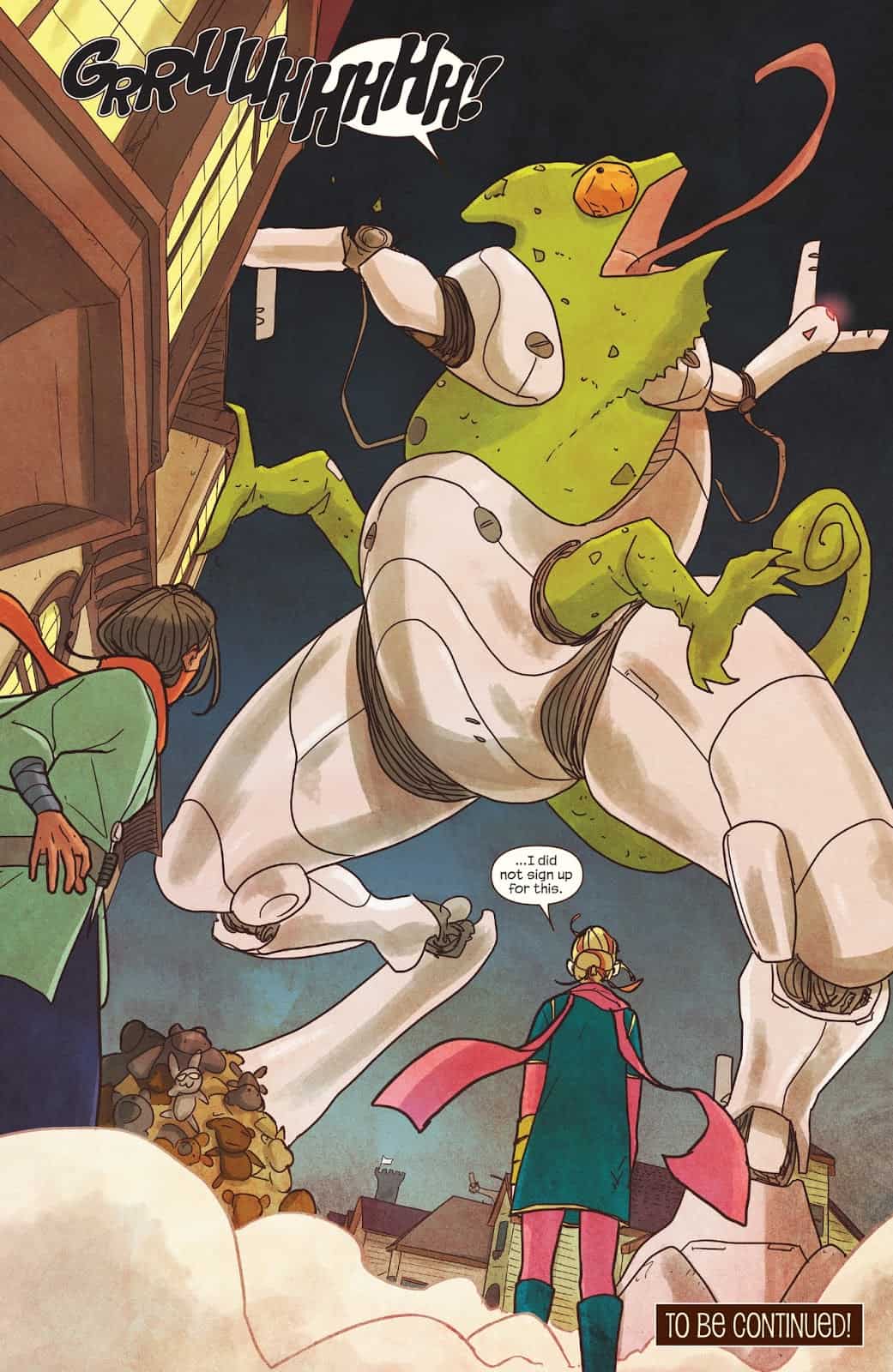 Kamala feels like Jersey City doesn’t need her, so she’s taken a break. After losing her best friend, her mentor, and seeing some of her friends turn on her to join her worst enemies, Kamala is starting to wonder if she really is the hero she wants to be. Her most recent adventure with Red Dagger has also shown her that the media and citizens of Jersey City are looking for a fresh face to call their hero.

This issue builds up a few indicators of Kamala’s importance to Jersey City.. Her entire friend group is worried not only about Kamala Khan but about Ms. Marvel. Not even aware her dual identity, her friends decide that Jersey City needs to be convinced that Ms. Marvel is still patrolling and take it upon themselves to keep up appearances for the hero. 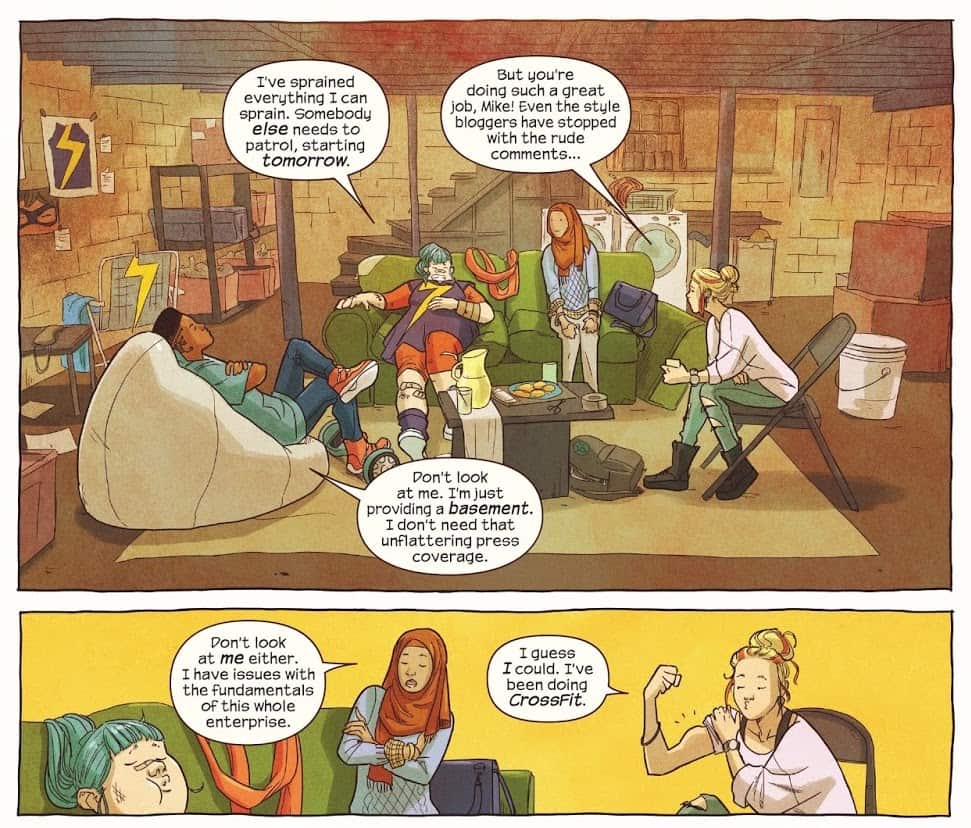 However, Kamala is needed at home as well. Her brother is about to be a father and is moving from the family’s home. His expression of just how much he needs Kamala is an insight into Kamala’s feelings about the world needing Kamala Khan more than it needs Ms. Marvel. This duality is at odds in Kamala’s mind, and will ultimately lead her to make some tough decisions down the road.

Final Thought: An entire issue missing the main character is always a risky one. However, with the titular character missing from all scenes, we see just how much she is needed throughout different aspects of her life. A well-paced issue that is sure to build into a greater story arc showing the true importance of not only the hero but of the girl herself.