Why Do CrossFit If You Can’t Punch a Few Bad Guys? (Ms Marvel #26 Review)

Kamala is still refusing to be found while her friends deal with the revelation that The Inventor is back in town and out for revenge. 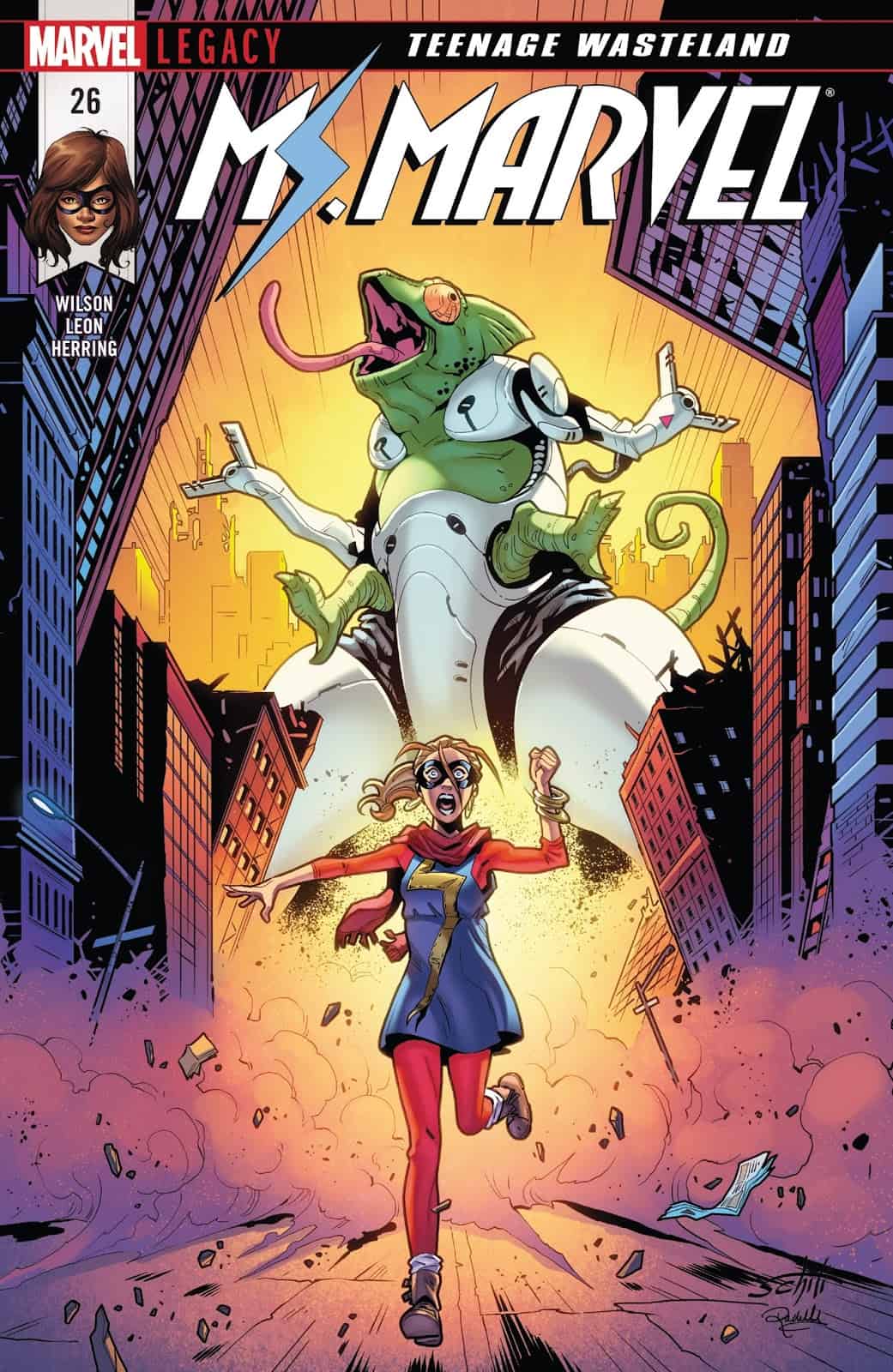 What You Need To Know:
By day, Kamala Khan is a normal high school student at Coles Academic High School. By night, she is the powerful Inhuman defender, Ms. Marvel! With her shapeshifting ability and a strong sense of justice, she defends her hometown of Jersey City from threats big to small. After stopping a runaway train with her Middle Eastern friend, Red Dagger, Kamala has decided to take a break from crime fighting, believing she isn’t essential to Jersey City’s safety.

Kamala’s friends, Mike, Zoe, Nakia, and Gabe have decided to take patrol, but are all concerned Kamala might be in danger. Another friend of Kamala, Naftali, has decided to investigate her disappearance and is told by Kamala’s brother that she is safe, but to stop searching for her. While on patrol, Zoe runs into the Red Dagger, who aids her in the return of a runaway old man from a retirement home he says is experimenting on residents. Upon searching the home, Red Dagger and Zoe are attacked by a half robot, half chameleon hybrid creature.

Zoe, dressed as Ms. Marvel, and Red Dagger take on the science experiment outside the funeral home. Using her Crossfit training, Zoe tries to attack but is better suited as a distraction while Red Dagger takes apart the wiring of the machine. After defeating the monster, Zoe realizes she’s seen work like this before from the previously thought dead Inventor. She informs Mike, Nikia, and Gabe this theory, but they are all sure that the inventor died in his first run-in with Ms. Marvel. Zoe isn’t so sure after what she’s seen and runs off to the retirement home to investigate the science dungeon claim. 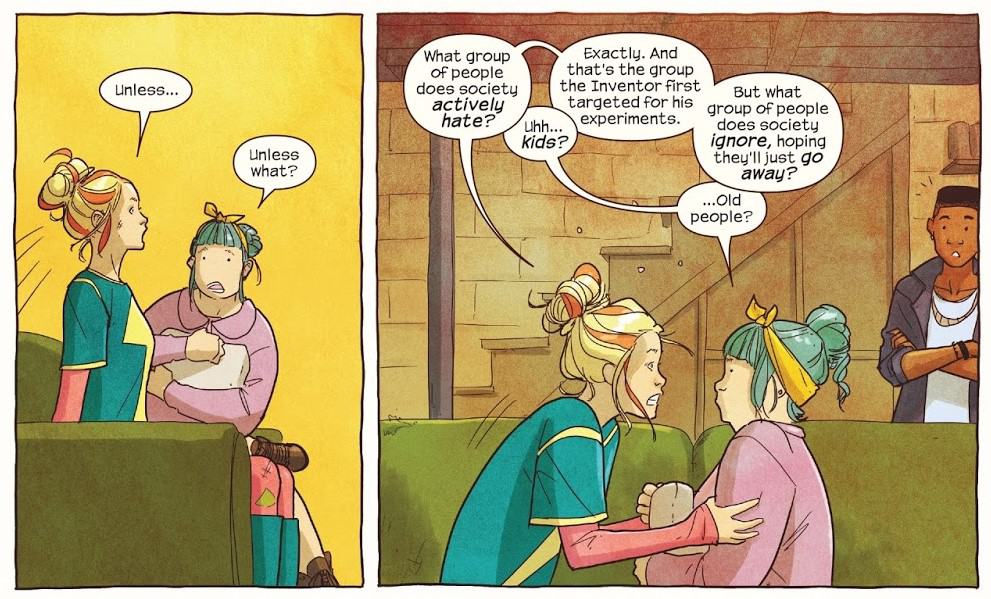 Elsewhere, Naftali is still vigilantly looking for Kamala. He asks his uncle Aaron, owner of the Elite Meat Deli if Kamala has stopped by. Aaron says he has not seen anyone, but if she doesn’t want to be found, then he should give up his search and assures him she will turn up eventually. Aaron is then struck with the memory that a girl matching Naftali’s description of Kamala had been in, but she wasn’t wearing her normal street clothes, she had on a uniform.

Zoe finds the old man who had claimed there was a science dungeon at the retirement home. She follows the man to a cellar where they find a handful of missing residents all connected to machines and being used as a power source similar to The Inventor’s previous plot. Zoe takes this as confirmation that the inventor is alive and full confirmation walks in when The Inventor catches Zoe and the old man releasing his prisoners.

The next day, Mike, Nakia, and Gabe are worried when they haven’t heard from Zoe. While they try to calm themselves down, the Red Dagger finds them and says they haven’t been too great at covering their tracks in their superhero endeavors. He requests their help, and they all gladly dress as Ms. Marvel to run out and save their friend. 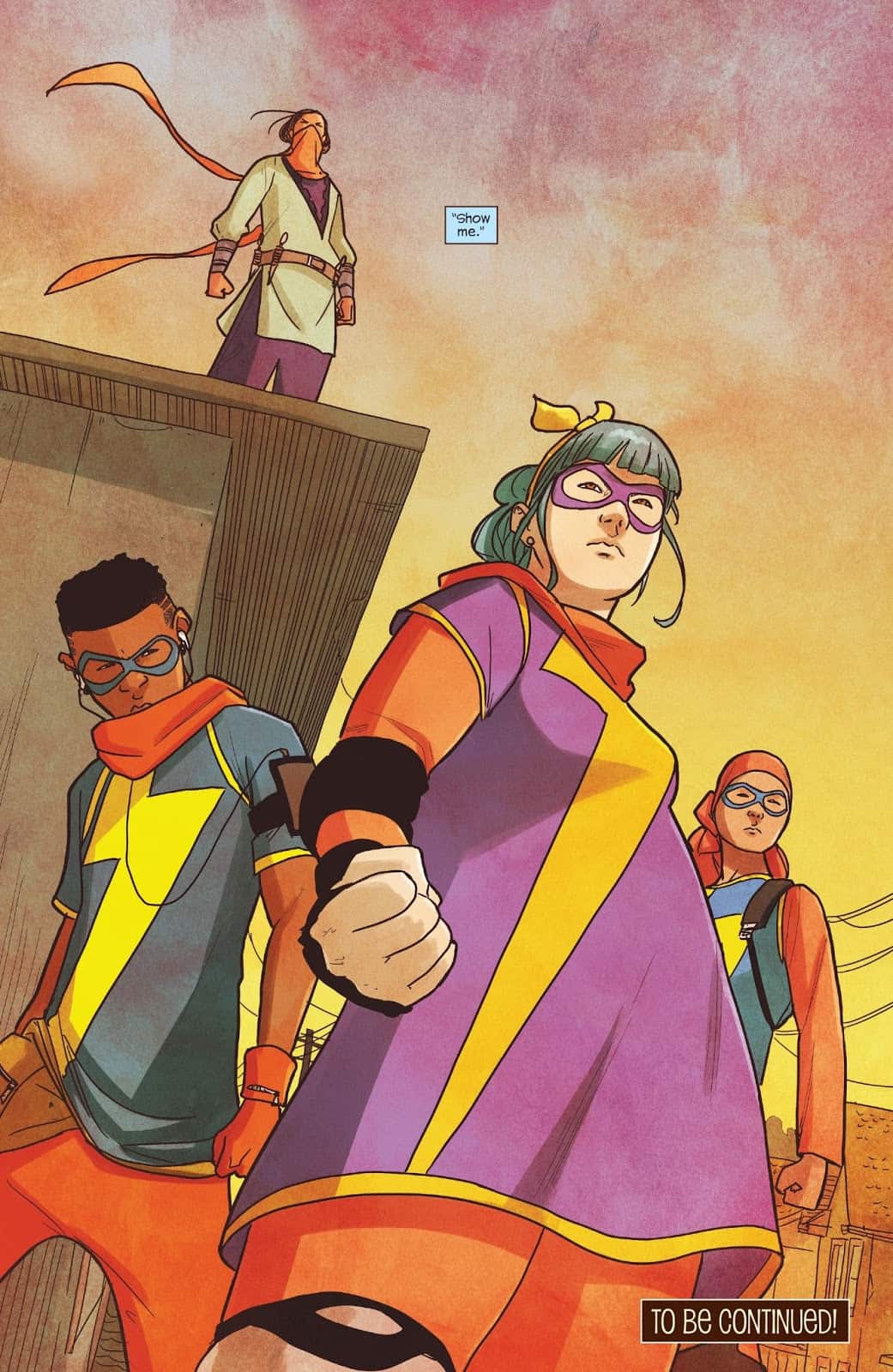 What Just Happened?
The second installment of this story arc feels very short. What turns into a lot of talking heads with very little actually moving forward can feel a little stale. Clearly working towards a transition point into the action, we are reaching the core of what the story arc will prove to be. Now that villains and heroes are in place, it should be easier to see a bring the story to its climax.

With her friends ready to stand up and save Jersey City from The Inventor, where does Kamala come in? Will we see that she was right and that her friends don’t need her after all? Or will they fail and need her more than ever? Assuming the story arc is to prove Ms. Marvel is the hero Jersey City needs, it will be interesting to see how far her friends can go before they reach their spectacular failure.

Final Thought: A transitional issue in an interesting study of what Jersey City would be like if there was no Kamala Khan moonlighting as Ms. Marvel. Pieces are falling into place to create the ultimate climax, but for now, the issue turns into a lot of talking heads that seem to whip about at lightspeed to get to the action.