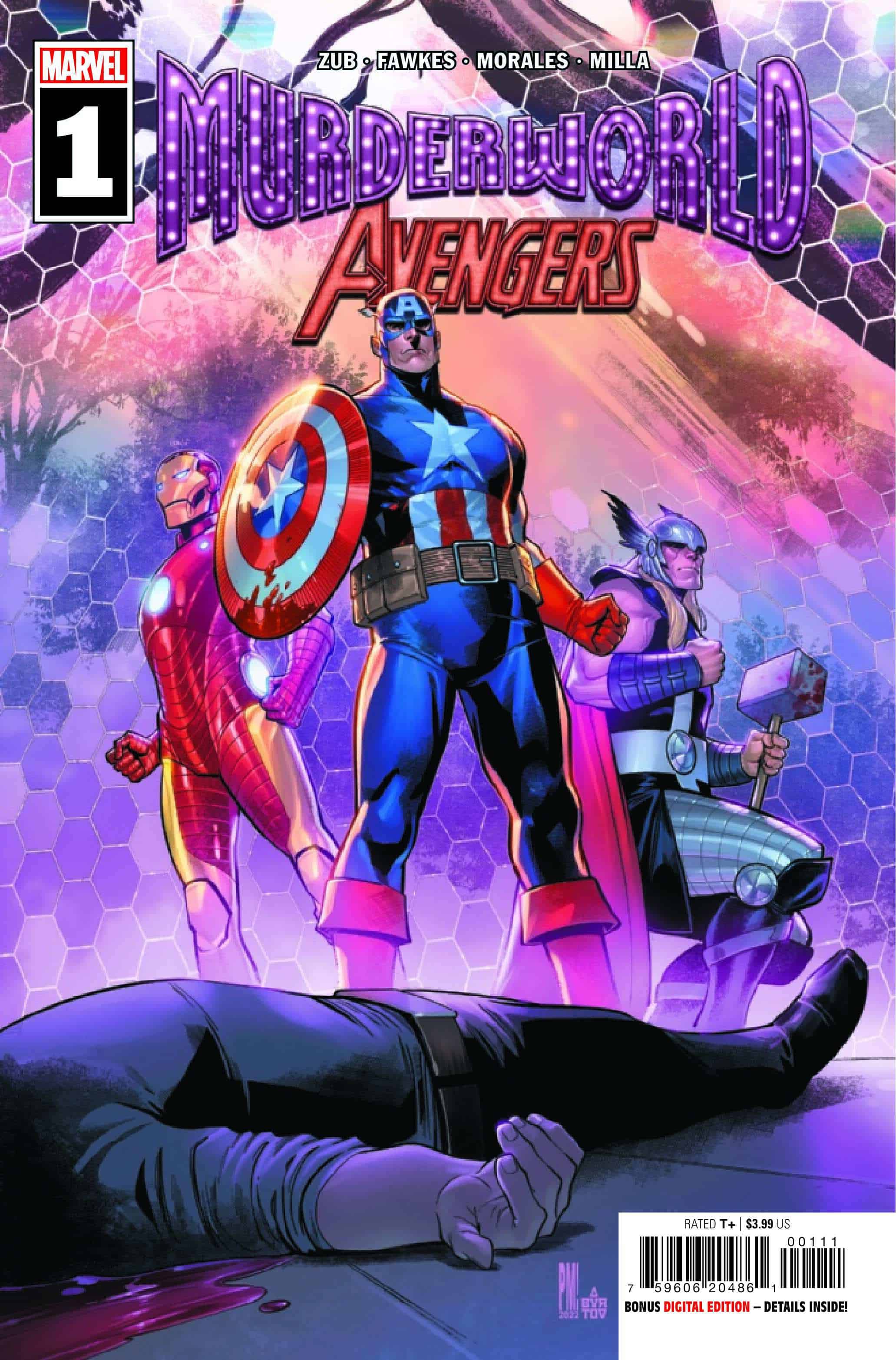 Ready. Set. Die! Hundreds are killed every year in an elaborate secret tournament run by a sadistic man with nearly limitless resources at his fingertips.It’s not an urban legend. It’s not a myth – MURDERWORLD is real! It’s online, and the gruesome truth has been hidden from everyone except its victims – until now! Meet Paul Pastor, the extraordinary young documentarian who’s going to expose it all…with some super-powered help. The Black Widow has a personal grudge to settle with Murderworld mastermind Arcade – but can she stop this game before it kills again? 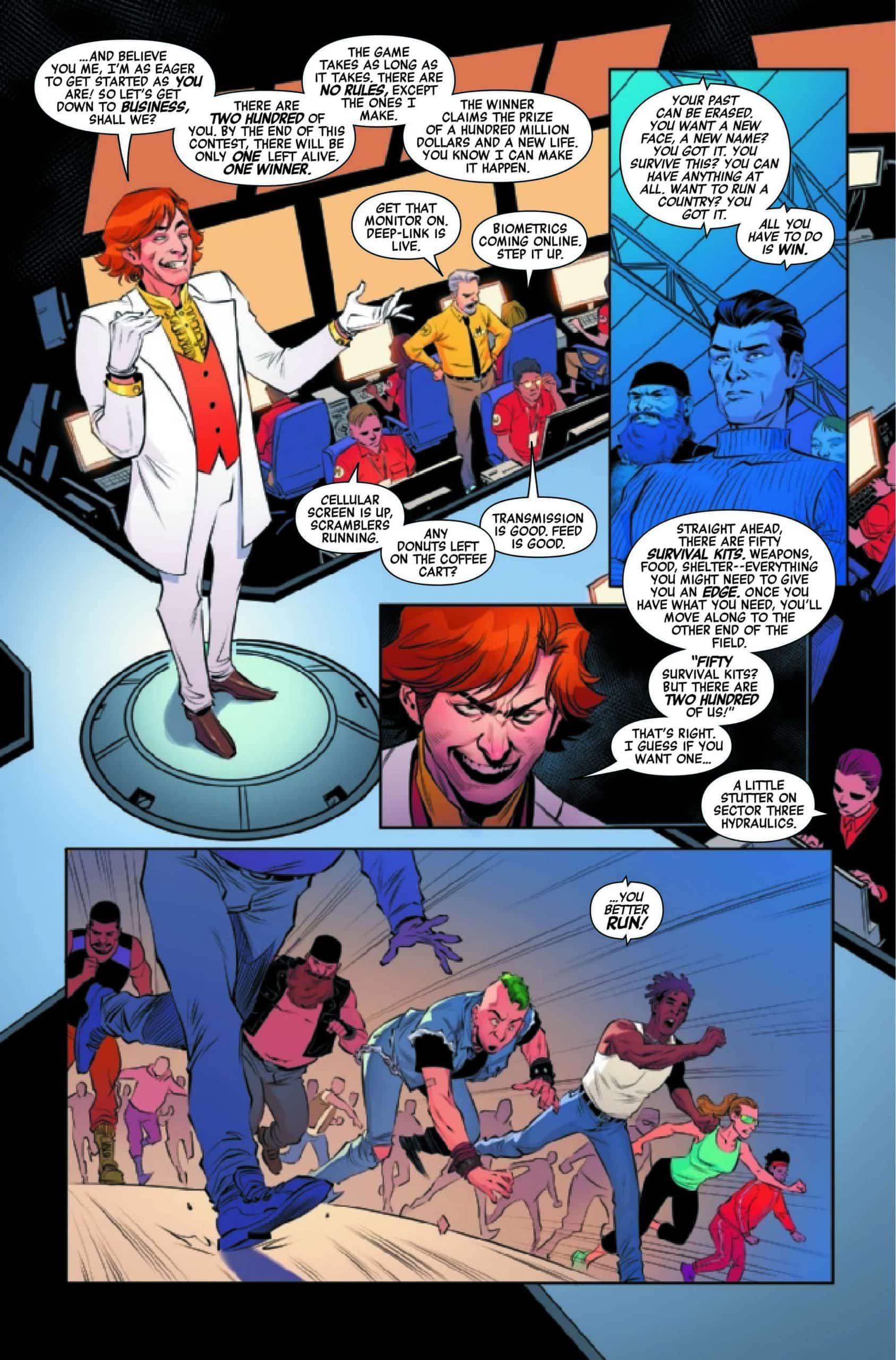 There may be no greater murderous sociopath in the Marvel universe than Arcade. Beyond that he has few ambitions. Most writers show him at his happiest when he’s trying to kill as many people as possible–especially when he has the chance to go after heroes. Unfortunately he’s often easy to beat and, while his death traps are elaborate, there are no major casualties. But in Murderworld Avengers, Arcade gets his time to shine.

Murderworld Avengers’ concept isn’t particularly novel. Arcade invites 200 people to participate in a game that will kill off 199 of them, leaving the winner to collect one hundred million dollars. And of course the game is streaming on the dark web. But the novelty here is that Arcade isn’t doing this as mainstream entertainment as in Death Race 2000. He’s not doing it to control a population like in The Hunger Games. The contestants don’t appear to be desperate for money in order to survive in everyday life like the contestants in Squid Game nor are they criminals as seen in The Running Man. Arcade is killing people because he can and he thinks it’s fun.

The main character in Murderworld Avengers is a massively successful 18 year old content creator named Paul. In order to drive even more views and subscribers, Paul is looking for the (urban legend?) underground deathmatch called Murderworld. This attracts Arcade’s attention who extends an invitation to Paul to do a documentary.

You can probably guess how that goes.

Unsurprisingly, Murderworld Avengers isn’t a deep comic. There’s no complicated subtext. Paul has less of a character arc and more of a character straight line. And Arcade is Arcade. So coming to this book expecting more than fun is a mistake. The enjoyment here is found in watching contestants drop like flies in wonderfully violent ways and getting caught up in how Paul is managing to survive the contest.

It’s also fun watching Arcade in full bloom, able to shine as the crazy killer he’s always billed as but rarely gets to be.

And no shortage of the fun in this book comes from Morales’s art. Paul is a happy go lucky character in the beginning, wearing his good fortune in life on his sleeve. He maintains that happiness when he gets the invitation to Murderworld. This sets up a great contrast as he spends the last two thirds of the book ranging from worried to scared to terrified.

Arcade is also presented in full-on, unvarnished insanity here. Morales draws him exactly as anyone who enjoys Arcade wants him to be drawn: thrilled at his own homicidal genius. The guy constantly looks like he’s about to break into song and dance. If there’s going to be a book about Arcade actually getting to kill people, he absolutely needs to look like he’s having fun.

As long as you don’t come to Murderworld: Avengers expecting to do more than laugh and smile, this will be a great book. Zub and Fawkes at last give Arcade the chance to do what every fan of the character always wants: kill, kill, and kill some more. Paired with Morales’s art and Milla’s expressive colors, this is a win.