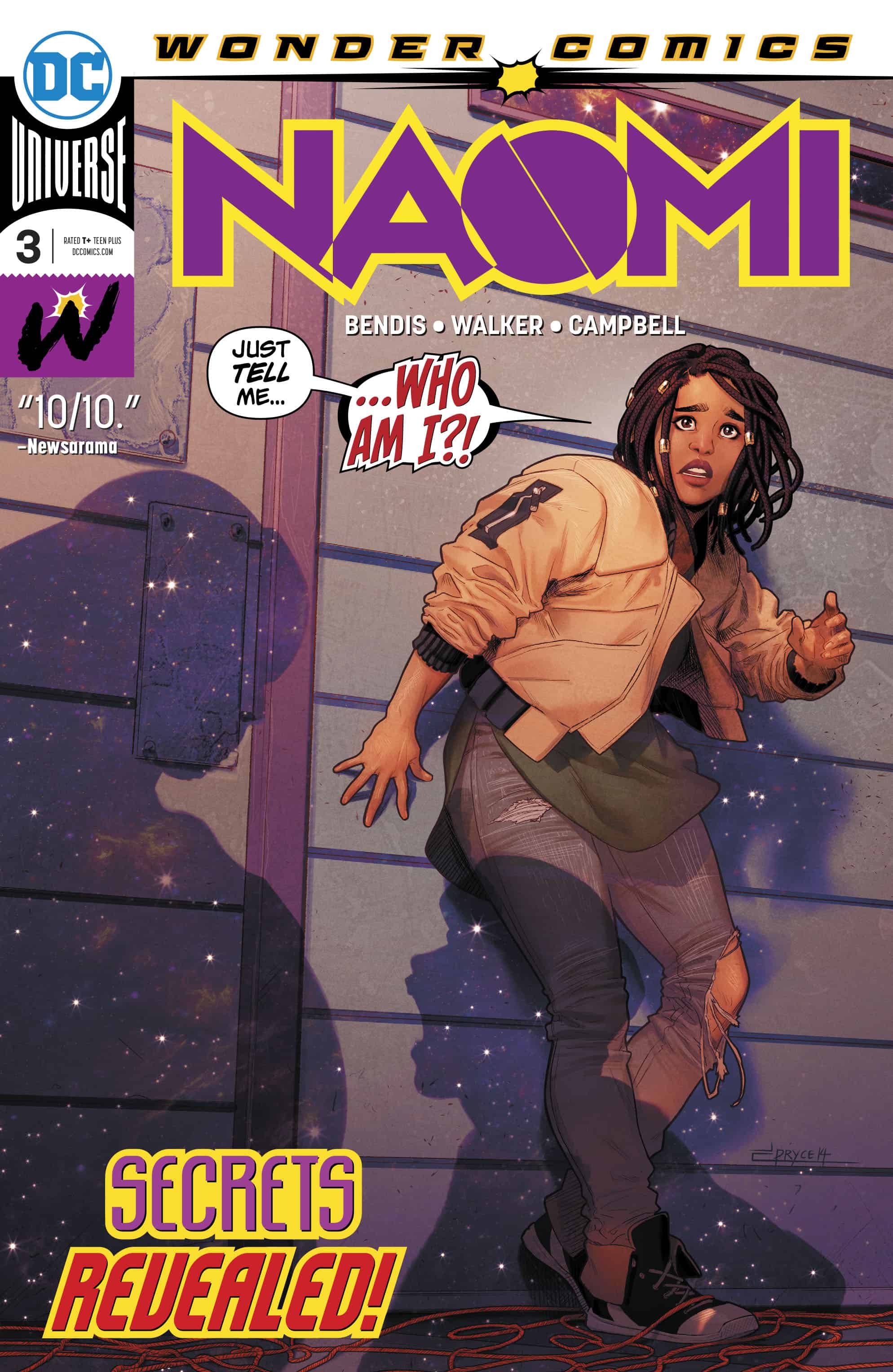 Naomi, determined to shed light on her mysterious origins, desperately confronts the man known only as Dee. 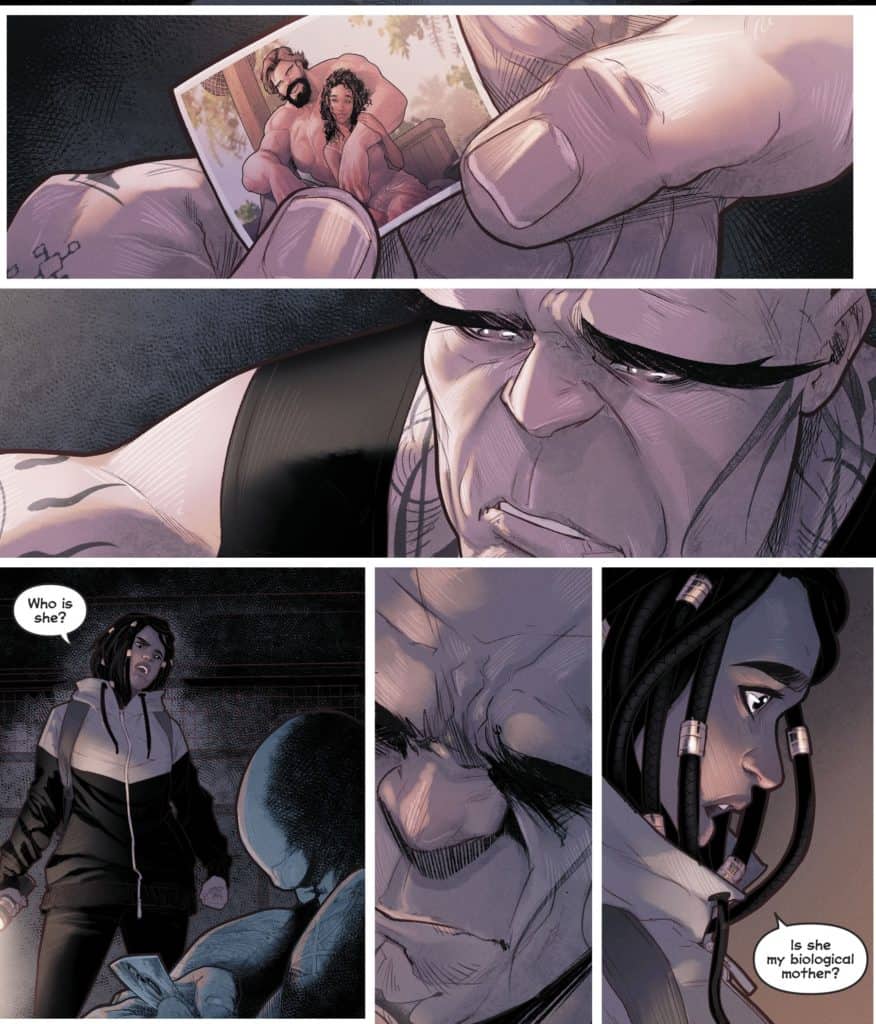 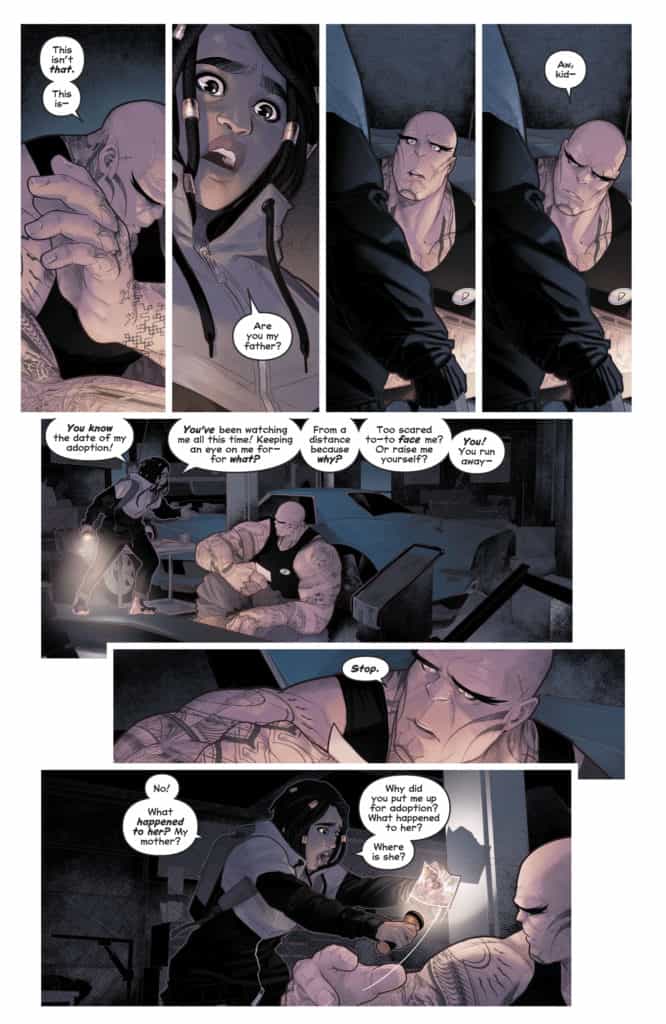 Dee holds one whopper of a secret. But before its relevance can be further gotten into, Naomi's adopted mother shows up, furious that her daughter sneaked out into the night... 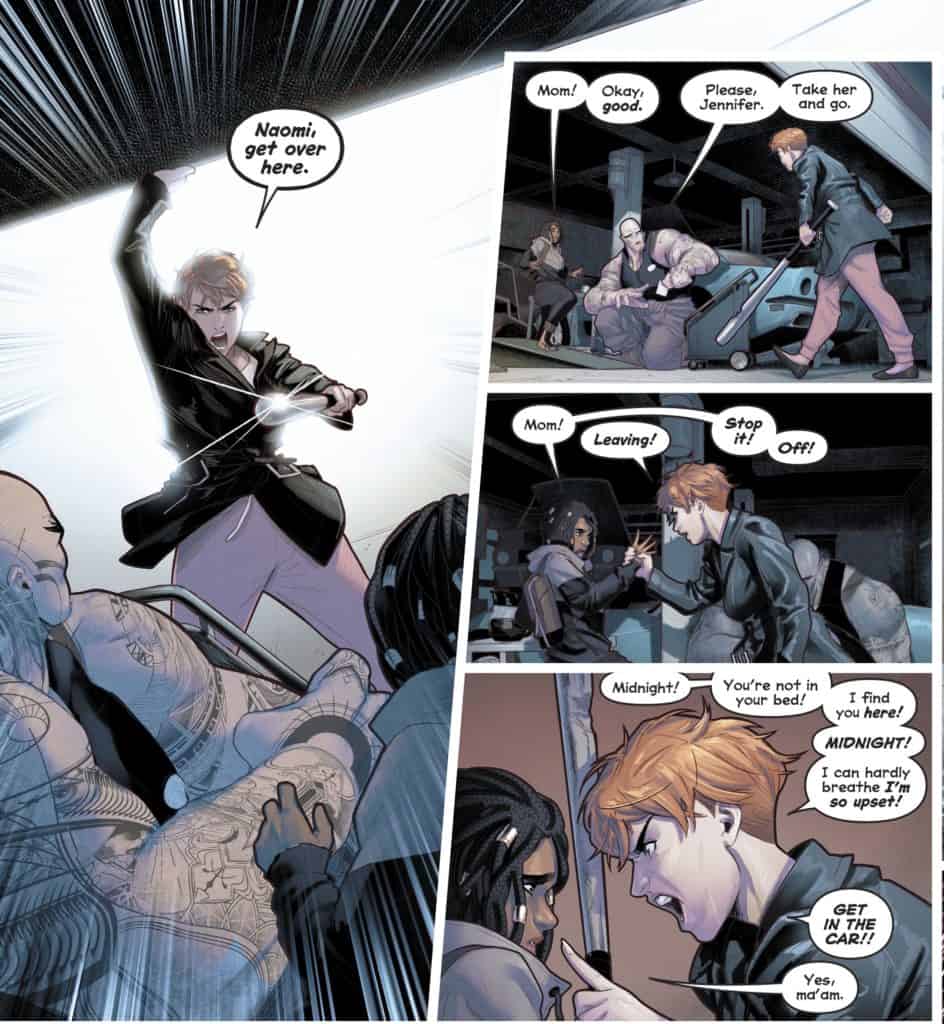 ...among other things, that suffice to say, startle Naomi to her very core. She's never seen her mother act this way: 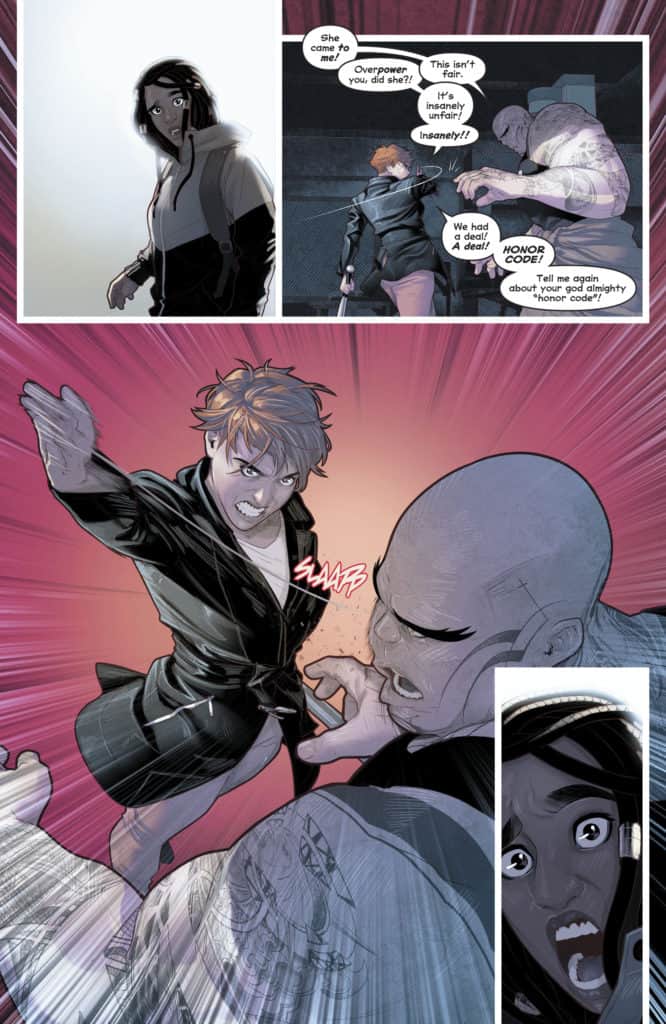 And ultimately, the confrontation creates more questions than answers. Naomi's parents realize the time for secrets is over, and drive off to the countryside to finally provide the explanations she's been waiting for! 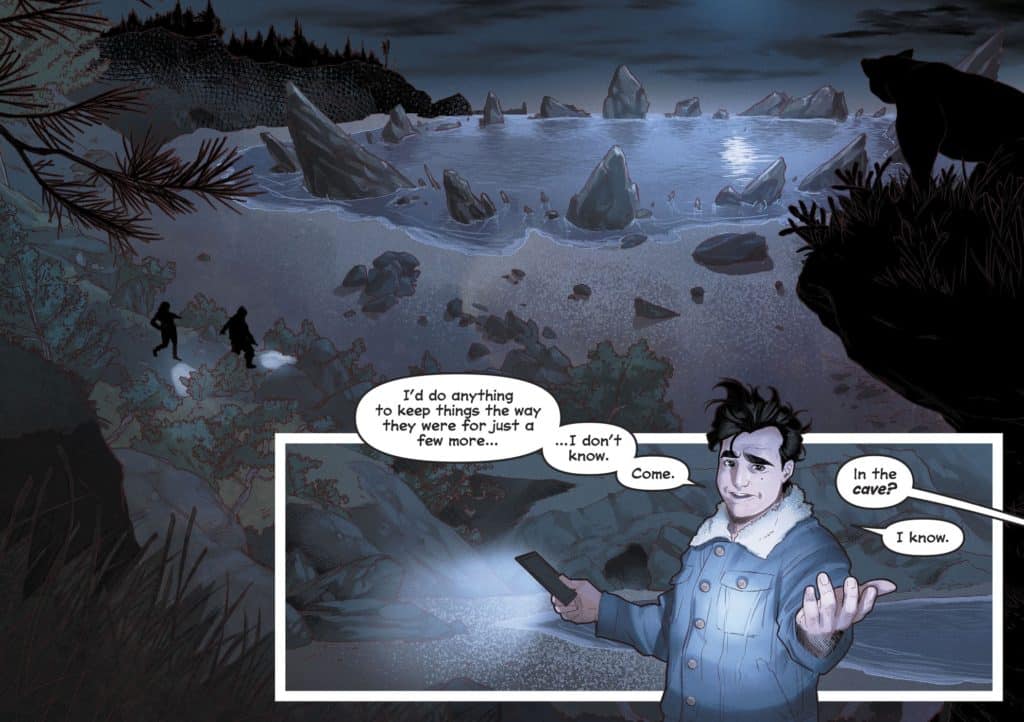 On the surface of it, Naomi #3 suffers a bit from decompressed storytelling-syndrome. In brief: Naomi confronts Dee, Dee tells part of a story, storytime is busted up by Naomi’s mom. Then the not-so-happy family drive to a cave and more secrets are revealed. Scene!

But to so greatly reduce the story herein is to do it a grave disservice.

Writer Bendis’s decompressed storytelling techniques may infuriate some of the old guard of comics readers, but there’s a wealth of emotional depth on display this issue. The man known as Dee starts the whole rollercoaster ride off with a bang, nursing deep regret, aching loss, and maybe just a smidgen of guilt. Naomi’s increasing desperation plays off his emotional scars wonderfully, ratcheting up the tension. Naomi’s mother’s outburst – and subsequent slap – blow the entire encounter sky-high, and in the process reveals that there’s much, much more we don’t know.

In a book like this that’s reliant on depth of character rather than big action set pieces, every beat matters, especially the quiet ones. Those are the moments the story takes a moment to breathe, such as this masterfully rendered moment just after Naomi asks Dee if he’s an alien:

The taut close-up, coupled with artist Jamal Campbell’s masterful use of gutter space between and around panels, lets the reader live in the seconds, frozen in time, for Dee as he considers the ramifications of revealing the answer to what he’s been asked. (Bonus points to Campbell for the flash of yellow in Dee’s eye the second he realizes his secret is out.) Here’s another great example:

The way the “camera” pushes in on Naomi’s mother as she and her father walk into the unknown allows readers to really feel her isolation, frustration, and fear over the entire situation. It also serves to visually move Naomi and her father out of this scene and into the next one without any awkward cuts.

Brian Michael Bendis is a writer who has always excelled at this sort of stagecraft, pulling from the O.G. Will Eisner playbook and treating the entire page as a singular work of art rather than “just” a collection of juxtaposed panels. The difference is, Bendis is more clearly defined by his cinematic influences. And in Jamal Campbell, he has found yet another artist in a very, very long line of them who is able to make that style look immaculate on paper. Naomi may not be the most bombastic book on the shelves, but it doesn’t have to be. At the end of the day this book’s core is one person’s search for her own story. The end product speaks for itself, crafted by its writers and artist as a true labor of love.

Naomi #3  quietly moves its mystery forward with a healthy dose of deep emotional beats, pulling the reader in and leaving them immediately wanting more. This book won't be for everyone - it's quiet yet strong in a way few comics are. Highly, highly recommended.