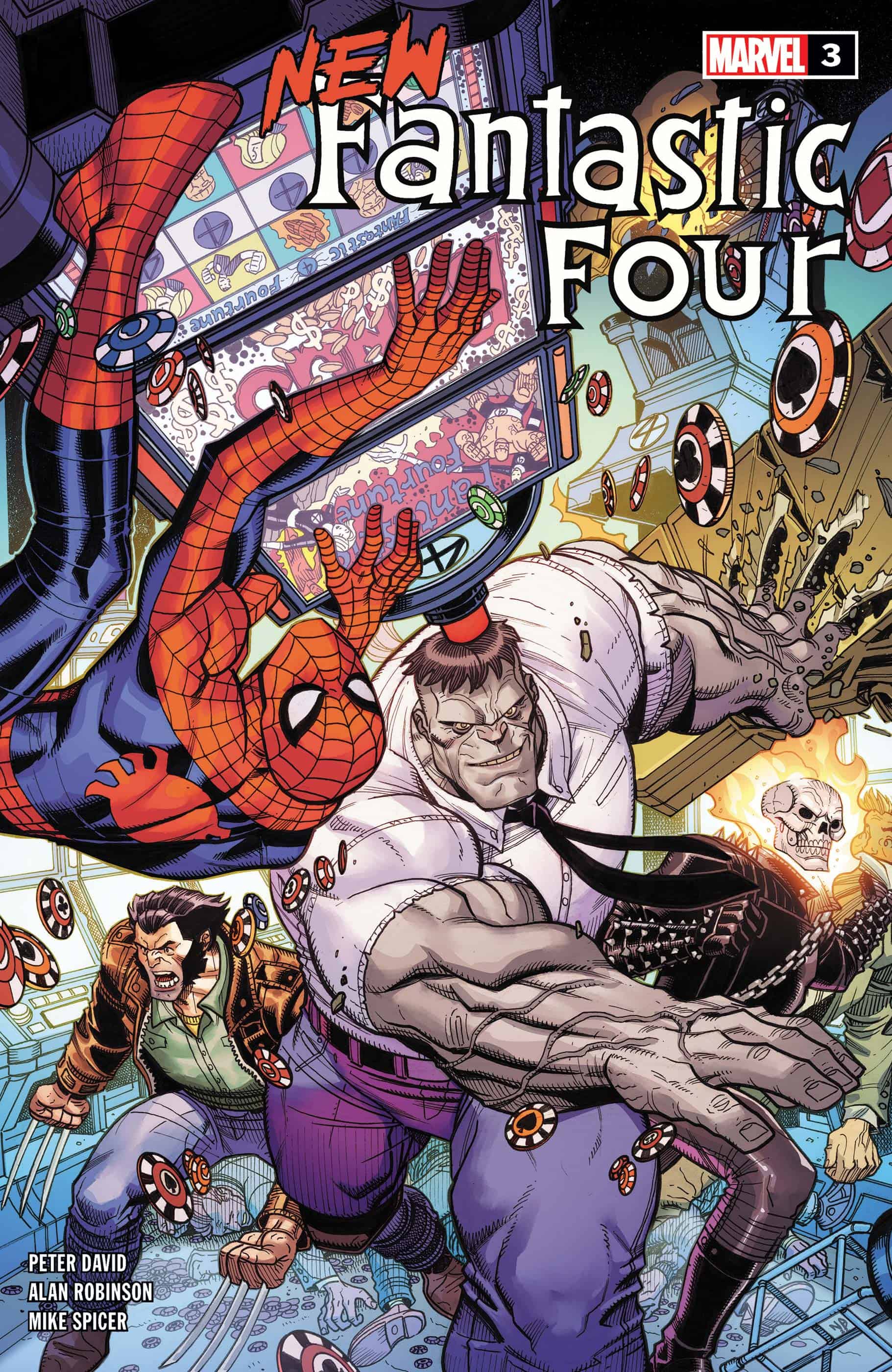 Asmodeus has inflicted his demonic influence across Las Vegas. The New Fantastic Four are in disarray. Ghost Rider is Missing and Wolverine is off the deep end leaving Spiderman and Hulk to handle the city and its demons.

The unlikely squad of heroes is left in a chaotic swirl of uncertainty in Las Vegas. Amadeus thinks he’s won with kidnapping Ghost Rider and sicking his demons, and literally unleashing Hell on Las Vegas. Spiderman, Wolverine, and Hulk are searching for Ghost Rider and are interrupted by a friend. Or is it a foe? I personally wouldn’t have thought that two Avengers, an X-Man, and the devil’s bounty hunter would make a good team. I love each character for their own personal powers and unique stories. However, I just don’t see Spiderman and Ghost Rider chilling at headquarters drinking beers after a fight.

The story takes place in Vegas, Sin City, and a lot is going on. If you don’t pay attention, you will be lost. I am not sure the clarity of the story comes across well to readers. Concepts and ideas are there, but the execution left much to be desired. Following each character to find out what is happening. I am lost with Wolverine and Hulk for a good portion of the book. The only part that made sense revolved around Ghost Rider being taken by Amadeus.

The New Fantastic Four team did have a lot of vibrant artwork and did highlight each character in their element. I am just not sure it was enough to make this book a slam dunk. I enjoy the cover, both the original and the variant. Both covers encompass what the look of the unseemly four heroes together should look like. Spiderman, Wolverine, Hulk, and Ghost Rider all are fantastic individually but will they be able to make the cut to hold the title of The New Fantastic Four? That remains to be seen.

As a long-time Fantastic Four fan myself, I believe more needs to be done to hone in and focus on the team aspect of the new team. Peter David has some work to do for his readers. I look forward to the next issue to see how the team moves forward in its story.

With four incredible INDIVIDUAL heroes, it's going to take a lot to show readers they make the ideal team for The New Fantastic Four. Ghost Rider missing and Wolverine on the lam, Spiderman is left with Hulk to clean up the city and deal with another problem. I am not sure this is the best group to put together but I will say they have potential to be something more.