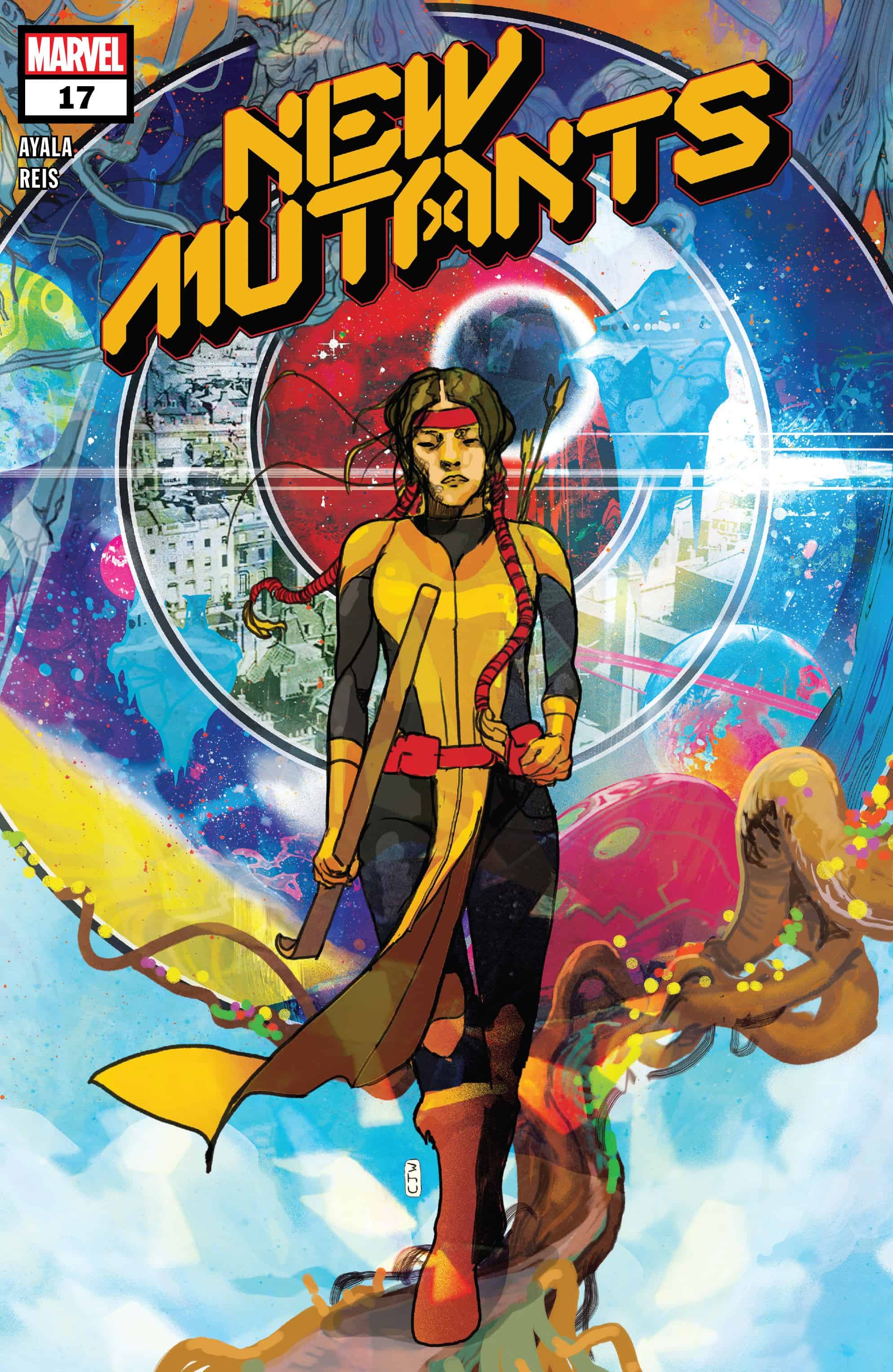 As Karma and Mirage continue their quest for the missing mutant Josh, Rahne is consoled from the most unlikely of quarters, although we have seen this to a lesser degree with the younglings. And the younger kids have some issues of their own with powers going hinky and Gabby and Anole have a huge disagreement.

CHARACTERS: I’m not loving this constant back biting between the kids and can only hope it’s some fallout of mixing up with Amahl Farouk. Whatever it is Vita Ayala is really keeping me guessing here, and skillfully skirting the issue as to what is actually the long game. And while in the past I have lamented the lack of our lizard boy this is NOT what I wanted to see from Anole. How can he stand there and criticize Honey Badger, claiming she doesn’t know his pain? The girl has full on facial scarring and cannot escape the reminder she is different, just as much as him, in fact more so given her outsider status as a clone on Krakoa. How dare you Anole. It seems a little out of character here for him, something is definitely off kilter. However Jonathan is perfect here, defending his girl. I’m sure Shadow King is stirring the pot, but why is still a mystery. Is he feeding on the misery, or just playing along out of boredom?

And speaking of which, here we go again with his constant attempts to curry favor with those who are having emotional dilemmas. I am still not entirely convinced he’s not playing some nefarious game here, but the longer it goes on the more undecided I become. At first I was sure of it but if he thinks he can work Rahne into his plans he clearly has a lot of hubris, so I did almost read this as if he means what he says. But if he IS up to something then woe betide him when the other senior New Mutants catch him messing with one of their own. And if they suddenly only pay attention when it affects Rahne, the younger kids will also have something to say when it all comes to light and why they were neglectful in catching it sooner. This is something the New Mutants themselves had always criticized the X-Men for, from “Inferno” to “X-Tinction Agenda.” I can only imagine the resulting drama as it all comes falling down and it’s revealed they only paid attention when it affected them. But with their attentions being diverted to so many other issues they can surely be forgiven. 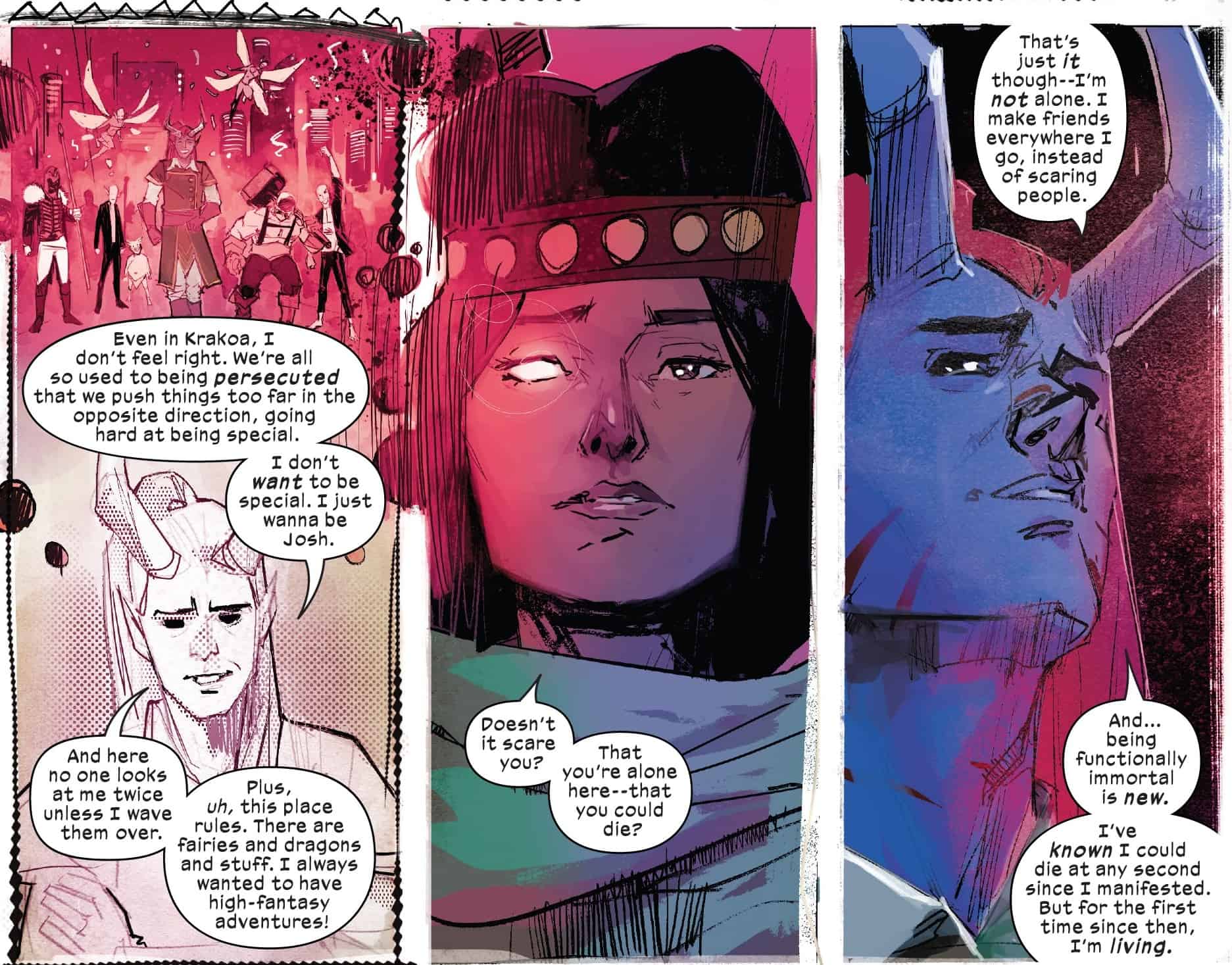 STORY: And the final outcome of the Quixotic trip to Otherworld is kind of satisfying, not least seeing Karma’s power used offensively, as it rarely gets an outing of this kind. Also as the duo relinquish control and allow Josh to stay where he is, his assertion that to be immortal isn’t something he’s bothered about is a similar echo to Way of X, which was interesting and I think it’s had more to say about Otherworld than even Excalibur. This is a huge gamble in terms of the Krakoan system, but also a perfect example of Dani’s leadership ability and insight and ability to see the potential in having an outsider in the unknown territory. And as a huge fan of Roma of old I am actually liking this revision and it seems the more she has changed, essentially it is still our enigmatic and mysterious woman, albeit now somewhat more mischievous, I’m intrigued to find out what her favor will be. And the revelation that Dani’s psychic manifestation of the rabbit was actually fed by Shan’s memories of her brother Tran are somewhat ingenious, blending in the Asian mythical figure perfectly. 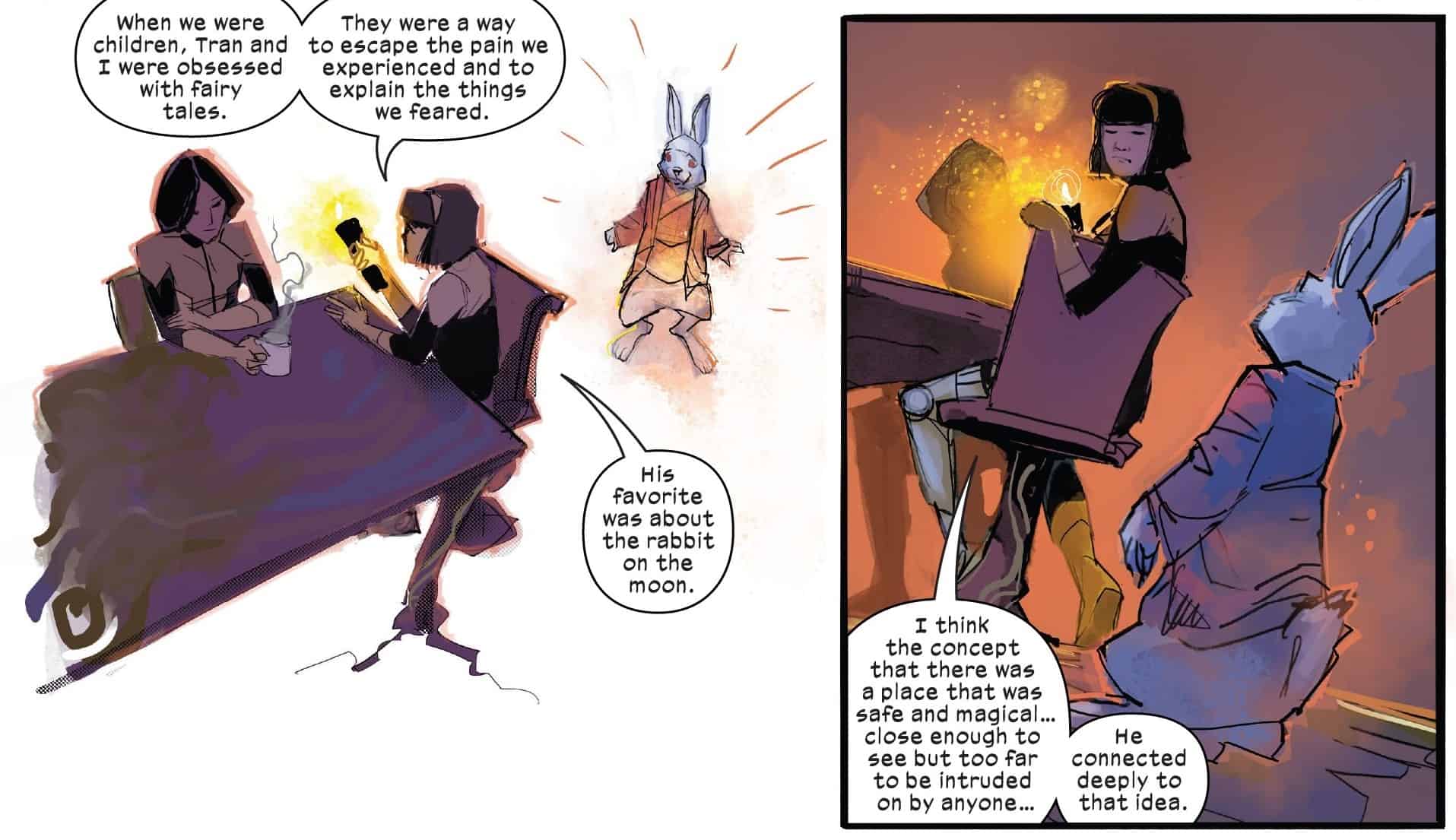 ART: And in that final scene there is some tenderness between the two girls and the visual interpretation is both poignant and heart-warming. Even as Shan persuades her to do the unthinkable. As always Rod Reis revels in the ability to give each scene its own voice. Otherworld has an ambiance of… otherworldliness. First with the depiction of Dani’s power to cast illusions to bewilder inhabitants of a place where outlandishness is the norm, then his skill in drawing the eye to the drama with watered down backgrounds, I found the whole thing perfectly in keeping. And making the Dungeons and Dragons style quest his playground I warmed to the premise even more than last issue. 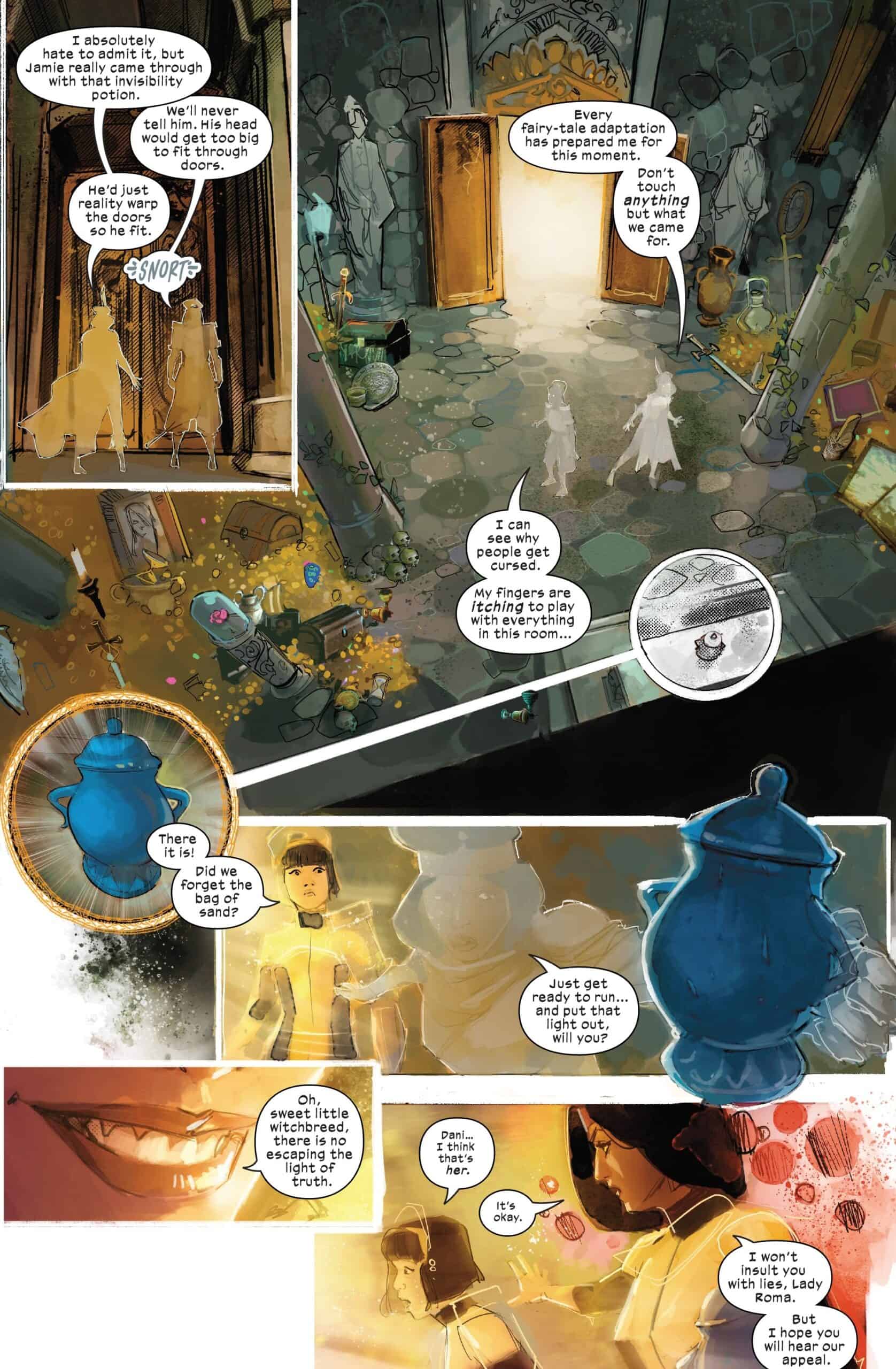 Overall the sequential nature of the story could have been disjointed, but the art and the main story in Otherworld kept it neat, and wasn’t overpowering to the extent it sacrificed the other underlying developments on Krakoa. Each thread was given enough of a chance to unravel and keep us guessing as to where it is all going. And I hope whatever comes from Shan’s request for the Crucible doesn’t make Dani too hypocritical when it comes to Cosmar’s request for the same honor. And another stunning cover from Christian Ward, showing Dani in full spirit walk mode.

I’m loving the body politic points being raised here. This dissatisfaction of the kids is beginning to be a familiar refrain in this title and it has a lot of potential, I just hope it doesn’t become too belabored. But I’m really keen to find out what Shadow King is playing at. Keep it coming gang, this is one of my favorite X-titles of late.