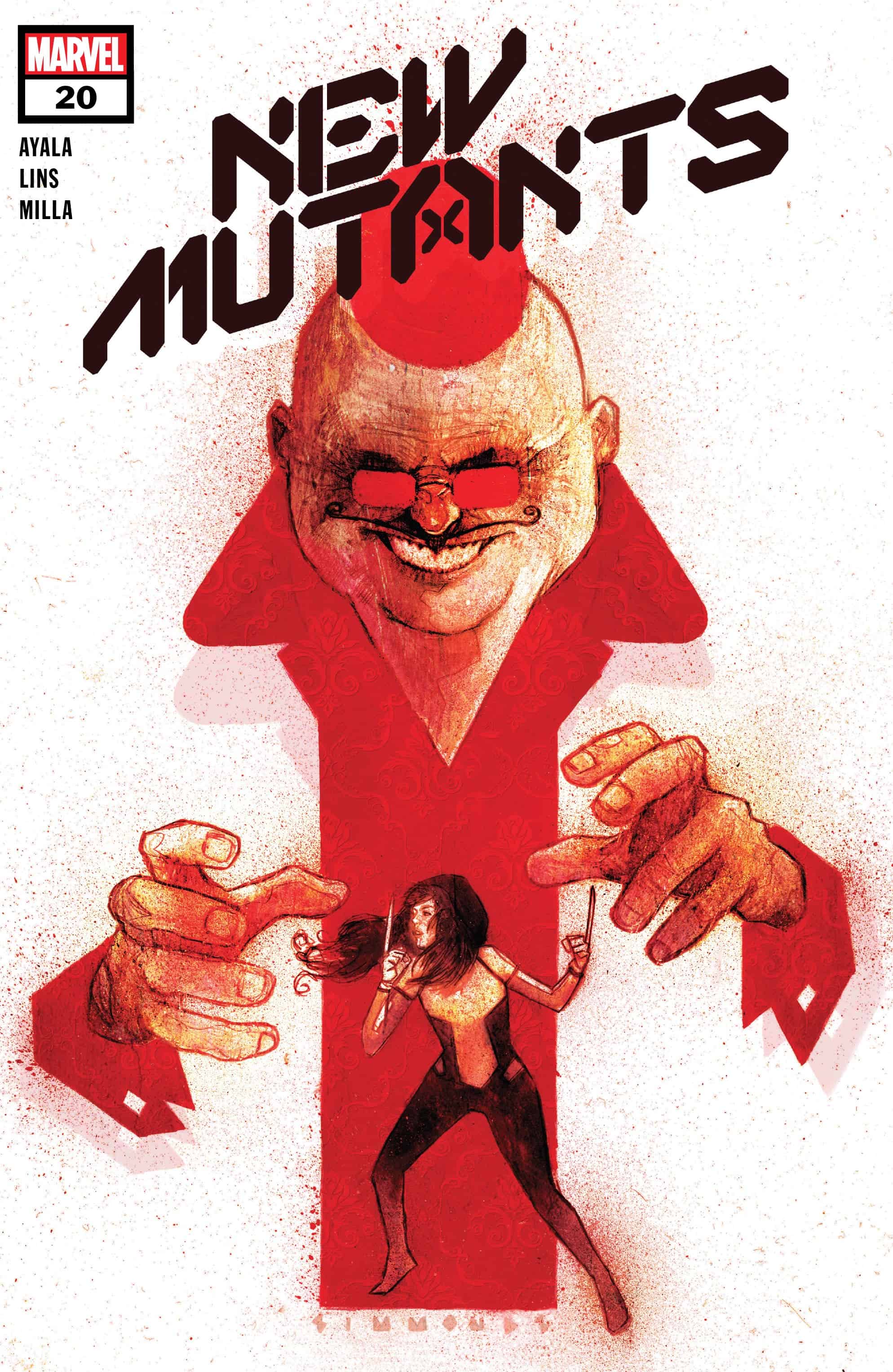 While Warpath and Magik are sent in a non combative role on a mission of damage control the afterparty finds the kids playing Weekend at Bernie’s….what could possibly go wrong? 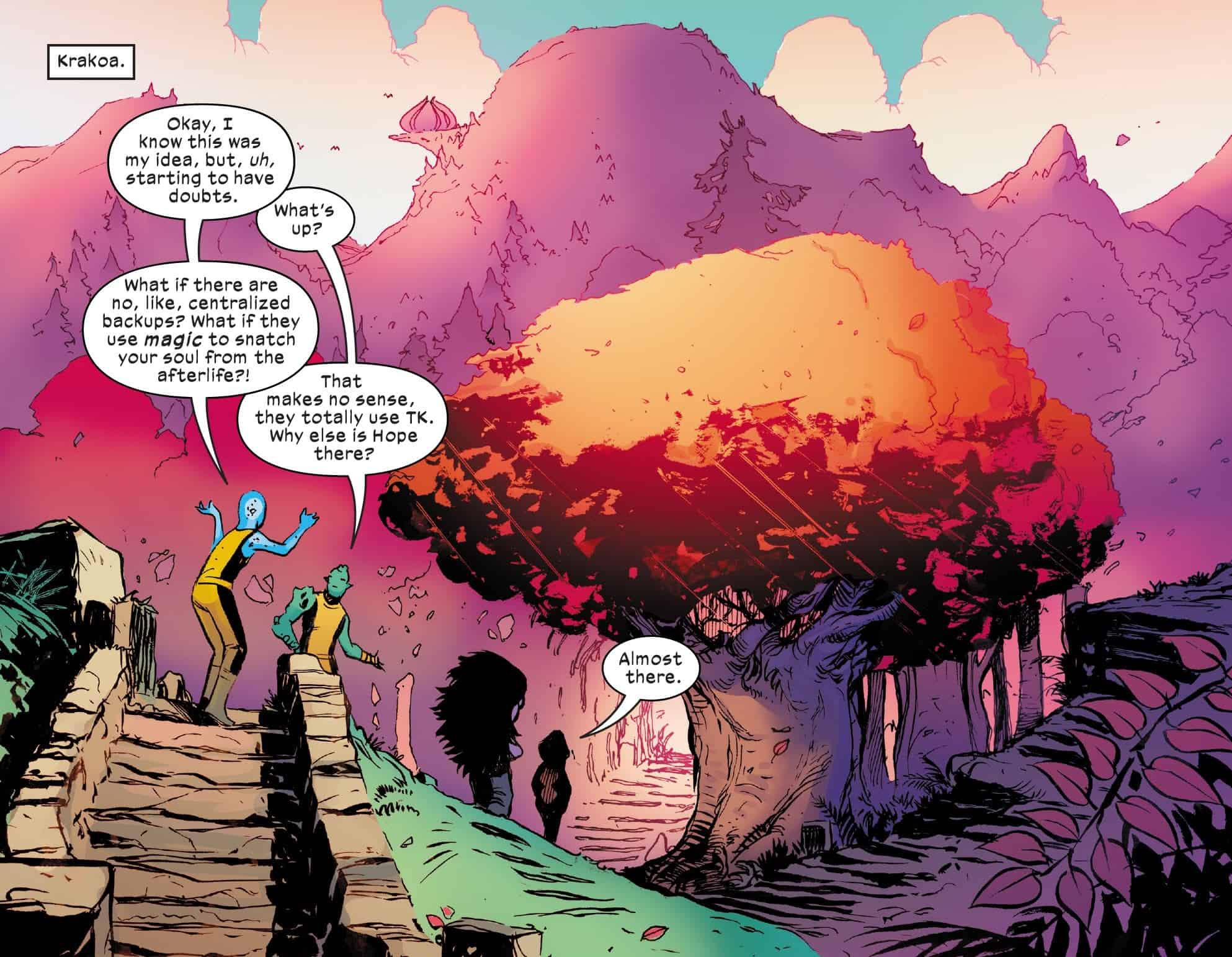 STORY: Vita Ayala continues to impress me in the way he manages to keep so many plates spinning. Guest appearances from other characters such as Daken Elixir and Tempus, involving them in the plot in an organic way. As well as carrying on two larger main storylines of the events in Tristan de Cunha and the quest to resurrect Gabby. Then on top of this the Shadow King plot bubbling in the background with Rahne continuing to be underhand about her role in things and continuing to deny things, first to Dani and now Karma. Then seeing the kids while with Elixir she later catches up to them because she knows Scout should not be with them. And the exchange between her and Farouk has confirmed to me she has made a deal with him to get her son back and that’s why she isn’t off doing something about it. 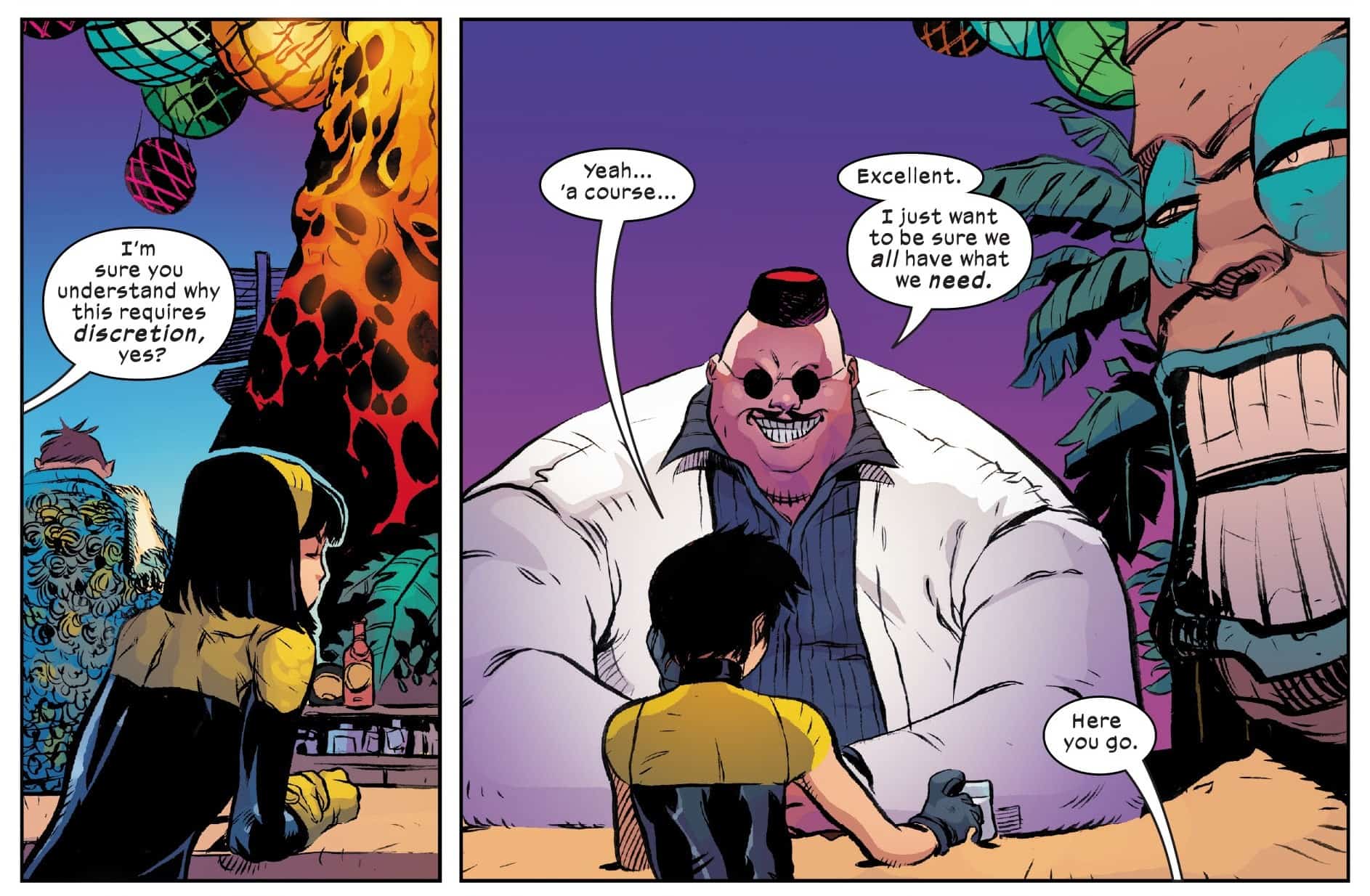 CHARACTERS: I loved the interplay in Tristan de Cunha and the plot twist that for once a village is actively protecting their new mutant, and it’s the heroes cast in the role of perceived bad guy/heavy. This is an underused plot device (X4 miniseries not withstanding) that would actually be more realistic and is quite refreshing. And more of the synergy effect with Magik and Kappa, not a major display but still insightful to see. And major kudos to Warpath for defusing the situation and recognising the key to resolution. He may be a 7 foot powerhouse but he has the compassion to balance it, reminiscent of Colossus at his best. And a treat to see Jimmy in action at last and in uniform alongside Magik as team leaders, with him telling the new kid that using his TK isn’t cheating. A light hearted touch that balanced the overall drama. 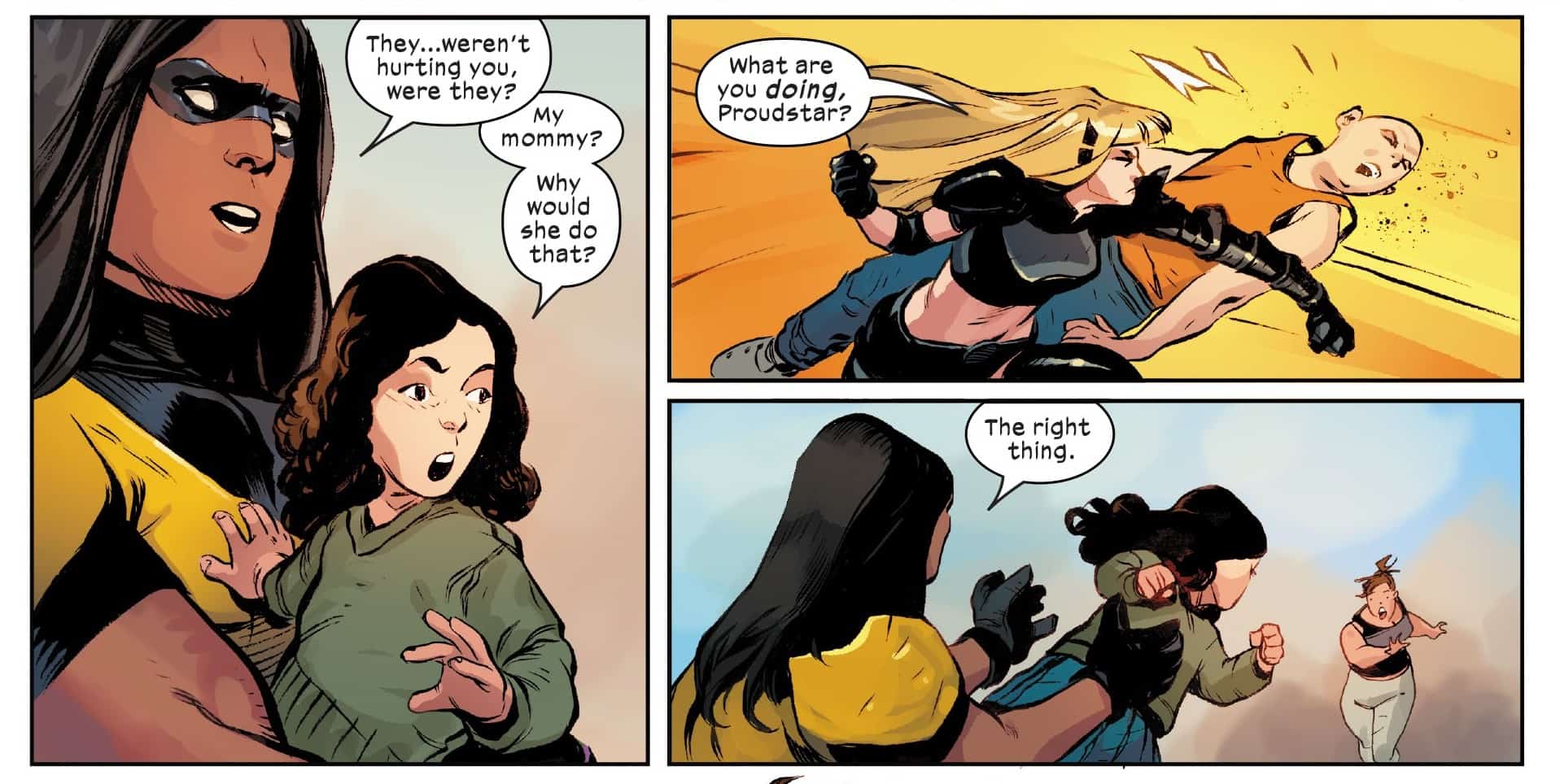 I’m having a slight problem in the way Elixir calls them kiddos when Anole is essentially a peer, though you wouldn’t think so to look at him, de-aged…yet running the bar over in Marvel Voices: Pride. Plus is it just me that thinks it’s time he dealt with the loss of Santo? Maybe this is the key to his regression into the under confident snippy teen. Also the way Anole is being portrayed still. After the way he treated Gabby a couple issues ago, now we have him still being a general naysayer. First rejecting the suggestion of murder (denial is not a river in Egypt Vic) to complaining they have lost Scout because the adults are short sighted for not allowing clones to be resurrected…yet more denial.

I’ve said before I had sympathy for Cosmar, but this has now worn thin last issue and this with her attitude. Her deformity is indirectly her own doing and if she gets changed physically in the Crucible there is still the issue of her power doing it’s thing and she will just revert again. She needs control…on an island full of mutants who can help, she wants to be impatient and take the quick route. Though this is the remit of youth, it’s not the long term solution. And No-Girl, who has never expressed a dissatisfaction about her state is now griping about not having a body and insulted with her name? Although this voicing of dissent is actually not tone deaf to the emotional aspect of her condition, it is new. This at least I am not having a problem with. But her possessing Gabby and taking her own ire out on Akihiro and masking it as Gabby’s issue was to me a very low blow.

ART: Again the data page manages to have a little bit of charm with the reference to Santo. And the overall art was fresh in the way the characters are all fully expressive emotionally, perfectly balancing the script. The visuals are completely different from what we have been used to in the recent past, and I see a lot of potential in the depictions and I am fully on board with what Alex Lins is doing and the colours of Matt Milla are the perfect complement. And the page where the kids pay homage to Scout was heart wrenching…I hope that it’s not going to be a Eulogy. Keep it up guys you are doing a stellar job. With yet another stunner of a cover from Martin Simmonds showing Scout in peril at the hands of the undoubtedly circumspect Shadow King. A definite pot boiler, with lots going on and exceptional characterisation…even those acting badly.

Such a low key cliffhanger, compared to last issue, but it holds the suspense perfectly and makes me excited to see the confrontation of Rahne, where I’m sure all the things hiding in the shadows will be brought to light...and then Gabby’s fate will be resolved...I hope