New Mutants #23: A SHADOW OF THY FORMER SELF 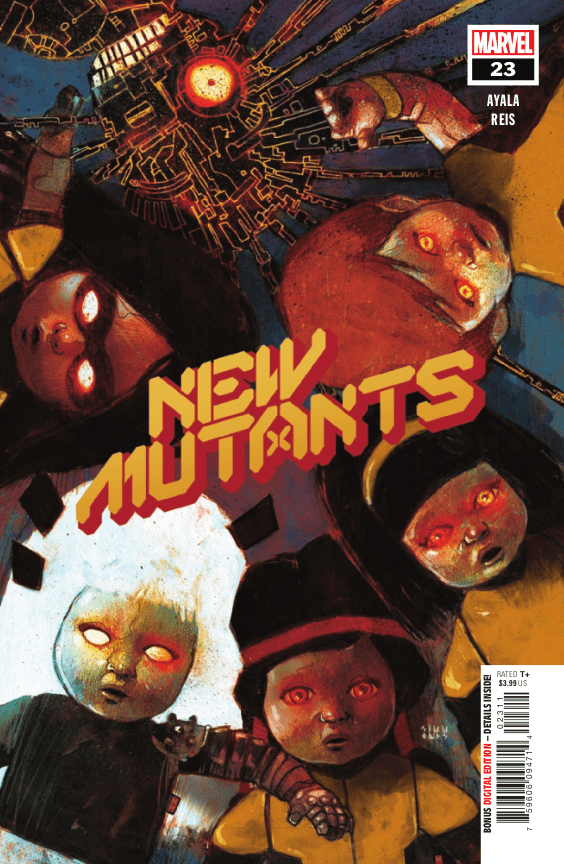 As the junior mutants go into the lions den to rescue the seniors we find many differences are brought to the surface and the old school learn some lessons from the younglings. Also as long standing loyalties and friendships are tested, one unhealthy relationship may be forced to come to an end. 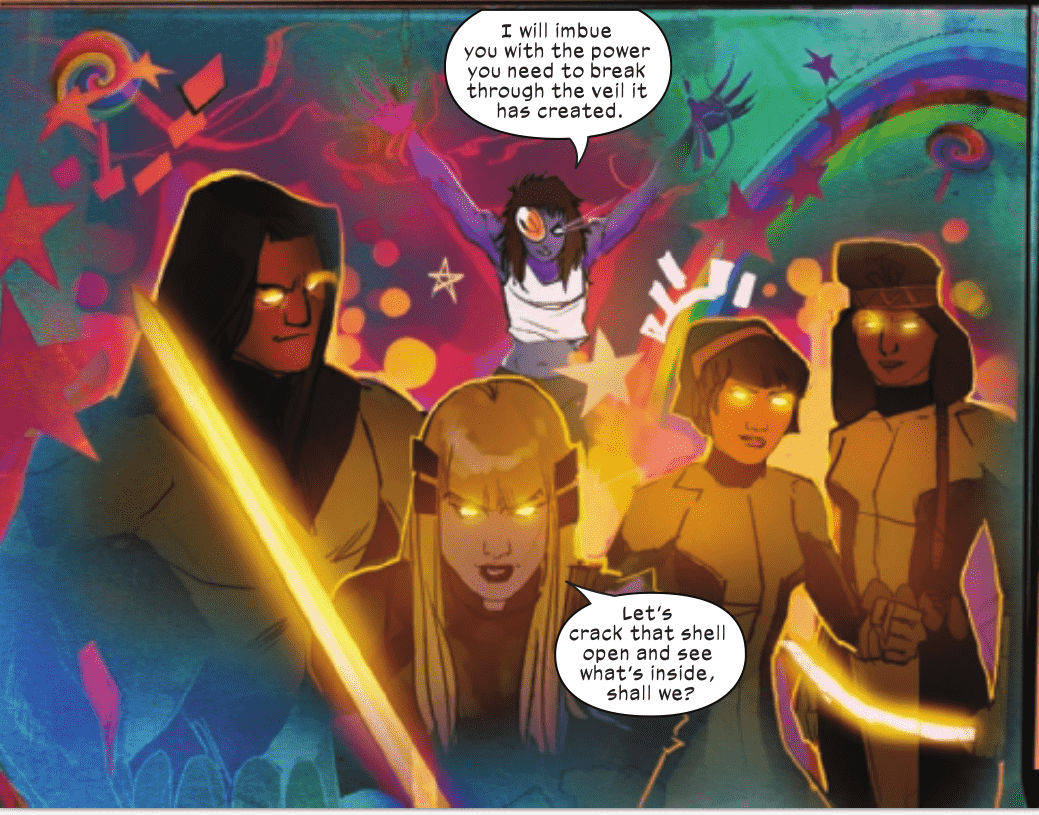 Right from the start it’s clear the visuals are a huge feature this issue, given the nature of the story and the staging area for the whole event. And it really goes for it in a big way. The ‘non-Euclidean space’ versions of the younger mutants was for me also very telling. All seem to have re imagined themselves into idealised versions of themselves, with the exception of Gabby who seemed unchanged. This may be because she has only just been resurrected, but I like to think it’s because she has a well rounded self image. The most telling is No-Girl, who Vita Ayala has again made the focus in terms of changing perceptions. After her possession of Gabby in previous issues, we see not one but two dramatic changes which may challenge the way people see her in the future. I think there will be more to come for her when the fallout of this is resolved.

And then from physical changes we are treated to the trippy landscape that has become something of a signature piece of this title, from Cosmars introduction arc to Dani and Karma’s Otherworld quest. Upon entering the lair of the Shadow King Rod Reis delivers, with the sheer MC Escher screwball nature and edge of the scene shadow beings. Which is also well and truly in keeping with everything we know about Amahl and Shadow King and their relationship, as it has come under the microscope since this series began. Also as the kids approach the focus of the drama, the landscape reminded me of the vastly underrated JLo movie The Cell. As did the astral fusion creation, as resplendent and heroic an entrance as was depicted by the heroine of the movie herself. A story which actually parallels the issue to some extent, as it deals with someone entering the mind of a dangerous individual to come face to face with a child that isn’t all they seem. 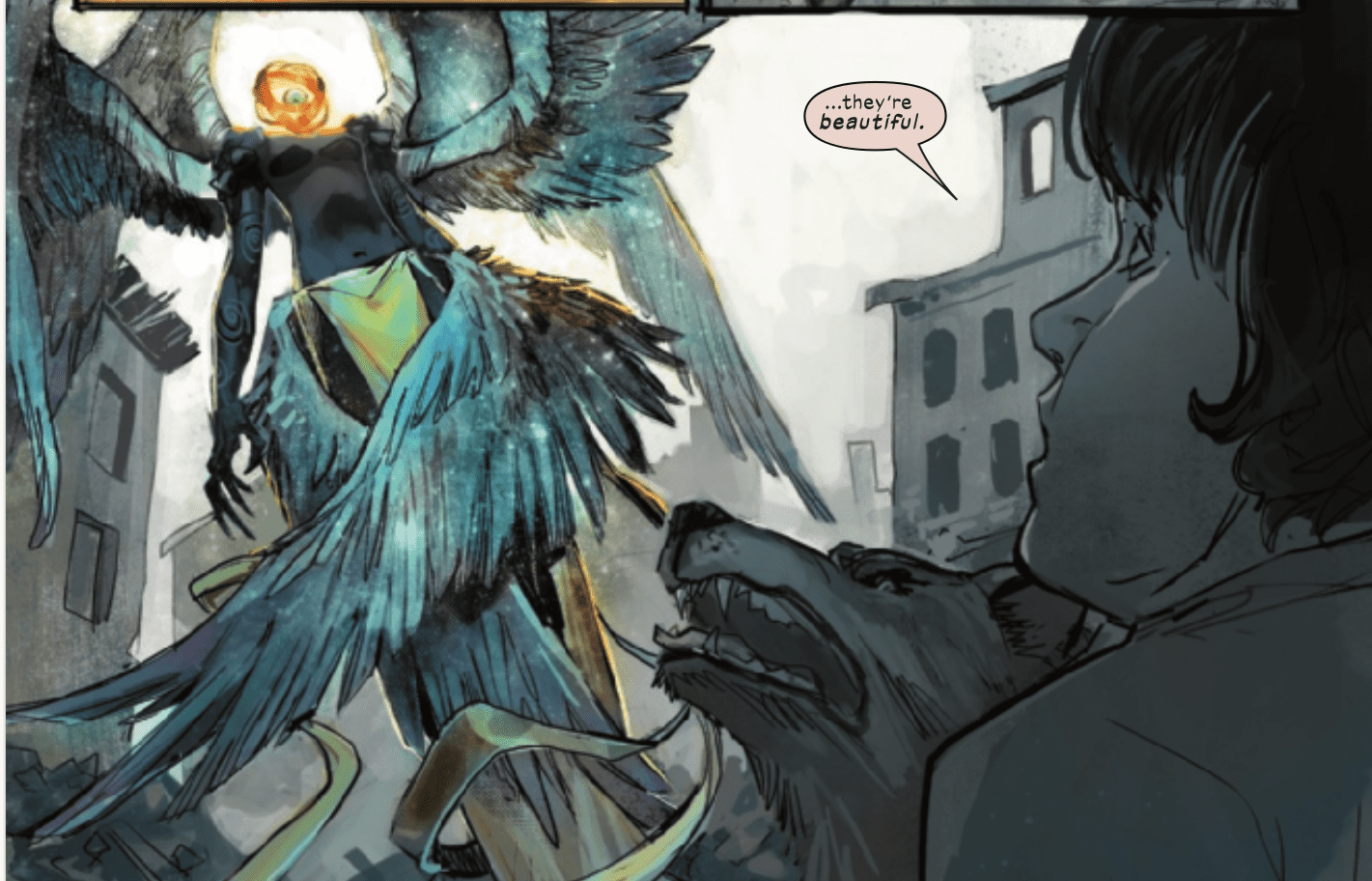 And then later in the battle the synergy training we’ve seen in past issues finally pays off in a spectacular way. Though I think we can all agree the return of the five-into-one aspect of Rahne’s powers was not something needed to be seen again. I can only hope it was something brought about just because of the nature of the battle and not something to be repeated. A more welcome addition though is the Ubermutant upgrade for all the younger kids, though I’m not sure Rain Boy could be classed as an improvement, and Honey Badger as …a badger? Again maybe perfection cannot be improved upon…that’s my theory and I’m running with it. Though No-Girl again gets some major retooling and Anole goes Godzilla mode, which I did not hate. 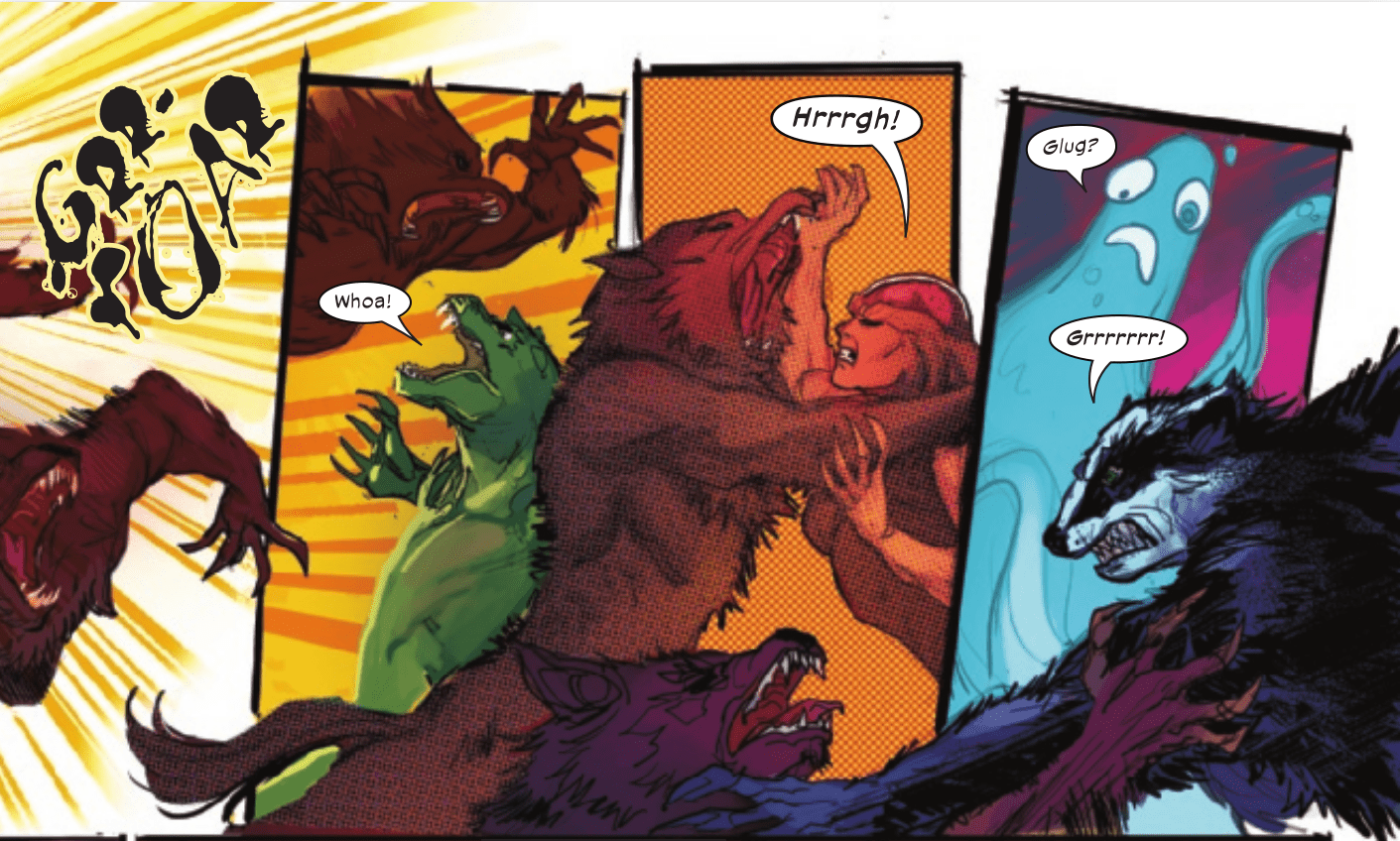 Not to mention the nightmare versions of the New Mutants that Rahne is forced to see in order to manipulate her later. Which made for a perfectly plausible reason for her to go off mission and change her allegiance for a short time. And finally though the art goes all out this issue the writing isn’t left standing. As we find even in the heat of battle each player in the gathered group manage to have something to say in terms of what is going on. And each exchange is well and truly on the nose, with those having their say being in keeping with the nature of the characters in question. And not only do they manage to get to the heart of the problem and make a decision based on the best intentions of the group as a whole, but there is a return to the nature of the relationship of Rahne and Dani, which has a major part to play in the resolution of the plot. 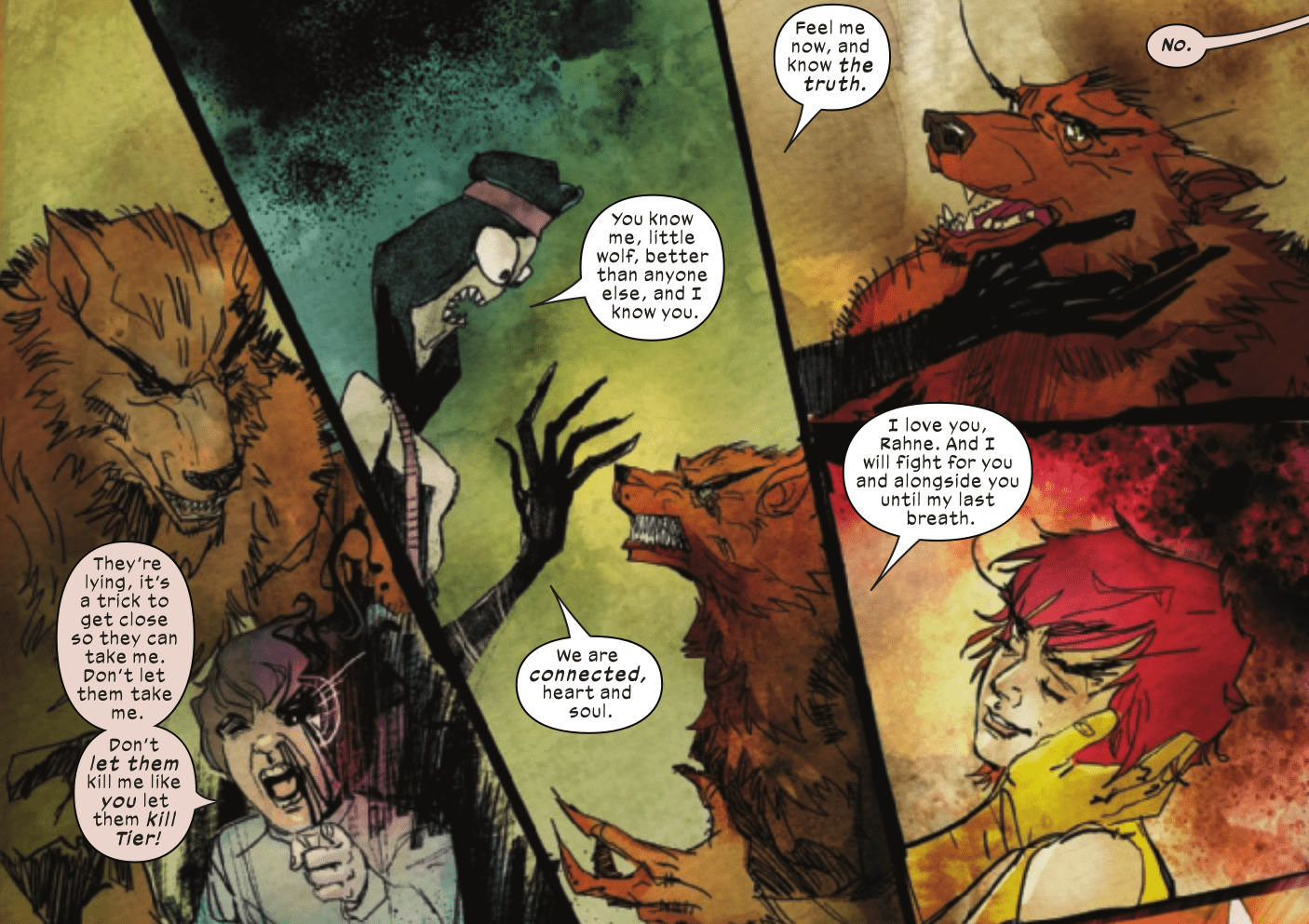 Even the first text page has a huge part to play in informing of the struggle going on within the Shadow Kings own mind. A relationship that hasn’t been explored much by many writers before, even since the creation of the character. And the Amahl/Shadow King inner monologue now gives me the indication that the real SK has actually possibly been dead for a while, something I hadn’t even considered before. The version we see here seems to be a shadow Shadow King, possibly even something created by Amahl himself. Seemingly in his fear of being alone again, as he was before the alien presence took possession of him, he may have created an aspect of his own inner demon to mask his own fear of being alone. And also the second text page brings to light the difference between the two groups, which again creates the impetus and informs the whole story. Pitching the seasoned voice of bitter experience against that of youthful exuberance and hope. All of which creates the perfect staging ground for the struggle that follows as the two groups face off against the Shadow King. 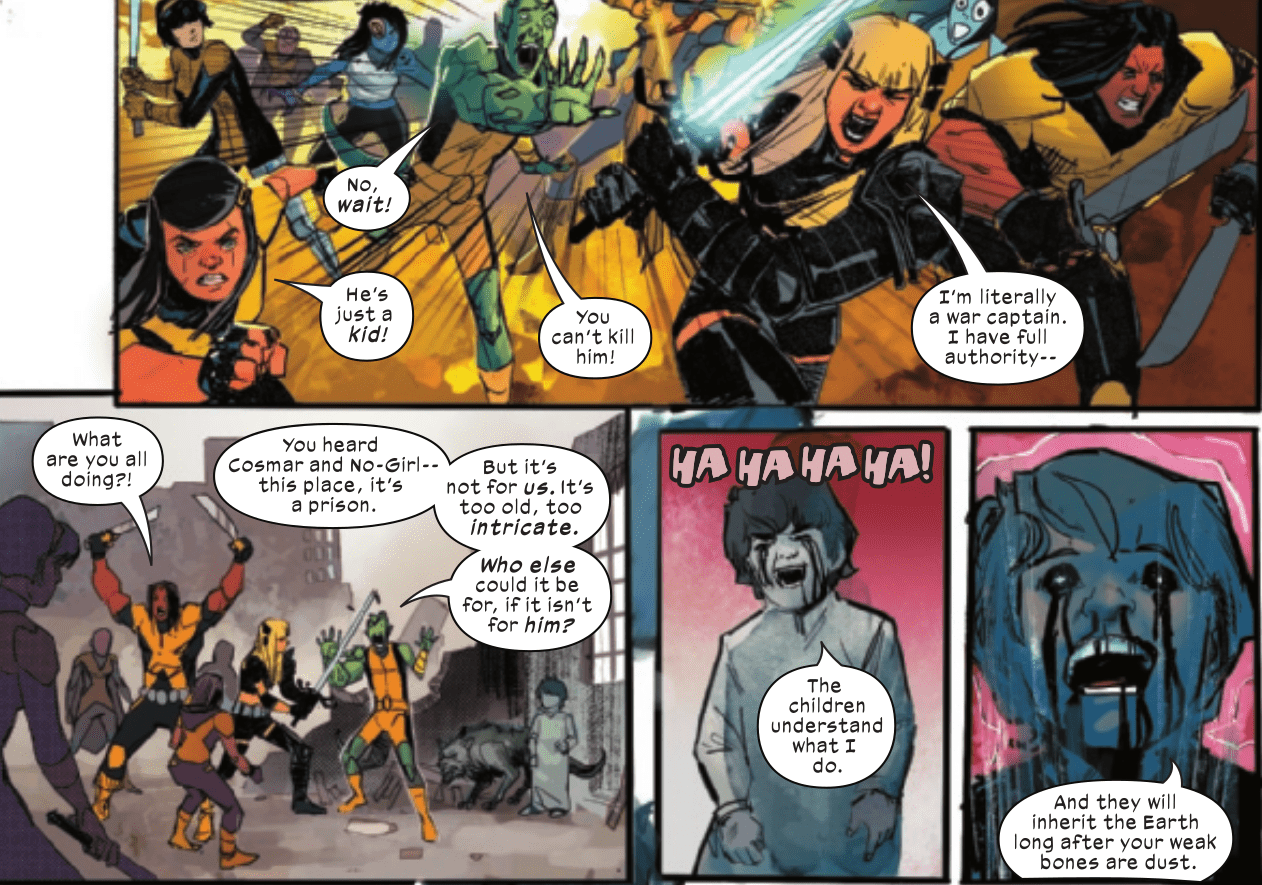 My only concern is as after the dynamic way that events unfolded this issue the conclusion maybe needed a tiny bit more of a pay-off… despite the cathartic and satisfying visual at the finale. I’m hoping maybe this comes next issue. Other than that all I have to say is that once again the writing and art marry together perfectly to create a well balanced and fully engaging story, that gives everyone involved a fair crack of the whip and allows for the reader to be drawn right into the story and feel anything could happen.

The exciting events that unfolded this issue and insightful dialogue really made me feel in no uncertain terms this is one of the best X-books in terms of well balanced plot, characterisation and dramatic artistic interpretation. To be drawn into a psychotropic reality such as this is no easy task. And to do it in such an individual and imaginative way is never an easy feat to pull off.

New Mutants # 23 A SHADOW OF THY FORMER SELF