New Mutants #24 Free From the Shadows of the Past 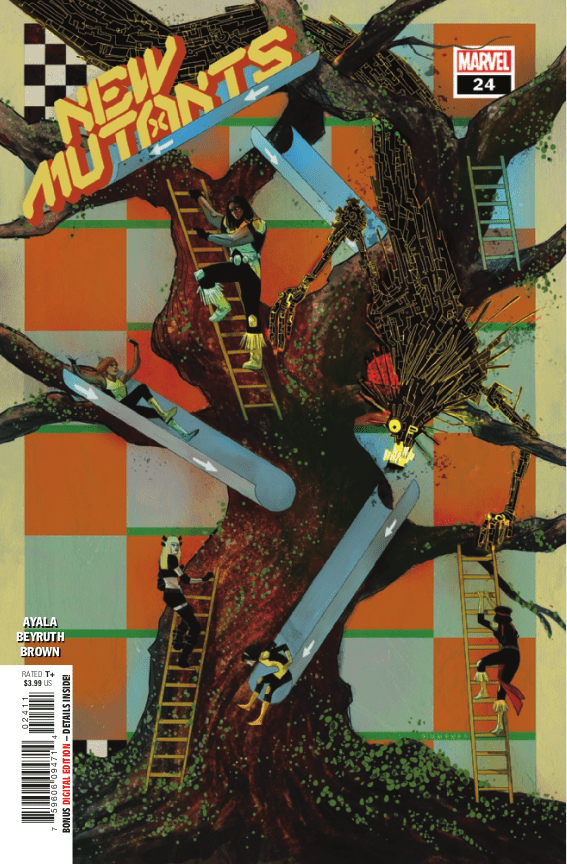 As the Lost Club come to terms with recent events past crimes are forgiven and a long overdue reunion takes place. And as the Wolveteens get together for some restoration of familial bonds and Madelyne Pryor drowns her sorrows there may be more redemption on the cards. 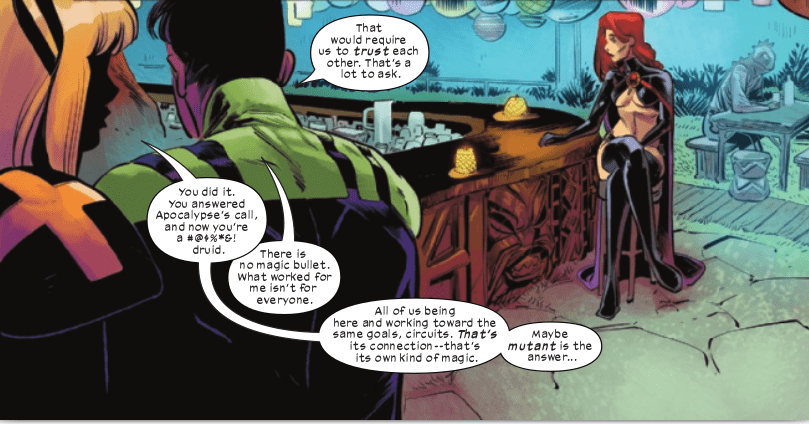 A lot of bridge building this issue, and I don’t mean gap filling between story arcs, although that is essentially what this issue is. Though to call it a filler issue is hugely downplaying the importance of some of the heavy scenes we are party to here and Vita Ayala does what they always do so well and drag me right into the swirling vortex of deep emotional undercurrents. First Dani acknowledges she let down not only Rahne but also Cosmar. Then Cosmar finally gets the chance to see her full potential. Magik reaches out to Maddy. Gabby and the Snkikterhood reunite. No Girl becomes Cerebella, using the physical appearance of the girl we finally saw come to life in the last arc…can I just say the resemblance to Mindblast of the Femme Fatales is astounding…wonder if there will come a day for a familial revelation? No, let’s not go there. 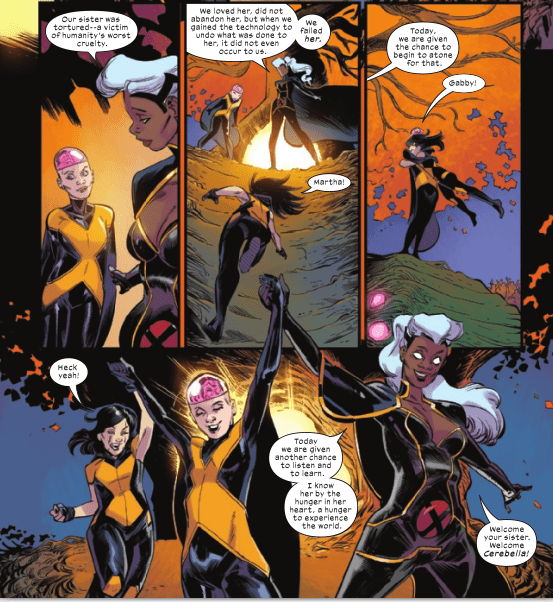 We also see Amahl getting a shot at redemption, with a nod also to his future growth and possible new position within the Legion of X book coming April 20th, although Xian ensures he doesn’t get off too lightly. And I can’t help feel a sense of joy at Karma finally being given an opportunity to have a relationship. The last time it was even hinted that there as a significant other was at the Burning Man festival many years ago in X-Force #75, when she first came out. But the biggest and most important moment for me is the reunion between James and John Proudstar as he finally gets his big brother back. Though I was a little astounded to see he’s actually taller than John. Never thought that would be the case, but there it is. And it is not a bad thing, just a physical reminder he has grown from under the shadow of his older brother. 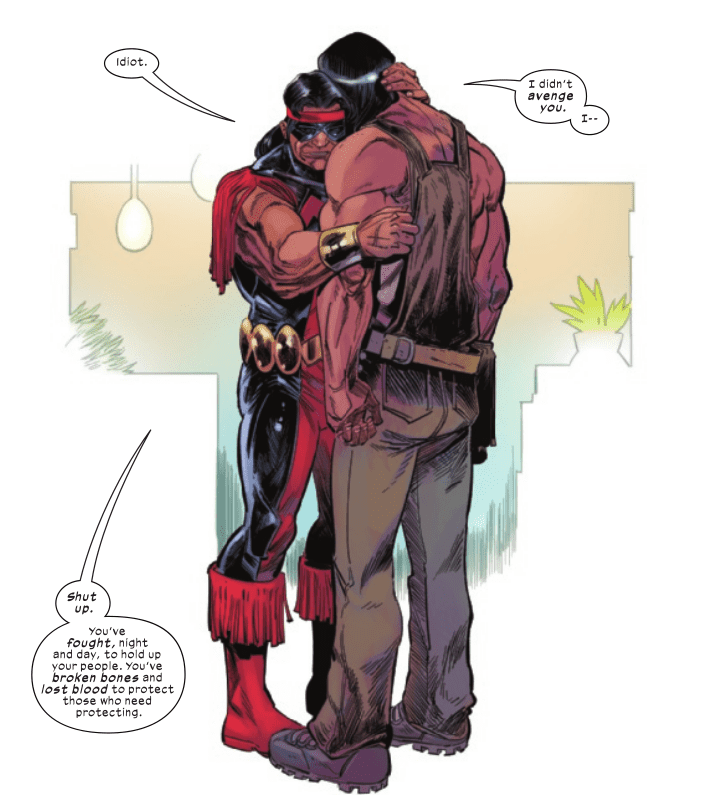 As for the art, I have to admit I didn’t immediately warm to the new style, but once the story got fully underway I felt it started to grow on me. What at first seemed a little Walt Disney and cartoony soon became something more soulful and expressive, with an actual warm and welcoming feel. The drama was no longer in the mindfields of the Astral Plane, or Cosmar’s weird reality warp, which perfectly suited the previous art style. But now the drama lay in the in reflective between moments of still quiet contemplation and the heartfelt conversations going on between long lost brothers, long time antagonists and long term soulmates. 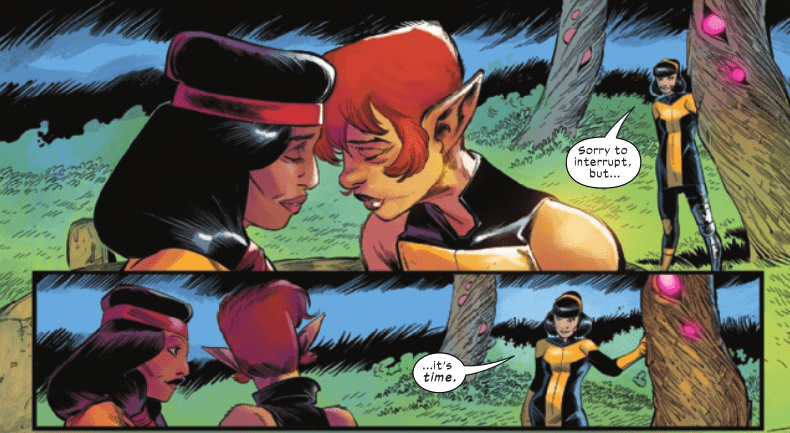 The image of Dani and Rahne could serve for me as the pinnacle of expressive visuals alone, even without the solitary Goblin Queen propping up the bar, or the Old New Mutants seeing Amahl Farouk through the gate. As such the dramatic art of previous issues was surplus to requirements and something more pensive and thought provoking was needed. The dialogue needed to be carried across with facial expressions that conveyed true emotional depth, not the dramatic flair and sweeping background scenery needed previously to amp up the drama. The art needed to describe the heavy atmosphere in the aftermath of all that has gone before and all that has been building for so long. And Danilo Beyruth, coupled with new colourist Dan Brown conveyed this to a solid finish. And the art allowed all of the different threads to weave together to give a voice to the real lead character in this issue, the deep emotional connection and rich history between each of the players. 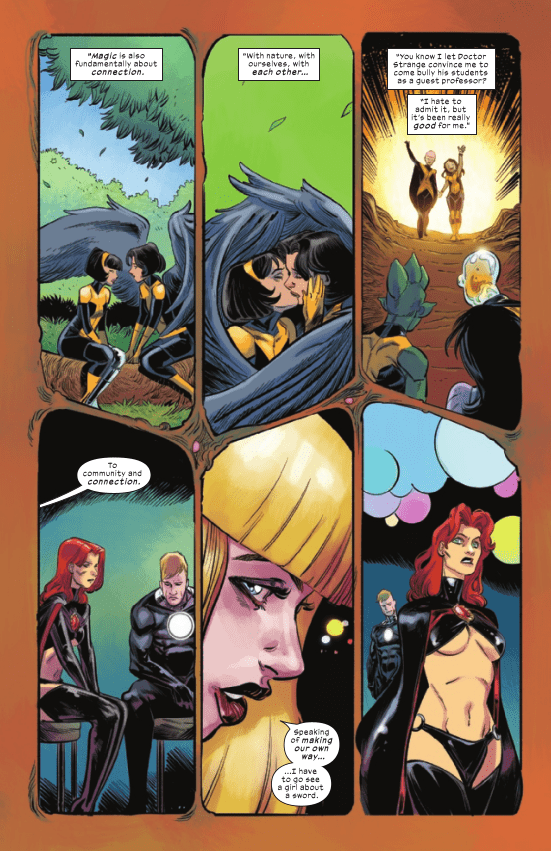 And the cover also serves as a metaphor for the whole issue, with the Chutes and Ladders imagery playing heavily into the twists and turns of the resolution of so many old wounds. From Karma and her facing Amahl for his sins, to James and John finally being in the same panel together alive and well. And it’s not often I pay attention to variant covers but I do believe the Peach Momoko variant to be something quite special and as resplendent as her Saturnyne variant for issue 13, showing Dani in a contemplative mood.

All in all there is so much to reward those who read this book and have been waiting for so many loose ends to be resolved and so many past indiscretions to be answered for, not to mention the art that carried a lot of the emotional baggage.

New Mutants #24 Free From the Shadows of the Past