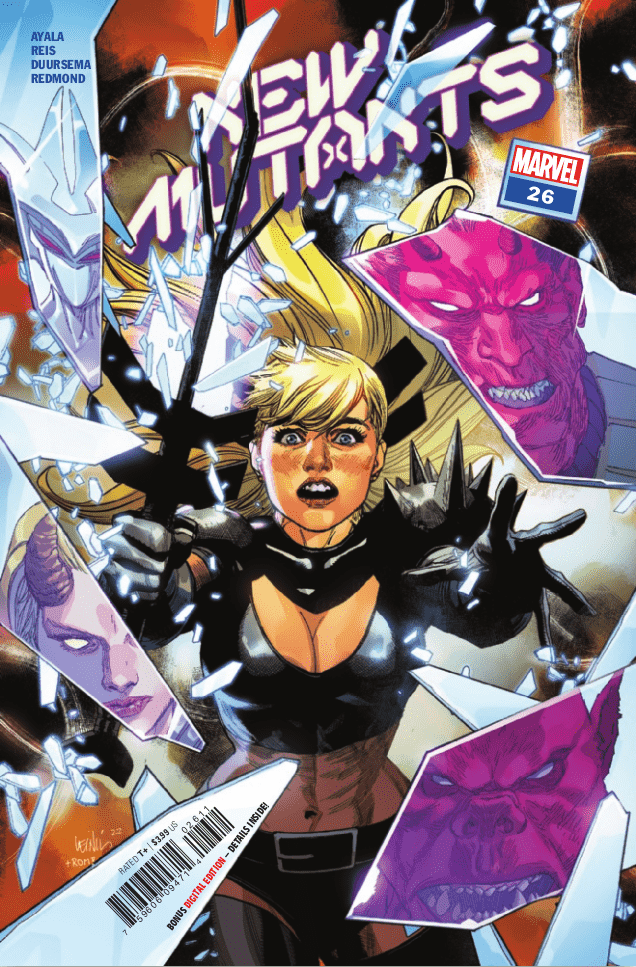 As Illyana and her compatriots struggle to find a way back to Krakoa without her Soulsword, they come across an embattled individual entrenched in a dark foreboding fortress. Discovering another version of Illyana, in a situation that mimicked that of her younger self many years ago, they retreat to her sanctuary to regroup and understand the threat they all face. Hearing of her older self and her long waged battle with dwindling allies, they finally decide enough is enough and confront S’ym and his army once and for all. Inspired by her younger self Old Lady Illyana makes a move even she didn’t expect and Illyana regains not only her determination, but also a new weapon. 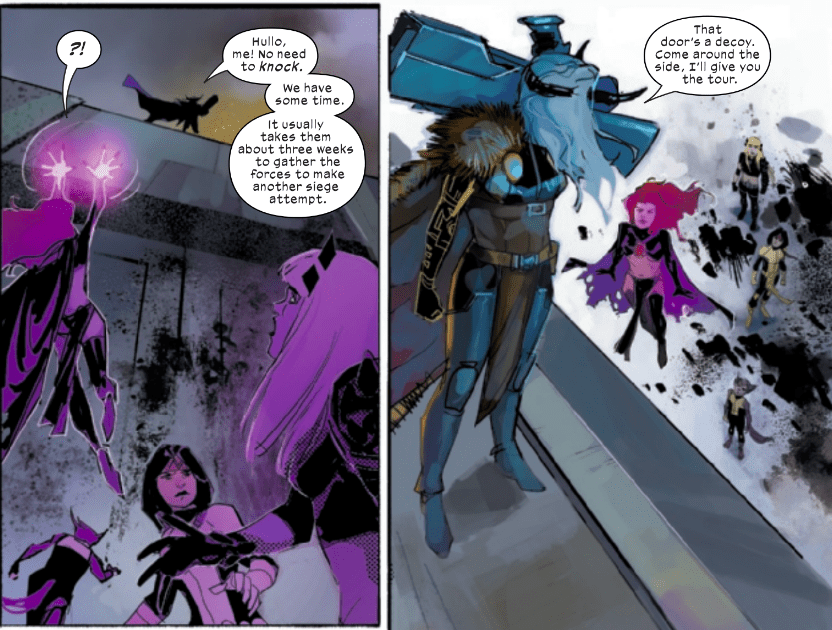 It warmed my black little heart this issue to see Illyounger interact with OldYana and watch them both gain something from the experience. Old her gained inner peace and redemption, while her young self realised she would always have that fire and determination to beat down S’ym no matter the cost. Too often Illyana has been sidestepped by previous writers as just being the taxi service. And even with being War Captain that doesn’t do much for personal development, but simply puts her in the middle of the action. I have enjoyed the occasional meltdown scene and her revelling in displays of attitude, but here Vita Ayala shows that there is more to her and that she can be used in a story with some pathos. And they write her with an authentic love for the character. My one tiniest gripe was that when Old Lady Illyana is introduced there wasn’t much of a visual or verbal reaction from the others to her appearance, but that’s just a minor quibble as they roll right into the drama. And no there wasn’t much said by the others, but Illyana has been waiting for her turn for so long, I just don’t care. Just this one shared moment alone with herself made up for that and was worth ten of her in battle with her soulsword. It shows that no matter what, she will always remain true to herself, whoever that self becomes. 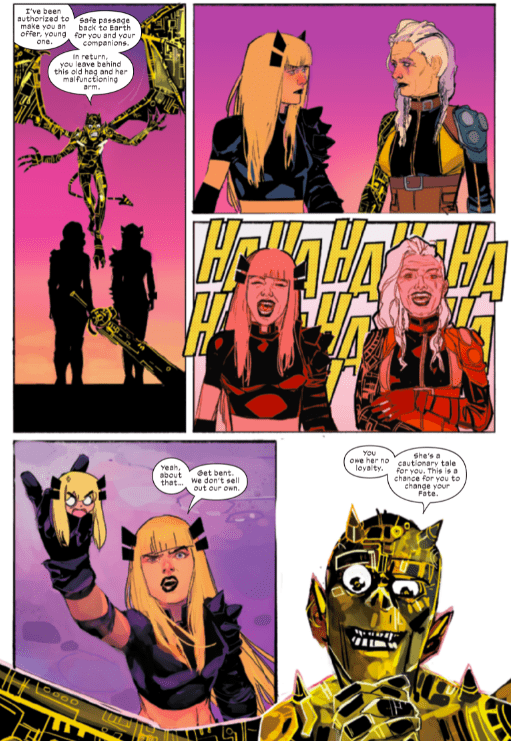 And this is where even Travis Lanham joins in the character building fun, adding humor to the text visuals. The gut busting laugh out loud is just perfectly capped with the added touch of a Yana emoji. Totally in keeping with who she is. Rod Reis also gets her, not just the sheer joy of both of them realising they are thinking the exact same thing, but also the unadulterated annoyance at the unruly demons having the temerity to think they could wear her/them down. And his depiction of the bleak surroundings again shows his skill in visualising unearthly landscapes. I can’t wait until we go to space again…hint hint!! The cold bunker-esue refuge is also a great outward expression of the situation she has been caught in all these years and without any backstory I can already feel how battle weary she has become. And then in contrast we get whisked back to the warmth of Krakoa, as Colossus searches for his Snowflake, all while she recounts her tragic dilemma. I wonder where that’s going? All of this draws me into the story and helps me realise the peril in Limbo is very real and the whole Sovereign Nation has no clue of the danger she faces, bathed in the warmth of the sun as they are. 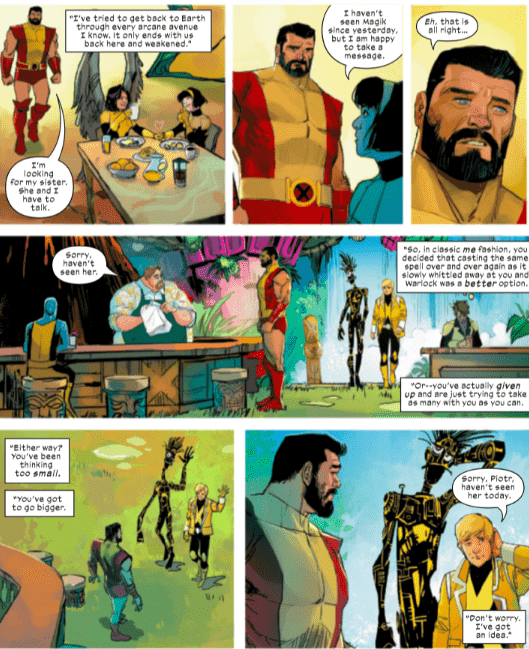 Rod also once again delivers on the fantasy role-play elements, with the picture book landscapes and fantastic monstrous enemies. These Goblin Exile fairybook fantasies are also fast becoming something I want to see much more of. Maybe in a Labyrinth/Dark Crystal style one shot, or another four issue mini? And we find not only is Old Lady Yana the Goblin Exile, but we also get a bit of potted history of her eventful life in Limbo, and the fate of Krakoa. And I love how it runs parallel to that of Illyana herself in terms of the Magik miniseries of the 80’s. Firstly she’s stranded alone after watching her friends picked off one by one, then she has to use creative means to form her weapon. Whereas Illyounger manifested part of her own life force energy to create hers, OldYana was forced to utilise the only thing she had left, Warlock. And kudos on hearkening back to New Mutants #48-50 and the Transmode infection of S’ym and Limbo. Cleverly picked up on in the Exile fairytale, when mentioning something new and ancient. 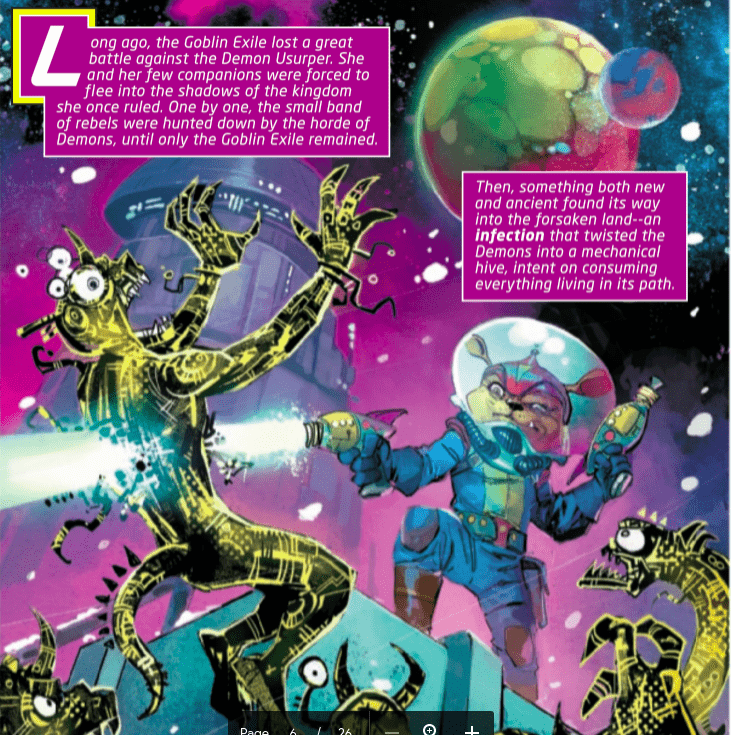 And then in the finale we are again treated to another glimpse into the world our Illyana lived in, with the tragic realisation that for one fleeting moment she managed to shake Cat from the thrall of Belasco. This in itself is a bitter pill to swallow. But again Vita’s rendition of that world is only enhanced and made more vivid by both Jan Duursema and Ruth Redmond, who also make me hanker for the next chapter in this story. And as well as that curve ball the rest of the story totally kept me guessing. All the time I expected older Magik to sacrifice them all to win her private victory. I don’t know why, but it seemed the more likely twist. And so I was glad that not only was I wrong and she sacrificed herself, but in doing so allowed her younger self to become stronger and a little bit less fractured. Could it be we are beginning to see the character growth that has been so long in coming? As such I absolutely adore Old Lady Illyana. Don’t get me wrong, I’m not in any rush for our girl to get there, but if she does grow into this Heavy Metal inspired warrior queen I’m here for it. 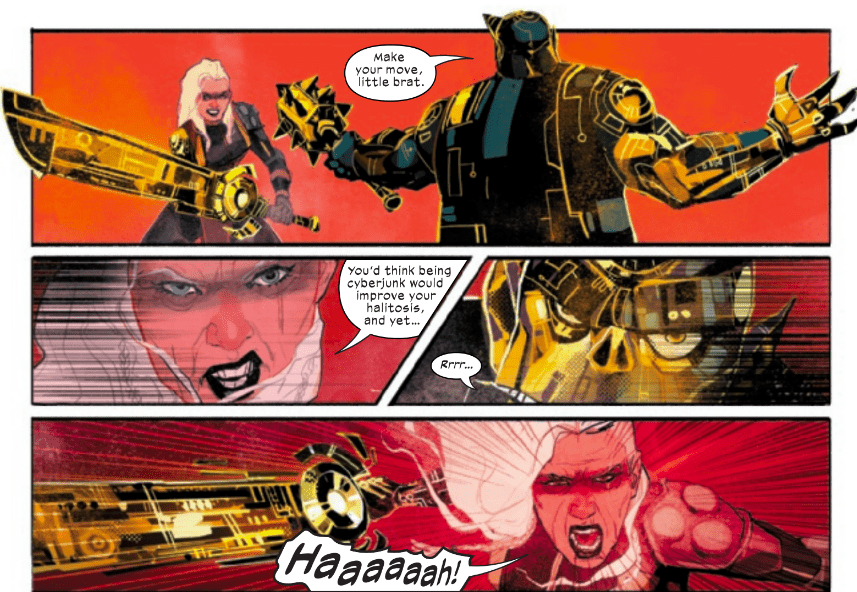 Though earlier I said the shared tender moment outstrips most fight scenes in general, it has to be said the final battle with S’ym was itself cathartic and incredible, and I felt an immense sense of satisfaction at his fate. The halitosis line alone was worth the journey. And the Outpost Journal entry 52 makes it clear that although the healing has begun there is still a ways to go. Which is fine. All of the years of pain cannot be undone with one slash of a sword. Illyana has more fighting to do. The Labors of Magik are ongoing and I wouldn’t have it any other way. We have seen her gain a new sword, forged from the hard won victory, as well as some healing wounds. Now we can look forward to some more trials of course, but she has her friends with her. And the New ruler of Limbo, Madelyne.….next stop Belasco. And the cover was a brilliant bit of sleight of hand. The appearance of the fractured pieces of Illyana, looking shell-shocked by her encounter belies the resolution and the healing that is clearly taking place. Leinil Francis Yu and Sunny Gho totally had me fooled and it has to be said gave a great dramatic backdrop to what unfolds inside. Loved the added touch of the front page text and even the bar-code and book number being displaced. Nothing is sacred here.

Some twisty turns and self reflection is just what our girl needed. But the battle has just begun. The first round goes to Illyana(s) but I want more. MUCH more!! Once again the whole creative team have pulled it off. Did I say I want more??