New Mutants #28: The Power of Three 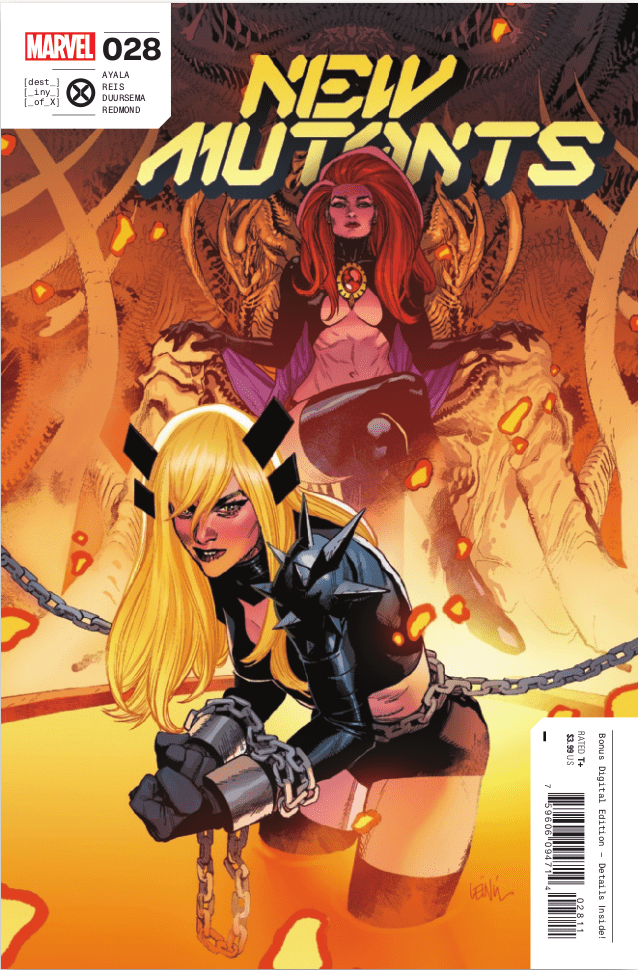 Illyana and her allies finally come to a decision about how to end the conflict and what to do about S’ym and the fate of Limbo. But in their confrontation with S’ym and his forces a new player reveals themselves from the shadows and it was NOT who anyone was expecting. And as is usually the case with magic there is power in three. We have seen the child and the older Illyana, now comes the third iteration. Illyana must once again face herself to overcome the doubts she has had about her past decisions and her true path in the future. 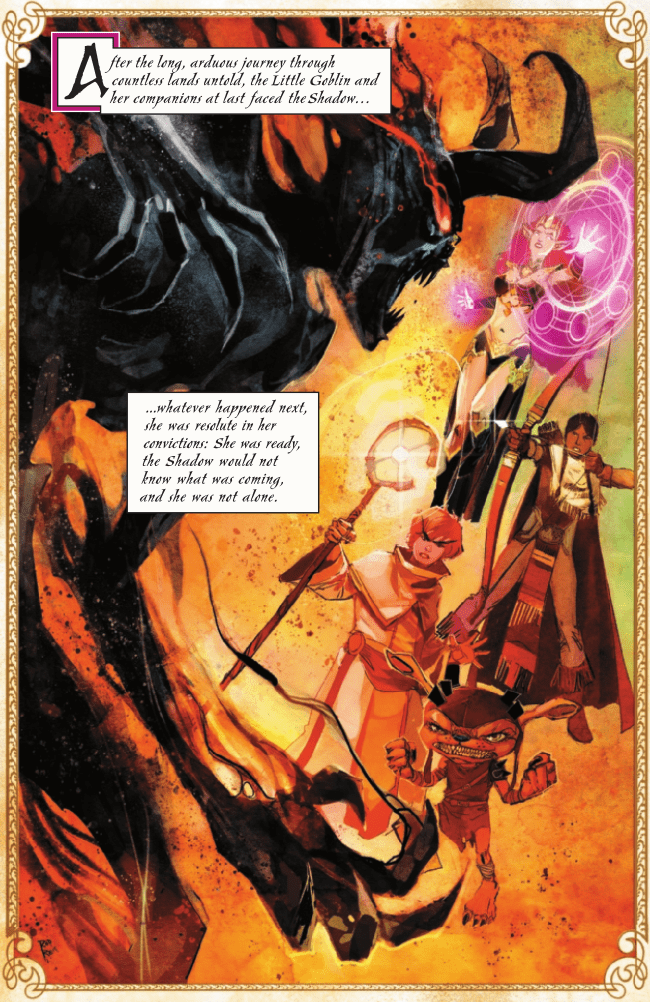 And so the Labors of Magik are over and in all this issue had three major high points for me. One major one is the fact Vita Ayala addresses the rift between Magik and Colossus and sets about the healing, by putting them in a room together to talk finally. They have long been one of the favoured set of X-siblings for me, particularly as I share some of the complicated dynamics with my own younger sister, who is just as feisty and outspoken. Although she doesn’t rule a hell dimension…to my knowledge. And secondly I did enjoy the way Illyana finally resolved the situation and again gained a power up in her new armor. And Rod Reis clearly revelled in dispatching the older Magik, with an extraordinary splash page displaying her final ‘powerup’. Even if visually speaking that scene gave me Phoenix Five flashbacks I enjoyed the visual and could almost hear the armor click into place. I may yet warm to the new look. 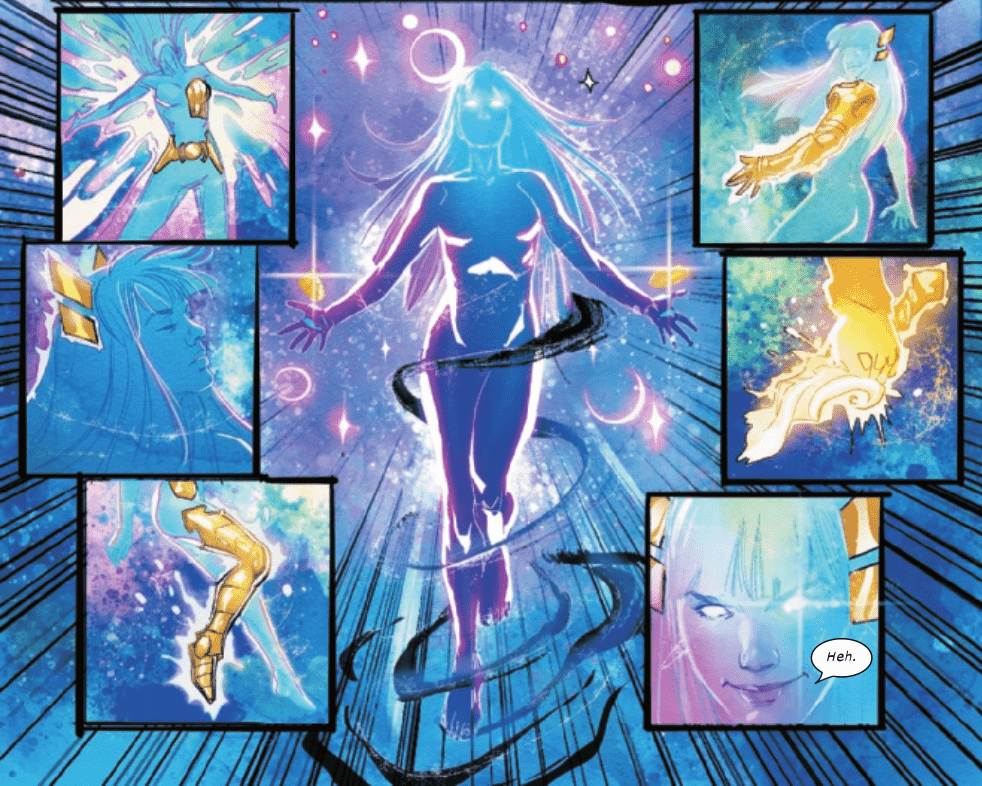 Though her whole reason for giving up Limbo was she had too much on her plate…while now she has joined the X-Men? I mean I’m all for it, but it does contradict what’s happening here a little. Finally I also loved the circuitous manner in which the story has resolved itself in the past with her younger iteration and the reveal about how she became the ‘Little Goblin’, again huge thanks to Jan Duursema and Ruth Redmond for that gem. But I have to say other than the otherwise positive outcomes I’m a little underwhelmed by the finale. The battle, if you can call it that, was over far too quickly and I was gutted I didn’t see the promised Fastball Special, let alone the fate of S’ym. Also for older Illyana to ascend she planned to sacrifice her younger self…Grandfather Paradox much? But its a comfort to know that younger Illyana gained some more logic and forward thinking over her older counterpart. Proving that her choice to return to the X-Men in the past and not remain in Limbo as its ruler was a wise one, as the one who stayed behind really wasn’t all with the smarts and stuff, even if she did trounce The Enchantress to gain her position.

The big reveal of the mastermind was of course not who I was expecting and I’m a little disappointed…but I guess had I been right it would have come off predictable. So there’s a dilemma to mull over there. I did enjoy the revelation of the fact Magik reads Sun Tzu. Because HELLOOOOO? War Captain!!! Although as we take in her letter to the Quiet Council her literary skills clearly end at reading, as her spelling seems to have gone to hell. And though her letter declaring her intent is addressed to the Quiet Council, it is clearly a statement to those in doubt as to what is going on, namely the readers who question what’s happening as regards her future, powers and sensibilities. Nice touch there. And the same clearly applies to Madelyne in her monologue, which has to be said was a little bit of repetition. Even Illyana points out all the discussion at this point is a retread. But in this case it was necessary to clarify some salient points before the finale to ensure that Madelyne’s intent is made clear. Because it will surely have a bearing in the not too distant future. 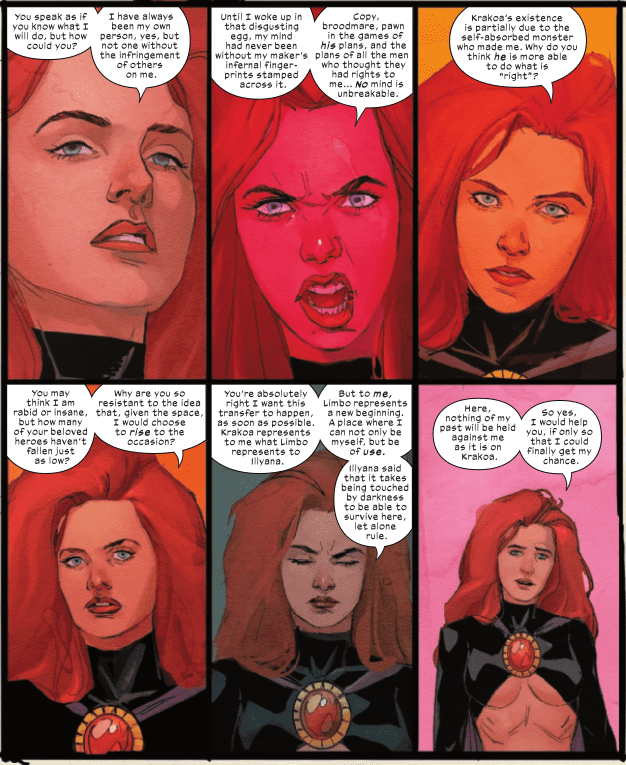 As for Madelyne herself I was completely taken in by her declaration of wanting a fresh start. So I was a little bit stung at her belittling her predecessor in her opening speech upon taking the throne. It seems a particularly low blow. Especially as Magik herself makes a promise to help teach her all she needs to maintain her edge. But it now seems she somewhat duped Illyana and maybe only said what she thought Magik wanted to hear to get what she in turn wanted, namely control of Limbo. We already know she has a bigger game plan thanks to Zeb Wells FCBD Spider-Man/Venom issue and Dark Web. But this seems a return to form and not a new leaf, and instead it seems she may be doing something about the ‘no clone’ rule of Krakoan Law. So I’m a bit saddened by this, but intrigued to see where she goes with it all. Also …Mads? We are calling her Mads now?? In the end it has to be said that even though this issue felt it missed some chances it did manage to hit the major hot buttons. And the cover by Leinil Francis Yu & Sunny Gho also gave the finale a bold and equally fitting image, with the two main characters in sharp contrast in terms of controlling interest and gives no doubt who is really in control now. Although in later months I anticipate this can only be a good thing for both in terms of progression.

An act in three parts with some major bright spots shining through. But I wanted more and felt a bit like I only got half the story.

New Mutants #28 The Power of Three