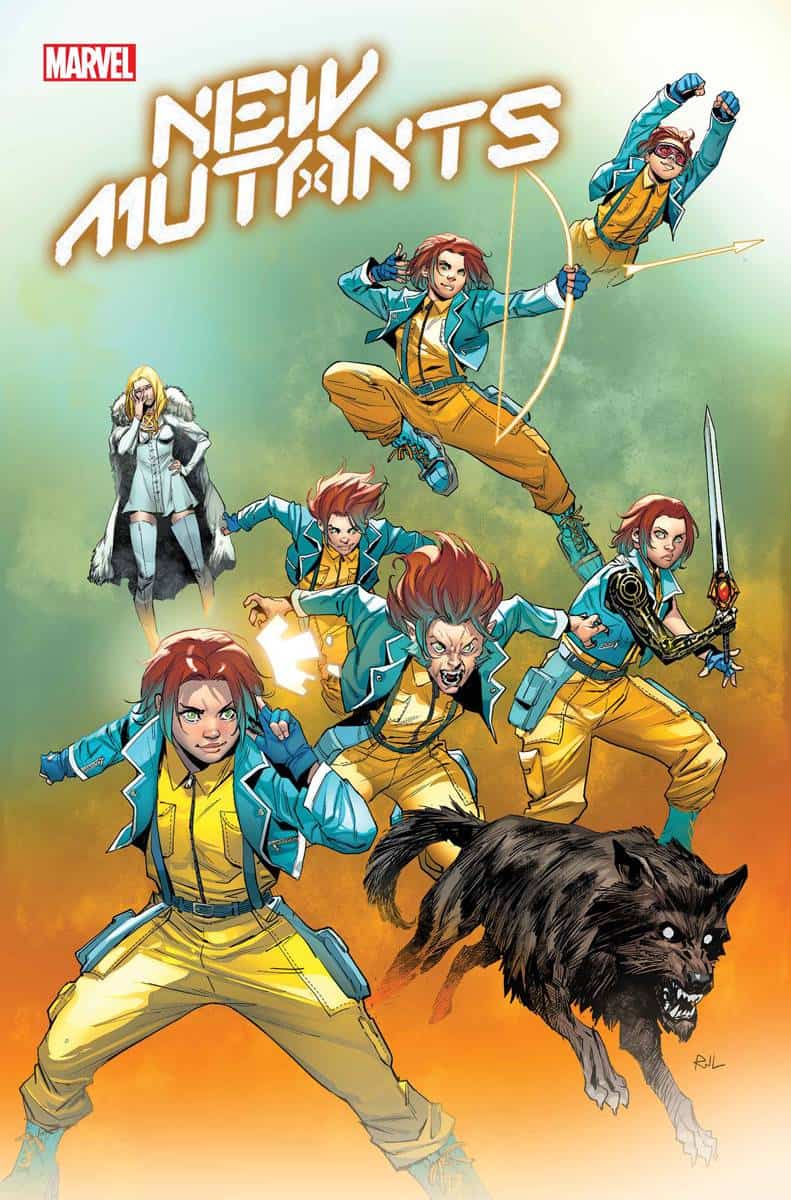 Escapade joins the New Mutants! Hugo and Nebula Award-winning author Charlie Jane Anders brings the breakout character of this year’s Marvel’s Voices: Pride anthology to one of the Marvel Universe’s most beloved teams! Personally recruited by Emma Frost herself, Shela Sexton reluctantly joins her fellow mutants on Krakoa in the hope that the X-Men can prevent the death of her best friend. But is Emma telling her the whole truth? Can Shela adjust to life on the island? Will the New Mutants accept her? Or is this crash course in Krakoan headed for a deadly pileup? Join Escapade and your favorite lovable mutant rapscallions in the start to a wild ride of a three-issue arc with artist Alberto Alburquerque and guest strips by Pride’s Ro Stein & Ted Brandt!

There are few things I have been more excited in my life than this new issue of New Mutants, as Charlie Jane Anders takes the pen from Vita Ayala’s life-changing run, being the second trans writer to take on my favorite title from the Marvel catalogue, and taking over some of my most beloved characters, as well as Anders’ new trans characters Shela A.K.A. Escapade and Morgan, and Ayala’s Lost Club (including some new queer characters like butch trans icon Leo). As a trans kid who grew up having the classic New Mutants as my fictional friends, inspirations, the way to understand myself and my trauma, having the opportunity of seeing this new generation of mutants expand with explicit trans representation, mentored by Dani, Rahne and the gang, is a delight, and one I had high expectations for. The issue surpassed them all. 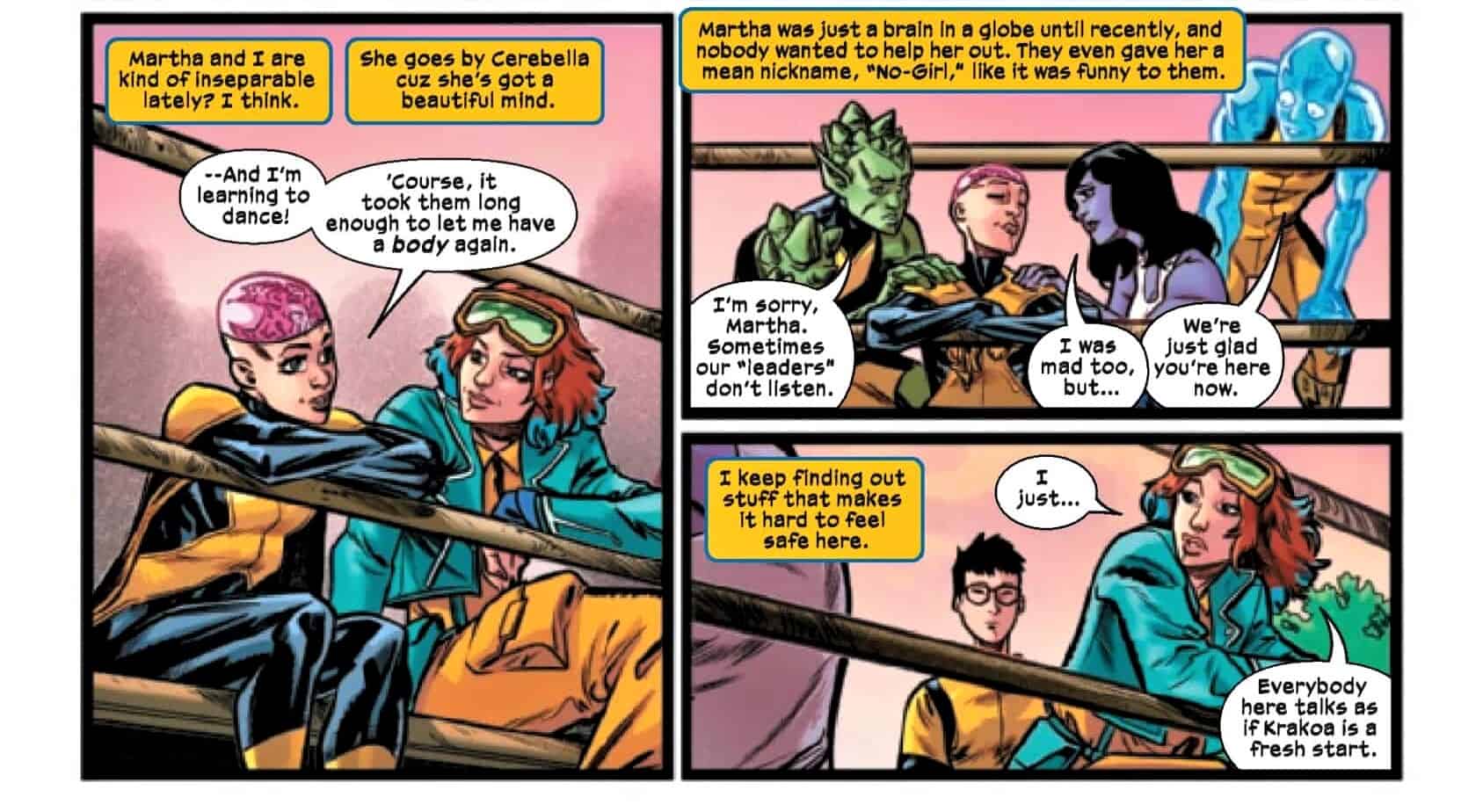 With the introduction of Escapade to Krakoa, we get a fresh view on the Krakoan era, as this more cynical character has a hero-dilemma reason to be there (her friend’s imminent death, predicted by Destiny), and, even though she’s understanding more and more where her Krakoan friends see the safety and necessity of their community, her skepticism is far from dying. Anders comes into this story as a character-driven writer, who rejoices herself in the little moments between characters (like Danielle and Emma’s opposed views on training mutants in fight or storytelling, or Leo, Cosmar and Shela discussing fandom), and that is very well complemented by Alburquerque’s classic, dynamic, even late 80s comics art style, that prioritizes expression and movement over realism, and López’s vivacious coloring (with the always cute, always heart-wrenching addition of Peanuts-influenced throwback art by Ro Stein, Ted Brandt and Tamra Bonvillain). This focus on character kind of overshadows the plot a bit, specially near the end, as the background story of Cerebella (formerly known as No Girl) takes over the comic and takes central stage (to be honest, the way she survives and gets resilience from her awful experience, without defining herself for it, fully inspires me and feels so in touch with New Mutants original run’s take on trauma and survivorship), setting the plot as clear throwback to Grant Morrison’s New X-Men run, in a deep way as a queer writer takes the torch of the legacy of another queer writer, 20 years later.

It’s soon in the story to analyze what messages is trying to tell or teach us, even though it is not shy with the references: the bonding of the main trans and queer characters over their daily lives and mutant experiences, the anti-mutant hatred displayed in a public art of support for mutants, the villains even calling to the genderqueer-ness of the team assembled, the talk of the mutant-human binary, even the introduction of the arc with a reflection of what storytelling is worth for and what it could serve us… As once talked by our own Travis Hedge Coke, the story that created Cerebella, staged the U-Men and put Sublime on the stage was depicting liberal bigotry, zealots and supremacist radicalization, and in an era where trans rights are under attack and in the spotlight of both liberal and conservative bigotry, these might be the most salient characters to bring back. This might be the story we need the most, one where the next generation of mutants are queer and trans kids fighting forces that want to take away their agency (and, if, after reading this review or this issue, you want to help trans lives in the real world, here are some links).

New Mutants #31 sets up an exciting, complex and adventurous beginning for the very queer next generation of mutants. Plus, creative team of Charlie Jane Anders and Alberto Alburquerque might be the Louise Simonson and Bret Blevins to Vita Ayala and Rod Reis’ direct take on Chris Claremont and Bill Sienkiewicz’s legacy; all filtered through Grant Morrison’s impact on the X-Men universe. The best of a fresh and modern story with a care for the creatives that came before them. I’m so excited to see this comic unfold further.