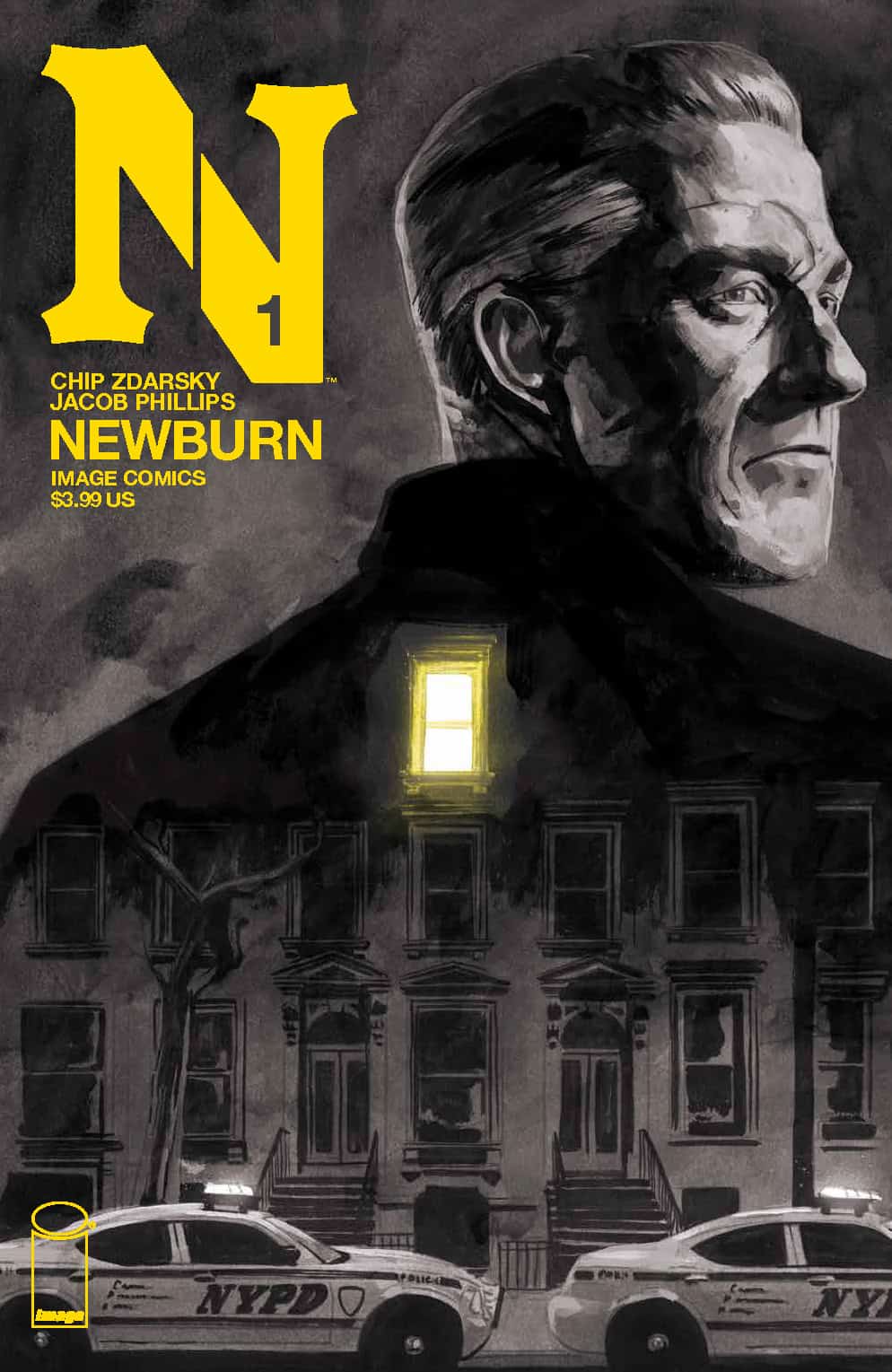 EASTON NEWBURN is a private detective without loyalties, investigating conflicts between rival crime factions while collecting enemies along the way. In this DEBUT ISSUE, a man is murdered after stealing from his own mafia family, but they aren’t the ones who ordered the hit…

There’s just something about comics and noir that gel well together. It’s possible that because of comic’s hybrid nature, combining the written word with images allows for the best of both mediums, letting a writer craft a compelling, sometimes almost lyrical narrative and narration, while the art can convey the violence and atmosphere that detectives always seem to find themselves in. Newburn #1, written by Chip Zdarsky with art, colors, and letters by Jacob Phillips, is proof that noir and comics go together, weaving an intricate web of mystery and murder.

Zdarsky’s script is tight and controlled like the best one and done procedural episodes of a mystery series. There’s never a wasted breath or beat in the pages of the book and it allows for the story to keep moving as it twists and turns through the mystery of a mafia death. Zdarsky brilliantly sets up both the issues case of the week style mystery while establishing Easton Newburn, the P.I. willing to take on the case of a dead mobster. That contradiction is wonderfully summed up in what feels like a throwaway panel, an NYPD officer asking why a gumshoe is interested in organized crime, and Zdarsky manages to bring back that question to reveal just who Newburn is in a subversive bit of exposition at the end of the issue. The book uses that expectation of what a procedural drama and noir story is going to be and instead zag and presents something new and original.

From the first page of the book, Philips pencils and colors set themselves apart from his other Image book, That Texas Blood. In Newburn, the art feels sharper, the colors ragged and muted in the way a good noir manages to convey. This is not the sparse landscapes of West Texas, but tight and compact cityscapes and frenzies of people that don’t know one another. The book’s lines and color both carry that distinct, compact feeling in its line work and fill in for the colors. It’s possible that working as the colorist for Sean Philips art for so long has embedded a piece of that noir, seedy sequential storytelling into Phillips art, and that influence shines in the book. That isn’t to say that Philips is just aping style or aesthetic without care, but feels like a tribute to the artist that he surely learned his craft under. It’s also a brilliant case of exploring what something like alternative inking and color can do to affect the pencils of a distinct artist.

Newburn #1 is one of those books that feel like it has the legs to be a sleeper hit. It has a stunning team from a prestigious independent publisher, a brilliant premise with room to run thanks to its episodic nature and an excellent tone and mood. It doesn’t hurt that it feels like it belongs in the canon of Ed Brubaker and Sean Phillips' criminal underworld of comics, while still feeling wholly original and originating from the voice and style of Zdarsky and Phillips. Like the best episodes of Columbo, there’s a sense of set-up, intrigue and then a twist or pivot that rings tried and true, and will keep you coming back week, or in the case of comics, month to month for that winning experience.