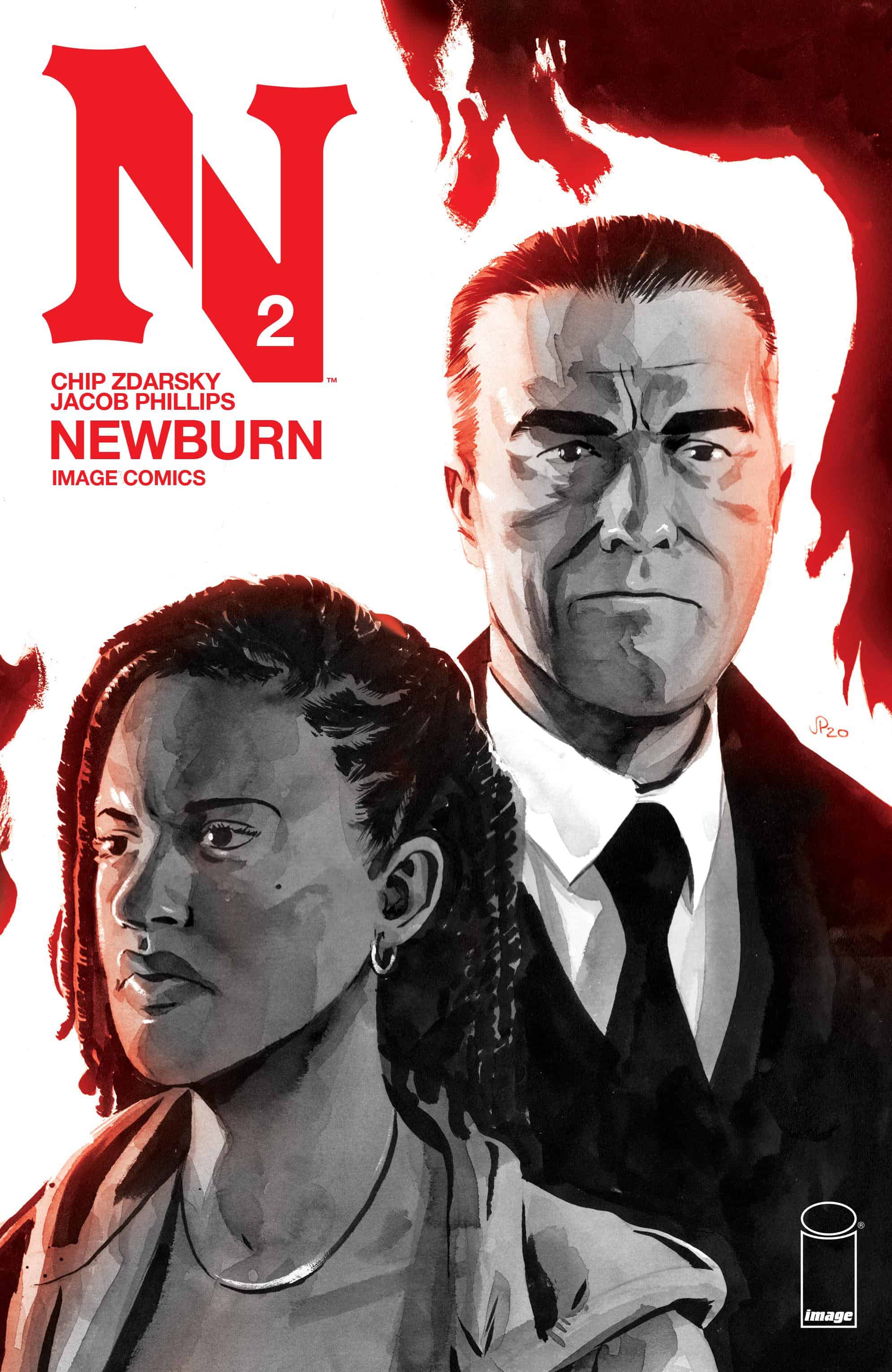 An arson case finds Emily talking to the community about the criminals involved—and about Newburn. If he’s as dangerous as they say, will Emily choose to help him?

PLUS: The mystery deepens in “BROOKLYN ZIRCONIA” from SHAMMAS and AYOUB!

One of the most difficult tightropes to walk in any type of fiction is the control of information. Too much information presented at once can cause an audience member’s eyes to glaze and call to mind the dullest of technical manuals. Too little information, and it’s like being dropped into the night without a light, searching for a source of illumination or clearance. What makes a compelling story, but specifically a compelling mystery is fine control of the information shared with the audience, giving just enough to where the audience can follow the story and work the case but not too much where the audience feels they’re a step ahead. Newburn #2 is a perfect example of balancing information, as writer Chip Zdarsky and artist/letter/colorist Jacob Phillips contrast the information of who the titular detective is with the various crimes of the city’s various criminals.

Zdarsky’s script for the issue is a great contrast between information known, and information learned. As Emily, and by extension the audience, get a deeper look into Newburn, from the perspective of those who know him, to observe his behaviors and patterns, a better shape of his character and ruthlessness come into focus. The choice to contrast a procedural case against the ongoing mystery, just exactly who is Newburn, is a compelling structure for the book. It makes for an interesting dynamic, where the investigator character in a procedural is the mystery itself. The character of Newburn is like a map of a major city, when looking at a zoomed-out view, everything is clear and simple, but as you zoom in, the intricacies and contractions become clearer. With a primary focus on who Newburn is, and what it is he wants, Zdarsky can build compelling smaller mysteries to experience from issue to issue, setting up the world in which a person like Newburn can exist and operate.

Jacob Phillips is carving out a fantastic, and specific niche, as the revisionist genre artist of Image. Working with Chris Cordon on That Texas Blood, Phillips presents stunning depictions of the neo-western, full of stunning landscapes, and the horrors of the crime beyond the city. With Newburn, Phillips is still operating in the vein of crime stories but moves away from western twinge and more into a neo-noir aesthetic. It’s still a focus on the darker aspects of life, but the backdrop is a little duller due to its backdrop of a city center, and a more refined and bound sense of the crime. That Texas Blood is filled with ritualistic cults and more interested in the root of evil in the world, while Newburn is the organized crime of mobs and syndicates, where there are rules and codes. Phillips’ art reflects those changes, with That Texas Blood having a more chaotic and fluid style, while Newburn is organized and structured. The issue’s strength is Phillips panel composition, feeling more confined and organized, a by-product of being set in an urban environment. Six and nine-panel grids compose many of the book’s pages, used to render various talking heads and show the multiple sources and paths that Newburn employs to root out his suspects.

Newburn #2 is a triumph of exposition and information, with Zdarsky and Phillips trickling the knowledge of just who Newburn is as he unravels various crimes across his city. The creative duo uses this issue to dig further into the man who works with every criminal organization in the city, and just what type of person it takes to do that. Paired masterfully with Zdarsky's control of exposition are the inspired visuals of Phillips, which at first glance appear as simplistic and muted, but upon further investigation, become clear indications of the controlled evil and darkness that permeates the world of Newburn.