Newburn #4: Who Polices the Policemen? 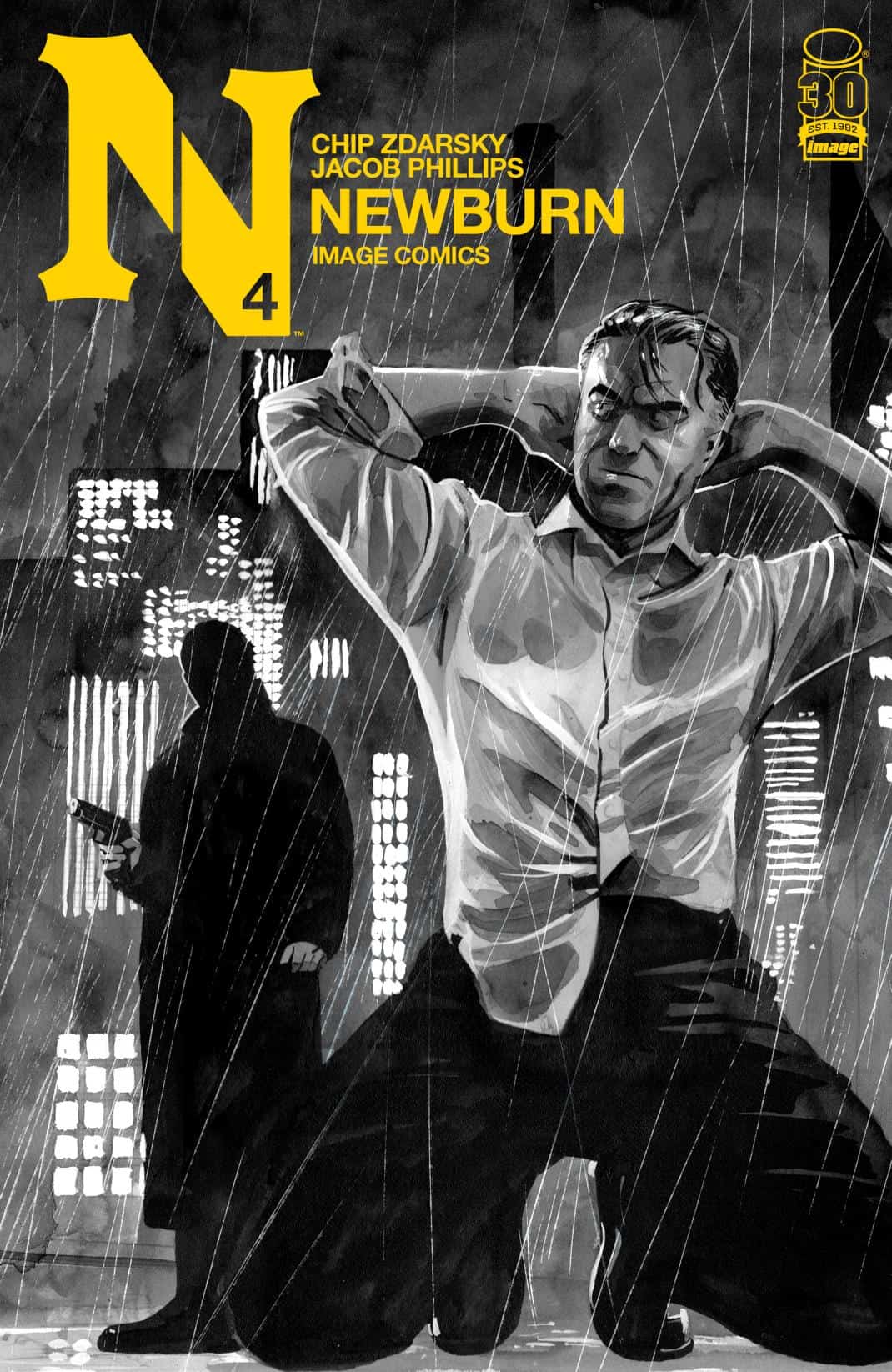 A cop is dead, and none of the families claim responsibility. Newburn will have to tread carefully, or else he might be next…

PLUS: The CONCLUSION of “BROOKLYN ZIRCONIA” from SHAMMAS and AYOUB!

Is there anything as striking as rain in monochrome, a figure drenched as they unravel a mystery with a gun to their head? It’s a staple of the noir/procedural genre, and is a perfect example of what Newburn does best; taking those familiar elements and executing them in new and fascinating ways. Newburn #4 is scripted by Chip Zdarsky and features art, colors, and letters from Jacob Phillips, which follows as Newburn is recruited by his former police employers to solve the murder of an officer, suspected to have been killed by one of the mobster Columbo’s criminal clients. Just like the first three issues, the mystery is more than it seems, and Newburn and Emily are thrown into a tangled mess of the mob, the cops, and idiotic mistakes that bind both sides of the table.

Newburn #4 is all about another player in Zdarsky’s wonderfully plotted New York criminal underworld: The Police Benevolent Association of the city of New York. The group, which on the surface is the city’s police union, clearly is revealed to be something more insidious. The issue lays out the perfect analogy for the ACAB era, explicitly stating this group is nothing more than another crime empire, with the notable difference of caring more about optics and having an indefinite lifespan. It provides an interesting framework for cops in modern crime narratives, setting them up as criminals with an air of legitimacy and directly sponsored by taxes.

It’s a sickening thought, but one that rings all too true in an era of police shootings and overall abuse of authority across not only New York but the entire country. Not to say it’s a deep or wholly original concept, but it’s in Zdarsky’s execution that makes it a gripping element. By adding the Police Union to the mix of crime families, Black Castles, and independent operators like Newburn, Zdarsky interjects another cog in the machine of New York, continuing to flesh out this world. In four issues, Zdarsky and Phillips have already created a deep and rich board to play upon, and it doesn’t feel like they’re planning on slowing down anytime soon.

That sense of scope works in sync with the procedural framework, making it feel like the entry into a series of pulpy detective novels, or a long-running TV show. The procedural structure perfectly weaves all of these elements into a rich tapestry of crime and shady dealing. That structure, combined with that large scale of character and players, gives the series an x factor that makes it one of the most unique feelings of books on the market. It keeps each issue tight and lean, not wasting any time in the set-up and execution of various crimes, without getting lost in exposition. That structure makes the book feel unique, both for Zdarsky and Phillips’ respective bibliographies and the spinner racks as a whole.

Between Newburn and That Texas Blood, it’s clear that Phillips was born to draw books set in the rain. (Someone needs to get this artist a Thor or Storm mini, stat.) Every issue of this book has a sequence or page that is just absolutely stunning in terms of composition or atmosphere, and this issue does not disappoint. A group of mobsters takes Newburn out to the docks for quick and clean execution, and it all occurs in a hefty shower. There’s no action, no excessive force, but Phillips’ ability to render that rain falling, slicing across the page keeps focus in the conversation between Newburn and the criminals.

Newburn #4 is another win for both Zdarsky and Phillips, continuing a stunning run of procedural stories that still feel connected and building to something larger. The book has a lean script from Zdarsky that throws more pieces onto the board, and visually atmospheric art from Phillips that plays to both his strengths and the strengths of the genre. It’s a wonderful execution of those pulpy elements and establishes the creative team’s vision. With the sheer amount of players and stories the two appear to have for this world, hopefully, the book can continue at this trajectory and continue to be a refreshing monthly title.

Newburn #4: Who Polices the Policemen?