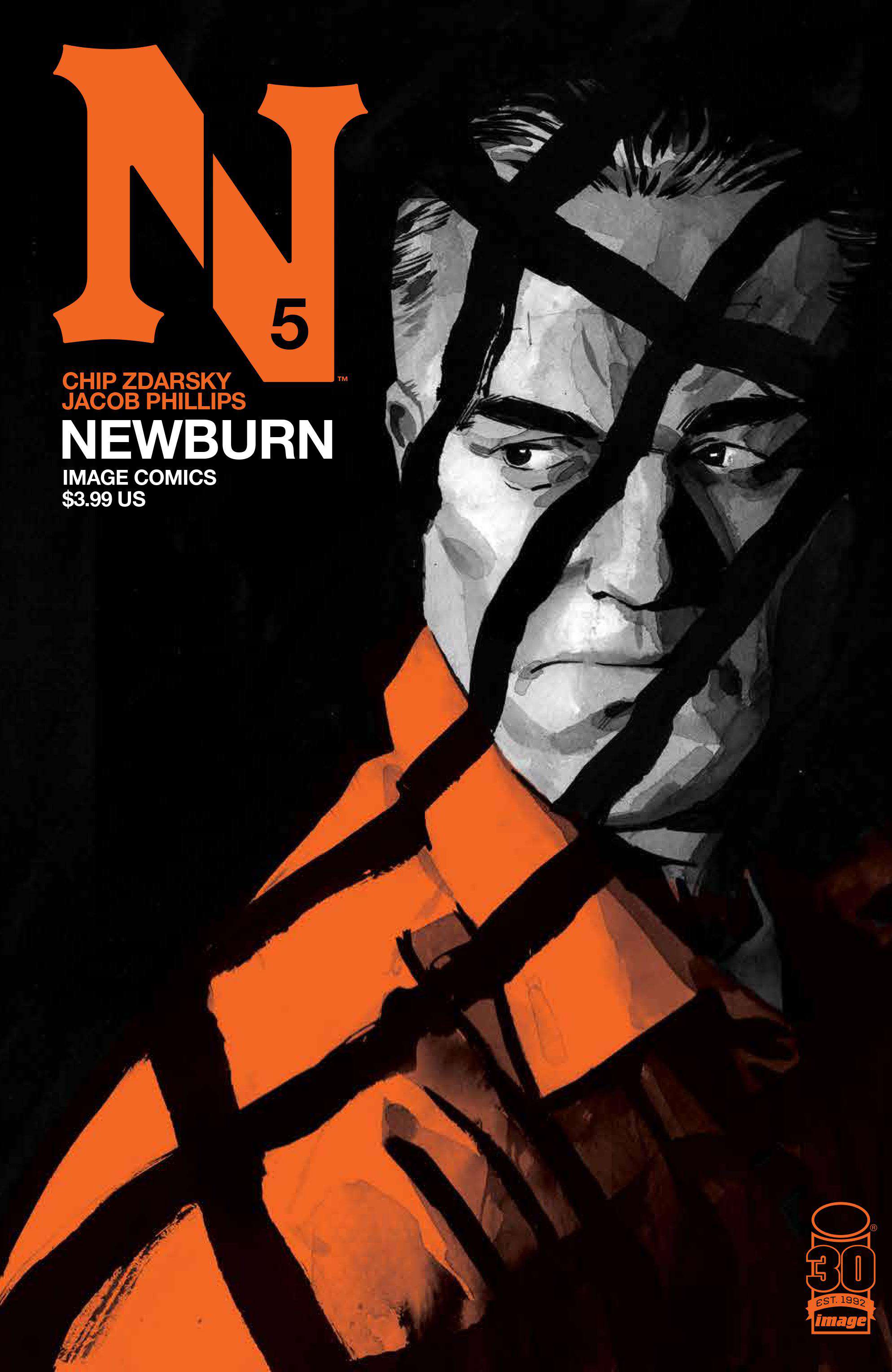 Newburn finds himself in his most dangerous position yet—in prison, surrounded by the men he helped put there.

When employed right, a cliché can be used to great effect. It’s why Shakespeare’s works are full of them, and people hardly scoff at them. One cliché, when done wrong, can elicit a groan and scoff at the corny nature of it is the idea of “Knowledge is Power”. It’s a sentiment that every nerd has been told in their life and one that requires a creative deployment to ring true. In Newburn #5, the cliché is tested and used to great effect as a motif of detective Newburn’s current case.

Newburn #5 continues writer Chip Zdarsky and artist Jacob Phillips’ descent into the fabric of New York’s criminal element, picking up with the mob detective behind bars. Newburn seemingly has been blamed for the murder of a member of the Albano family and is set up to be cellmates of one of the family’s former capos, Sal Russo. Sal quickly sides with Newburn, until it’s revealed the detective is here to gather info on the man. It’s a standard, stripped-down procedural case, but Zdarsky influences a distinct tone to the characters that makes this book so compelling to read. Newburn and Sal both know that knowledge is power, especially in the prison, and Sal acts as a good foil to Newburn’s always in control attitude.

Zdarsky builds the tension in the issue with forces closing in on Newburn on all sides. Working as the crime family detective, he’s crossed and put plenty of these inmates in chains, and they’re obviously looking for a pound of flesh in return. Zdarsky and Phillips show incredible restraint, only giving the audience one action scene. Newburn himself is only to throw one punch before he’s face down against a table, a member of the Black Council ready to inflict hell on the detective. It’s only thanks to Sal’s intervention and request of a favor that Newburn lives to solve the case. The scene is an excellent way for Zdarsky to show Newburn’s self-awareness, acutely conscious of his position in the criminal world, never begging or trying to make a deal in return for mercy. Even bleeding from the face and smashed against the table, Newburn knows he holds the cards and is already two steps ahead.

The twist of the issue is relatively simple as well and only comes thanks to the show of being powerless on Newburn’s end. Newburn is not the killer, but here in the joint to get Sal to essentially confirm that he leaked the info to the Black Council that got the Albano killed. It’s not the most shocking twist, but as with everything in this book, it’s so well executed and plotted that it doesn’t need to be. Zdarsky lets the story play out like a procedural through and through, and makes the book feel like that comfort episode of Law & Order that could be watched before bed, or the mystery paperback that needs to be beaten up and dog eared.

Phillip’s art is just as concise and captivating as ever, and the book’s coloring is what stands out. The link work is more controlled and lends itself to the rigid and sometimes claustrophobic sense of the prison. Phillips doesn’t play with the panel composition or layouts in the same way as previous issues, but that feels like a deliberate choice, based on Zdarsky’s straightforward storytelling choices, and the location of the issue. Where Phillips sings in this issue is his coloring choices, the oranges and reds contrasting the drab beige and greys of the prison. The pages for the fight between Newburn and the other inmate are striking, with Phillips employing the red of Newburn’s bloody mouth and nose to contrast the greys of the metal table. Combined with Phillips’ decision to use that same red as the background of the specific panels where both Newburn and the inmate connect their punches, it’s an eye-catching choice that draws focus and heightens the physical action.

With five issues under its belt, Zdarsky and Phillips’ Newburn is one of the best indie books out at the moment. It’s pure procedural storytelling and captivating art packed into 17 pages. Like any good network procedural show, it knows exactly what buttons to push, and never overstays its time. Like Newburn the character itself, the series is a lean, mean crime-solving machine and is a delight to have on a pull list every month. For anyone looking for that fix of smart, concise storytelling and masterful linework, and inspired coloring, Newburn is the perfect series to pick up.