Newburn #6: A Puzzle to Solve 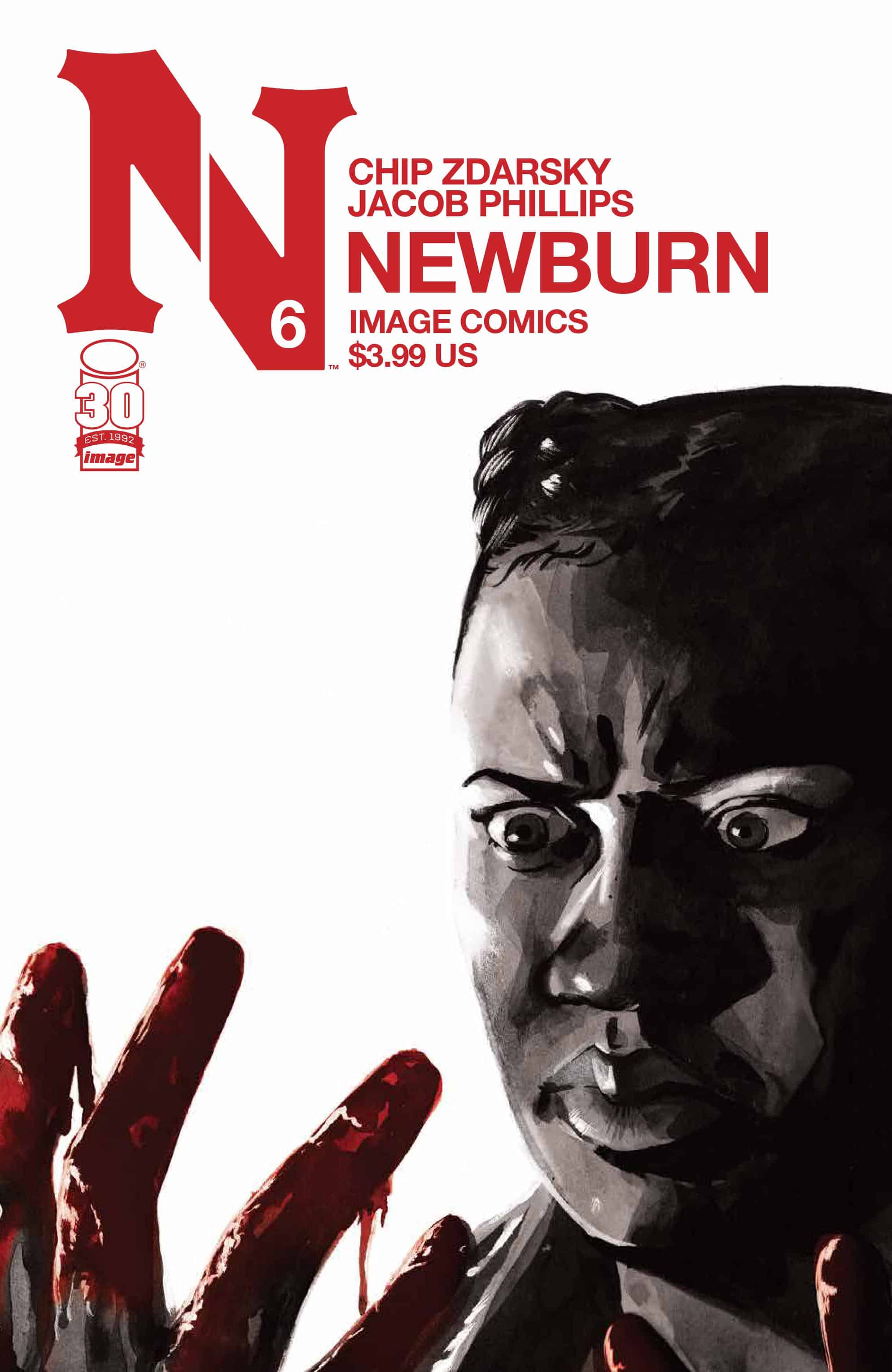 Emily has been doing good work for Newburn and his gangland clients, but what drove her into their world?

A good mystery story feels like a puzzle, with the various characters, motives, and acts serving as the jumbled pieces waiting to be connected. The execution of the story is how those pieces get assembled on their way to the finished puzzle. It might be the creators choose to give the corners first, anchoring the world and its rules. Other times, they may share a few linked interior pieces that form smaller parts of the image, which could be characters that have collided and their twisted motives. In any case, that segmented reveal of smaller clues and pieces that add up to the larger picture is the fun of the mystery, along with the process of linking seemingly unrelated parts that click in unexpected ways. Newburn is a comic that taps into that jigsaw structure, and with this newest issue, another section of the puzzle appears to be forming.

Issue #6 written by Chip Zdarsky with art, colors, and letters from Jacob Phillips, to all appearances, takes a break from the ongoing plot of the erupting gang war introduced at the end of issue five and dives into three timelines centered around a beat cop and a fellow police trainee. The issue tracks 2006, 2016, and 2022, and watches as Emily is enthralled with mysteries and puzzles, establishing her desire to become a detective. It then jumps to her helping out a fellow police trainee, who’s her complete opposite, focused on fighting and violence before jumping to a fight that spells ruin for them both. The issue then jumps to the present and sets up a conflict when that cop sees Emily working with Newburn, and his willingness to sell Emily out for a break on his gambling debts.

Like the previous issues, there’s no wasted time in the issue, and even across the three timelines, the plot feels like the exact number of pieces needed for a sprawling jigsaw puzzle. There are no additional or excessive pieces that accidentally got thrown in the box, and no misdirects. The shape of the story Zdarsky is building resembles those half-completed puzzles, and the reader is in the shoes of the young Emily, looking at the pieces and trying to make the connections. At this point, each issue is Zdarsky and Phillips flipping over more pieces, and leaving them on the table to fill in the larger pictures. There’s not enough to see the final image of this gang war, but there is enough that it’s clear the supposedly done-in-one issues feel more important, and make for a compelling argument to be reread for additional clues and missed pieces.

One of the best choices for the issue is to obscure Emily’s journal page interludes with superimposed dates for the three timelines the issue is working across. It’s a very simple choice, overlaying the years over the page, but it sets the reader into the various times, without Emily’s voice prefacing or influencing the events of the past. It’s a fascinating way to play with the release of information, and the expectations set in the first five issues. Instead of having Emily’s perspective frame the mystery and her insights into Newburn, the audience instead is getting an unbiased look into her past, and since Newburn is a figure that has yet to enter it, there’s no need for her commentary on him. It’s a smart way to explore Emily’s character away from the book’s lead and pays off at the end of the issue indicating Emily will be a major crux of the next series of issues.

The hardest part of reviewing Newburn, and by extension That Texas Blood, is the discussion of Phillips’ art and colors, as its impeccable and stunning at every turn. Phillips art from page one has been next level, and six issues in, it hasn’t missed a beat, working in perfect tandem with Zdarsky’s scripts to explore this world of crime and mystery. This issue highlights a staple of Phillips’ work, which is the use of explosive action sequences to hammer the weight of violence in this world. When a dirty cop in training – with possible ties to the Albano Family – goes to throw a punch at Emily, Phillips’ rendering of the act hits. Everything from the choice to simplify the background as an interrupted field of white, to give a stream of blood spurting from Emily’s mouth and a lack of onomatopoeia or sound effect beyond a simple group in a speech balloon, grounds the action. It’s not some long, drawn-out, pages spanning brawl, but instead a quick, six-panel, less than two-page fight. Not only is it efficient, but Phillips conveying that act of violence in such a kinetic, short span adds a gravitas that makes the scene stand out.

That scene is a great micro-example of an artist getting to hone sequences and their storytelling while working as the singular creator in terms of the finished product. It’s a testament to both Zdarsky’s skill as a writer to trust Phillips’ storytelling decisions as the artist, colorist, and letterer, to convey those little details that compound to the intended effect, and to Phillips' ability to execute the written word and tell the story and action through his visuals. Newburn is one of the strongest crime books currently on shelves with Image (which is saying something when looking at that shelf as a whole) and deserves to be on everyone’s pull list. It’s a book that keeps on giving and feels just as rewarding as snapping interior pieces into a work-in-progress jigsaw puzzle.

Newburn #6: A Puzzle to Solve