Newburn #7: Truth at the Bottom of the Glass 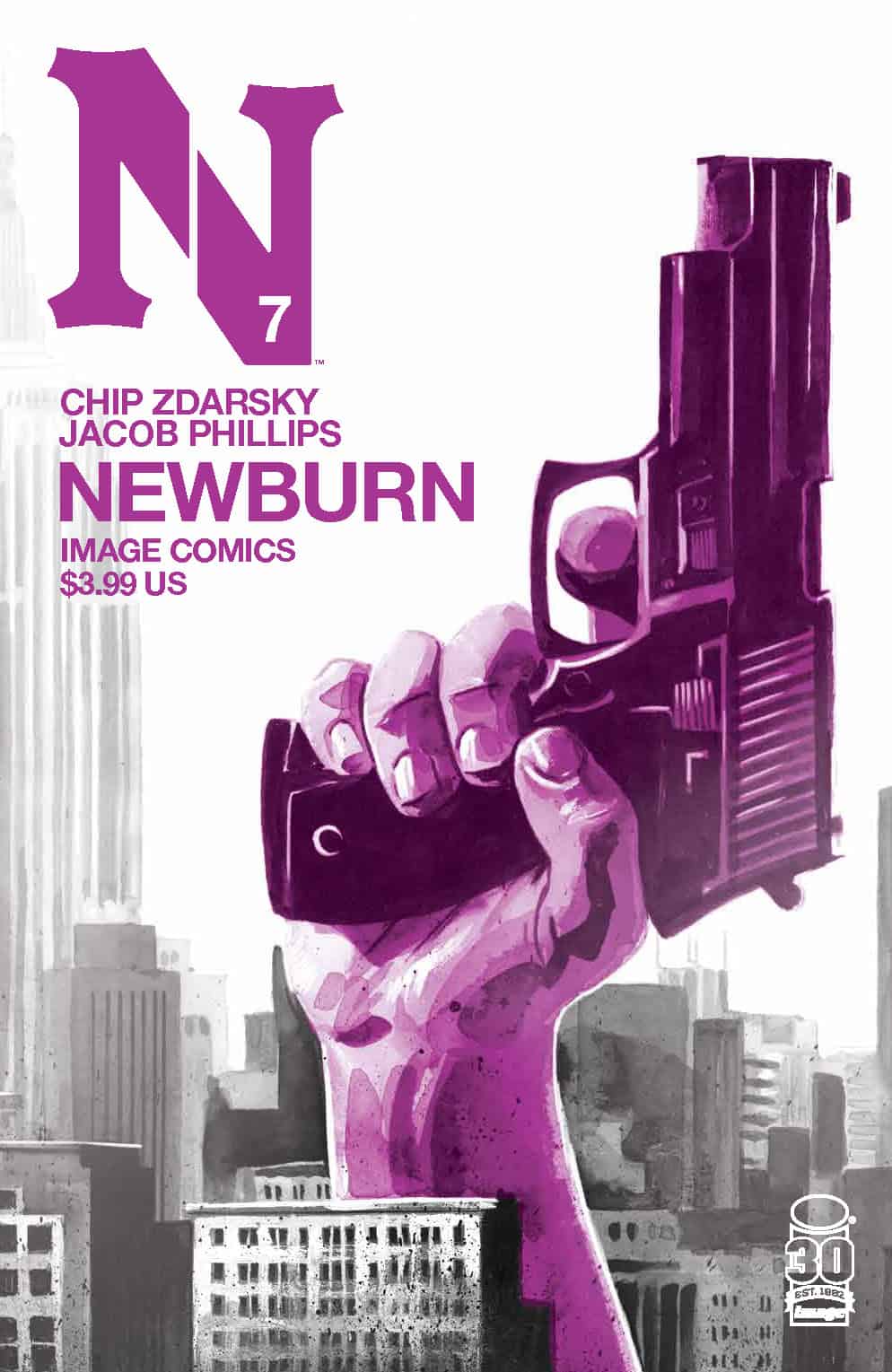 The murder of a Yakuza boss could send the criminal world into chaos if Newburn can’t find the killer before the cops do.

Tension is the beating heart of storytelling in any medium, and when employed correctly, can make a piece of work stick with you beyond the page. That conflict worms its way into the mind and gets the blood pumping. It will also drive the story, along with feeding into the rhythm and pace of the work. The inverse is also true, in which a story lacking in tension and conflict will feel out of tune, or dull and forgettable. Harnessing that power of tension is a sure-fire way of crafting a compelling work, and it’s not hard to see the conflict driving Chip Zdarsky and Jacob Phillips’ Newburn.

Newburn #4, written by Zdarsky and drawn, colored, and lettered by Phillips, sees the story follow up on the cliffhanger of the previous issue. The Yakuza’s head has been killed, and Newburn is on the case. It appears that the head’s murder was closer to an accident, rather than a planned hit based on the murder weapon, a kitchen knife. After the duo departs, it becomes clear to Emily that the story the cops have is all wrong, and the pair prove they’re smarter. Or at the very least, more focused on the truth than everyone else. That fact compounds and leads to a police precinct that allows Emily to reckon even more with her past, bringing her into contact with Sydney, the officer with the gambling debts from her training days. Their interaction is tense, as he knows about the hit against her, having sold her out, while she’s oblivious and trying to reconnect with whatever is left of the man.

Zdarsky’s script handles these tense moments masterfully, from the tit for tat between Emily and Sydney, along with to Newburn’s surprisingly earnest emotional confessions early in the issue. Newburn explains the reason he left the force was because of the force trying to frame the wrong person, and he got a Triad member cleared of false charges. Zdarsky perfectly scripts the core of Newburn’s character, with the detective stating “All I’ve ever wanted to do was get to the truth. And being a cop stopped being the place for that.” It’s a subdued line, one that would be perfect for anyone worth their salt to chew on, but with Zdarsky and Phillips, it’s a quiet and natural confession. The team gives a panel afterward for the words to sink in, with Newburn and Emily lingering in silence. It’s a masterful panel that helps to reinforce the rhythm of the story. It practically begs for a jazzy score underneath, paired excellently with Philips’s noir-inspired coloring.

Phillips’s art stuns in the quiet moments of this issue when Newburn and Emily share a drink and discuss their past. In a book that has some of the most grounded action sequences, something is gripping in the way Phillips composes his panels for these intimate scenes. It’s the flow of panels that gives the book a cinematic quality, with a specific panel rendering that emotional weight. It’s a tight close-up of Newburn drinking from his glass, but it conveys the heaviness of the detective’s response to Emily’s questions about who they’re working for on the case. Phillips’s panel progression is a striking way to show that hesitance, before letting a little bit slip. The close-up says more than any caption or word balloon ever could, and the panel is as intoxicating as one would imagine Newburn’s drink to be.

Newburn #7 is an issue that excels in channeling conflict into an inspiring story. Every aspect of the book, from the writing to pencils to colors should be used to teach tension and conflict to storytellers. Zdarsky’s words paired with Phillips’s art allow the story to unfold at the perfect pace, never lingering in the past, but giving it the time and space it deserves. As Newburn continues to heat up with the looming gang war, and Emily’s past catching up with her, this is the book that deserves to be at the top of every pull list.

Newburn #7: Truth at the Bottom of the Glass