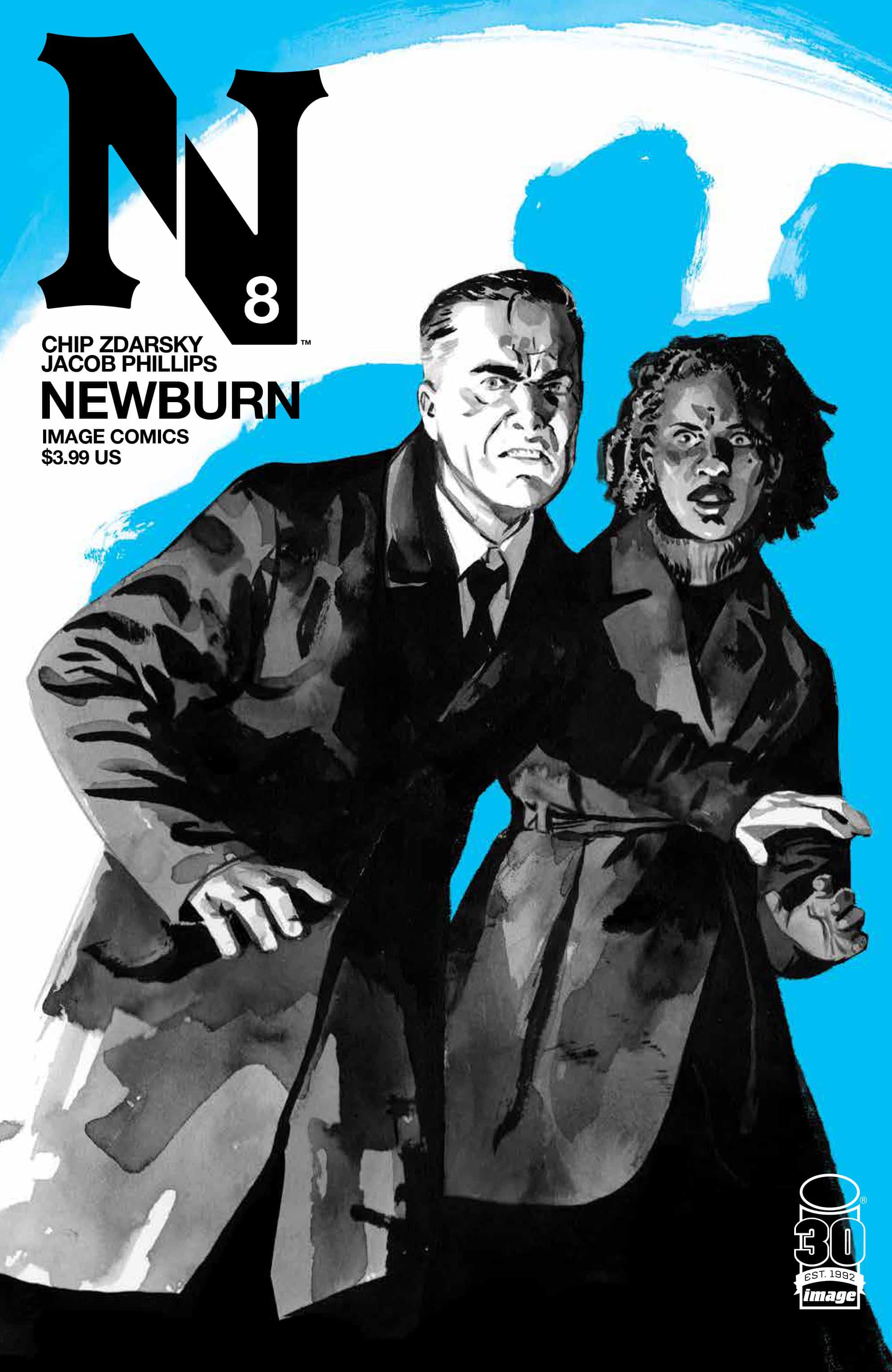 With both the cops and the Albano family closing in, Newburn may have finally found a case that even he can’t solve.

Endings are difficult for any story, but mysteries, in particular, are hard to wrap up. In a genre that actively asks the audience to speculate and ponder, especially in a serialized story that has weeks between installments. It’s difficult to live up to the expectations of the audience, as any deviation from their concocted resolutions can be seen as a disappointment. A well-constructed mystery will supply the audience with all the information that leads to the ending but convinces the audience they figured it out without any additional help. Works that can thread the needle and lead the reader to the conclusion are successful in their execution, and in many cases resonate even more. Newburn #8, written by Chip Zdarsky with art, colors, and letters from Jacob Phillips, definitely falls into that latter case, wrapping up the first volume of the series with superb revelations about who killed the Yakuza head and is attempting to stoke the flames of a gang war, while also revealing more about Newburn and his past.

Zdarsky’s script for Newburn #8 does double duty, tying up the plots of the last seven issues while also digging deeper into Newburn and his past. The issue jumps between Emily at the police station, unaware of Sydney the gambling addict cop’s betrayal, Newburn piecing together the Yakuza murder from the previous issue, and the Albano’s lurking outside the station, waiting to kill Emily and take in Newburn for retribution. The pacing of the issue is hectic and unrelenting, which is to the story’s advantage. By quickly hopping between the scenes it gives the issue a frantic energy and ratchets up the tension, making Newburn’s worry for Emily palpable. Zdarsky has two places in the issue (the opening scene and the confrontation with the Yakuza head’s murderer) where Newburn reveals more of himself and lets the facade of the cold calculating detective falter. Both scenes are charged with an energy that shows just how far Newburn is willing to go for Emily, and what he is willing to sacrifice for her.

This reveal is a gripping way to slide the audience closer to Newburn’s p.o.v, as the character has felt at a distance in the majority of the issues thus far. The detective on the surface is the stock neo-noir character; silent, collected, and unshakeable, even faced with murders and criminals. He’s been a mystery himself, serving as the connective tissue of the first few issues as he and Emily jumped from case to case. Then, as Zdarsky moved the story into more of Emily’s backstory, in the mini-arc dealing with the Albano family, Newburn still sat in the background, working cases, but hinting at the darker aspects of his character and history.

It’s a perfect bit of symmetry that Zdarsky employs to reveal the real Newburn as the mystery of this first volume comes to a close. Newburn also breaks away from that stock detective role, not caring about the truth, and more concerned about protecting Emily, while maintaining the status quo of the crime families as well. Sydney’s ratting out of Emily, the murderer of the Yakuza head, and Emily’s accidental killing of the Albano all makeup Newburn’s neat and tidy solution. Not everyone approves of this lie, and Zdarsky sets up future tensions with Casey, who is revealed to be Newburn’s partner from his time on the force. Essentially to save Emily, Newburn is forced to severely degrade his working relationship with Casey and the police force, and comprise more of who he was.

The degradation of Newburn’s moral character is no clearer than in Phillip’s art. This issue lets the artist explore negative space and shadows, signaling the story’s shift further into who Newburn is and the darkness of his world. There’s a panel that specifically sticks out, towards the end of the issue, after Newburn has thrown Sydney to the wolves, and stands in the background, cloaked in shadows as Sydney is held at knifepoint. Only the top half of Newburn’s face is visible, and even then, the left side of his face is obscured by black as well. It’s a haunting image and contrasts with the angry, screaming version of the character that Phillips renders in the early parts of the book. There’s no ambiguity to what Newburn arranged for Sydney’s betrayal and endangering of Emily, and his cold demeanor is a chilling expression of the lengths the detective is willing to go to for those he cares for.

Phillips’s work on the more vibrant or less shadow-oriented coloring is on full display in the issue as well, employing palettes of warm oranges and the pinks of twilight that feel original to the series. The coloring choices are a natural extension of an already vast palette for the series and help to create a sense of dissonance between the darkness of the subject matter that the characters have to tackle, paired with the warmth and beauty of the connections formed in that darkness. Phillips perfectly balances those two seemingly congruent emotions and aesthetics, syncing perfectly with the thematic elements Zdarsky infuses into the story and characters. It’ll be fascinating to see if Phillips can maintain that balance in his art and coloring as volume two starts later in the fall, with Newburn clearing reaching further behind the scenes of the city and the crime families.

Newburn #8 is a triumph as it concludes the first volume of the series, bringing together the seemingly standalone cases of the first few issues and the interwoven crimes of the later issue to one tight, coherent resolution. Zdarsky and Phillips knock that resolution out of the park, with the writing, art, and coloring all working to perfectly show Newburn’s further descent into darkness and shift the pieces on the board of this rich city full of criminal players. Now that the first volume has wrapped up, the series proves Zdarsky and Phillips stuck the landing and will be the perfect trade to hand to people who love a good mystery and wonderfully written characters. With a confirmed volume two coming Fall of 2022, Zdarsky and Phillips leave plenty of time to reread the first eight issues, again and again, to glean new clues and little details that may have been missed the first time around.