Nightwing #84: Home Away From Home 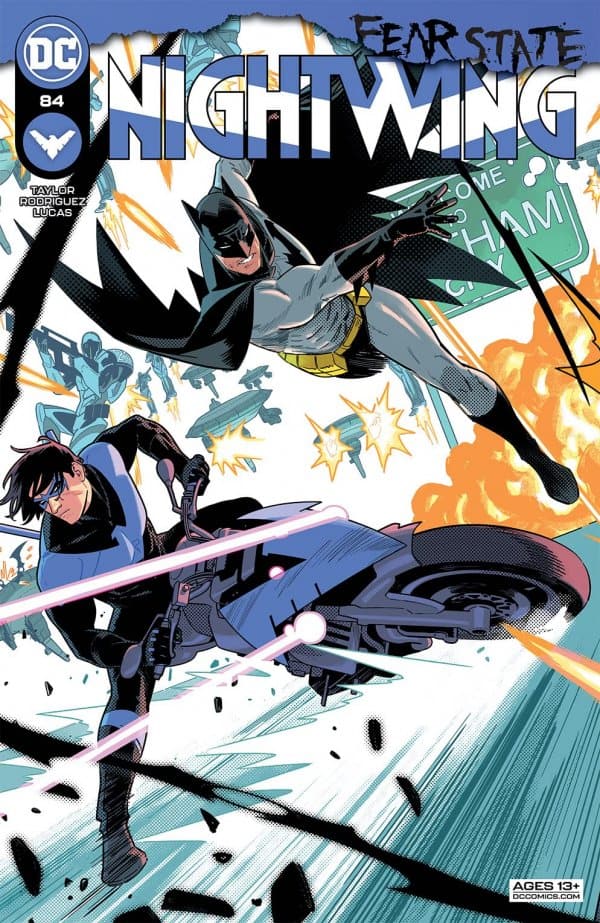 When the Bat-Family receives misleading information and incorrect directions from Oracle, ones Babs didn’t send herself, they realize Oracle’s system has been hacked! But who is powerful enough to break into Oracle’s own super-secure network? And what personal information is now at risk? Not only that, this mysterious Anti-Oracle is taking advantage of Gotham City’s state of fear and has bombarded the city with falsities, spreading even more fear. With the Bat-Team’s comms unreliable, Nightwing heads to Gotham to find the source of Anti-Oracle’s transmissions.

Just as things are getting good, it’s time to take a little detour. Dick Grayson may be busy in Bludhaven, but this week in Nightwing, he’s off to Gotham. Nothing like a crossover to sidetrack our heroes. This week starts the Fear State storyline, which is spanning multiple Bat-Family books. Scarecrow has taken over the city using The Magistrate and has basically stripped Gotham of the right to exist with any semblance of privacy.

A scrambled call from Babs brings Dick to Gotham, where he gets to face The Magistrate head on. Robbi Rodriguez, who has taken over as artist this issue, provides us with some extremely dynamic action once Nightwing arrives in Gotham.

It’s quick. It’s flashy. It’s even a little brutal once The Bat makes an appearance and gets to share a slightly touching moment with Dick– albeit after telling him to go home.

As per usual, Tom Taylor delivers some really fun dialogue that feels natural for our characters and keeps you interested. We get minor exposition dumps that don’t feel like they’re just simple explanations. They work in the narrative and don’t slow the pace.

Overall, while not awful, this issue is far from the best of the current run. Getting dragged into a tie-in story that arguably won’t need Nightwing makes this feel out of place. With what happened in the previous issues in Bludhaven, abandoning it for Gotham feels like a weird direction to go. Though I doubt the creative team for the book had much choice in that matter. Thankfully it was now, instead of in the middle of an arc.

Nightwing so far has been a strong book since Taylor's takeover as writer. This issue in particular falls short of the standard the team has been setting. Whether it be due to art changes or the fact that it's a tie-in to a very unrelated event, issue 84 of Nightwing just isn't up to par with previous issues.

Nightwing #84: Home Away From Home