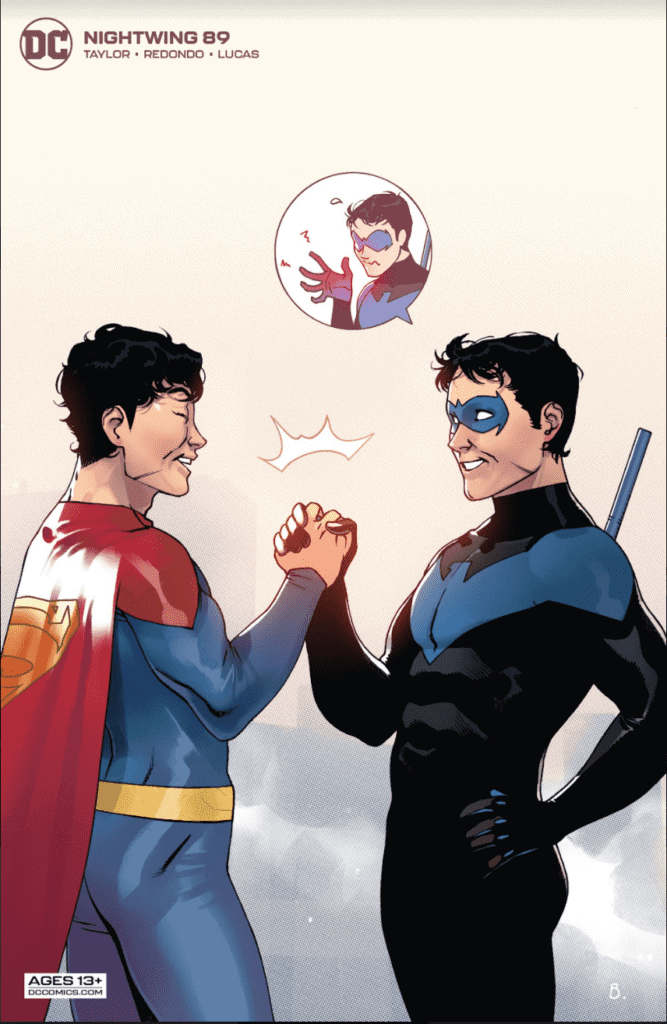 Superman/Nightwing crossover! Years ago,when Robin took his first uncertain steps away from Batman as his own hero, Superman stepped in and offered Dick Grayson crucial advice, support, and a name: Nightwing. Now it’s time for Nightwing to return the favor.

Tom Taylor has been granted a chance to write the ongoings of the sons of DC’s biggest heroes. In all honesty, I would’ve been shocked if he never did a story involving the two. Thankfully, we live in a world where these things are possible and being done!

Nightwing #89 very much spotlighted Dick’s more familial side. Having him help to comfort a young Jon, who was lost in the night. Despite Dick still being relatively young, we get to see a more fatherly side to him.

Though since that scene of Dick comforting a young Jon, well, Jon has been forcibly aged up. I personally have my own qualms with it, but there is not much Taylor can do about that. Due to this age up, the two read more like brothers now. I personally like the more parental Dick Grayson in this issue rather than big brother. We’ve had tons of brotherly love Dick Grayson over the years, but not much in the way of parent-like behavior.

As I said before, Taylor can’t do much about the age change, but he certainly makes it work. Dick comes across as an older brother looking out and it works. There’s a line about how you need to change your voice when wearing the mask. It’s advice towards Jon, and something even I hadn’t thought about as a reader.I’m simply left with a mental image of Nightwing, but with a Christian Bale type voice. Thank you for that Mr. Taylor. 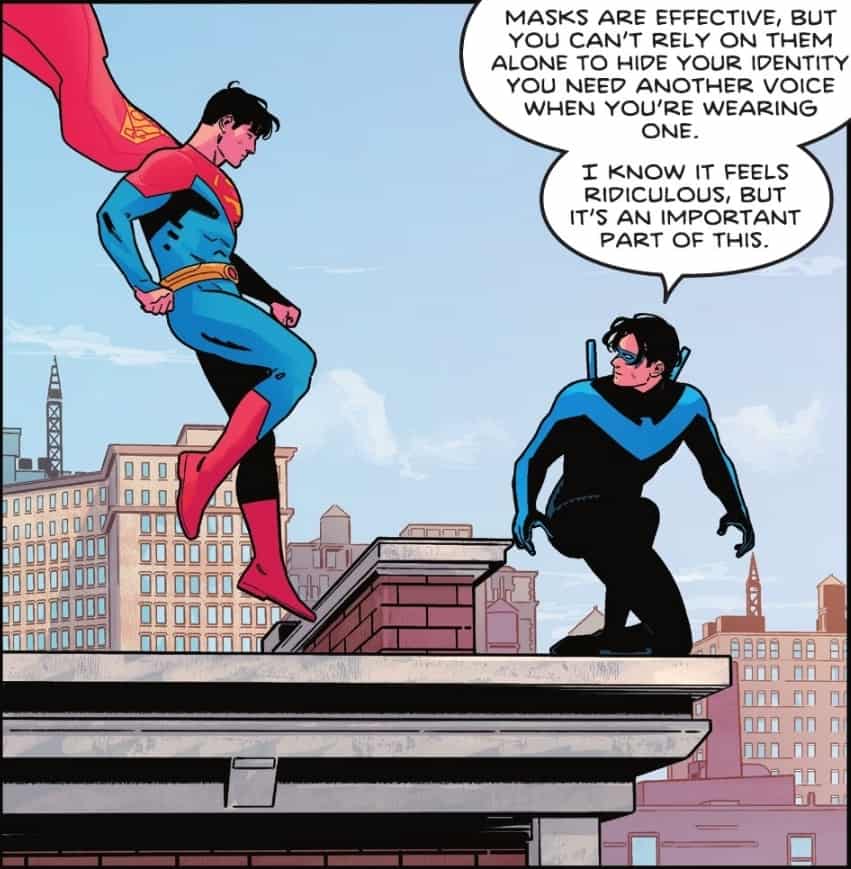 Thankfully you don’t need to be reading Jon’s ongoing to understand where he is as a character. You can figure out his relationship and role within it, his feelings towards his father’s absence and his drive to be a hero. While still new to the hero role, he’s clearly working on it. We get a scene where he questions what he’s doing as a hero as well as a moment where Dick moves him along a crime scene to figure out who may be killing superheroes.

I of course have the same praise to sing for our art and graphics team as usual. Bruno Redondo does stellar figure drawing and panel layout, which is always enhanced by Adriano Lucas’ vibrant, nostalgic feeling colors. Wes Abbott always does great lettering work, though I feel their talents are underutilized in this issue. Action scenes and large moments are where the lettering truly shines in this book. Sadly there isn’t much of either in this, so it feels like Abbott didn’t get to flex much muscle in comparison to usual.

This issue of Nightwing is very low-key in terms of its events compared to previous issues. Light on action, but full of fun character writing. A welcome break from the action for sure. Not necessary, but welcome.  Another stellar issue from the Nightwing team.