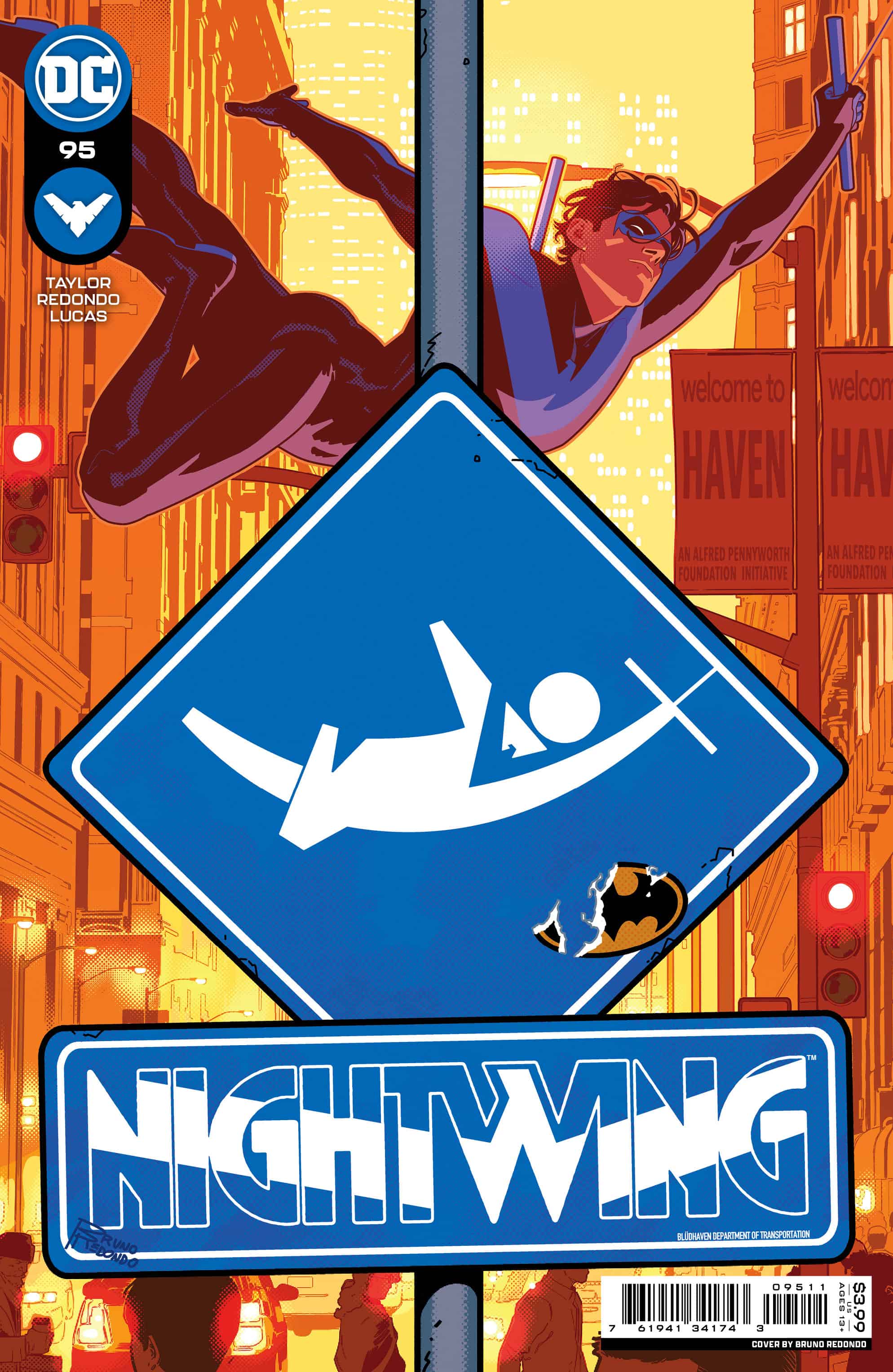 Heartless has an extra-giant jar that has Blockbuster's name on it, but as a man of refined taste, Heartless doesn't just collect any type of heart…he waits for someone to experience a specific emotion in particular before taking it all away from them and adding it into his collection. Does Nightwing have what it takes to save the life of the very man who's been trying to take everything away from Dick Grayson, including his life?

Team books are generally a boon for fans and lesser-known characters, but can be a difficult task for creatives. Having to juggle multiple characters and perspectives, both on the narrative and visual level, while maintaining a consistent tone is a tough task for the best of creators, in any medium, whether it be comics, games, or even movies. A strong team book achieves that balance, while usually rooting itself into a central perspective or character to set a foundation for the reader. With that general principle, a book like Nightwing exemplifies those tenants while still delivering a solo character-driven story.

Nightwing #95 – written by Tom Taylor, with returning artist Bruno Redondo, coloring by Adriano Lucas, and lettering from Wes Abbott – dives straight into the resolution of the last issue’s cliffhanger, with Melinda’s held hostage by Blockbuster’s goons. Taylor’s script quickly resolves the tension and works to set up what feels like the endgame of this storyline. Former police chief Maclean is killed by dirty Blüdhaven cops, reaffirming how deep Blockbuster’s corruption goes, and the work that new police chief Maggie Sawyer and partner Dan Turpin have ahead.

Meanwhile, Nightwing recruits all of the various allies that have popped up in previous issues, including Wally West, the Titans, and the Batfamily. Splitting off into groups, the variety of heroes work to cripple Blockbuster’s operations, forcing the villain into decisive action to strike at the heart of Blüdhaven, Haven, which was the cornerstone of the earliest issues of this run. The attack leads to a confrontation between Blockbuster and Nightwing where the mob boss can use Dick’s bleeding heart against him, and finally takes down the hero, who’s been cut off from his allies.

Taylor’s scripting is as strong as ever, but as is the case with most issues of Nightwing, the book comes to life thanks to Redondo’s pencils and Lucas’s colors. While the issue is titled Nightwing, Redondo’s art does its hardest to make the book feel like a team book, with a unified by distinct style for every guest hero that pops up throughout the issue. A team book would fit the artist in the future, but even when he has characters filling the page, the focus and emphasis stay on Nightwing, as he functions as the book’s p.o.v.

The second splash of the issue is representative of Redondo and Lucas’s talents for balancing characters, breaking the double page into four equal, horizontal panels that showcase the Batfamily, the Flash, the Titans, and Nightwing and Batwoman each stopping an element of Blockbuster’s machinations. It’s an effective way to compose an action montage, and equal space is given to each, but by having the page end on Nightwing, reminding the audience who is the focus of the issue. Redondo’s compositions and designs are a work of genius and make this series come together in a way that seems impossible for any other artist. That splash is just the flashiest example of Redondo’s skill, but the entire issue is littered with moments that play on the balancing of characters and giving them their due visually.

There’re plenty of fun character appearances in this issue, but one of the best inclusions would be Kate Kane/Batwoman, which throws some fuel to the tension between the vigilantes and Chief Maggie Sawyer. Kane and Sawyer have a long and complicated history, and the issue reminds audiences of it in a cheeky manner, Taylor hinting at some of the behind-the-scenes editorial drama that plagued the planned marriage between the two characters. In a story loaded with side characters, cameos, and special appearances, it goes a long way to say that Sawyer and Turpin are the issue scene stealers.

With the issue, the creators have made it clear after the Blockbuster plot is over, a Maggie Sawyer/Dan Turpin-led Blüdhaven Central spinoff – whether that be a mini-series, back-up, or Nightwing subplot – should be considered by DC. A spinoff would be the perfect opportunity to grow a lasting Nightwing supporting cast beyond the general Batfamily or Titans. Or at the very least, give a marginalized duo of vital DC characters a place to stay in the public eye across an already scattered and messy universe.

The only real fault of the issue, which is more a general complaint of DC’s current approach to continuity and shared history, is the lack of tension in the issue’s cliffhanger. Blockbuster uses a hostage to get the drop on Nightwing, and knocks his mask off, revealing to the hulking villain his assassination target, Dick Grayson. In another time, the reveal would be a shocking twist, but in an era when secret identities have lost their magic, along with multiple status quos of Dick being between identities being known, the reveal falls flat.

In another, longer piece of writing, the idea of masked heroes having their identity revealed shares a core tension with a will they/won’t romance of sitcoms passed. But once that tension is resolved, in sitcoms when the couple finally hooks up, or in superhero terms when the identity is revealed, the dynamic shifts (and in most cases, not for the best).

Nightwing has been consistent thus far, if sometimes a little slow, so the series deserves the benefit of the doubt. Outside of its last page reveal, Nightwing #95 is a near-perfect issue and a return to form for the juggernaut team of Taylor, Redondo, and Lucas, doing a lot of work to highlight the past and future of Nightwing. Hopefully, the team will be able to stick with the landing of the Blockbuster arc, and at the very least, the run (and issue in particular) has given Nightwing a strong supporting cast and visual style that should continue long past this story.