Nightwing #96: Love Will Keep Us Alive 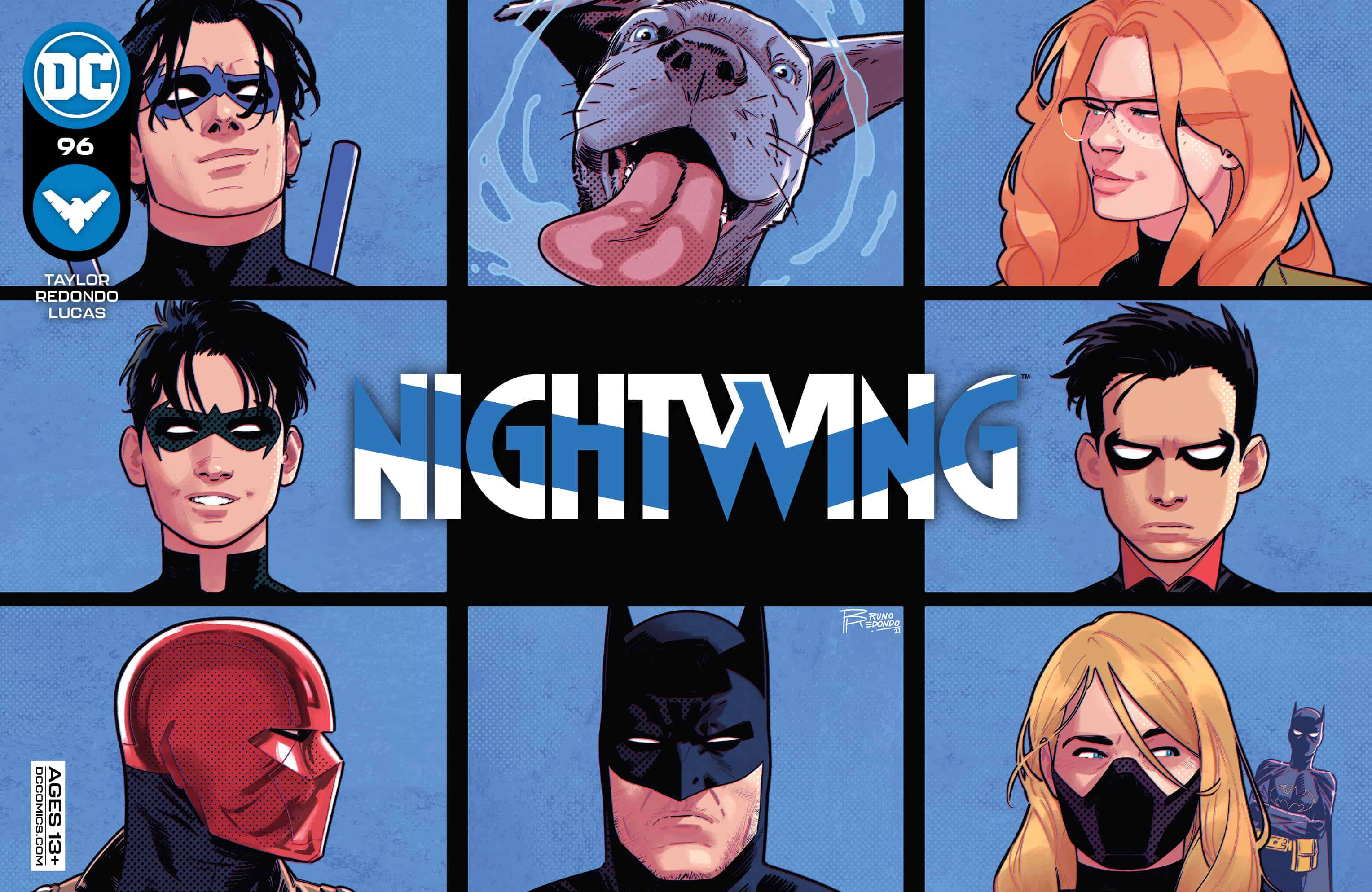 It’s fun and refreshing for romantic subplots to pop up in ongoing superhero titles. Comics and romance have an inherent connection (evident from comic’s other Tom [King] and his Substack series Love Everlasting), which works to help build out the lives of heroes. As comics have become more decompressed and focused on the larger scale of conflict, bolstered by summer events and trade-waiting, the romantic subplot has fallen to the wayside in much of cape comics.

Nightwing #96 – written by Tom Taylor, with art from Bruno Redondo, inks by Caio Filipe, colors by Adriano Lucas, and letters from Wes Abbott – is one of those titles that give a refreshing amount of time to its romance subplot, building out Dick and Barbara’s relationship, in-between villain fights and community service. The bulk of the issue’s plot is continuing the fight between Nightwing and Blockbuster, intercutting with the Batfamily’s attempts to dismantle the criminal’s empire and show the positive influence that Dick Grayson and Nightwing have had on Blüdhaven. The script never loses a tight focus on these ideas, but it’s at its best when it organically moves into the romantic subplot between Dick and Barbara.

The couple is one of the most storied across the pages of DC, and Taylor’s script does an amazing job of infusing that history into the duo’s passion for one another. After the last issue’s cliffhanger of Dick’s identity being revealed to Blockbuster, the story was telegraphing a breakup so that Nightwing could “protect” Barbara. In lesser hands, the story would immediately make this a dragged-out source of conflict, but Taylor subverts the trope and instead uses it to deepen the relationship. It’s a refreshing change that is allowing the two characters to grow and sees Dick setting roots after multiple runs of instability, fake deaths, and memory losses.

The dynamic between the two vigilantes isn’t the only interesting pairing in this issue, with the issue’s denouement pitting Heartless and Blockbuster against one another. Taylor juxtaposes the two villains, one as a classic Nightwing villain, while the other is new. While Blockbuster is greedy and selfish, only caring for his power and bottom line, Heartless is much more focused on a singular goal, literally taking what he wants from people.

The confrontation leads to another cliffhanger while typing loose ends in a bit of economic storytelling that gives the issue a solid punch. Which is an excellent way to summarize every element of this issue, in that the writing, art, coloring, lettering, and design all utilize a reserved but highly effective way of telling an emotionally resonant story.

Redondo’s art channels that efficiency in his use of silhouettes is a fantastic use of composition in the issue, giving the action sequences a dynamic flow on the page. It’s the same compositional skill that makes Redondo’s covers so defining as well, building off the use of negative space and coloring to create strong, clear imagery. Whether it’s Nightwing leaping at Blockbuster’s looming frame, Batgirl’s cape flying in the wind as she speeds on her motorcycle, or Heartless walking away from his most recent victim, the shape of a character speaks volumes and allows Redondo to push his sequential storytelling limits to new heights.

Lucas’s coloring also pops in the issue, pairing with Redondo’s clean linework and Filipe’s inks to sell the stunning action sequences. The blue of Nightwing’s costume, escrima sticks, and the electric charge they carry are the perfect foil to the red and whites of Blockbuster, and the orange/yellows of burning flames, making the rapid action easy to follow. The issue has a 12-panel, double-page splash that utilizes that mix of color to excellent effect, as the shades of the flames shift as Nightwing lands blow after blow on Blockbuster. The use of contrasting colors helps to break up the action in each panel while giving them uniformity that sells the environment and scope of the action. It’s a great representation of what Lucas’s brings to the series, and reinforces the overall design aesthetic of the run.

Nightwing #96 is a masterclass in the philosophy of “less is more” using simplistic shapes, plots, and color palettes to reinforce the emotional core of the story being told. The dynamic action sequences and cavalcade of characters are a strong selling point of this run, but the Dick/Barbara relationship and its momentum is the reason to pick this issue up. It’s the hinge in which expectations can be subverted, and is used organically to let the couple, and the individual characters of Nightwing and Batgirl grow and develop. With a relaunch of the DC Universe incoming, and Nightwing front and center, one can only hope that these progressions of the character can pioneer the next chapter of the larger publishing line.

Nightwing #96: Love Will Keep Us Alive