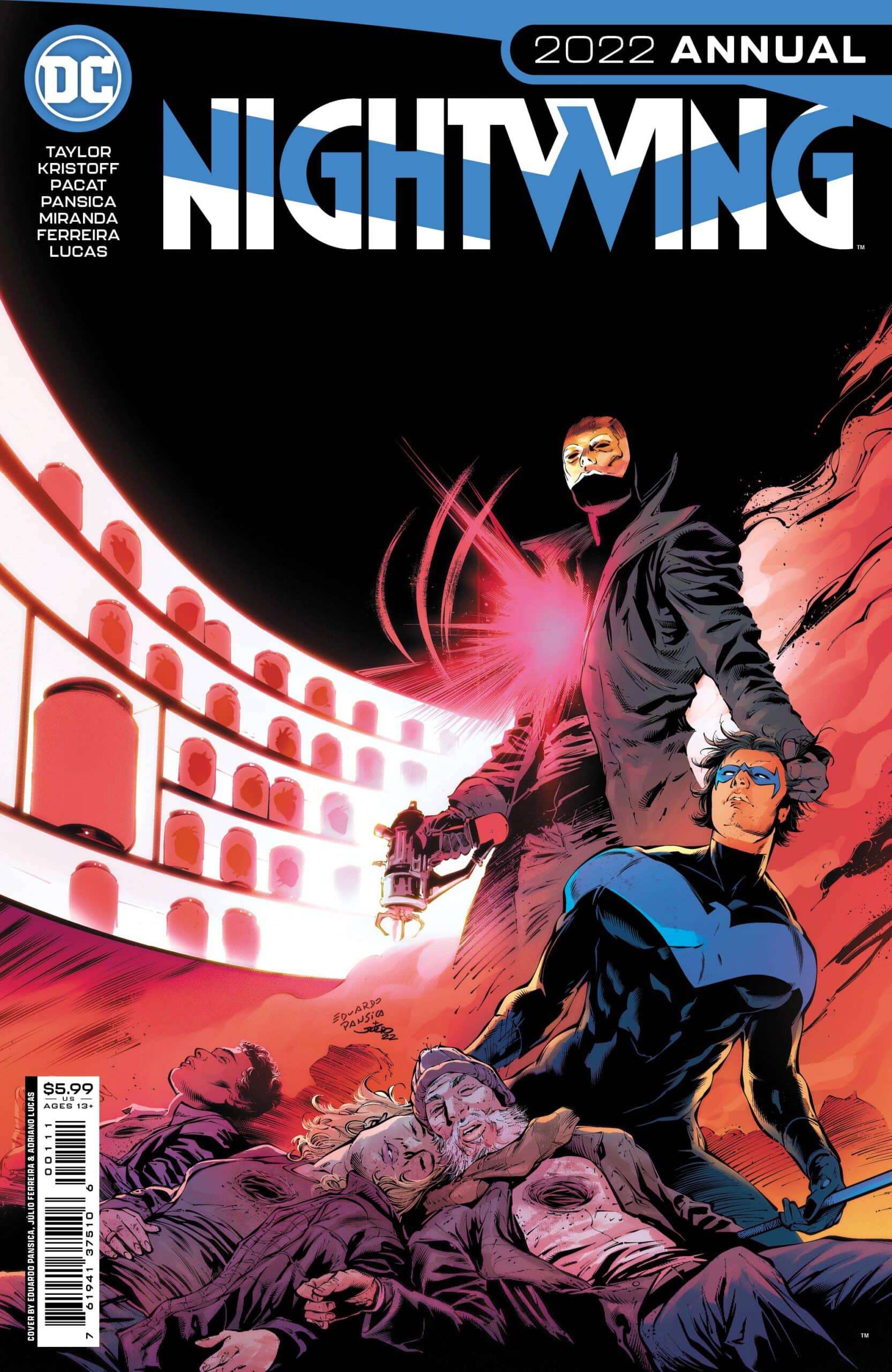 WHO IS HEARTLESS? Find out who the villain is behind the platinum mask, and why he only collects the hearts of some victims and not others...and why he has no heart himself. Then: Bitewing: Year One! Follow Haley in her first year with her humans Nightwing and Batgirl and see how she takes a bite out of crime in her first year becoming Bitewing!

Nightwing as a mantle is an interesting clash of two primary figures in the DC Universe; Batman and Superman. A Kryptonian myth taken by Batman’s original sidekick, the character has become a symbol of the character growing beyond the Dark Knight, forging a path forward, while still containing multitudes. That concept of multitudes is what’s on full display in the current Nightwing run, building the character back up as he helps to lead the DC Universe into a new place as Dark Crisis on Infinite Earths comes to a close.

Each of the three stories takes place in earlier moments of the current Nightwing run, expanding on the focus of characters and relationships, doing a great job of encapsulating the core ethos of the era. Taylor pens the first script, which creates a fascinating origin story for Heartless that ties him to Dick Grayson, intersecting the vigilante twice before their roles of hero and villain of Blüdhaven. Taylor constructs an excellent foil to Dick, framing Heartless as a sociopath led down a dark path thanks to his family’s new butler, creating a twisted reflection of the Dick/Alfred relationship. The use of narrative rhymes allows for a quick and efficient construction of the origin story and succeeds where many supervillain motivations fizzle.

Taylor’s scripting pairs well in this first story with Pansica’s pencils and Ferreira’s inks, which align themselves well with the artist style established by series regular Bruno Redondo. The story’s art is a strong choice, blending the emotional moments of the story, which speak to a perverse bond between Heartless and his butler with the spurts of action throughout. Though not as played out as the Waynes’ murder, the death of the Graysons has been seen enough that it takes talent to present the moment in a new way.

The use of diagonal gutters creating triangular panels creates a strong visual image for the moment, evoking the showman nature of the circus as the Grayson parents fall to their death. It speaks to the story’s point of view, as the moment is paired with the butler’s narration. It reflects the joy Heartless experienced watching the death, awakening a streak of cruelty that will extend throughout the villain’s appearances.

The second story breaks away from the darker tone of Heartless’s secret origin, placing the comic relief of the series, Bitewing, into the starring role. Kristoff’s script reads as a by-the-numbers Nightwing story at first, as Dick and Barbara go out on a date, leaving Haley alone in the apartment. The duo is kidnapped by a teamed-up Poison Ivy, Mr. Freeze, and Catwoman, being taken to a warehouse. The story is flimsy, and the villains quip and argue before the duo is saved by none other than Bitewing. Kristoff’s big twist for the issue is fun and makes clear why the story reads like a contrived plot, which is that it’s all an imagery scenario in Haley’s mind. It becomes a fun revelation that Haley dreams of rescuing Dick and Barbara, and gets so wrapped up in the fantasy that she destroys everything in the apartment.

The choice to have Pansica and Ferreira provide the art for the issue sells the comedy and reinforces the fun of the twist. The style is indistinguishable from the previous story in the issue and allows the artists to play with more action than the previous issue. That style is made more cohesive thanks to Lucas’s colors and Abbott’s letterers, ensuring that the expectation is the couple will have to deal with the villains themselves, and even throws in a fun Batman shadow until the twist crashes into the plot.

The fun, smaller details reveal this is a fantasy, and the art calls the sequence into question with the reality of the situation. Haley has torn into cat-themed dog toys, destroying Dick’s video games (evoking Mr. Freeze’s machines) and the potted plant. These little details in the art sell the comedic tone of the issue and make for fun moments in a reread.

The third story, aka The Lesson, split the difference in tone by utilizing a parallel narrative, with Nightwing helping to mentor Jon Kent while flashbacking to Batman’s training for Dick. Pacat’s script is quick and flowing, using the memories of Dick’s Robin training to reinforce the former sidekick’s knack for teaching, while also showing his growth beyond his mentor. While Batman expects perfection and drills the lessons into Robin, Nightwing is more gentle and forgiving, letting Jon make mistakes. It’s a masterful character study of the Dick Grayson character and makes clear why he is the future of the DC Universe. Pacat also captures Jon Kent’s insecurities well, with dialogue that balances the worry and confidence of the new man of steel.

Miranda’s art for the sequence helps to walk the line between tone and history, rendering Nightwing and Robin with similar energies. The fight sequences at both moments in time are well rendered and allow the flaws of both Robin and Superman to make their way out. The use of interrupting panels in the sequences is a powerful choice, utilizing Lucas’s colors to create a striking contrast in teaching styles.

The panels of Batman are shaded and feature harsh black backgrounds, while the scenes set in the present are colored with the blues and oranges of the sun breaking from the rain. It’s a beautiful encapsulation of the night and day difference between the vigilantes, and Miranda’s linework matches. The lines of Batman, when visible from the shadows, are much harsher than Nightwing’s, which only highlights the difference in training approaches.

The 2022 Nightwing Annual is a perfect sampling of the current run, providing three stories that speak to the artist, narrative, and emotional sensibilities of the book. It’s a rewarding read to current fans of the series, digging deeper into the key players of the run while reminding audiences of the stakes of the current villain, who’s taken the backseat to recent issues. It’s also a fun read for newcomers, offering snapshots into new characters and Nightwing’s role in the wider DC Universe. The art also sets an expectation for the style that appears in the main title while delivering different styles to Redondo linework. That expectation setting is also thanks to the cohesive colors and lettering from mainstays Lucas and Abbott.