From protege of the Bat to secret agent of Spyral, Dick Grayson has bounced around through life. Despite efforts to put down roots in the coastal city of Blüdhaven a lot is still up in the air. Now that Raptor is dead and Blockbuster is out of commission the city should be quiet. So why isn’t it? 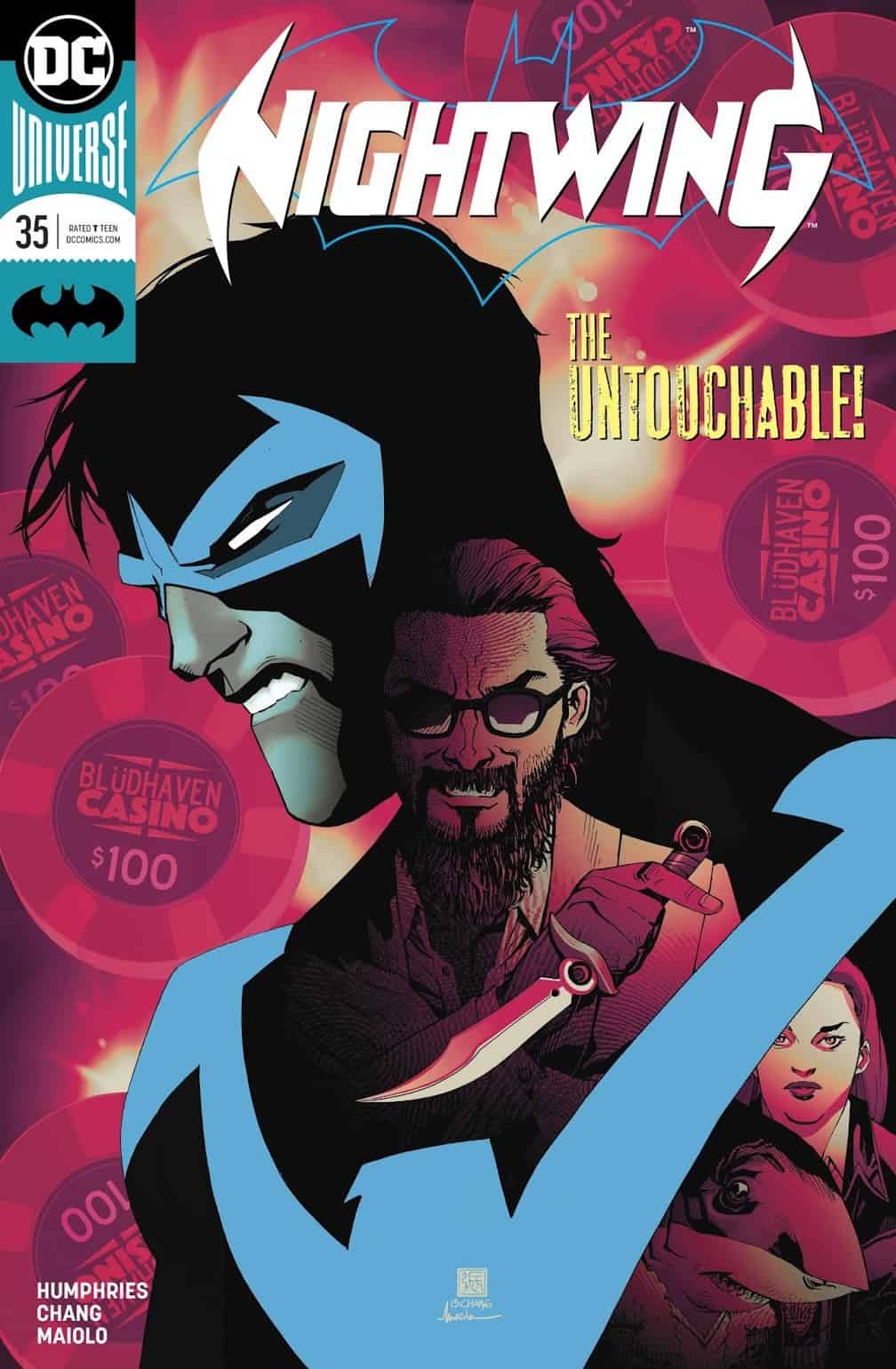 What You Need to Know:
How’s the saying go? “If you don’t know Nightwing, you don’t know ****” We all know who Nightwing is, former trapeze artist turned ward, Robin turned Nightwing. He’s even been Batman, point being, you know who Dick Grayson is.

Nightwing has been under attack for months, from Dr. Hurt to Blockbuster. Now that Raptor is dead and took Blockbuster off the table using Orca’s Blockbuster Antidote (typing it out feels like some Batman ’66 stuff, shark repellant bat spray etc.) the city is without an organized crime element. As if that wasn’t enough Dick was dumped by Shawn Tsang and fell in with the Huntress. Now he’s split with Huntress, and things may be rekindling with Shawn? Or not? Nightwing has managed to eke out a tenuous alliance with Bludhaven PD via police Detective Svoboda.

What You’ll Find Out:
We open on a blackjack table, an old woman, a man wearing sunglasses with a beard and a weird little shark man (who is basically never addressed. double weird) are sitting playing the game, The man with the beard starts talking to the old woman, initially the conversation is playful but turns quickly strange. Leaning over, the man hands her a knife, she knows what comes next. Without warning, she stabs the dealer in the neck. The shark-man jumps up in surprise, the bearded man is gone.

Cut away to find Nightwing responding to a traffic disturbance, the League of Limousine assassins (is… is that a thing?) are tearing through Bludhaven in a giant limo after a heist, or something, it isn’t explained super well. After an explosive confrontation (ha, get it?) they end up on a collision course with the Justice Tree, which has never been mentioned before but judging by its name it will almost certainly be burned, destroyed or otherwise ruined by new villain The Judge. Nightwing mentions to Detective Svoboda that the leaves don’t look quite right, foreshadowing! 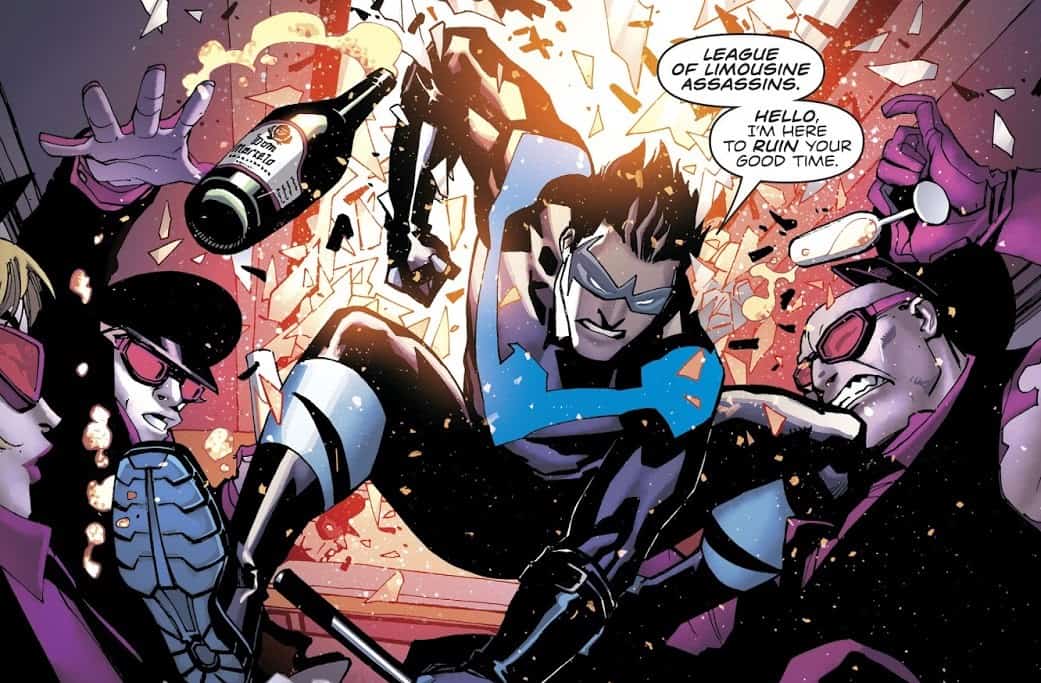 Later Nightwing returns home, he slowly climbs into an ice bath to soothe aching muscles, when he hears a yell, 5 am already. After an argument with entitlement, Dick starts the first day of the rest of his life. He has opened a CrossFit center, only a couple students to start, after one of the worst instances of Liefielding I’ve ever seen, Dick heads to the docks, he’s got a shark man to find.

Nightwing finds the shark man, Guppy, under a dock trying to start a fire to keep warm. Nightwing helps him get the fire going and they sit down. Guppy says he had no idea what the bearded man was planning, he just showed him around a little. Nightwing asks where he met him and Guppy tells Nightwing to check St. Judes, a monastery. Suddenly Guppy remembers a couple names the man gave him, Nightwing is shocked, they’re all the names of Judges, the Judge is back.

Man, the ending of this issue was nuts, not to be missed, I’ll leave it for you to find! Pick up your copy of Nightwing #35 today!

Plot:
If you aren’t aware a new creative team has taken over this issue, so far this first issue is a good start. Interesting that they’ve chosen to start in such a different direction, Not that Seely left them much room to expand on his stories, as he killed one antagonist and severely depowered the other. I thought Nightwing opening a gym was a good idea, surprised more superheroes haven’t jumped on that thought.

The Judge looks to be an interesting villain from what little they showed, I like that so far this has been a bit of a mystery. If this is the kind of writing we can come to expect from this creative team I think I’m pretty firmly on board. It seems like this arc might rely heavily on flashbacks so we might get some Bat or Titan action next issue. Can’t wait to see what happens next!

Art:
The art is pretty great overall, the detail and colors are a bit reminiscent of an 80s movie, full of pastels and bright lights. I thought the car chase scene was done wonderfully as well. I will say the gym scene was a bit off, with the indignant woman seeming to fluctuate in size in the four panels she is in, as well as Dick being drawn as some kind of hyper-muscled he-man for one panel, despite classically being fairly slender and agile for a superhero.

Final Thought:
Great start, if this is the direction this series is headed I will very much enjoy it. I’ve been waiting on trade paperbacks with Nightwing but man, I might step it up and buy single issues with this team, I knew I should have been buying singles! Anyway, you want this book, you’ll like it.