I Disconnect From You (Nightwing The New Order #5 Comic Review) 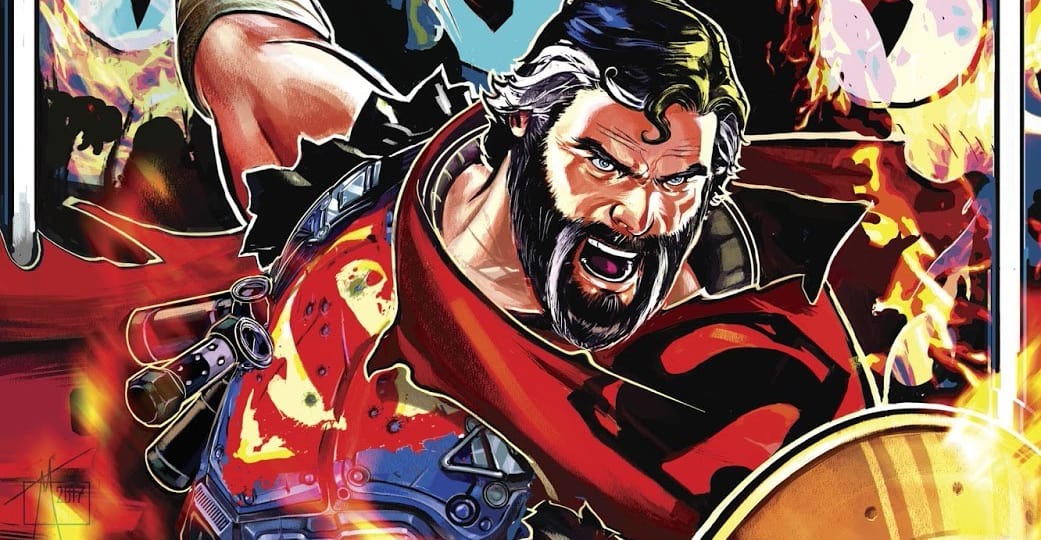 Our story takes place in a dark and dreary future, superpowers have been outlawed, many heroes are dead or depowered, the culprit and poster boy of the Our Heroes Are Human movement? Nightwing! 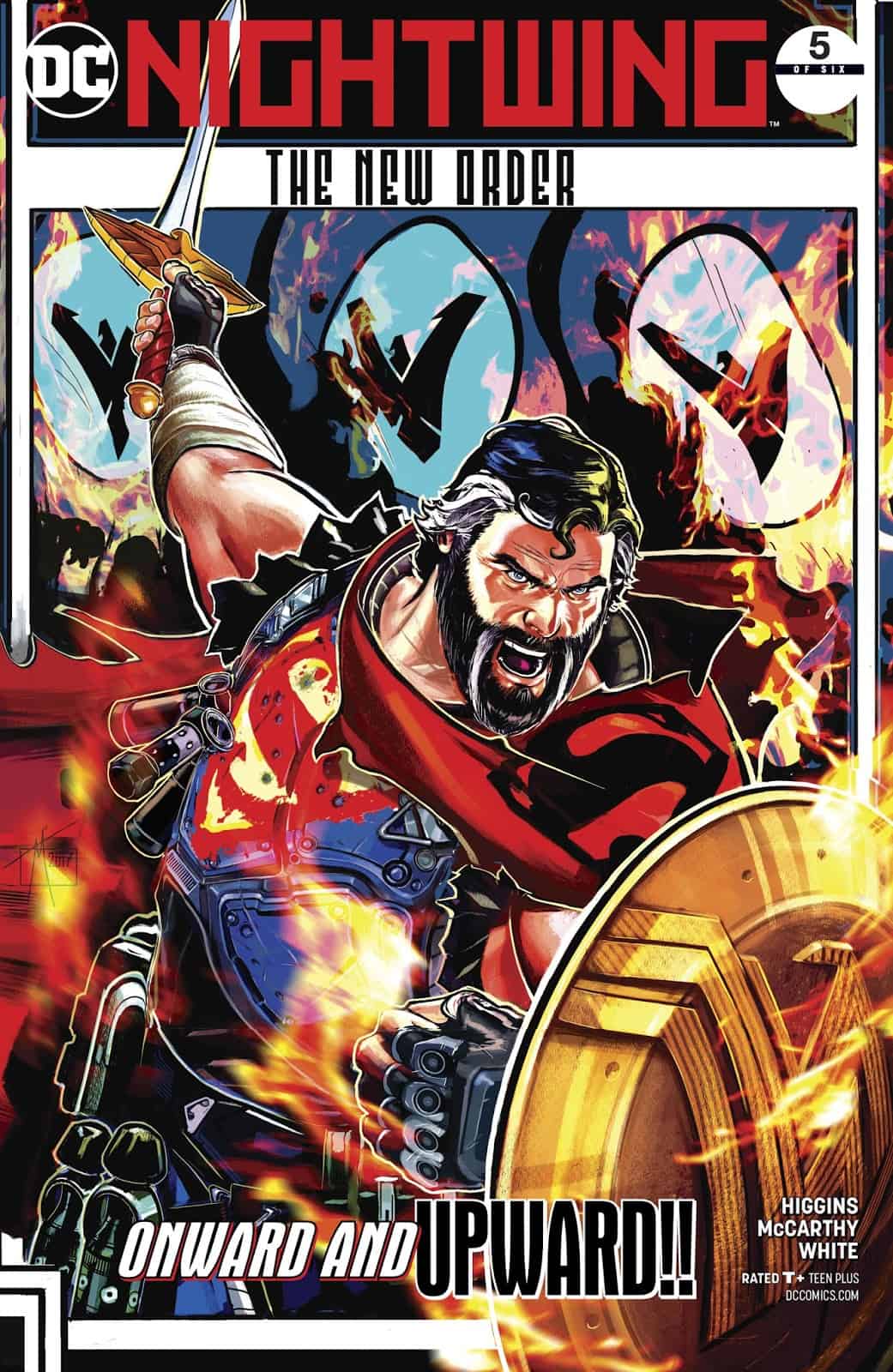 What You Need to Know:
“Weapons” -superpowered humans, have been outlawed following some cataclysmic event suffered, which hasn’t been revealed yet. The figurehead of the entire movement was an unmasked Dick Grayson, leading an anti-superhuman law enforcement agency called the Crusaders. Wielding superpower dampening tools and throwing Weapons in cryostasis with the help of Mr. Freeze, many heroes are depowered or in hiding.

Dick’s life is turned upside down when his son is revealed to have superpowers, just like his mother, Starfire! Now Dick has had to turn to the former heroes he was hunting only days before to get his son out of Crusader custody and find some help in an underground movement in Metropolis, this is not one to be missed!

What You’ll Find Out:
Gotham City: 2040
We open on Kate Kane (formerly Batwoman, now head of the Crusaders) questioning Liz, the Titan resistance’s mole in the Crusader organization, she reveals the organization has been tapping everyone’s phones, personal and professional, and she knows that Liz has been feeding the resistance information. Suddenly she realizes Liz is stalling for something and calls for backup, Dick Grayson is in the lab, and he’s not alone!

We cut to Freeze’s lab, he has neutralized some of the Titans and has Dick and Kory’s son, Jake. He assures the former spouses that their son is being well taken care of, he’s just trying to help. Kory tells Dick to close his eyes and blasts Freeze clear across the room. Suddenly the Crusaders burst in and a huge battle you should discover for yourself takes place, the finale is spectacular! 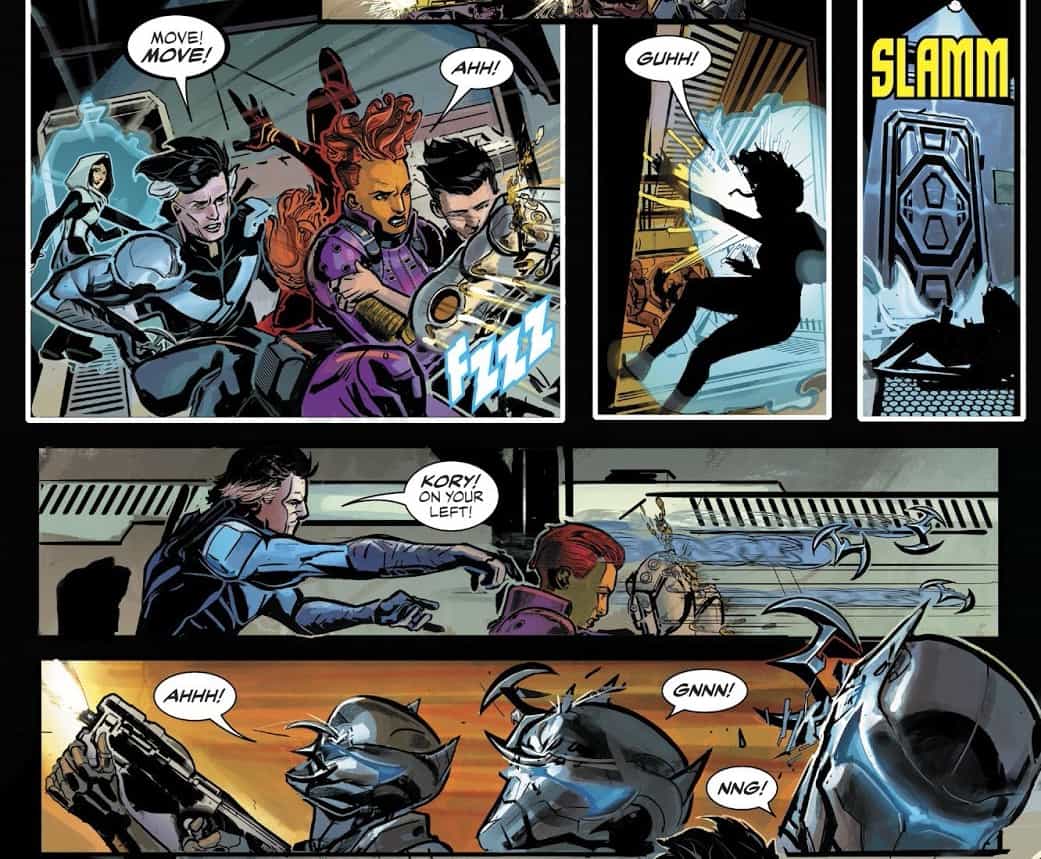 The team makes it to the new Titans headquarters in Blüdhaven, Dick tries to leave with Jake, he wants to flee to a country with no anti superpower laws like Russia or Italy. Cyborg calls him a hypocrite and Kori tries to implore him as Jake’s mother. Dick tells Kory she doesn’t get to dictate Jake’s life since she abandoned them. Jake pipes in, he doesn’t want to leave. Dick protests and Lois knocks him out with the ring (she’s a blue lantern now)

Dick wakes up in a car on the way to Metropolis, they are going to find the underground movement. As they arrive they are attacked by a gang of miscreants, THIS LOOKS LIKE A JOB FOR SUPERMAN!!!!!!!! 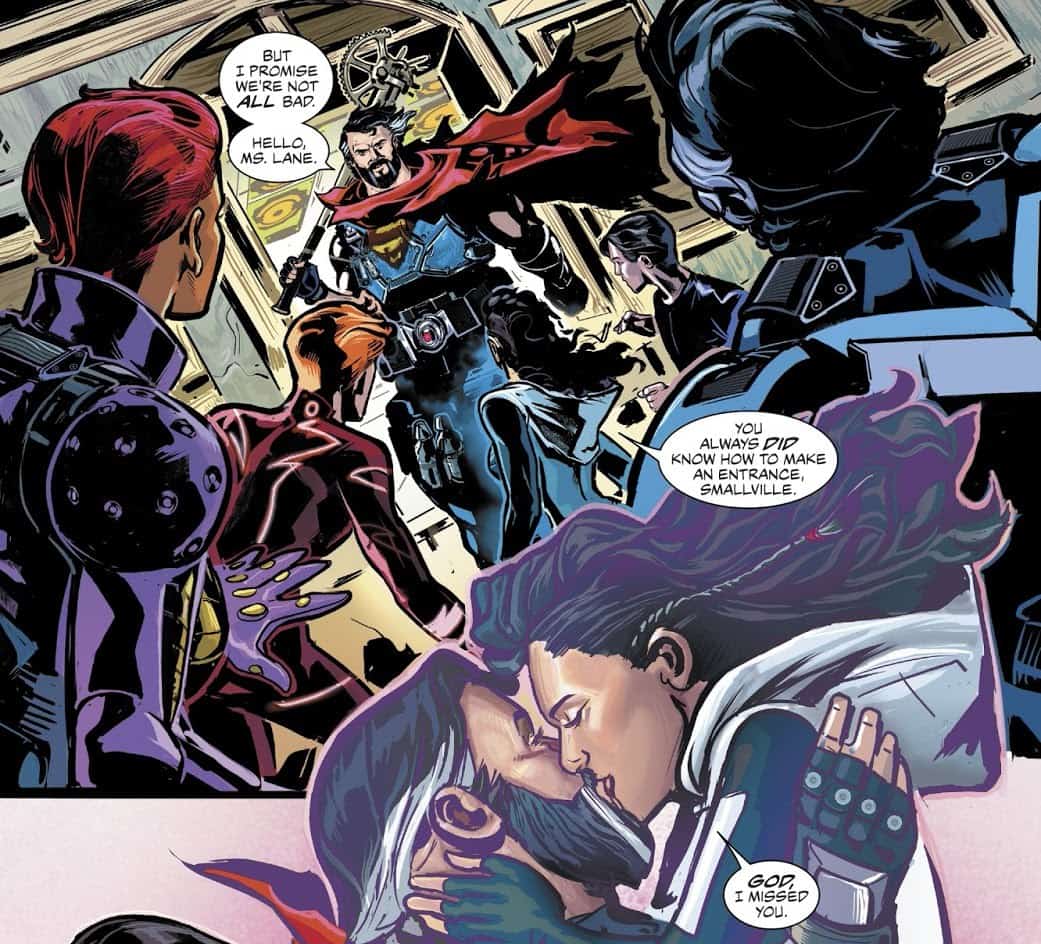 I could friggin cry

Does Superman manage to save the group with no powers? Is some insane stuff revealed? Does a member of the team betray them all, potentially destroying everything? Yes to all! Read this issue! Buy this issue! Go to the store and buy this issue, then read it!

You mean besides my freaking brain embolism at the sight of Superman’s new costume?

Plot:
I loved this issue, it completely took last issues mid mini-slump and kicked it square in the face! The opening was amazing and the world building employed even at this point is so great! I can’t believe there’s only one issue left in this stellar series. As anybody who knows me knows I am admittedly a sucker for alternate future stories, although not a kingdom come by any means I would consider it on a level with something like Days of Future Past (by which I mean awesome, but not life changing)

I loved the mid-battle scene with Lois and her ring, and as I said the finale to the battle had like 4 simultaneous events that were all great. The action scenes this issue are a real improvement from last issue, and the Superman reveal was incredible. Even with Superman on the cover, I was incredibly excited when he showed up in the issue, his new ally is both unexpected and inspired, not to mention we finally found out what happened to Batman!

The betrayal was kind of expected, being teased often throughout the series in a way now that it’s happened. Still, a nice touch. I cannot wait for the finale next issue.
One weird thing I noticed is an almost complete lack of conjunctions from anyone other than Dick (e.g. can’t-cannot) at one point in the story, I’m curious if it means something. I might have to reread the series now.

Art:
The art this issue was a marked improvement from last issue (the low point in the series in my opinion, sorry) I loved all the dynamic scenes and the character designs have been killer, Superman’s new look might be a new favorite particularly, although it is a bit reminiscent of a story from the 90s, Superman At World’s End, it ended with bearded superman and the biggest gun Rob Leifield ever dreamed about. I think these characters look better moving than not but the backgrounds have been detailed and interesting, it’s one of the rare times I almost wish there was more exposition, this series is almost over!

Final Thought:
Nearly a perfect issue, no real complaints besides the fact this series is almost over, I hope some continuation of this series happens, maybe next year. I can’t believe how much fun this mini has been!