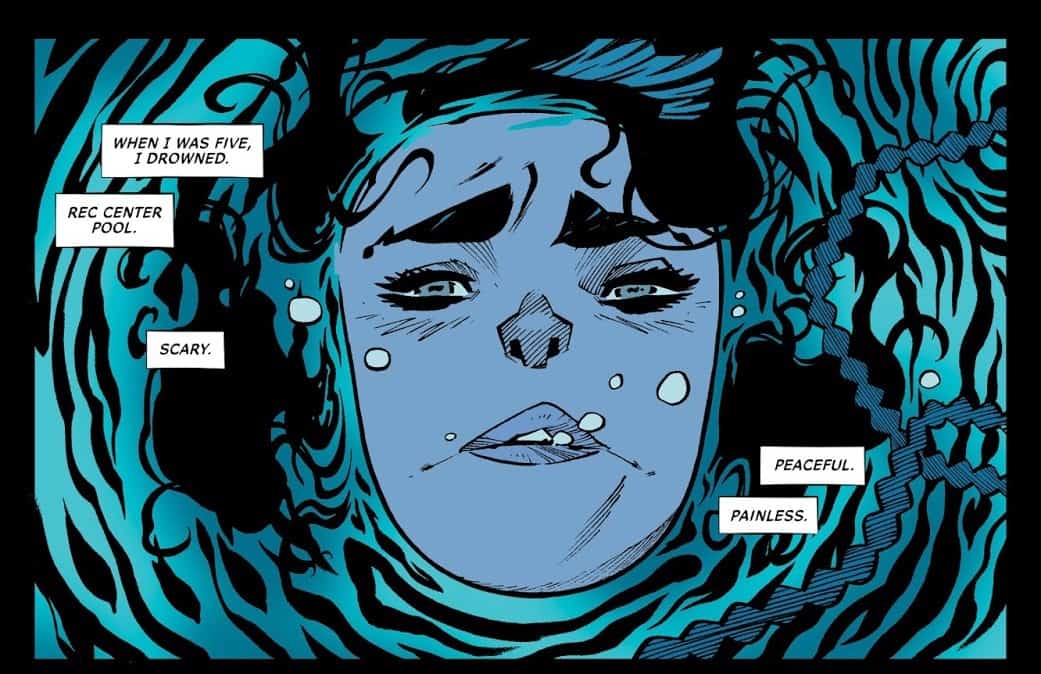 Nash is starting to lose her mind under the stress of her downward spiral. Meanwhile, Jad, riddled with guilt, has decided that it’s time to come clean. 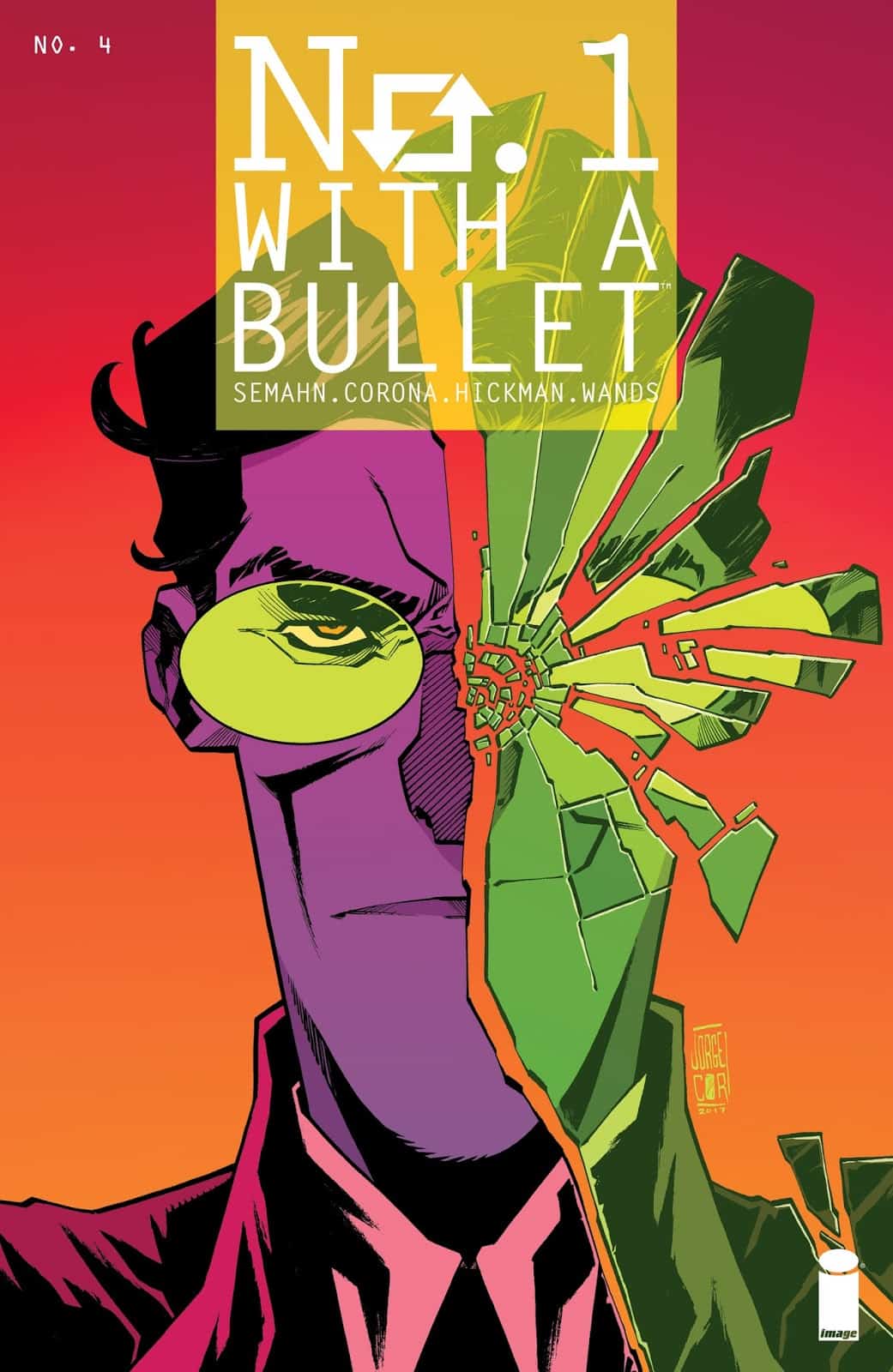 What You Need To Know:
In the not too distant future, a social media addicted 20-something named Nash Huang deals with an internet hacker, who has released a non-consensual sex tape to the world. In the fallout of the sex tape scandal, her girlfriend has left her, she’s been fired, and the entire world looks at her in new and gross ways. After feeling she shouldn’t have to bear the burden of shame alone, Nash admits in a live stream that her former boss, Jad Davies, was the creator of the recording. After realizing her confession was encroached upon by a mysterious figure peeking out of her closet, she finds that someone has broken into her home and left a cryptic message on her wall.

After reporting the incident, Nash’s stalker is investigated by a detective named Grover. Meanwhile, media reaction to Jad’s involvement with the scandal has left him legendary. Jad’s PR manager couldn’t be happier about it, but Jad is having some mixed feelings.

Nash’s friend Rico decides to take her to the Museum of Death, where Nash experiences a hallucination of the Black Dahlia and accidentally destroys half the museum. The cops are called and Nash and Rico are put in cuffs.

What You’ll Find Out:
Jad rehearses his statement for a special taping of his show. He is ready to confess to the world that the recording that was released of Nash was not consensually agreed upon. His producer and lawyer tell him that this confession is a bad move, and pressure him by assuring this will end his career and leave his entire crew unemployed. But Jad, believing that he needs to do this so he can look in the mirror each day, decides he will do it regardless.

Meanwhile, after being detained for her accidental destruction of the Death Museum, Nash sits, handcuffed, on a busy street. Passersby recognize Nash and snap pictures while she tries to hide her face and avoid any more unwanted attention. Nash worries the stress of the whole thing is beginning to make her crack. Detective Grover bails Nash out, asking her when the last time she saw her ex-girlfriend was, and she figures it’s been a few weeks. Nash cracks an inappropriate joke and Rico, worried Nash is losing her mind, gets her to his apartment.

Jad is in makeup readying to tape his prepared statement. His crew, clearly not happy with his choice, treats him with disdain. His ex-wife calls refusing to take no for an answer from Jad’s new assistant. Cynthia chastises Jad for his latest scandal and how it has led to his son being beaten up and bullied in school. Jad apologizes but says he will make things right, and assures her she doesn’t need to worry much longer.

At Rico’s, Nash takes a moment to herself, remembering a time she drowned when she was younger. She remembers how it felt: painless, peaceful, but scary. Nash starts to feel like she is hallucinating again, and leaves the bathroom to find Rico, who expresses his concern for her well-being. Jad’s taping comes on the TV and Nash and Rico watch. Nash hallucinates in tandem with the recording. While Jad gives his statement, Nash imagines the subtext of his blame being put on her. In the final moments of his prepared statement, Jad changes his story to say that the recording was consensual and that Nash knew it was taking place. Nash, freaking out, storms out of Rico’s apartment. Grover notices a shadowy figure near Rico’s apartment. Thinking it’s Nash, he follows and winds up in a dark alley, where he is attacked.

The media reaction to Jad’s statement is mixed. Some people are starting to see through Jad’s facade, while others excuse his actions with the classic “boys will be boys.” Nash wakes up later that night on her front lawn to sprinklers. Her neighbor tells her to stop acting like a fool if she doesn’t want scandal to continue to follow her, to which Nash raises her middle finger. 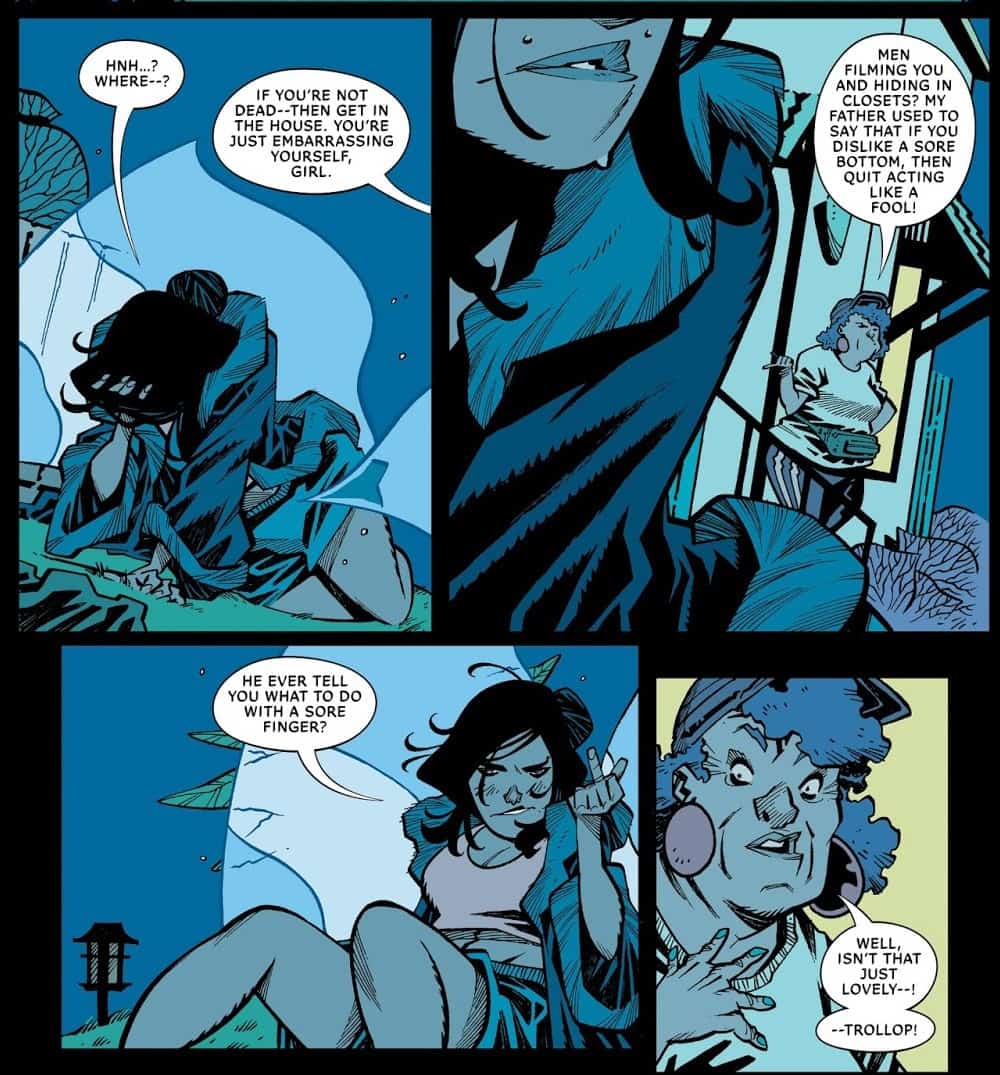 Later, at his home, Jad is praised for his decision to save the show, and himself, by his PR manager. Receiving a text that appears to be from his ex-wife, he decides to go over for a visit. The display on his car flickerers and glitches as he navigates the course of the cliffside roads. Nash, sitting at home, creates a poll on social media asking what Jad should do next now that he’s ruined her life yet again. Her initial reaction is to tell Jad to die. As Nash is at home sulking at her continued tragedy and anger, Jad loses control of his car and flies off an embankment.

What Just Happened?
Nash has been almost completely run down at this point. We are starting to see her pushed to her breaking point. The hallucinations from the last issue notwithstanding, she’s starting to make jokes and crack up about her situation. Her mood is clearly unstable as she has to deal with people constantly judging her for her actions. Even detective Grover, entrusted with the job to protect her, continues to assault her with microaggressions relating to her gender and race. When Nash tries to call him out on his behavior, he is quick to deflect.

The issue takes a personal look at Jad and his part in the scandal. The immense amount of pressure from his director, lawyer, PR manager, and ex-wife, has caused him to alter his confession in order to save the jobs and livelihood of those around him. Put into these impossible situations, it’s not necessarily surprising that Jad has found it hard to do the right thing. We are almost made to sympathize with his conundrum through the constant pressure put upon him. 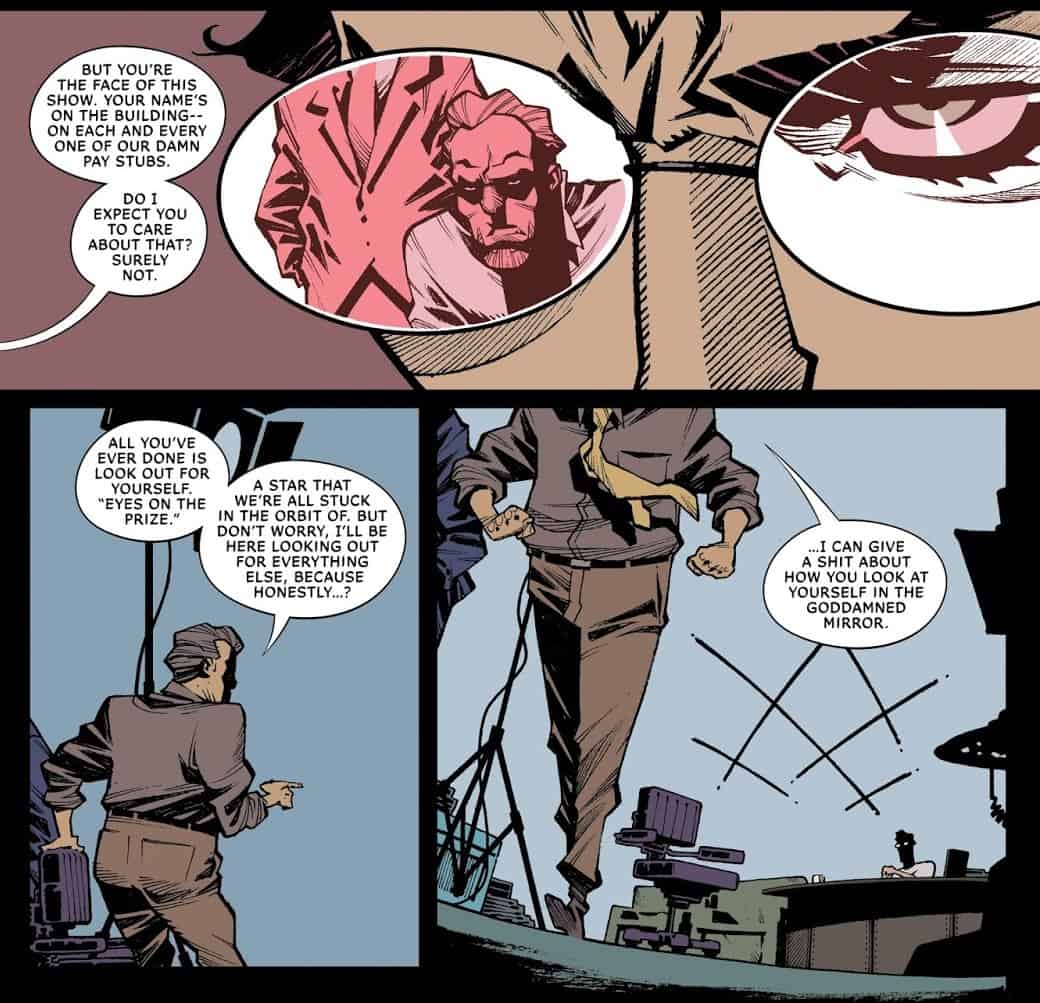 The confession ultimately leads Nash to another hallucination that suggests she may have had something to do with the previously visited plight of Teresa from issue two. It will be interesting to see if this fleshes out into a guilt trip that may lead Nash to become a defender for people that are bullied and demeaned online through sexual revenge.

The stark contrast between the situations of Jad and Nash are playing out. Jad is becoming a star on the rise due to his involvement, while Nash is constantly belittled and degraded for her’s. Although Jad is taking a stance to protect himself and those he loves and employs, the guilt he feels is sure to come out in other ways. That is to say, if he lives through the hacker trying to kill him.

Final Thought: No 1 With a Bullet never disappoints on its social commentaries. Acknowledging that much of the abuse in the book’s plot is related to influence is a poignant aspect of the book’s themes. The constant descent of our hero Nash while her former boss seems to be on the rise becomes even more harrowing as we inch forward to an explosive climax.